Am I the only one who experiences a weird mixture of euphoria and debilitating analysis paralysis when presented with, oh, let’s say 41, slight variations on the same product to choose between? It’s like when you go to the grocery store just wanting some Cheez-Its, but then when you get to the crackers section, you have to pick between 16 different flavors.

On that note, friends, the new Exped Ultra 3R Sleeping Pad is here to join the brand’s fairly crowded field of sleeping pad options. It totes many of the tried-and-true features you would expect from a sleeping pad and doesn’t take too many risks. It is a slightly more affordable alternative to some of the higher-end stuff, though, so let’s see if it’s worth the savings. 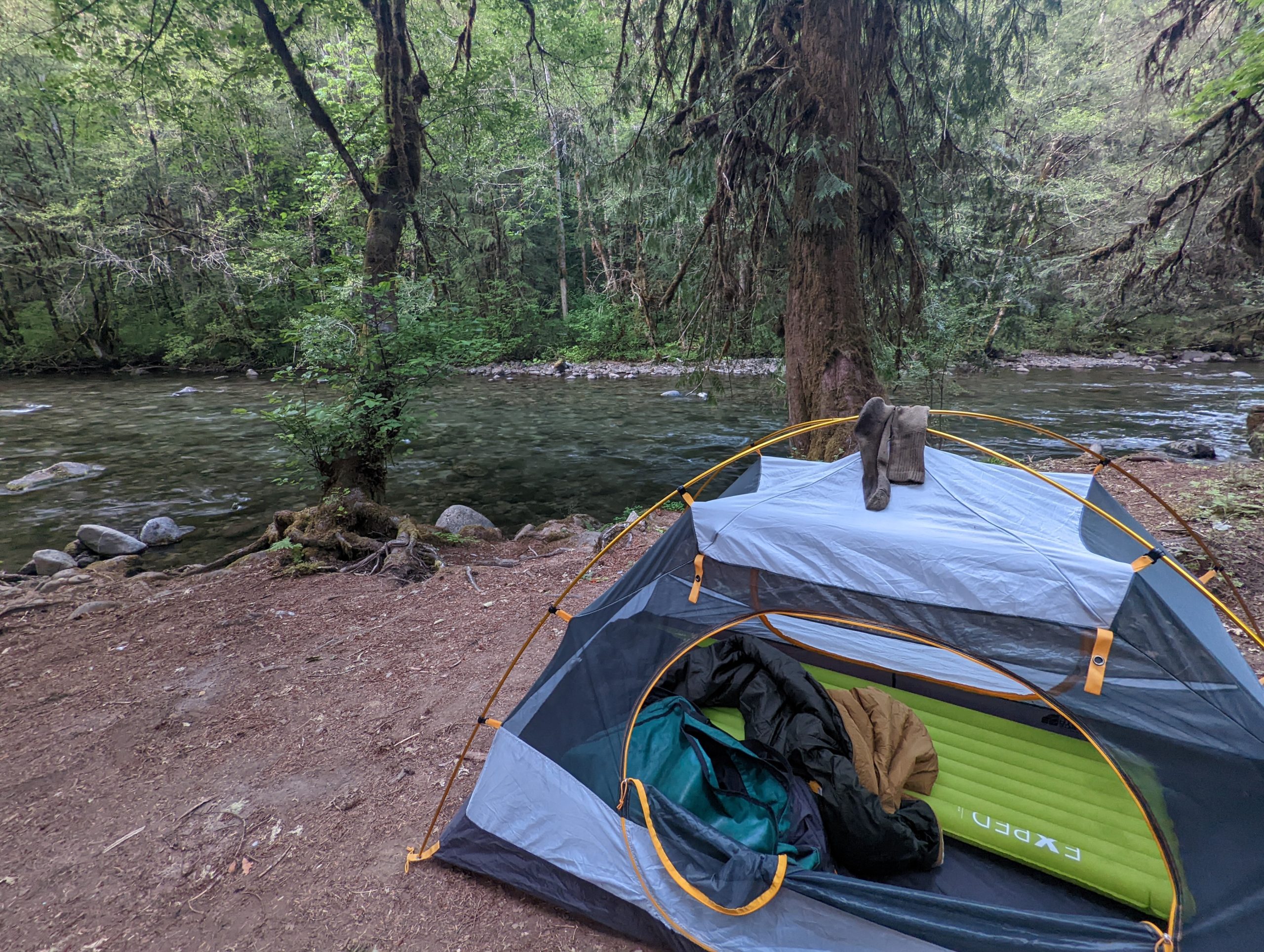 Don’t act like you’re not tempted to float that river with this thing.

I’m a hiker of an exceedingly average build (6’0″, 155lb.), and I’ve slept on the medium pad for right around 20 nights now. It’s been through some cold nights in the 30s in three different mountain ranges of Washington and Oregon, as well as seeing its fair share of warmer summer nights in the 60s in the Oregon lowlands. I slept in my birthday suit on this bad boy a few nights, and other nights I had it paired with my Enlightened Equipment Revelation 20.

The medium size is the exact same length and width as a Therm-a-Rest Z-lite Sol. Tenacious Tape hotfix patch not included.

Vertical Baffles: As opposed to the horizontal baffles of the more popular Nemo Tensor and Therm-a-Rest NeoAir X-lite. This design choice is said to expand the pad’s life by reducing “end-of-baffle welds.” The welds that seal the end of each baffle are typical weak points on the pad. The Ultra 3R has just eight long vertical baffles rather than dozens of short, horizontal ones and is theoretically less leak-prone as a result.

Two Flat Valves: One for inflation and one for deflation as opposed to a singular valve that sticks out. This design is said to expedite inflation and deflation. I suppose it did, slightly.

“Schnozzle” Pump Bag: A 2.1oz sack for fast, convenient inflation that I also used as the stuff sack.

Sustainable: Exped prides itself on being a carbon-neutral brand, and many parts of this mat are made from recycled materials and PET bottles. The rest is bluesign certified.

This is a solid 3-season sleeping pad. The R-value of 2.9 places it a notch above closed-cell foam pads, but a firm notch or two below the more insulated pads like the Insulated Nemo Tensor or NeoAir Xtherm (R-4.2 and 6.9, respectively). It keeps you well off the ground, and the vertical baffles sort of curve up to provide a bit of extra insulation if it’s a particularly chilly night. Twenty-denier fabric isn’t the most durable material, so I wouldn’t recommend anything besides an established campsite for this pad, with a good footprint/ground sheet below it. 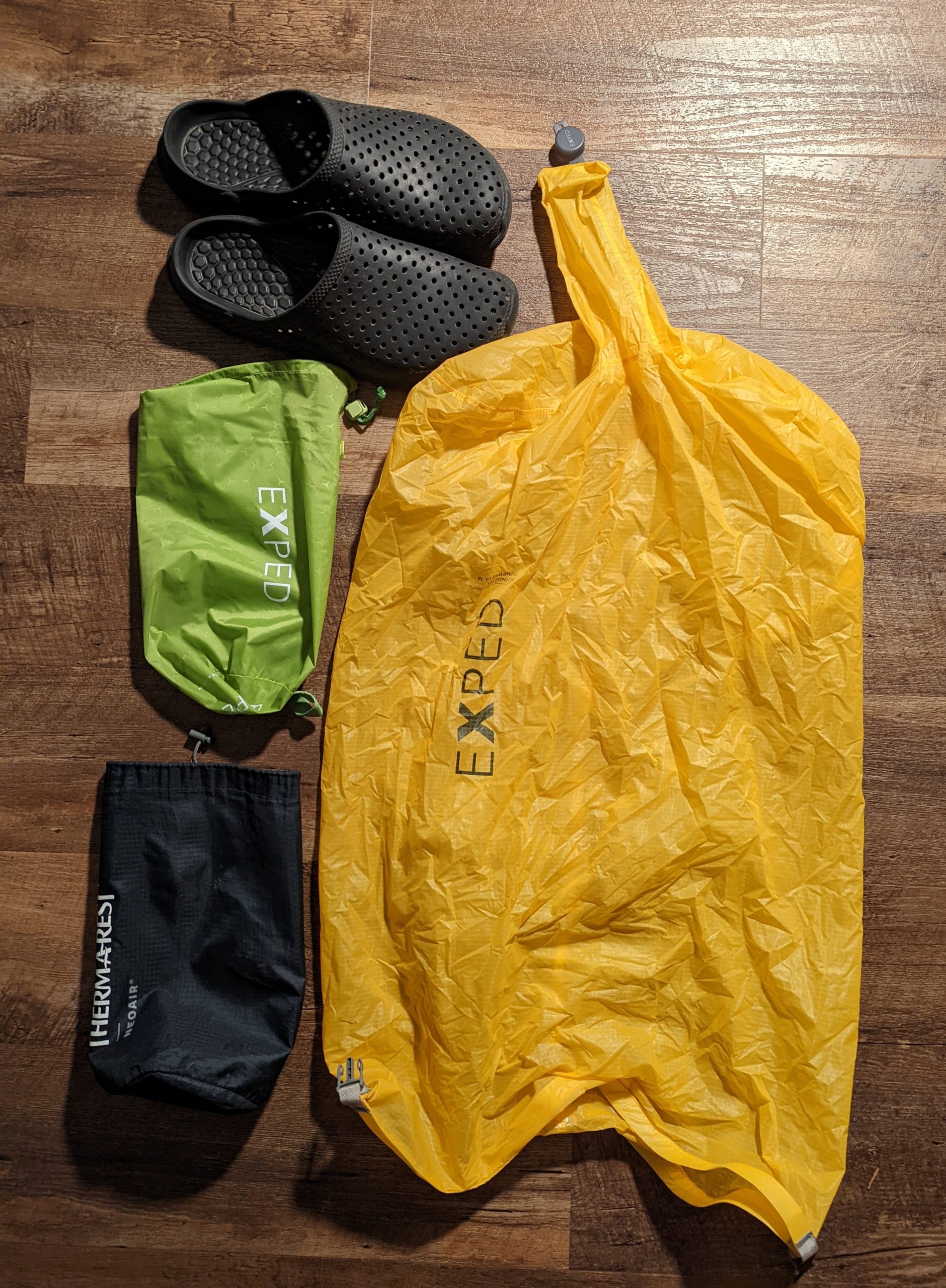 You can use the “schnozzle” (pump sack), or leave it behind to save weight. Packs down to the same size as a NeoAir.

Goldilocks Insulation: It’s neither too warm nor too cold. Great for summer camping or shoulder season trips when paired with a warmer bag.

Compact: This pad uses space well. My feet didn’t hang off the end either, which I appreciate.

Quiet: I think this might actually be the quietest inflatable sleeping pad I’ve slept on. Of course it makes some noise, but it’s definitely not as loud as the NeoAir or the Nemo.

Variety of Options: I guess this is a plus, but it could also be a minus if you are the type of person who, when faced with too many decisions, becomes more indecisive.

Two Valves: I’m all about simplicity. I’ve been a one valve man for most of my life, but I can see the appeal of two valves. Honestly, it’s not a deal breaker to me, but I suppose it did slightly speed up both inflation (as long as you use the schnozzle) and deflation.

I don’t know what on earth I’m supposed to do with those extra 15 seconds I saved, though. And ultimately, are those precious seconds worth the extra weight of the second valve—or the risk of having one more feature that could potentially break? For instance, I can already feel the…nipple(?)… on the inflation valve beginning to fail, and this pad has been inflated less than 30 times (more on that later). 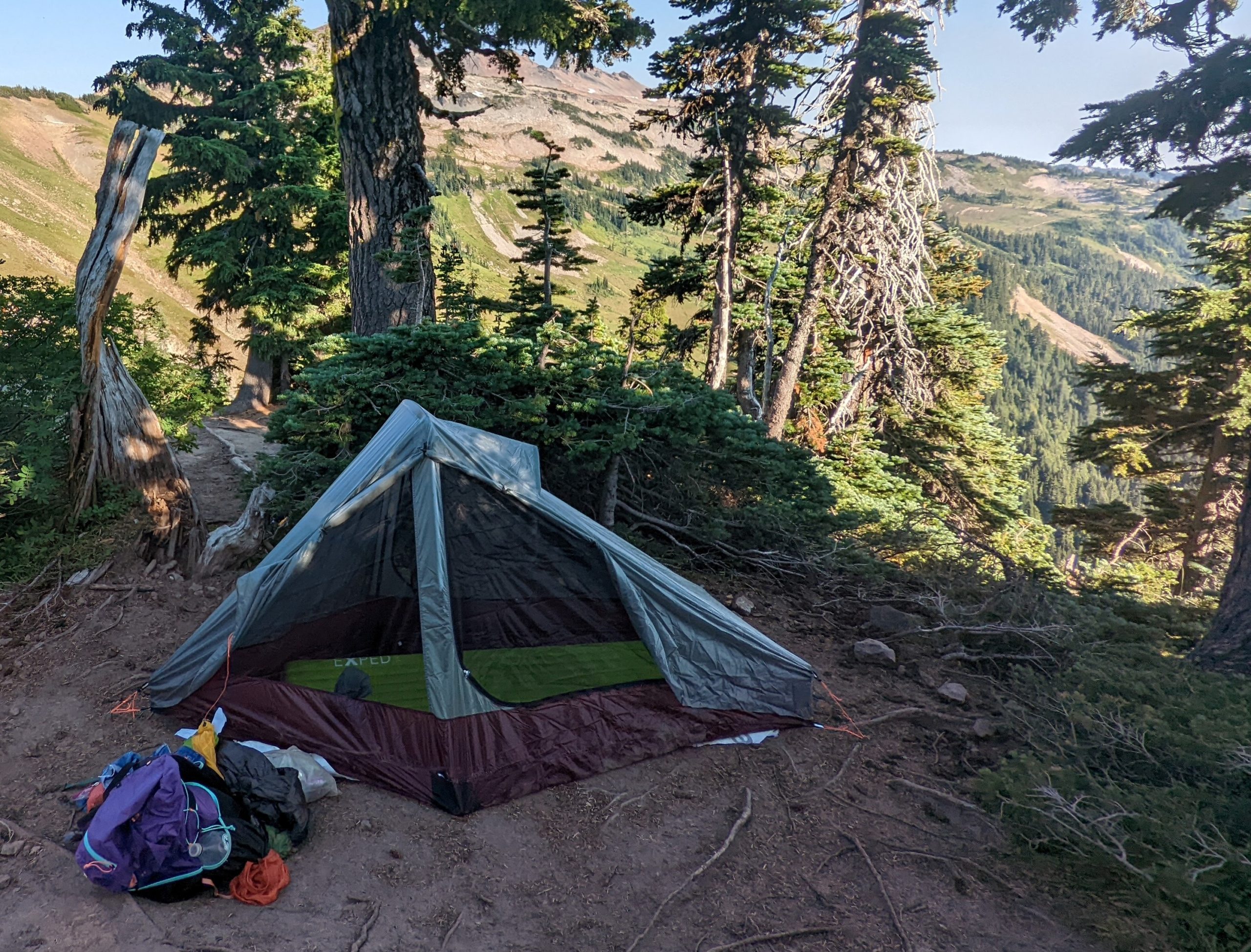 Great summer and shoulder season camping, and it fits in most regular-sized tents with room to spare.

Heavy-ish: The medium weighs 16 ounces without the pump sack, which isn’t an out-of-control weight by any means. But given the fact that it has a lower R-value than the lighter NeoAir and Insulated Tensor, I don’t feel like the weight is justified. Especially when you can go lighter AND easier with a closed-cell foam pad. The mummy version is only 13oz. but it doesn’t seem to be widely available and is still slightly heavier than others.

Not Insulated Enough: Yes, of course it’s true: the point is that this mat is less insulated—and therefore lighter—than its similar counterpart: the Exped Ultra 5R. The problem is that if you spend >$150 on a sleeping pad, you may as well get one that you know will be warm enough.  Even if it costs four ounces more.

Durability Issues: I knew that 20-denier fabric was going to mean a little bit more fragility than other materials, but I figured that since it’s recycled, it’s still cool. And it couldn’t be that bad, right? And truly, maybe it isn’t. But I still punctured this pad while cowboy camping on top of a Tyvek AND a Gossamer Gear Thinlight Pad. This was in an established campsite of dirt and regular pine duff, for reference.

Side note: this pad comes with a complimentary repair kit, but I’m lazy and went with the classic Tenacious Tape hotfix.

Also, the nipple(?) has begun to fail on the inflation valve, and sometimes starts to let air out as it’s inflating. It still works, though.

A Little More About Exped

Seeing as I’ve spent most of my career mindlessly kowtowing to most thru-hiker trends, I hadn’t heard of Exped until fairly recently. There’s no denying that they are a lesser-known brand compared to others mentioned here. But I found it interesting to learn that, back in the 90s, they were the first brand that instituted a rigorous use and adherence to the now-ubiquitous R-value insulation rating system.

Furthermore, I don’t want to harp too harshly on the plethora of options that Exped presents when it comes to sleeping pads. Some people enjoy that feeling of customization. Plus, the different types of mats/pads are broken down into three basic categories, which at least make logical sense: 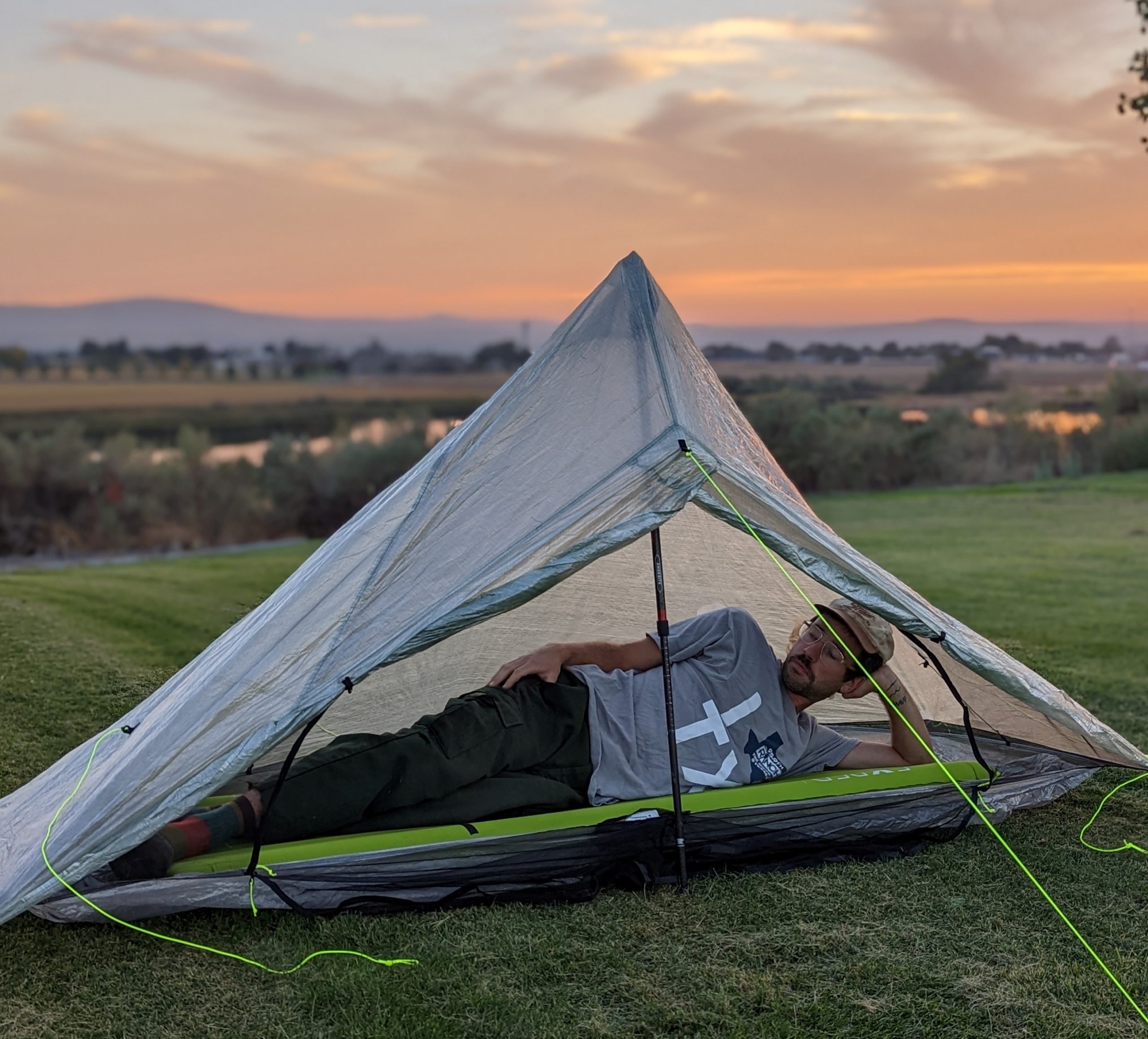 The Ultra pads fit nicely into solo shelters with room to spare on either end. You can also see that U-shaped action here, which keeps you on the pad pretty well.

Some of the issues I had with the Exped Ultra 3R may simply have been anecdotal–or even the result of user error, I can’t say for sure–and they might not fairly represent the quality of this product. Still, while this pad is objectively good at almost everything, it’s great at nothing. None of its features are top-of-the-line, and just about everything it does is done better by another company or another of Exped’s own models. That said, if you have a very particular set of desires for your sleeping pad, this may be the perfect option for you.

The Exped Ultra 3R was donated for purpose of review.