My boyfriend dropped me off at the Humpback Reservoir trailhead in Langford, where I had finished up the day before. We gave our hugs and said our goodbyes. then, I left him with his work and his studies and turned to the gradual incline of the wide gravel trail.

It’s sad to leave your special people for a while when you’re out doing your own thing and fulfilling your own goals, but I take comfort in our nightly satellite messages and the fact that it won’t be for too long. I’m grateful to have people around me who support me in pursuing my weird idea of fun (i.e., travelling long distances by foot).

The Sooke Hills Wilderness and Cowichan Valley Trails heading into Shawnigan Lake were prettier than I was expecting. The masses of green shrubbery were in full blast, rejoicing at the sunny day. The heat and the transpiration from the forest plants lining the sides of the trail created a humid leafy smell, just like how the inside of a butterfly garden feels. And indeed, there were many butterflies to be seen. Yellow, black and white, and even blue and orange. Flowers, slugs, birds and dragonflies – like walking through a narrow but fantastical fairy meadow. 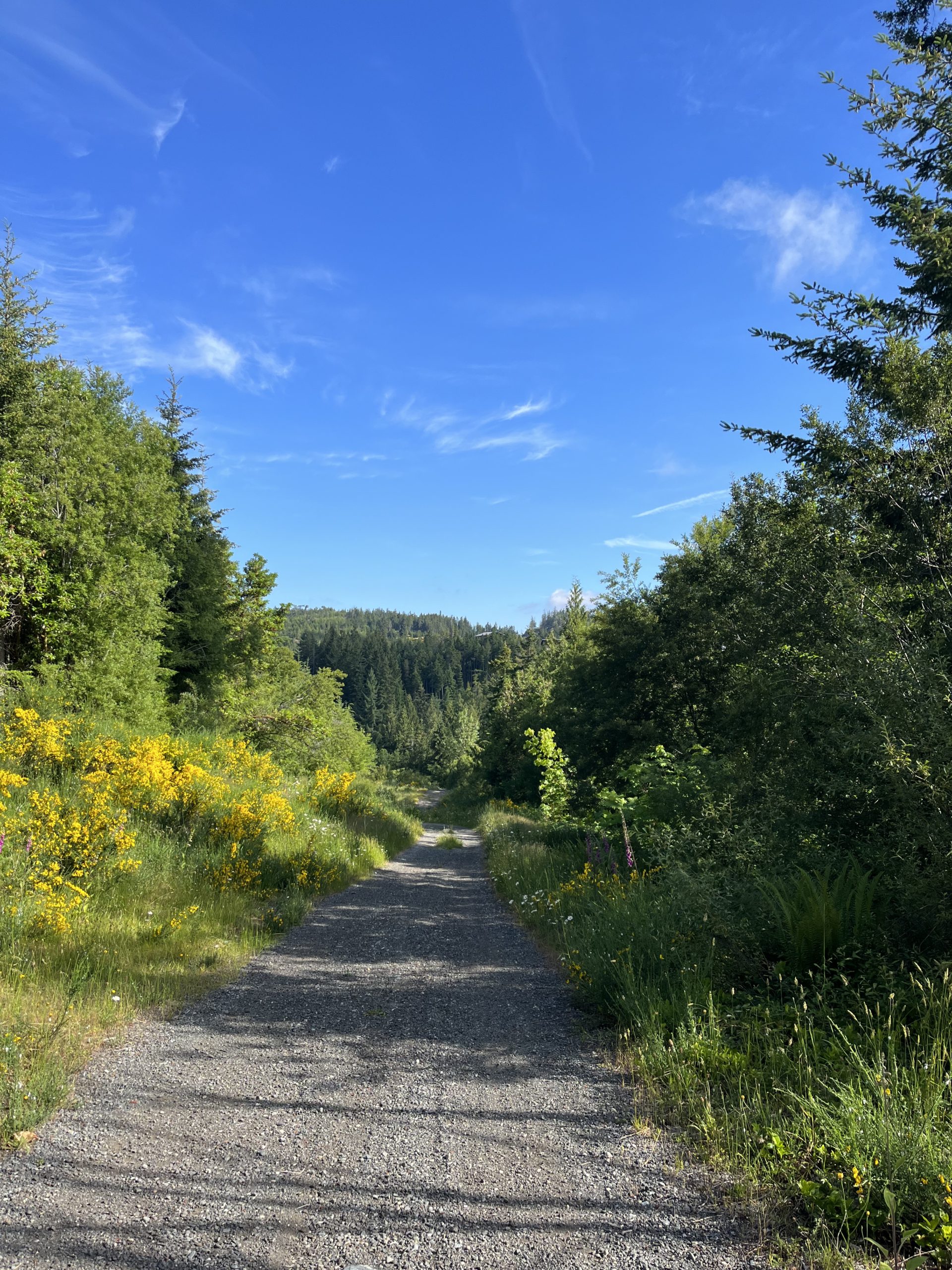 Though the immediate scenery of the trail was enchanting, there were no expansive views o be beheld. For some reason I was expecting to see across the Saanich Peninsule to the east on the way to Shawnigan Lake, but alas, only a wall of trees met my gaze in that direction. Even walking right alongside the lake for 10+ kms, I never saw it until i turned in to a little park on the water for a break. I was so hopeful about glimpsing water that I kept mistaking the blue tarps and shed roofs in peoples’ backyards as water. (For though the trail was pretty, the flatness of it at that point was a monotony that welcomed any distraction – at least, something more interesting to look at). 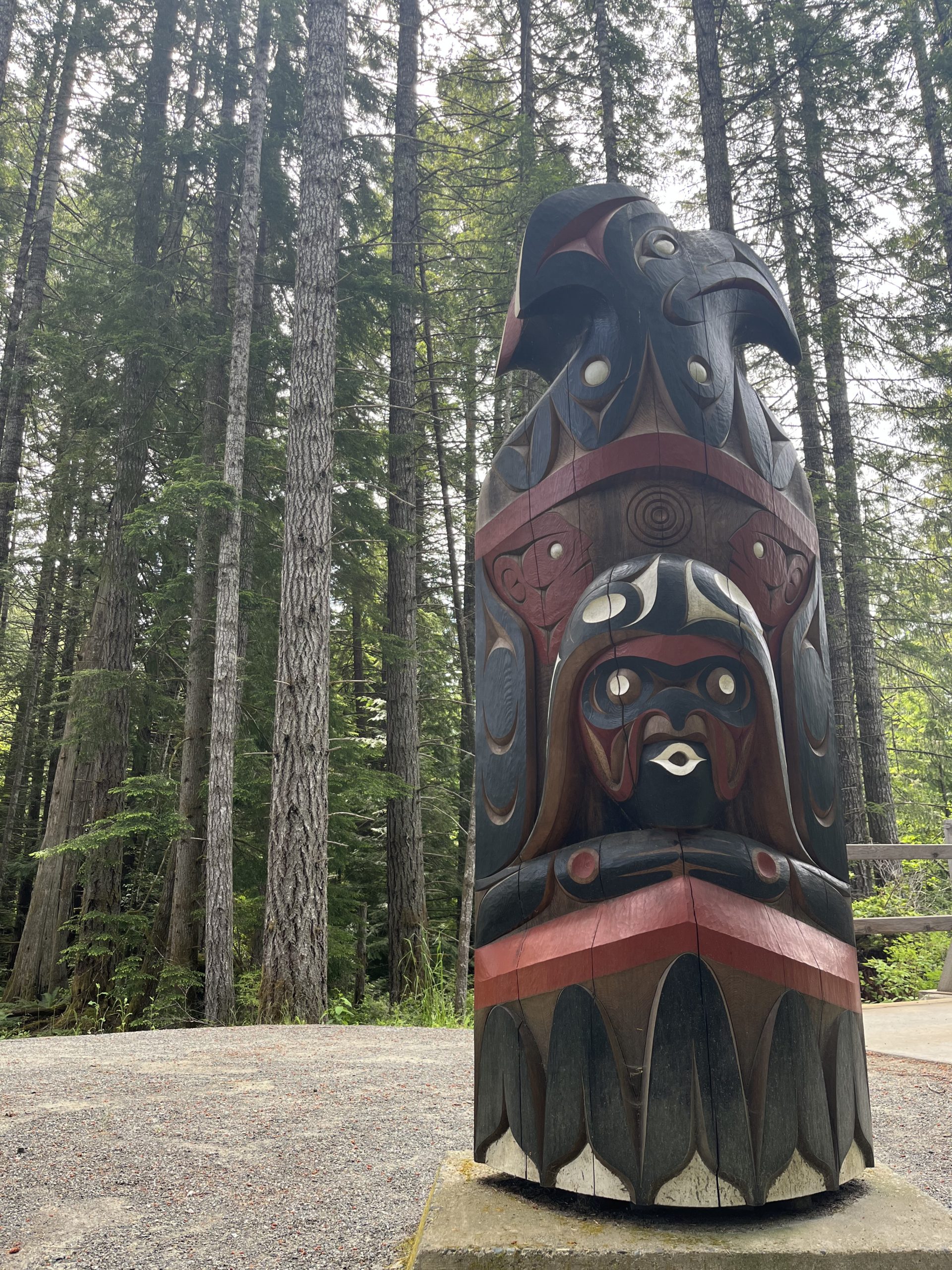 After about 27kms, I was starting to fade. taking an afternoon nap by the lake was exactly what I needed – I woke up refreshed and ready for the next 17kms I would be doing. Taking long breaks in the middle of the day is new for me. I’m usually the kind of person who books it to the destination for the day and then relaxes – I can’t chill if there’s still unfinished business in the day. But if I’m going to be walking for more than a month, taking more time during the day to rest might be a better strategy. And anyway, who doesn’t love a good nap on the grass in the sun? 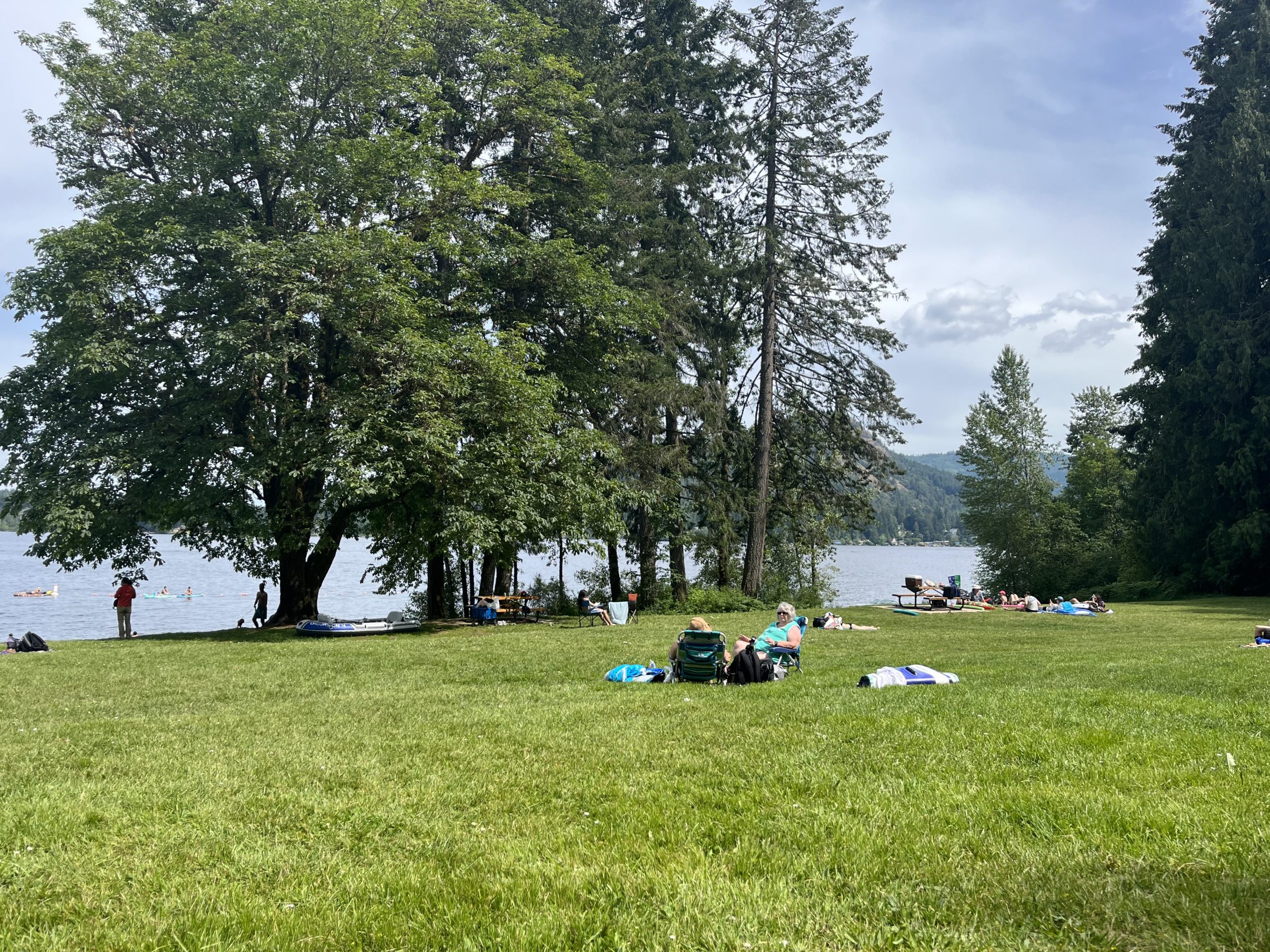 Night of the Roaring Bear

At around 8pm, I was tent chilling when I heard this terrible noise. It was like a wild animal yelling. My brain jumped right into my worst fears – those scary thoughts that I try to push to the back of my mind when I am solo camping. Was that a bear roaring? Am I camping in an angry bear’s territory? The intermittent roars, like foghorns, wouldn’t leave my paranoid mind alone. i was terrified – feeling the adrenaline pulse throughout my entire body. I prayed and focused on breathing deeply, knowing that I was the only one around who could bring myself back from the edge of a total freak out.

After a while, the noises seemed to be getting fainter. I resolved to stay put, even if I was in angry bear territory, because I was not about to pack up and start walking around past dark to find a new camp. What would the bear think if it saw my tent? Ignore or attack?

When I finally got to sleep (with my earplugs in), the bear haunted my dreams. It ate my food bag and slashed my tent. I chanted to myself, ‘I’m okay, I’m safe’ in an effort to make myself believe it.

The next day, I saw that a couple hundred meters past my campsite, the trail passed by farmland. Cows. Cows everywhere. Then I realized. The sounds I heard the night before were literally cows mooing. I can’t believe how much my brain must have distorted the noise to make it confirm my biggest fears. I can laugh now, but in the moment it definitely was not funny… 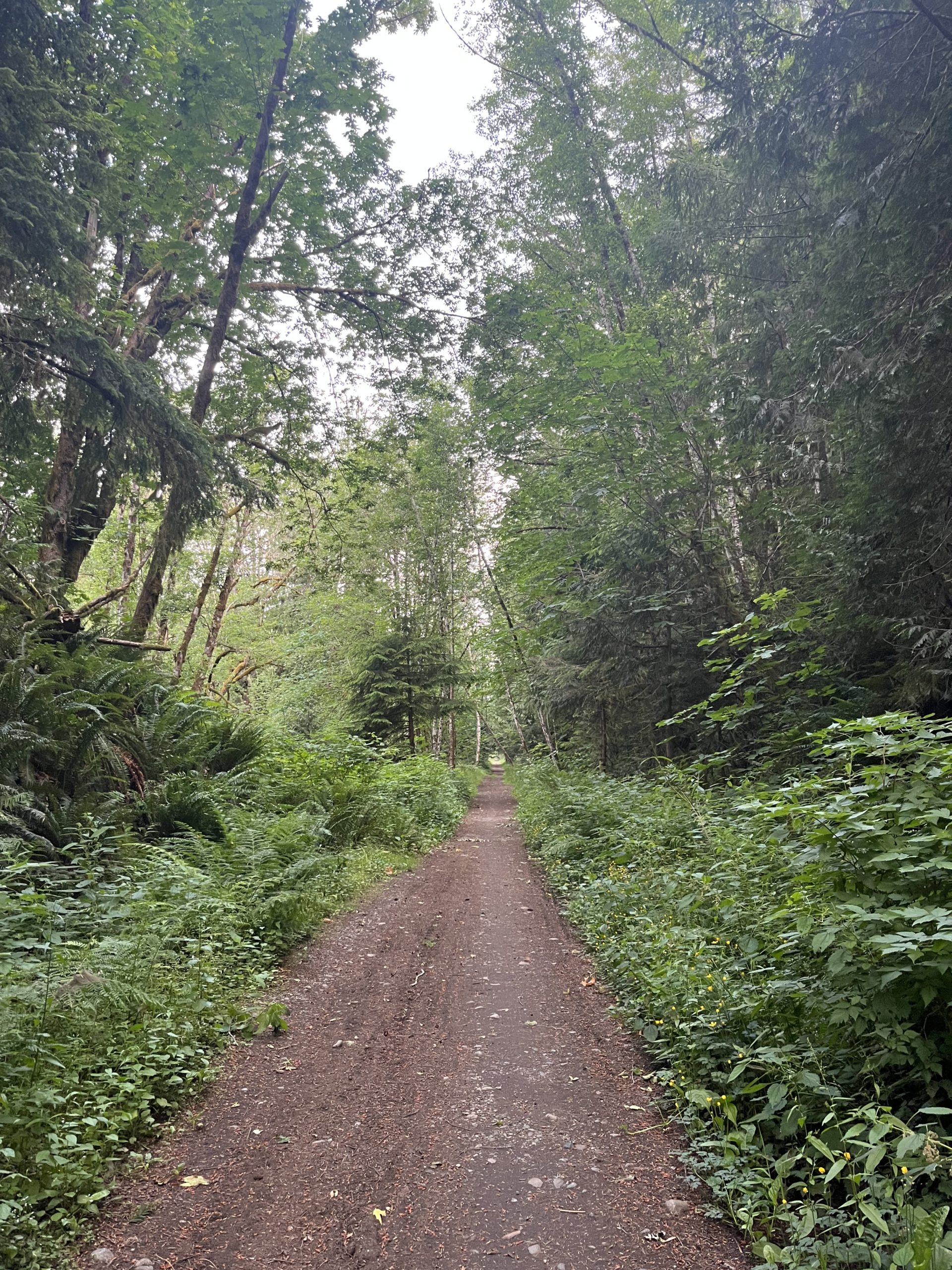 It was a flat green tunnel all the way to the shore of Lake Cowichan. Being an old railway grade, its straightness and flatness made sense. But it sucked to walk. With my feet sore and the weather turning rainy, I had to do something to stay motivated. I donned a nice pair of sunglasses I found on the side of the trail and plugged into my headphones, letting the music carry me into town. 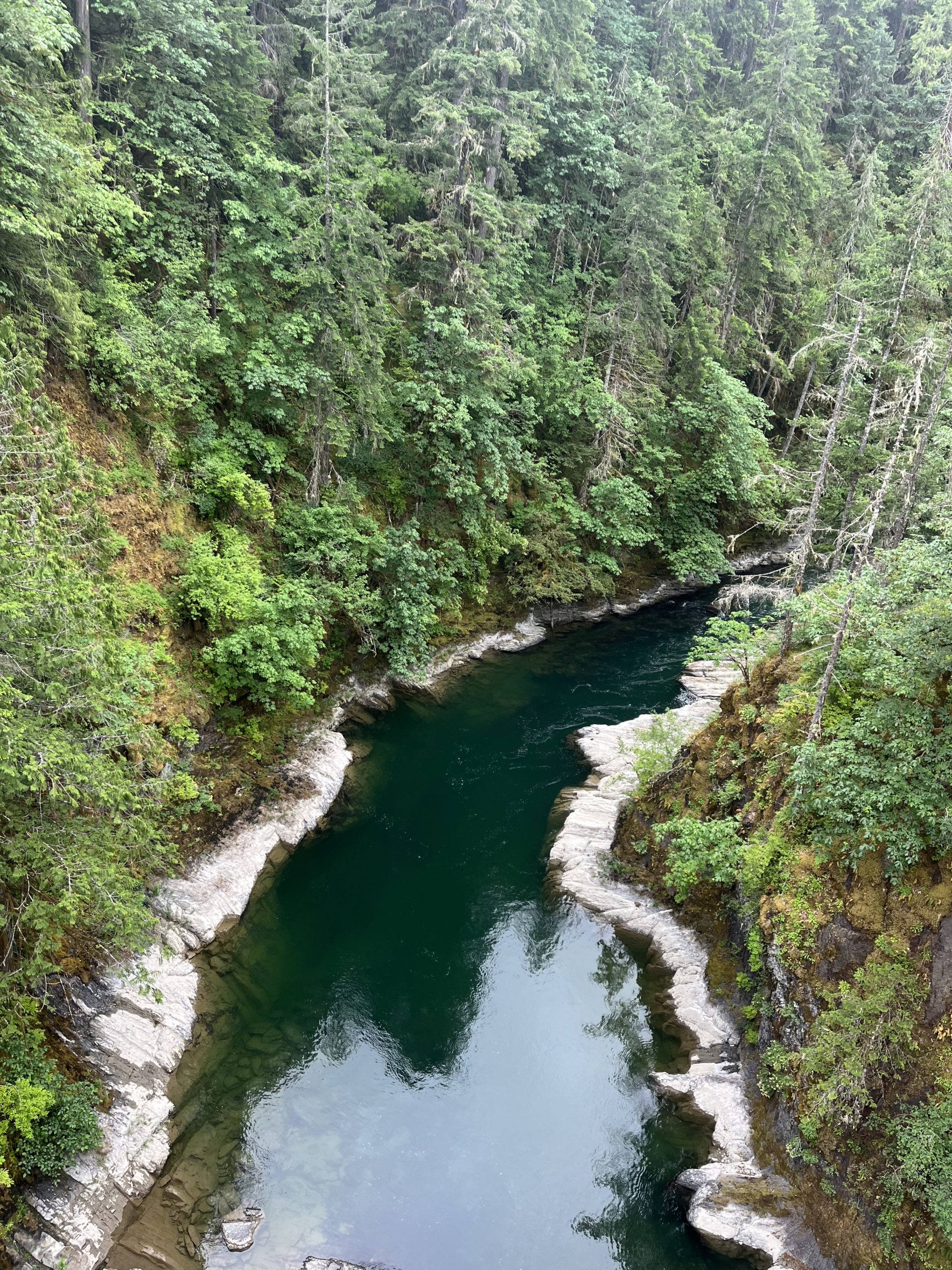 Well it was all green tunnel, except for the odd river crossing via railway trestle. Those were pretty!