Finishing the 48 4000-Footers of New Hampshire

Let me begin by saying I hate wind. I don’t like hiking in it, I don’t feel comfortable setting out on open trails in it, and even in mild temperatures I am not a fan of strong gusts of it.  I’ve been lucky to not have to brace many windy days on open trails in the White Mountains, however, I knew I had to start getting over my aversion to hiking in stronger winds.

Prior to finishing the 48 on Mt. Lafayette, I had faced some stronger (30/40mph) winds on a half dozen summits and although I didn’t enjoy the wind, I lived.  Looking at the higher summits forecast, I knew I was going to be facing some less than ideal conditions on my 48 finish. I knew the winds would be around 30/40mph, that I would probably be in the clouds, and that it would be cold.  But I was determined to finish, wind or no wind.  I told my husband that I would play it by ear and if I didn’t feel comfortable with the weather when I broke treeline, I would turn around. 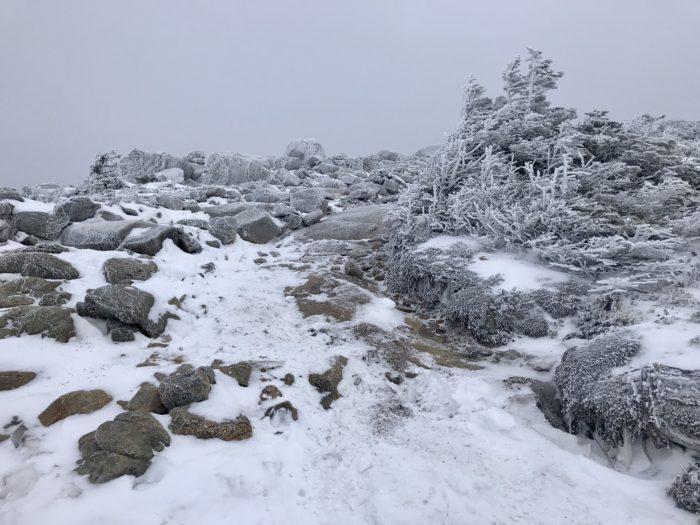 The summit of Little Haystack 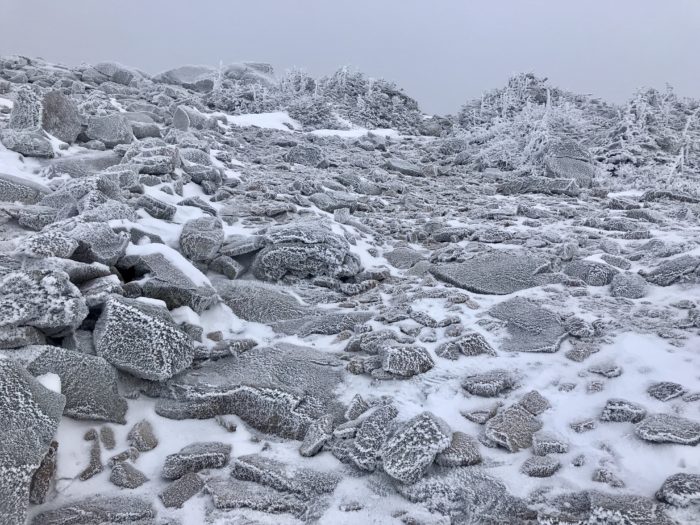 The summit of Little Haystack covered in rime ice

As I ascended Falling Waters Trail, heading toward the Franconia Ridge, I was greeted by gusts of wind and fast flowing, low lying clouds.  I purposely took my time making my ascent (I had just hiked Liberty and Flume the previous day and was a little sore), and as I gained elevation, began to add more layers to account for the drop in temperatures.  The trail was hard packed and although I brought along crampons, I ended up only wearing my microspikes all day.

There were a few other people on the trail that day, two young men were also making their ascent, and we greeted each other as our paths crossed near the summit of Little Haystack Mountain.  As I neared the summit and broke treeline the winds began to pick up. I had already spoken to a couple of other gentlemen making their descent about the ridge and what the weather was like up there. They assured me that I would be fine and that it wasn’t that windy. 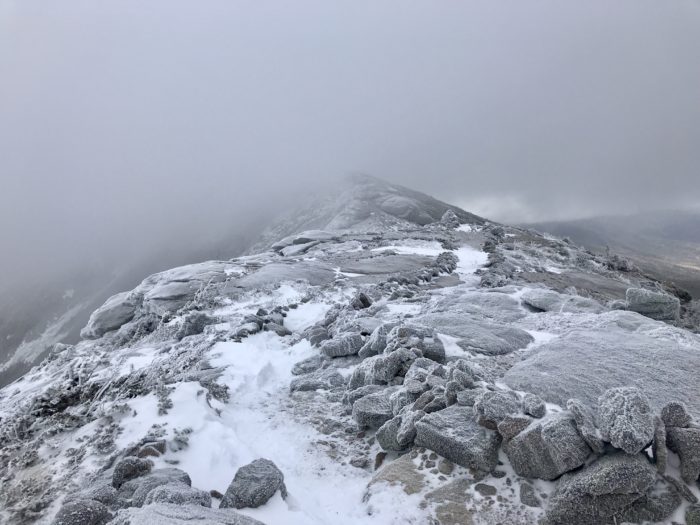 Looking north on the Franconia Ridge toward Lincoln and Lafayette 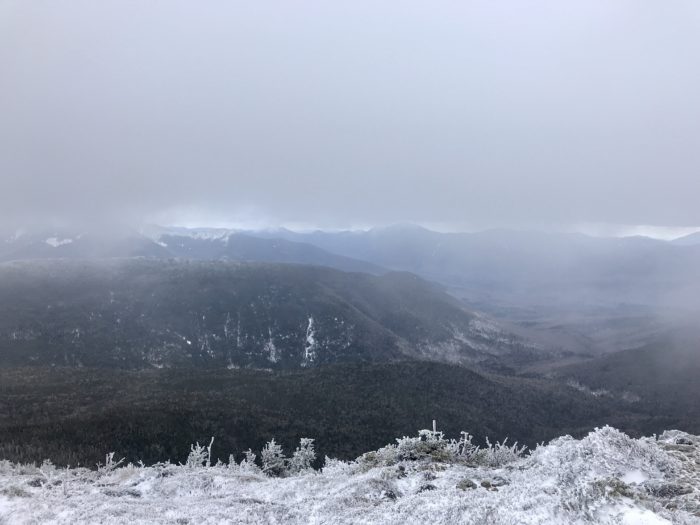 Owl’s Head from the Franconia Ridge 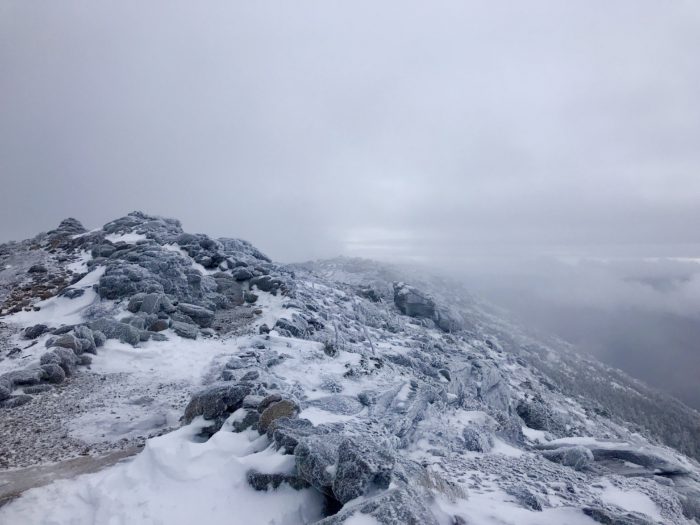 Looking south on the Franconia Ridge

Walking into the alpine zone in the winter is like entering another world.  The summit of Little Haystack Mountain was socked in and a layer of rime ice covered every surface.  I knew that if I was going to turn back, this was when I had to make that decision.  There are no places to bail out along the Franconia Ridge once you start along the trail until you reach the other side.  The ridge is completely exposed and I knew that if the weather turned, it was not someplace I would want to be.

As I stood on the summit of Little Haystack, I squared my shoulders, took a quick snapshot of myself, and pressed forward.

The two young men that had passed me on Falling Waters Trail bobbed along the ridge ahead of me.  I would look up every couple minutes to see their figures looming in the distance and as I pushed along the exposed ridge, stopping only a couple times to take a quick picture, their figures grew larger.  The winds would gust and I would have to stop and use my trekking poles to brace myself against the force trying to push me off the trail.  At every boulder or cairn large enough to block the wind, I would quickly stop to catch my breath, calm myself, and then step back out into the elements.

In the clouds and with limited visibility, I didn’t bother stopping, nor did I recognize amidst the endless boulder fields, the summit of Mount Lincoln.  I ended up catching up to the two men I had been following on the descent of what was probably Lincoln’s summit.  We started chatting a bit about whether or not that last high point was the summit.  There was one more ascent and descent over the unnamed peak between Lincoln and Lafayette.

During a quick break, I told the two young men that I was finishing my 48 that day on Lafayette.  They were happy for me and I asked if they would mind taking my picture.  They happily agreed and we set out again to make the final ascent to the summit of Lafayette. 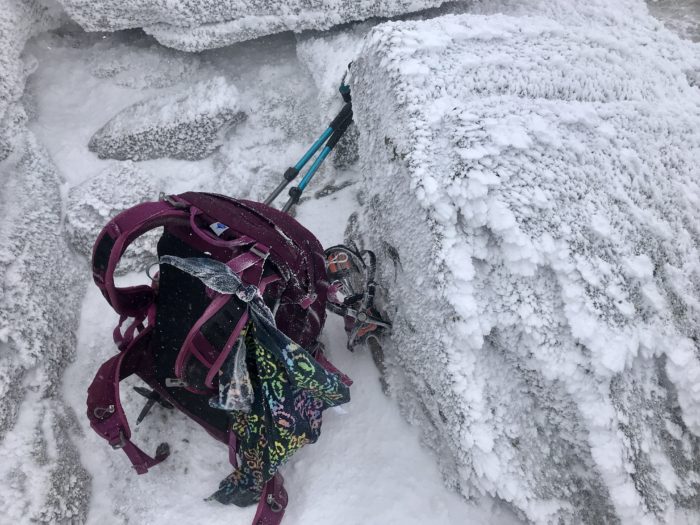 My pack on the summit covered in rime ice and frost

Being unsure with when I would actually reach the summit of Lafayette, and being completely socked in, I pressed forward along the ridge.  I didn’t stop to check my watch (which has a gps) or look at my map because I was just too anxious to get off the open ridgeline and out of the wind.  I knew I wasn’t in any immediate danger, the conditions weren’t that risky, but I didn’t want to be up there in the wind for any longer than I had to.

Eventually, I started climbing in earnest and I knew I was ascending my peak, my 48th summit.  As I neared the top, the two men were waiting and as I climbed over the final boulders to the summit, they congratulated me on my finish.

It was perfect.  I stood on top of that mountain in the intermittent winds, rime ice forming on my gear, and I smiled. 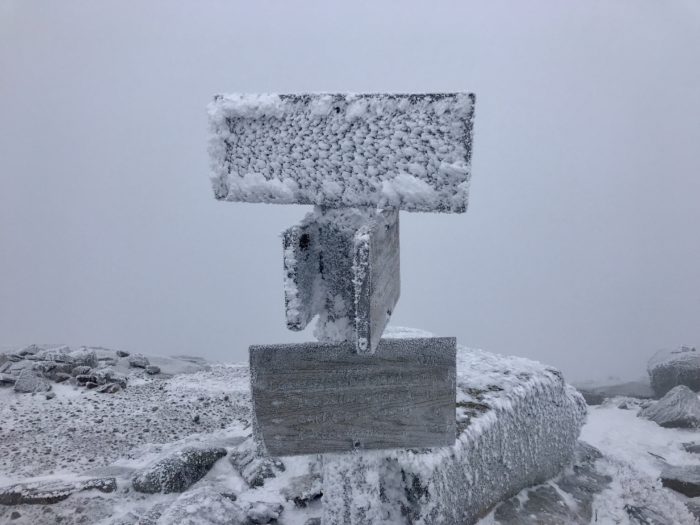 So what does it feel like to finish the 48?

Thousands of people are aspiring finishers of the list, looking up to us, the ones who have completed it, for inspiration and motivation; wanting to know what it feels like to be done.  I used to be one of those people.

Do I feel more confident in myself?  Can I finally feel proud of my body and content with what I look like now that I’ve completed the list?  Those were feelings I hoped to have when I set out in earnest to complete the list over a year ago.  Those are feelings I still don’t have, but I’m no longer focused on feeling content with how I look.  My journey shifted and I’m no longer focused on me, in fact, one of the things I like most about being in the woods is that I no longer matter one bit.

For me, finishing the 48 feels like a quick breath in before plunging back into the water.

It feels good to be able to say I finished, but it is by no means the end of my journey.  I’m proud of my accomplishment, but very few people in my everyday life even know what I did.  Sometimes you don’t want to share what something means because nobody could ever understand how important it was unless they were in your shoes.

I’ve pushed myself mentally as well as physically far beyond what I ever thought possible.  Every time I completed a hike, whether for the first time or for the fourth, it meant something more than words could say.  Finishing the 48 means I finished a list created by men trying to itemize the majesty of the wilderness.  The list isn’t what matters, the patch I have sewed to my pack marking me as a finisher, the prestige of being one of the elite, none of that is what matters anymore.

I’m over halfway done with round 2 of the 48 now and there are many more man-made lists that I am working on, but I’ve come to realize that finishing those lists won’t change who I am.  They won’t make me more amazing than someone else, they don’t make me stronger or faster than another hiker, nor do they mean I am not going to make a mistake while hiking and hurt myself.

I’ve cried on summits because of exhaustion, cried because of the beauty of clouds lifting over alpine gardens, I’ve cried because I miss my husband and want to go home.  I laughed because of my own stupidity, smiled remembering how I thought a particular hike was so hard a year ago, and because I’m so happy to just be out there in the woods with wet feet and sweat dripping down my back.  I’ve learned how to regulate my body temperature, how to navigate on poorly marked trails, and how to identify different types of animal tracks.  But most importantly, hiking has shown me who I am and what makes me happy. 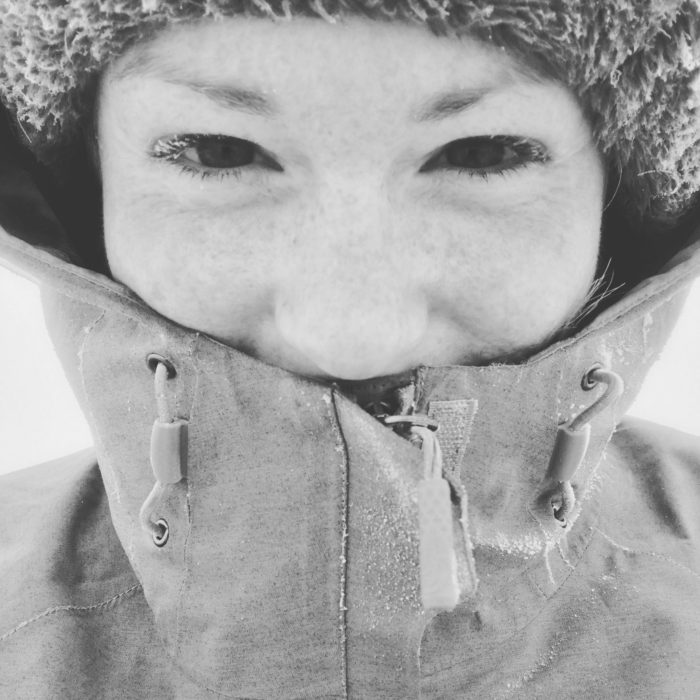