Finishing Washington Over the Knife’s Edge

Writing has been difficult these past few weeks. It feels as though I’ve only had negative things to say, with the plethora of people-related experiences we have had. I told myself I would write about both the negative and positive experiences, to keep them as real as possible. The problem is that I’m not really a negative person, which makes it hard to put time into reliving small things I did not particularly care to live through the first time around. It created a cycle of negativity that took some time for me to shake out of.

In the name of science, I did a little experiment today. I counted the number of hikers we passed without telling Brianna I was doing it. I wanted to find out how many people Brianna thought were passing us in a day as compared to how many we actually passed.

First question: How busy would you say the trail has been today?

Brianna’s answer: It seems like there are fewer people today.

Second question: How many people do you think we have passed today?

Brianna’s answer to the second question was not just wrong, she underguessed the true count by half. I counted 107 hikers and 1 dog in 11 hours, 104 NOBO / 3 SOBO. For those not doing the math at home:

If today felt like less people, how many did we pass on the days that felt super busy? I’m not sure I fully trust these numbers. Neither Brianna nor I remember seeing .7 or .6 of a person while we were out there.

Of the 107 people and 1 dog, we knew exactly 1 of the people and the 1 dog, Ian the man and Sandy the dog from Shelter Cove! The man and his dog appeared as dots on the horizon long before we could identify who they were. Two other hikers passed by us as we rounded a corner and warned, “that dog is not ours, we would have it on a leash.” Brianna and I scratched our heads at their odd remark before a twinkle of recognition moved from our eyes and into our brains, “Ian!” 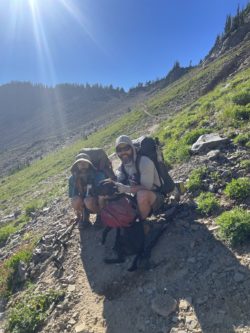 Brianna and Ian became fast friends back in Shelter Cove, talking for much of the afternoon we spent there. Ian was the beneficiary of many hiker meals we had shipped ourselves but did not need at that time. It’s not a surprise that he also remembered us from way back when. We had a good 10-minute catch-up chat on the side of the mountain before heading off in opposite directions for the last time.

Shortly after saying goodbye to Ian, we ran into Mandy, the woman who owns the Purple Rain Adventure Skirts company that makes Brianna’s hiking skirt. Brianna has a black skirt and was instantly jealous of Mandy’s purple skirt. The chance meeting was a total fan girl moment for Brianna, they talked about their skirts and what they love about them for a good long time. 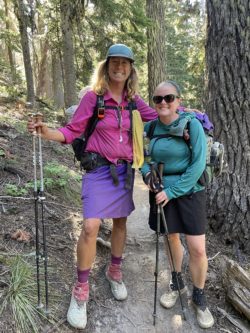 I’m not sure if today’s hiking day was the most challenging we have ever had, but it was very difficult. The trail was visible for miles and miles as we climbed up the knife’s edge toward Ol’Snowy. Sun beat down upon us all afternoon, but it did not bring our spirits down one iota. 360 views of the surrounding mountains lifted us up every incline, fueling our fire to make the top. This experience was majestically one of the coolest things I have experienced in my life. Last week was thru-hiking lows and today had more than enough highs to pay it back with interest. 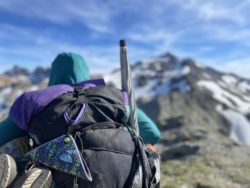 I’ve never been to China, but the jagged mountain rocks formed into walls at places, making me think of what the Great Wall might look like if it had been created almost entirely by Mother Nature. The last quarter mile up was a steep 1,200ft/mile hill over large rocky plates of scree that slid and clapped beneath my feet as I climbed. Reaching the top made me feel special and powerful, looking to the horizon was a reminder of how small and fragile we all are. 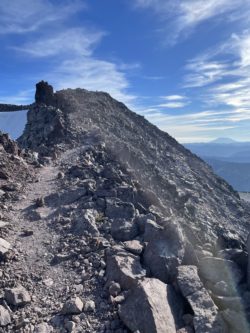 Camp for tonight is also pretty grand. We walked past the dozens of hikers that were camped at the base of the knife’s edge and found our own home nestled in a small alcove of trees. Tomorrow, we say goodbye to Washington and plot a course to the neutral zone (California). 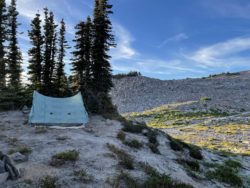