May 25.  A hiker friend and I got a ride up to Cumbres Pass from Chama this morning.  My friend was still waiting for her gear to arrive to the post office, but wanted to hike a few hours and check out the trail conditions.  I had all my gear, and was ready to start the next leg of the journey.

My friend set off ahead of me, with her light day pack.  I followed behind after fueling up on a Hot Pocket in the parking area.  The weather was clear and cool at 10000-12000 feet, great hiking weather.

The first miles were dry and snow free, winding higher and higher, gradually, over pretty open areas.  Yellow/brown grass, conifers, views of the valley below and even the town of Chama.  Calming cool breeze, nothing too chilly.  Pine scent.

I felt so relieved, thankful and joyful to be back on the trail again after several days away.  It felt like a gift, kind of like starting over again.  Maybe the unplanned break had a silver lining, a reminder not to take the trip for granted.  I knew that in the next few days, the competitive spirit would come back and I’d start having expectations for the mileage of my days, but on this day, I was just happy to be out again.  It was also hard to make goals because we just didn’t know how much snowy patches ahead would slow our progress.  Some said, expect to do 50% of your typical daily mileage, quite a reduction. 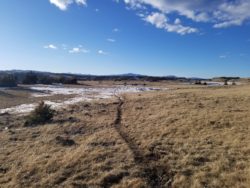 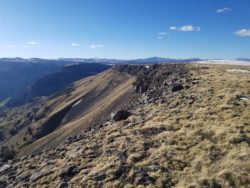 When I had signed a register at the start of the day’s hiking, I had seen that 25 hikers had signed within the same day, ahead of me.  I was relieved to know so many other hikers were up here.  I soon met a friendly hiking couple.  We stopped at a creek and remarked on how soothing it is to have running water all over the mountains, abundant.

In truth, this landscape changed so entirely upon approaching Colorado from New Mexico, it was as if we were hiking a different trail suddenly.  It was a nice change of pace, these mountains, wilderness.

One man walked towards me in the afternoon, complaining of altitude sickness.  Nausea, headache, short of breath.  He was descending to a lower route.  Thankfully I didn’t experience altitude sickness on this day, in spite of the elevation gains.  To see him was a good reminder that one can always backtrack, there are always options.

I approached my first steep snow patches in the afternoon.  I pulled on my microspikes and held the ice axe in hand, then inched across the snow.  These snow patches rested within groves of conifers, so the stakes weren’t so high- if I slipped, I’d be caught by a tree.

I was amazed by how much security the microspikes added.  I could sense the spikes digging into the snow with each step.  I practiced lodging the ice axe in the snow bank above me as I walked.  It was a day of crossing small snow patches, or studying a crossing and choosing to stick to dry land above or below the snow bank.  I thought it was pretty exciting, learning a new skill out here.  Thrilling to cross steep slopes, especially.  Good practice, I hoped, for what was to come.

It was a day of crossing small snow patches, or studying a crossing and choosing to stick to dry land above or below the snow bank.  I thought it was pretty exciting, learning a new skill out here.  Thrilling to cross steep slopes, especially.  Good practice, I hoped, for what was to come.

The trail ascended to heights above 12000 feet, with stunning views of surrounding valleys, meadows, mountains, each step of the way.  Surrounding and the far off mountains held significantly snowy caps.  A beautiful sight, though I wondered, would the trail eventually lead up into snowy peaks such as those?  What would that be like?

I hiked several miles, until evening, then camped by pretty lakes.  It was a chilly night, but on day one, I enjoyed the rugged landscape and living, the opportunity to hike and camp up in the heights by the snow, before it melted away. 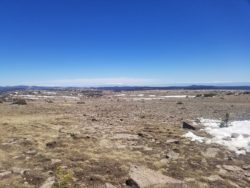 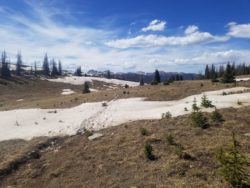 May 26.  I woke up around 2 am, chilly.  I kept feeling the bag of electronics inside my sleeping bag and my water bottles beside me.  Everything felt cold, even the things inside my bag with me.  It couldn’t have been much less than freezing, but I felt chilled for about an hour, especially.  I ate a snack and that seemed to help.  I drifted off to sleep, burrowed inside my bag, then didn’t wake til 0630 because it was so dark in there.

I was pleasantly surprised by how warm the morning was, with the sunrise.  I hiked in a coat, comfortably.

During one morning break, a line of 5 elk trotted by on a nearby path.  They never saw me.  A minute later, I accidentally startled another group.  They seem large to me, larger than the deer at home.  It made me feel I was out in the wilderness.

I met another hiker, carrying a lengthy tripod and camera to document the journey.  He asked if he could take a video of me walking by on a snowy hill, then told me he’s making a documentary about thru hiker hardships.  I laughed about that later.  Did I look like I was struggling, trudging through the snow patches?

The views continued to be incredible.  The Sangre de Cristo range to the east, so high, snowy and formidable.  I had wondered if we’d be traversing those peaks, before I got my bearings.  Probably a good thing we were not- looked like you’d need serious mountaineering skills on a range like that.

The CDT seemed gently routed thus far, mostly, across wide basins with gradual climbs up passes.  Snow patches mostly on gradual slopes so far, not anything steeply pitched.  Often if desired, I could find ways to skirt a snow patch instead of walking over it, if that felt too risky.

Frequent breaks.  I passed by two other hikers, getting to know them throughout the day.  One laughed at me taking a nap by the trail.  The snow is so bright sometimes (even with sunglasses), I had to rest my eyes. 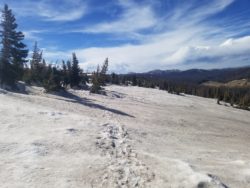 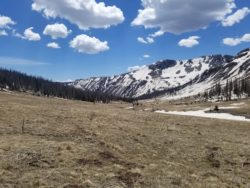 Walking over deeper snow patches later in the day, I started post-holing, footsteps giving way suddenly and sinking down into the snow with the weight of a step.  Post-holing startles, slows progress, and quickly tires a person out.  Other friends had told me about post-holing in the Sierra on the PCT, but this was my first significant experience with it.  I understood now, with a greater conviction, why hikers try to cross snowy passes in the morning, when the snow is yet hardened from a cold night.

I camped by a lake again, where other hikers had also stopped.  It was nice to eat a quick dinner with others, then we all crawled in our tents by 7pm, too cold to socialize long in the evening.

Incredible views, snow hiking, walking by elk in their range.  Sometimes I can’t believe I’m out here at all, that a few years ago, a desire to hike the AT was met with enough family/friend support to start me on the path that led here, to this.

I laugh a little, to read over this now.  I’ll always be glad that I’ve been able to go on this hike, but the days ahead would bring challenges and an array of new feelings about it all.