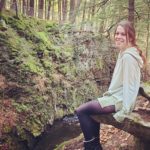 I Thought We Were In A Drought 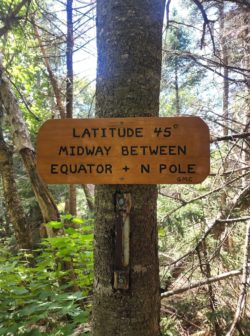 Day one on the trail went pretty well. The northern terminus is one of the Canadian boarder markers, which was pretty cool to see. I did wonder how far into Canada I could get without anyone knowing or caring. Another notable sign was the one marking halfway between the north pole and the equator. It was cool to be made aware of my specific latitude for probably the first time ever. The road crossings and trail intersections were also all labeled well. A friend thought it might be near impossible to follow this trail. Thinking back on day one, it seemed like an overall good day.

My notes suggested that a group of ten people making barely enough noise to be bothersome was where I drew the line, and I didn’t want to stay next to shelters anymore. However we learned most water sources are at shelters as well as bathrooms made for humans and not cats, so that rule was tossed out. 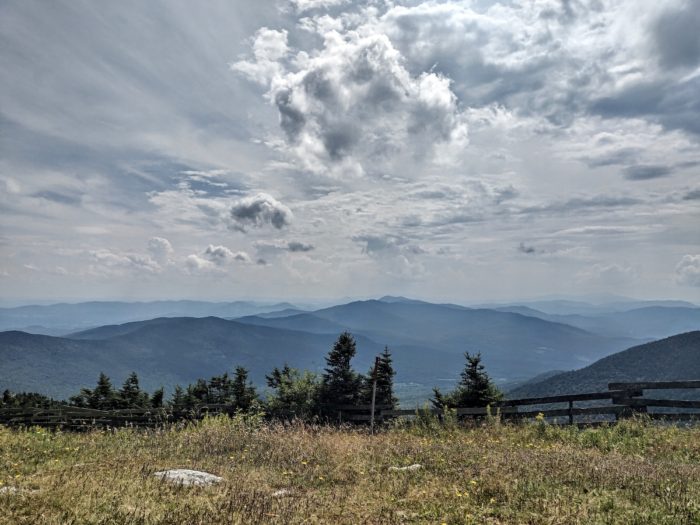 We made it up Jay Peak the second day. My pack I bought before this trip fits much better, but it doesn’t change how uncomfortable carrying over thirty pounds is. We carry a weeks worth of food at a time, it’s a lot. I went from feeling like an overworked sow to a spring chicken the second I took that pack off at the summit. Jay Peak had 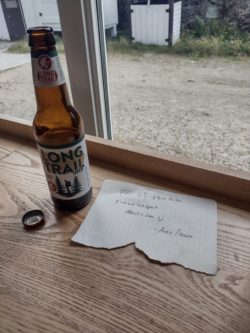 great views and made the struggle worth it though. Plus we found a stray beer at the top left for the next thru hiker to pass through, even warm it tasted great.

We didn’t make it to our goal shelter due to a storm rolling in so we camped in a stealth spot on Domeys Dome. Who named that mountain? Was it Domey? The ambiance for night two, alone at a stealth spot, was drastically different from night one. Maybe being near a shelter won’t be so bad.

The third day made us question our ability to walk in a timely fashion. What took us half a day in a notably difficult range in NH took us all day out here. We’re beginning to think they measure miles differently. Turns out we just hadn’t eaten enough of our supply to bring our pack weight down. No problem, I’ll eat the oatmeal cream pies stat. We went up a few small mountains and nothing had a view. The trail was either rock scrambles or mud pits and came without a reward. We didn’t know it yet, but this would become the norm in Vermont. Why is there so much mud though? It hasn’t rained in days.

First night staying inside a shelter and boy would a sleeping pad make a difference. As hammock campers we didn’t have them and sleeping on plywood isn’t it. We met one other hiker going south at the shelter, almost done with his section hike. Despite the wood bunks, it was a nicer shelter experience than the first night. The hiker we were staying with had been there the first night as well, it turned out. 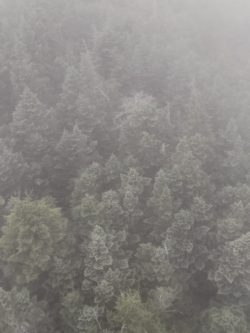 Our first day of rain on trail was also the first day we were starting to feel a rhythm. We summited a mountain with a lookout tower, but it was completely fogged in, of course. The trail leveled out after this for a few miles for the first time so far, but it was pouring. The trail was a stream. Isn’t the entire world supposed to be in a drought? It’s been incredibly wet out here. Vermont doesn’t follow the trends.

We were actually looking forward to a shelter but a herd of college kids had taken it over and we had to stealth camp up on a ridge in the rain. It was the first and only event so far that really turned a day bad. The hiker from the previous night had gotten there in time to find a spot and suggested if his tent wasn’t already up he would leave too. After the rain, everything we had was wet. Like everything, even my pillow. 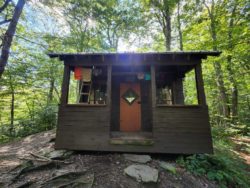 We planned a short day, hiked six miles to a shelter and got there by noon. It was warm and sunny and a guy named Crazy insisted on building us a fire before he left for the day around 1pm. We got everything dried out and met a lot of different people while spending a day staying at the shelter. The shelter had a porch, a latching door, and a loft. I wanted to live there.

The hiker we had met the previous couple nights stayed there too. It was the last day of his last portion of his section hike, he was done with he trail. A couple of his friends who we had seen on Jay Peak walked a side access trail in. They brought beer that their friend John shared with everyone at the shelter. There were a few other hikers there who’s names I don’t remember, but they all gave us great suggestions for when we got to town the next day. A lot of them were going north so it was nice to know what we were heading towards. Hanging out with other thru hikers was a great experience and it was a much nicer day than the previous one in the rain.

Over all, our first handful of days went well. We experienced a bit of everything and are looking forward to the rest of our hike!