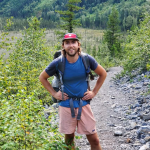 Section A is in the bag! 160km (100 miles) and 7000m (23000 ft) of elevation gain combined with a massive heatwave left us sunburnt, sleep-deprived, and incredibly sore. The GDT starts with a bang with some of the hardest sections right off the bat. Fortunately, I was fueled by energy and excitement which helped me push through the very long and quite strenuous days.  This first stretch was my longest backpacking trip to date so the pack was loaded up with 6 days of food which I was eager to eat away.  However, with the weather consistently hitting the mid-30s (mid 90sF) hunger never really set in.

After our first quick little trip down to the border and southern terminus it still felt like we needed to start the trail.  Our first day, which was technically our second, was up and over Carthew Pass and down to the spectacular Cameron Lake.  It was a very hot day and we got an early start around 530am.  Just a few hours in and we immediately knew today was going to involve a lot of swimming. Waterton Lakes National Park lives up to its name.  There are amazing lakes all over the place. Upon heading up the pass we were hit with the morning sun fairly quickly as we ascended to the alpine in a couple of hours. We hit Carthew Lake, an alpine lake that was crystal blue and knew we needed to get in. Since we left so early in the morning we could take our time and enjoy the hike rather than our typical weekend trips trying to pack in as much distance as possible. Shortly thereafter, we spotted a critter in the distance on the other side of the lake.  We cautiously rounded the lake and saw our first grizzly!  Not even 1 day in and we already spotted what looked like a teenage grizzly bear. We let him do his thing and announced our presence.  We continued to climb.

Upon hitting the pass we finally reached the burn.  In 2017 a massive portion of Waterton burned, taking several structures with it.  2021 marks the first year in 3 years that much of the park has been open.  We didn’t really put a lot of thought into this but it would come to haunt us in the future. Walking through the burn is challenging. It is HOT. Even without a heatwave, walking on black ground, surrounded by black dead trees and bone dry air is stifling. It also made for a bit of difficulty finding the trail.  Coming over the pass we lost the trail and had to turn on adventure mode.  Eventually finding our way back after side-hilling through ash and burnt ground. Coming down the other side we were met with several day hikers going to the pass to take in the striking views of Cameron Lake.

We stopped at another lake and jumped in to cool down before taking the overly long switchbacks all the way down to Cameron Lake.  You can drive to the lake so it was quite busy with people day tripping. We ran into 3 other GDT hikers Sarah, Heather and Stefan and asked if we could hang out and lay in the shade next to them. We all lounged and waited for the heat of the day to pass. We all were going about 5km further to Akamina Kishenina campground that night. They left mid-afternoon while Tanya and I left around 5 pm.  The next hour was the hottest stretch of the day, a couple of KM on the road followed by a small hill through the burn.  Upon reaching the campground we realized we should have savoured the views and nice breeze of Cameron Lake.  We walked into a forest graveyard.  The campground had been clearcut to avoid deadfall so we were in a sweltering post-apocalyptic firepit bowl with no shade or anywhere to hide.

There was a small creek running about 100m away and a walking bridge over it, Stefan was also using a tarp set up for his shelter so we were insensitive and used his tarp to make a shade shelter under the bridge.  We proceeded to bring out our inner troll and huddle in the small amount of shade in the small ice-cold creek.

It was amazing and everything I had hoped for.

Communal suffering has a way of bringing people together. Today marked the beginning of our trail family. 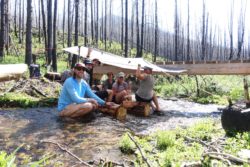 Other day hikers walked by and gave us some weird looks but to us, it was a little sanctuary.  Once the sun finally settled down around 8 pm we set up our tents. Still far too hot to climb in we were counting down the minutes when we could sleep. Being not even a week after solstice, sunset was just a few minutes before 10 pm which made for extremely long days.

Around 930 or 10 someone mentioned they saw a bear near the bear lockers. We got up and took a peak. Sure enough we saw a brown bear inspecting the food lockers. We watched as he fumbled around and tried to find a way in. About a minute later though the door swung open and we were all shocked. Our reaction time was delayed, he managed to open the bear proof locker and went straight for a bag of Fritos.  A few seconds later we all ran down, throwing rocks and yelling. Only wearing boxers I was joined by the others in trying to scare off the bear.  This wasn’t his first rodeo and he wasn’t really phased by us screaming at him.

Eventually he moved about 100m away and then went about his normal bear activities of wandering around, he circled camp and all of us were a bit on edge.  We were all thankful there were 7 of us camped together. This rumour of the bear encounter spread through the trail like wildfire and would eventually circle back to us, people asking if we had heard the story. Day 2 and it already felt like I was part of something bigger, a whole community of people living an experience and taking on a massive challenge. It felt remarkable and was something I have been wanting for years.

We were all heading to the same campground the next day so decided to wake up and hike together the next day. The week was getting gradually hotter so tomorrow we wanted to be up early.  Really early.. 3:15 wake-up call for a 4:10 departure.

These early mornings would soon establish our trail family title of The Nocturnal Family.