Flirting with an FKT Attempt

So… long story short. I decided to hike 75 miles in two days because my dog doesn’t know how to fetch. Legs was one day away from beginning his thru-hike on the Colorado Trail and we were boondocking in the BLM lands near Silverton, Colorado. 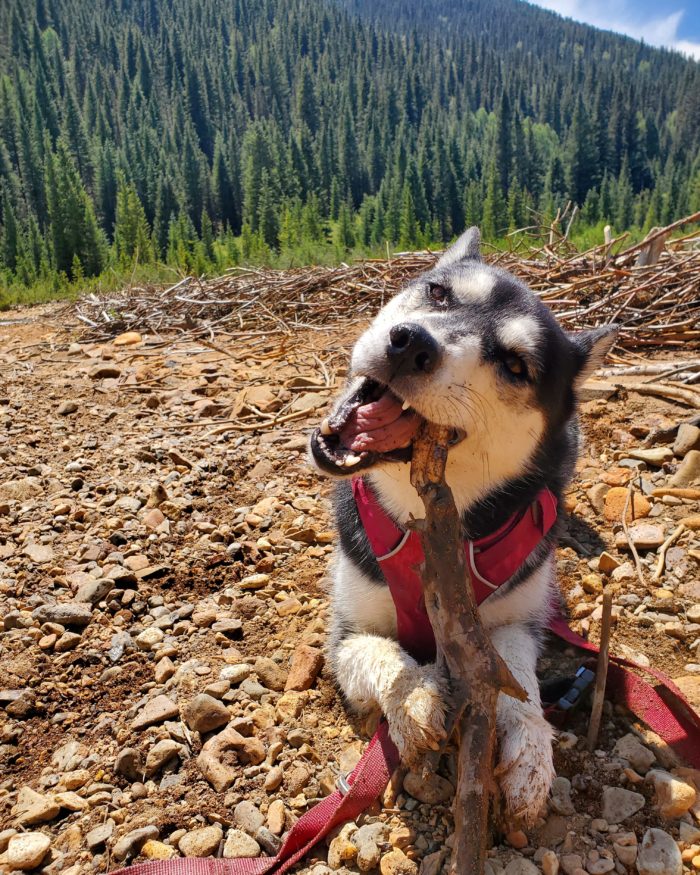 We had taken the dogs on a walk near a river and Legs was playing chase with Thru. When she gets excited she does a husky “scream” and runs back and forth between us, zooming in circles as Flynn chases her. She had recently shown passing interest in playing with sticks and Legs wanted to encourage it by playing fetch with her and tossed a stick enthusiastically across the water. She was not impressed. As she sniffed away in the opposite direction, Legs leaped across the creek to retrieve the ignored stick: and landed with a pop right on his ankle. He has a history of injuring this ankle in particular and the urgent care in Durango agreed a thru-hike was not in his immediate future. Despite jests about bringing his new boot on trail with him and blaming Thru’s total laziness for his injury, he knew he would need a good long break before trying to hike.

I ended up finishing the trail in 3 1/2 weeks; most people do it in 4-6 weeks and the overall FKT (fastest known time record) for the trail is just over eight days. The women’s record, as of a month ago at least, averaged out to just over 35 miles a day. I figured if I could prove to myself that I can hike those miles I would try for the FKT. It was actually Legs’ idea and he was excited to support me again. It turns out two incredible hikers have broken the original record since then and now it stands at 10 1/2 days… averaging out to around 45 miles a day. With how badly these two days kicked my butt, I don’t see myself attempting this year. But it sure makes me excited to think towards the future.

Like every other night before I leave for a trip by myself, I barely slept the night before. It wasn’t nerves necessarily; worst case scenario this experience is just going on a walk in the woods at a pace I know I can keep. It was more excitement and eagerness to begin that was keeping my heart racing so when 4:30 a.m. finally rolled around I quickly assembled my things and sat ready like a kid on the first day of school as Legs drove the camper up to Molas Pass.

On trail my diet usually consists of skipping breakfast, two or three snacks during the day, and 4-5 peanut butter tortillas for dinner. This trip I packed enough for four snacks during the day and enough peanut butter tortillas to last me at least double what it would need to. I slammed my first package of Pop-Tarts around 10 a.m. with about 14 miles under my belt. I struggled to take meaningful bites between labored breaths and quickly decided to at least allow myself a seated break when eating. I was feeling really good about my pace and my body hardly hurt at all. I even had the biggest climb of the day behind me already, which was a huge morale boost. I did start to worry when I noticed about half of the water sources I had available to me a few weeks prior were mostly or completely dry. I started thinking ahead to definite water sources such as rivers that I could rely on for the next 60 miles.

About midday I approached Celebration Lake with 21 miles behind me. I saw a group of hikers with large backpacks and bikers standing near their car. As I came closer the hikers turned around and I recognized them as a man about my age and his father whom I had met my first day on trail. The son recognized me immediately. “Oh my gosh, Oats! I never thought we’d see you again.” His father turned to me and gave me a smile. “We’ve taken our time in towns and on trail. It has been a good experience but I’ve definitely been struggling these past few days. But only a few more to Duragno,” he said. I explained I had finished a few weeks prior in the monsoons and was looking forward to actually seeing the views this time through. The bikers offered to fill me up on water, saving me the painstaking five-minute filtering process. “It’s so lucky to run into you guys but I’ll have to see you in Durango, I’m in a bit of a hurry today,” I told them. They smiled and the son wished me well with a resounding “Happy trails!”

I finally realized how much I had exceeded my expectations for the day at about 6 p.m. when my feet still felt functional and the only real complaint my body had was my IT band on my left leg. Otherwise, I was still trucking along with only 5 miles left to make it an even 40. The best part? It wouldn’t involve any night hiking, I would make it to my campsite by 8 p.m.! That would definitely be one of my main issues with attempting an FKT… night hiking scares the beejeebus out of me. That made the feeling of settling into my sleeping bag before nightfall, my nearly empty pack crumpled up under my knees, that much sweeter.

I woke up the next morning while it was still dark. I glanced at my watch: 4:30. Wouldn’t be the earliest I had ever been on trail. I quickly packed up and was on trail by 5 a.m. It was dark but I could barely see between the moonlight and the beginnings of a sunrise over the mountains.

I remembered hiking through this section of woods a few weeks earlier, tears streaming down my face because of the bitter, cold, incessant rain and the fog that seemed unbreakable. Now it was just… quiet. Not necessarily eerily quiet but certainly the most quiet I had seen it get on trail. I remembered my second night when a flock of ravens kept me up for two hours past dark, screaming at nothing. Now there wasn’t the squeaks of the pika and marmot, the chattering of the crickets, or even the songbirds singing at the morning. It was just quiet. And it was nice.

It felt like I was stuck all morning; like my legs wouldn’t work with the speed and ease they had the day before. After 9 a.m., though, I finally found my stride and booked it up the remaining climbs between me and the descent into Durango. Part of the reason I wanted to do this segment going south is because there is a long descent into Durango and that climb can be an intense beginning to any hike. Around 11 a.m. I found myself trudging past Kennebec Trailhead with only 21 miles left in the day.

The descent was bearable until the last 10 miles. Though the trail is all downhill from here (literally) the miles had taken their toll and I was running on reserves. I was pretty dehydrated from a 23-mile water carry earlier in the hike and had just summited a small peak. This usually wouldn’t be a problem except it was pretty hot and my feet started to sweat during the four-mile ascent. They began to itch uncontrollably in my socks and when I took off my shoes found my feet were literally disintegrating. I had multiple blisters on each toe and had long cuts in between my pinky toes. But I still had eight miles.

With about three miles left, I ran into Legs hiking up trail toward me. He gave me Gatorade and kept me moving forward, knowing that if I lost momentum this could be a long three miles. I was practically falling onto my hiking poles and couldn’t believe I had felt so strong just a few hours earlier. I’m grateful I pushed my own limits and flirted with the idea of an FKT, but I know this in no way really prepares me for a real attempt on any major trail. That would take months of prep and much better nutrition. But I am so glad I went back to see those views and had a blast pushing my limits.