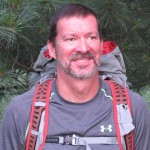 The Foothills Trail: 77 Miles Through South and North Carolina

The Foothills Trail runs from Oconee State Park to Table Rock State Park, both in South Carolina. In between, the path meanders through Sumter National Forest, Nantahala National Forest, land protected by Duke Energy Corporation, and Gorges State Park in North Carolina. While the “hills” aren’t as high as some of the Appalachian Mountains, they are often just as steep. The elevations encountered run from just over 1,000 feet to the highest point in South Carolina, the peak of Mount Sassafras at 3,554 feet. 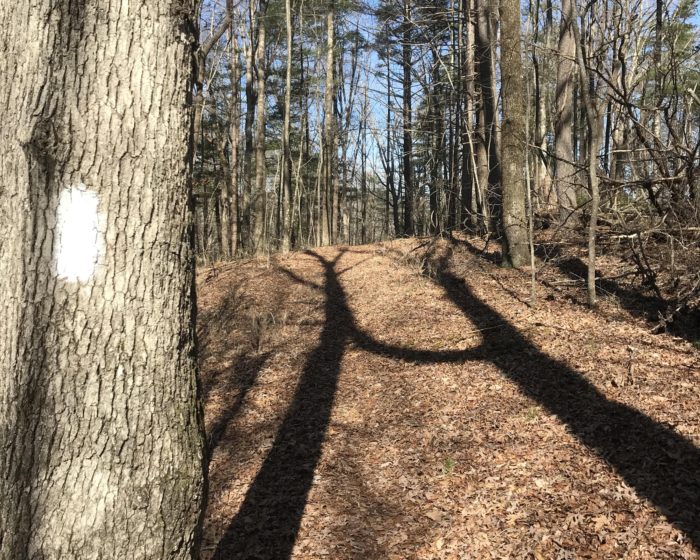 Every year thousands of people start hiking north from Springer Mountain with every intention of walking to Maine. Sadly, most do not make it. Amazingly, a significant portion quit the trail in the first 100 miles. Some were woefully unprepared and some didn’t realize that thru-hiker life just wasn’t for them. For these folks, a solid “shakedown” hike may have saved their AT attempt or, at least given them the knowledge to not disrupt their life for a walk in the woods that only lasted a week or so.

Part of my background involves being certified as both a personal trainer and a running coach. One of the more useful concepts I took away from that education was the Specificity Principle. Basically, the concept is that the most useful training is directly tied to your goals. Do you want to be a marathon runner? Your base training should be mostly running long. Want to be a better hitter in baseball? Worry less about lifting weights and spend more time in the batting cage. It’s a pretty simple concept but one that best prepares both your body and mind for your goal task.

With COVID-19 issue making an AT thru-hike impossible for most in 2020, the Foothills Trail can be considered for a back-up hike once restrictions are lifted. The scenery is reminiscent of the southern AT, but with the lower elevations, the hike is possible at any time of the year. Between the climate, a distance that doesn’t require a resupply and no shelters to congregate in, this trail would be a good, possibly “safer” choice, no matter when life starts getting back to normal.

Why Hike the Foothills Trail? 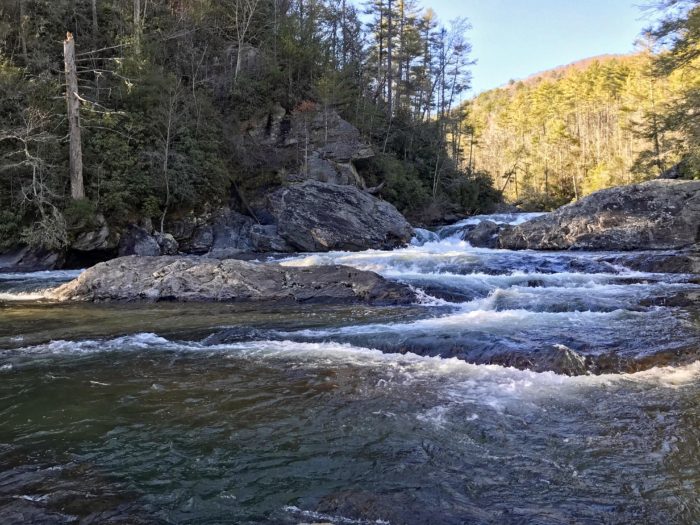 The Foothills Trail is a great hike for a number of reasons. The southern Appalachians are scenic, with plenty of rivers, waterfalls, and some great views. In many regards, much of the hiking is indeed reminiscent of the southern AT. This shorter hike can very much help prepare you for the conditions to come on the AT and let you see what the challenges are, before making that life changing commitment to thru-hike. The 77-mile length is a great test that took me five days to complete, hiking in late February/early March. 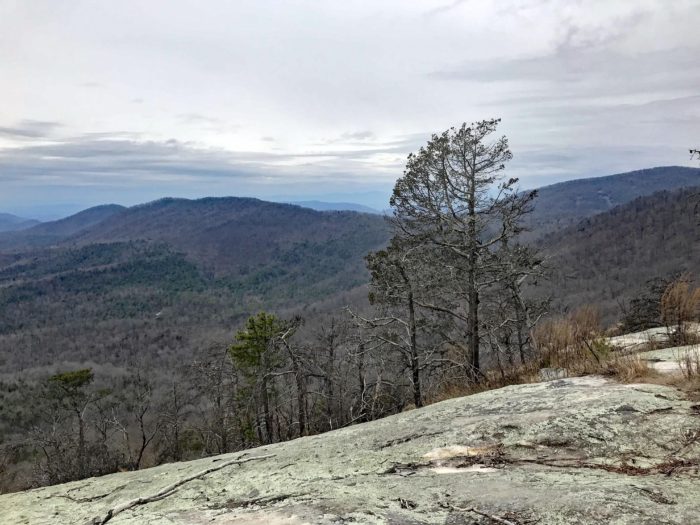 Do not let the lower elevations fool you; this trail is not easy. Per my GPS watch, I covered a total of 78.8 miles between the trail, a short detour, and wandering around campsites. Walking from Oconee to Table Rock State Parks, elevation gain was 15,433 feet and loss was 14,913. This worked out to an average change in elevation of 385 feet/mile. The AT, as a whole, averages a change of 237 feet/mile. At one point “Heartbreak Hill” climbed at a rate of 1,600 feet/mile. For me, the real heartbreak was giving all that climb back over the next half mile, then doing it all again. That is some great training for the PUDS (pointless up and downs) on the AT.

The footpath itself is well constructed and well maintained. The occasional flattish stretches are a joy to walk, but there is no getting around the power of gravity on the hills.

Even in the damp spring, I was able to rock hop any creek that wasn’t already bridged.

The trail can be hiked in either direction, though starting at Oconee State Park puts off the biggest and steepest hills until the food bag has lost much of its weight.

Table Rock State Park from Ashville: take I-26S to US 25S to SC-11S to park entrance.

Shuttles can be arranged through both local outfitters and a list of volunteer drivers. Both can be found at the Foothills Trail website. Overnight parking is available at either end by paying a $5/night parking fee. 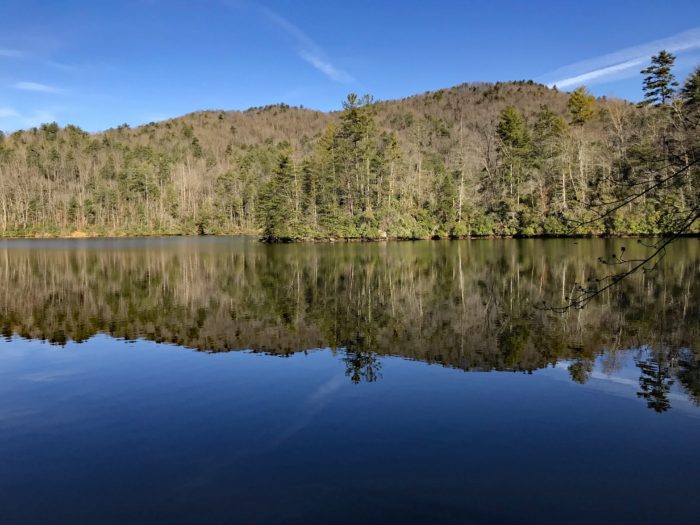 Like much of the southern AT, water is plentiful. There are numerous streams, impressive waterfalls and a large lake along the route. The Foothills Trail Guidebook points out all water options and I rarely carried more than a liter at a time. As always, filter any water before drinking it. 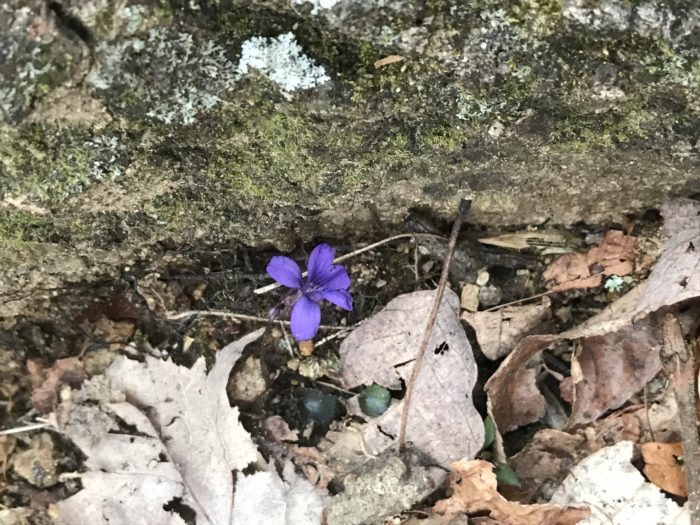 First wildflower of the season – March 2.

The Foothills Trail is not significantly farther north and generally stays 1,000 feet or more lower than the AT does through Georgia. Nearby Pickens, South Carolina, averages a low of 30 and high of 52 in January. By watching the weather, the trail can be hiked in late fall, early spring and even through the winter; perfect for that decision-making tune-up hike. Rainfall totals 53 inches annually and is spread evenly through the year. Snow is rare and typically doesn’t last. Even on Mount Sassafras, less than 9 inches of snow falls in a typical winter.

During my hike, there was a cold snap that brought nighttime temperatures down near 20. Even with that, the days were pleasant.

On the other hand, summer hiking can be hot, humid, and buggy. 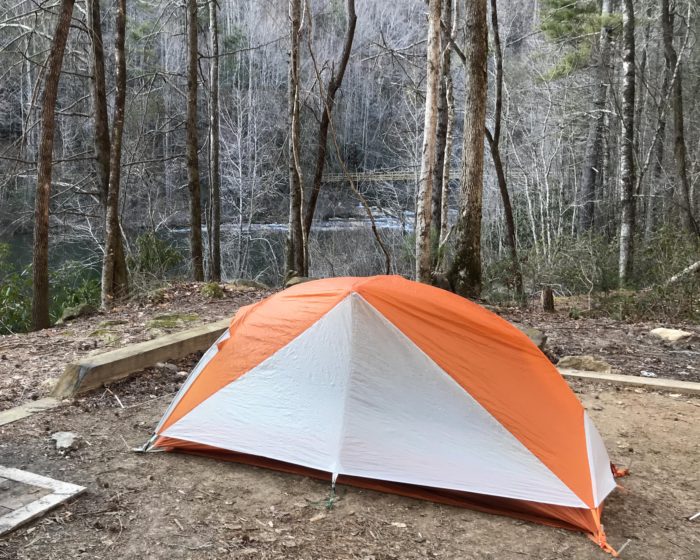 This is one area where the Foothills Trail and the AT differ significantly. There are 262 shelters on the AT. Other than one small “emergency” cave, there are none on the Foothills Trail. Bring the tent or hammock. There are a number of great spots to camp, though, many designed and built as Eagle Scout projects. Nearly all have flat spots for tents, a fire ring, and a nearby water source. Quite a few have benches and provisions to bear bag your food. I hit the jackpot camping along Lake Jocassee. Gorges State Park maintains campsites with sand tent pads, grills, and picnic tables. Within the national forests, camping is permitted throughout and there were no fees at any of the locations I camped.

The other main difference is that in early spring the Foothills Trail is not crowded with campers. I camped alone at 3 of 4 locations and actually went two full days without seeing another person.

As a training hike, be prepared to carry all the food needed for the trip. It is possible to cache supplies near a road crossing, but it complicates logistics significantly. Think of the trail as a “short” 100-Mile Wilderness. 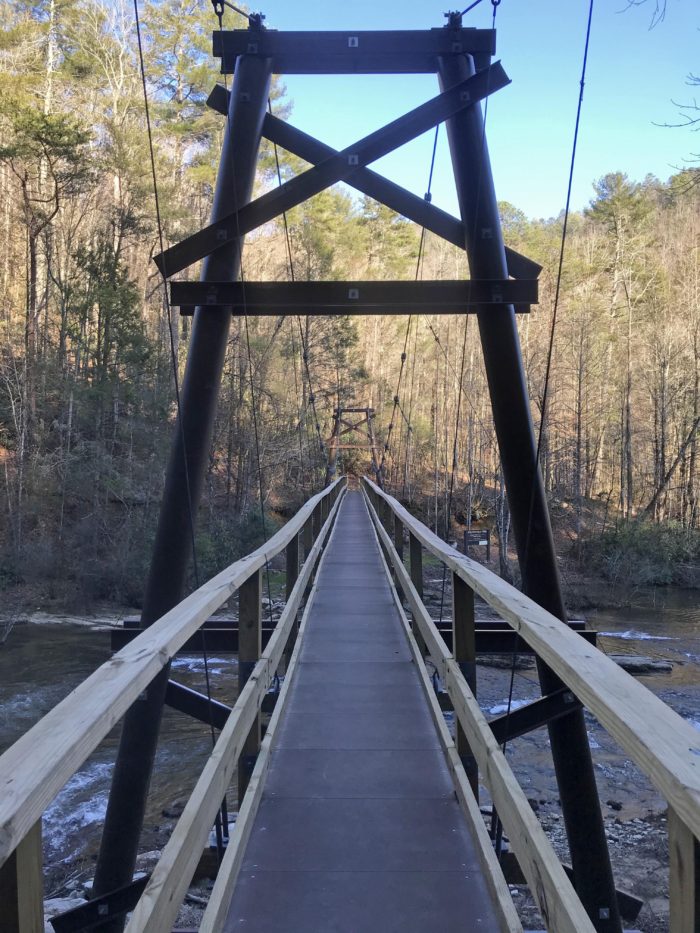 If you’re not sure if you really want to hike the AT, consider the Foothills Trail as a test. If you want to train for an upcoming AT attempt, keep the principle of specificity in mind and try a training hike on the Foothills Trail. Or, if you just want to get out in a beautiful natural area for an early or late season hike you can complete in a week, try the Foothills Trail.

Plan on spending 4-7 days on a well-designed, well-maintained, well-marked trail through some gorgeous, yet challenging terrain. The hike is not unlike the southern AT. The difficulty is similar. The surrounding forests and streams will seem familiar. The white blazes are typically easy to follow. The main difference I found was the lack of other hikers. If you finish this trail wanting more, there’s a good chance a successful AT thru-hike could be in your future.

Of course, for me, the best part of the trail was the seclusion and lack of shelters, so I’ll continue to hold off on the AT for now.