By the Numbers: What Footwear 2015 Thru-Hikers Wore on the Appalachian Trail

“You just get good at hiking, after so many miles. You become the toughness factor the boot had.”

– An eloquent and badass 2015 AT thru-hiker, on switching from sturdy boots to trail runners

– A slightly-less-eloquent, yet equally badass, 2015 AT thru-hiker, on how trail runners apparently suck

For a more balanced and detailed explanation of what footwear long-distance hikers wore on the AT this year and why, keep reading.

If you don’t actually like nerdy pie charts, but you still want footwear advice, skip to the TL;DR at the bottom.

The long-distance hikers of 2015

We surveyed 152 hikers who had walked the AT this year: 57 section hikers and 95 thru-hikers. The age and gender of hikers in the sample were roughly representative of ATC’s thru-hiker data. Women were slightly over-represented (36.2%) compared to the ATC’s reports of approximately 25%. The majority of hikers were young adults or in their fifties. Although section and thru-hikers both spanned a wide age range, thru-hikers were, on average, significantly younger.1 We asked them about the shoes they wore, and here’s what we found.

Most hikers will wear more than one pair of shoes during a long-distance hike.

Unlike backpacks, which most 2015 hikers kept for the duration of their hikes, the majority of hikers in our survey switched their shoes out at some point. 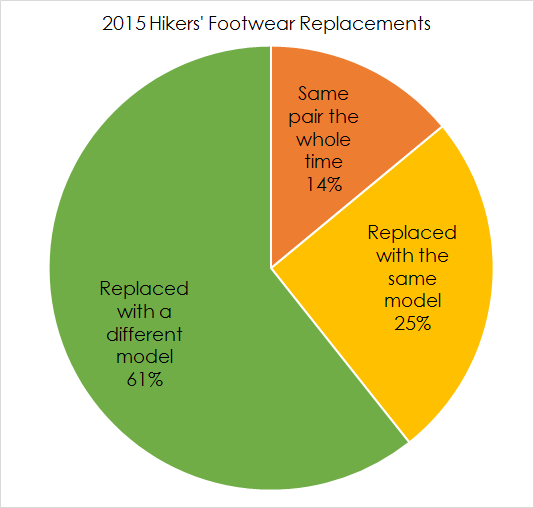 Most commonly, hikers switched to a different model of footwear.  A quarter replaced their shoes at some point, but with the same model they started with. Only 1 in 10 hikers kept the same shoes the whole time.

Which hikers are more likely to need replacements?

Age, gender, and footwear support level (i.e. heaviness/sturdiness of shoe type) have no bearing on how many replacements long distance hikers go through (including replacements with the same model). The only factors we measured that predicted more replacements were what you would expect: hiking a longer distance and dissatisfaction with the first pair (for reasons other than distance hiked, initial support level, age, or gender).2

Although this may seem obvious, I find it worth noting because trail runners and more minimalist shoes sometimes get a bad rap for being less durable than boots. Some hikers in our survey remarked that they personally thought trail runners need to be replaced more than hiking boots. However, we found this was not the case.

Why did people switch types?

Likewise, hikers who started with more supportive footwear were more likely to switch types during their trek.3  This suggests that it may not be how far people hike that contributes to changing, but that many hikers do not find hiking boots as optimal for the AT as they expected them to be. 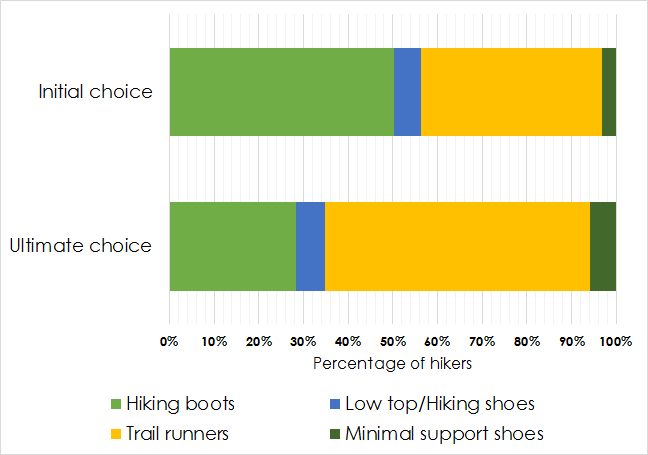 However, 59% of hikers ultimately ended up wearing trail runners, while only 28% ended up in hiking boots, 7% in low top boots/hiking shoes, and 6% in minimal support shoes (e.g., track running shoes, Chacos, Converse, Crocs).

Based on my own experience, observations during my 2014 thru-hike, and comments from some hikers in this survey, I suspect this is because many of the problems with thick-soled, high-top, Goretex boots arise when they get wet. Especially when they get holes and THEN they get wet, such that the Goretex holds all the water in, rather than keeping it out. I am probably not the only one who avoids hiking during heavy rainfall when I’m just doing day hikes or short backpacking trips. Furthermore, I hadn’t worn gaping holes into my shoes until I walked a few hundred miles. For this reason, I hadn’t experienced the misery of waterlogged Goretex boots until my thru-hike, and simply didn’t expect hiking boots to be as bad of an option as they turned out to be for me.

Beyond type of footwear, we asked hikers what brand and model they wore, and if they wore more than one, what their favorite was. 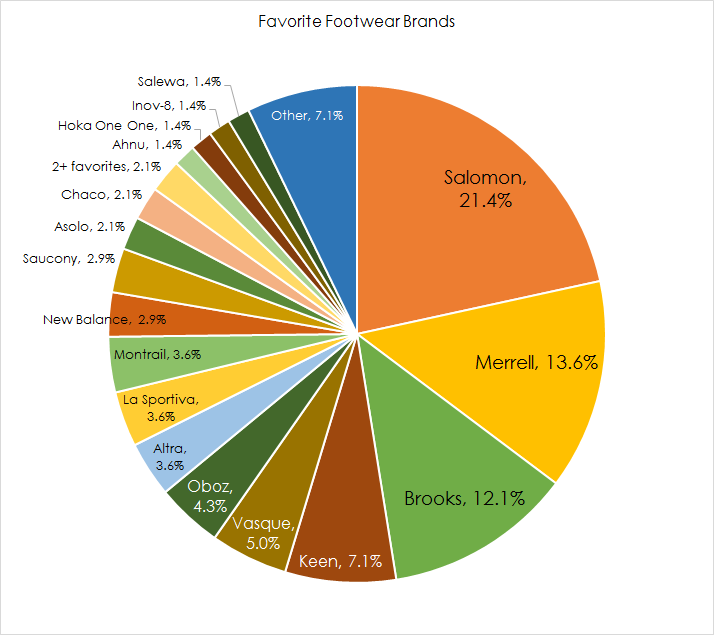 The most popular footwear brand was Salomon, worn by 1 in 5 hikers. Merrell and Brooks were the next most popular, followed by Keen, Vasque, and Oboz. 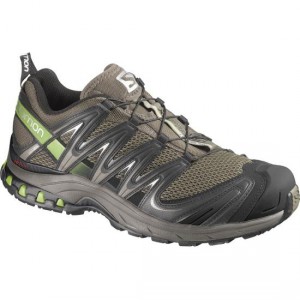 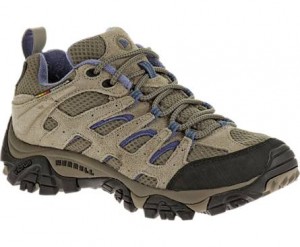 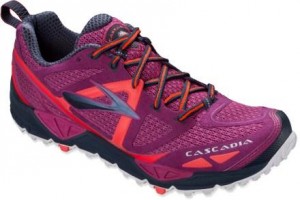 This appears to be due to continued popularity of the Cascadia 8’s and 9’s, but dissatisfaction with the newest model, Cascadia 10. In fact, ALL five hikers in our sample who specified that they wore Cascadia 10’s (rather than 8’s or 9’s) said they were not as durable as the hikers expected them to be. Some words they used to describe them included “HORRIBLE,” “TERRIBLE,” and “DO NOT GET THE 10S.” Yes, all of them said those words in all caps. Four of these five hikers switched to Cascadia 9’s and found them satisfactory, so this issue appears specific to the 10’s.4   (I have no personal issue with Brooks and have never worn the 10’s; I invite readers who had a similar or different experience to comment below).

We did not ask any questions about the use of additional insole inserts, but six hikers recommended these (I would personally recommend them as well). Three of these six specifically used Superfeet, and one mentioned that “Rob” at Outdoor ’76 in Franklin, NC will make custom insoles for hikers who stop at the store (I should probably disclaim my own loyalty to Outdoor ’76 because one of their employees gave me a ride from the trailhead, even when I flat-out told him I wasn’t planning to purchase any gear there).

In 2015, we found that thru-hikers simply need to replace their shoes more times than hikers who don’t walk as far (which is sort of obvious), and while they’re replacing their shoes anyway, they may be switching types.

Another notable difference was the unpopularity of Brooks Cascadia 10’s. While the Cascadia series (7-9) were by far the most popular model worn by AT long-distance hikers in 2014, and although the earlier models continued to be popular this year, the newest 10 model was the subject of poor reviews by long-distance hikers.

And implications for future long-distance hikers on the AT

Limitations of the survey

CONGRATULATIONS to all hikers in our survey for their incredible achievements! Thank you so much for taking the time to help future hikers with their gear choices.

Again, thank you to Zach Davis for his input on the survey content, for recruiting people to take it, and for his attempts to convince me that being a nerd is cool.

So far this year, I have written about hikers’ backpack choices. In the next few weeks, I will also be writing about sleeping bags, pads, and shelter systems on the AT.