Today started by heading straight up to White Pass. I followed the Cartridge South Fork that I camped next to last night. This start was another case of everything looking very close on a map, but still taking hours to get there. I was about 1.5 miles by crow to the top of White Pass from where I camped last night, but it still took an hour an a half to get to the top. 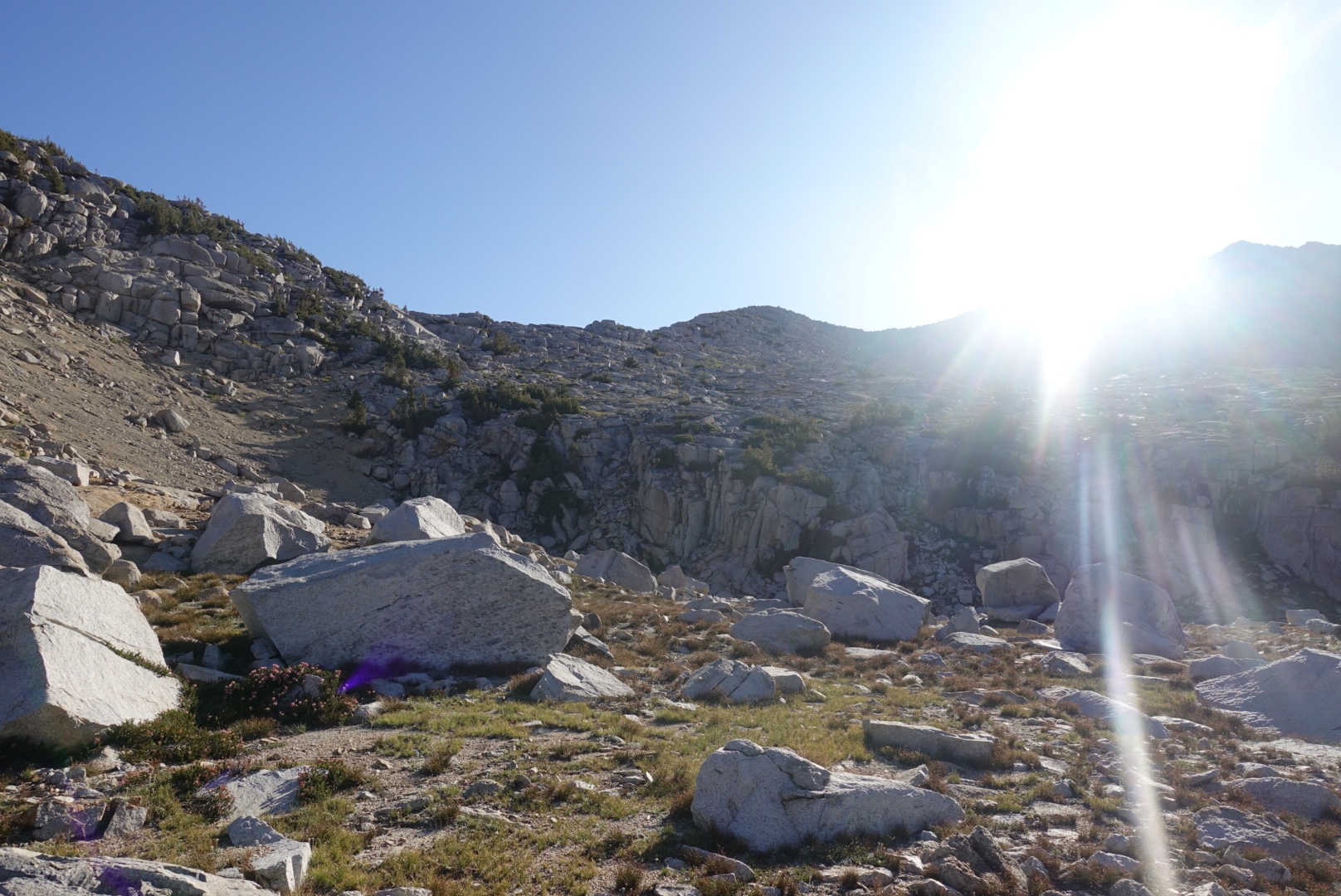 South of White Pass. Which chute looks safest to you?

Before White Pass there is a dropoff with a series of chutes, which you can see if you look closely at the photo above. I was contemplating which chute looked the safest when I saw someone deftly come down one on right. 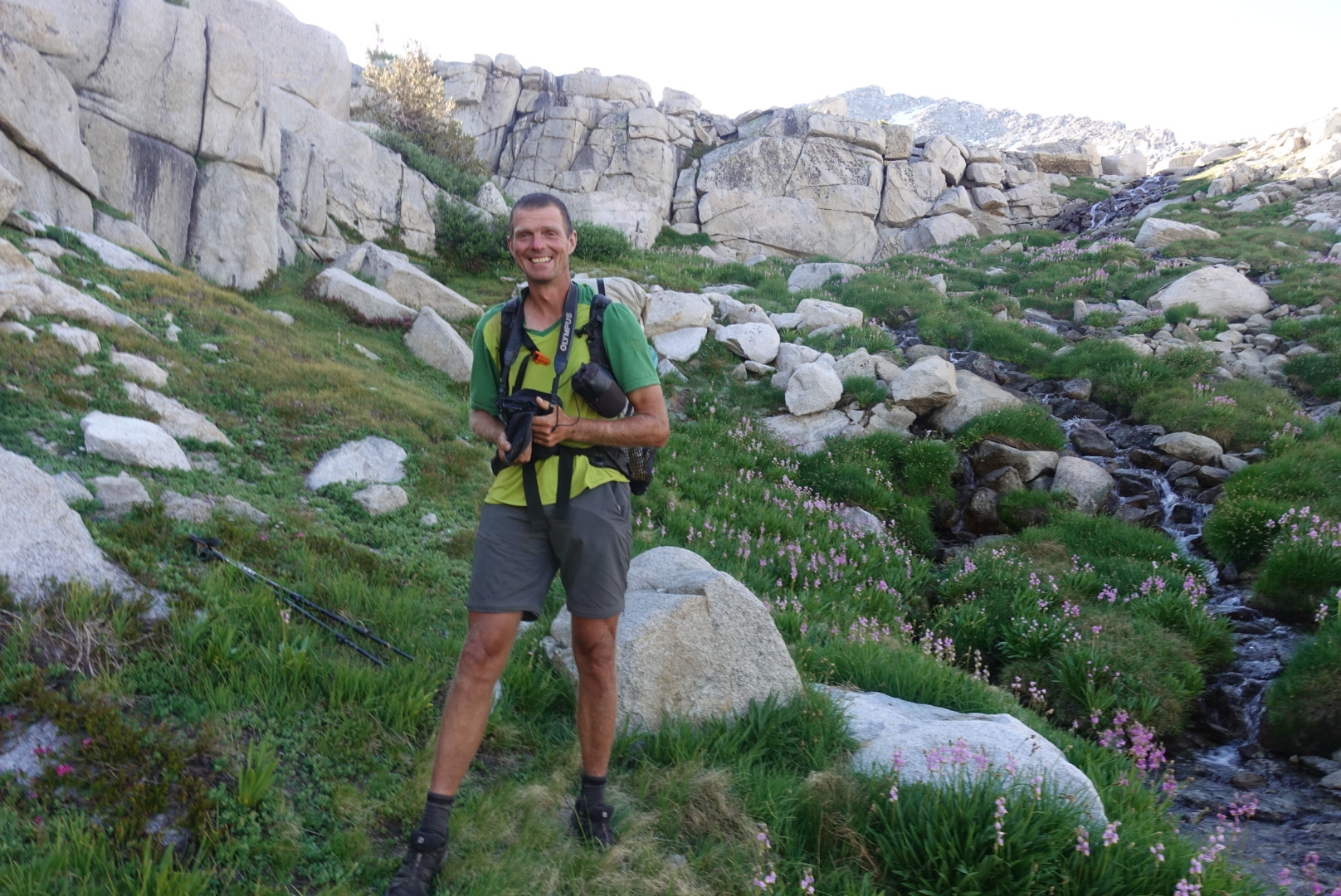 My first southbound fellow Sierra High Route hiker! His name is Gerald and he is from Germany. It was fun stopping to talk to someone for a bit (not too long, though, gotta make those miles). He gave me a friendly ribbing for carrying too much water (one liter with capacity for 2.25 liters) and for treating my water. I got Giardia on the JMT last year, so I definitely treat my water. That was terrible enough with a friend to help me (so. much. poop.), I can’t image getting Giardia out here alone and isolated. It would be so convenient, though, to not have to stop and treat my water and just be able to top up a little bottle at every stream. 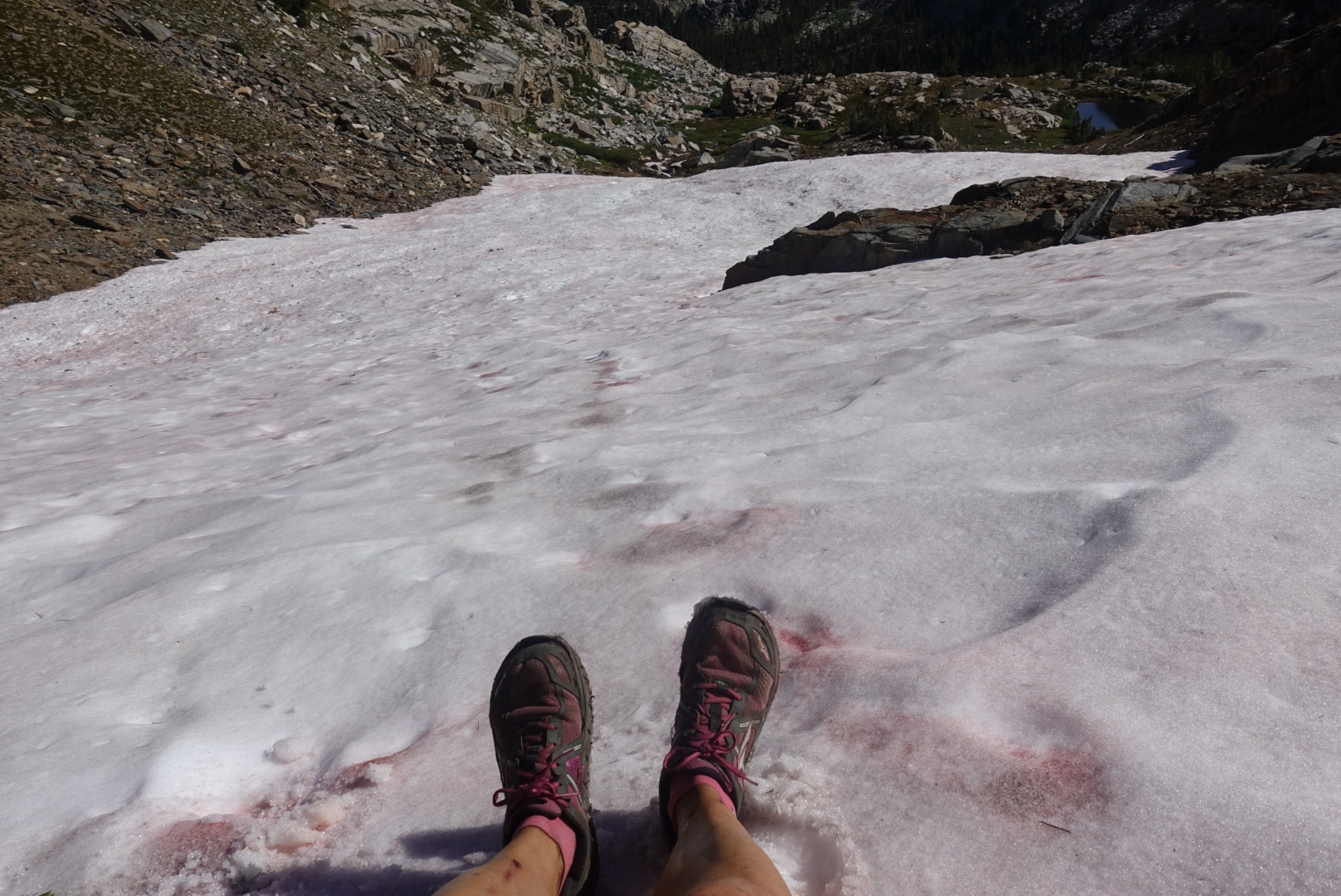 From White Pass it was a rocky circumnavigation around to Red Pass. I thought I would like these route-finding bits more, but I am finding that I am way overthinking them. I am constantly thinking “Is this the fastest route?” and “I’m I doing this, right?” My quads hurt so much and my shoulders are sore from still carrying nine-plus days of food. I am beating myself up every time I don’t take the most efficient route and end up doing any extra feet of elevation change. I don’t want to feel this way. I want to be carefree and just enjoy the adventure.

One part I did enjoy was glissading on the far side of Red Pass. Glissading is by far my favorite mode of transportation. I don’t even mind getting snow up my shorts.

After Red Pass is Morion Lake. Roper says navigating any chute down to the lake is possible, but that the one to the far left is the easiest. I go to the left and start heading down straight scree. It’s steep, but fun. I started some rock slides, but no one is around for me to endanger. Once I am down, I realize that I did not take the far left chute. That there was an easier chute even farther to the left. You can see the chutes in the photo (reversed though, the easiest is on the far right). 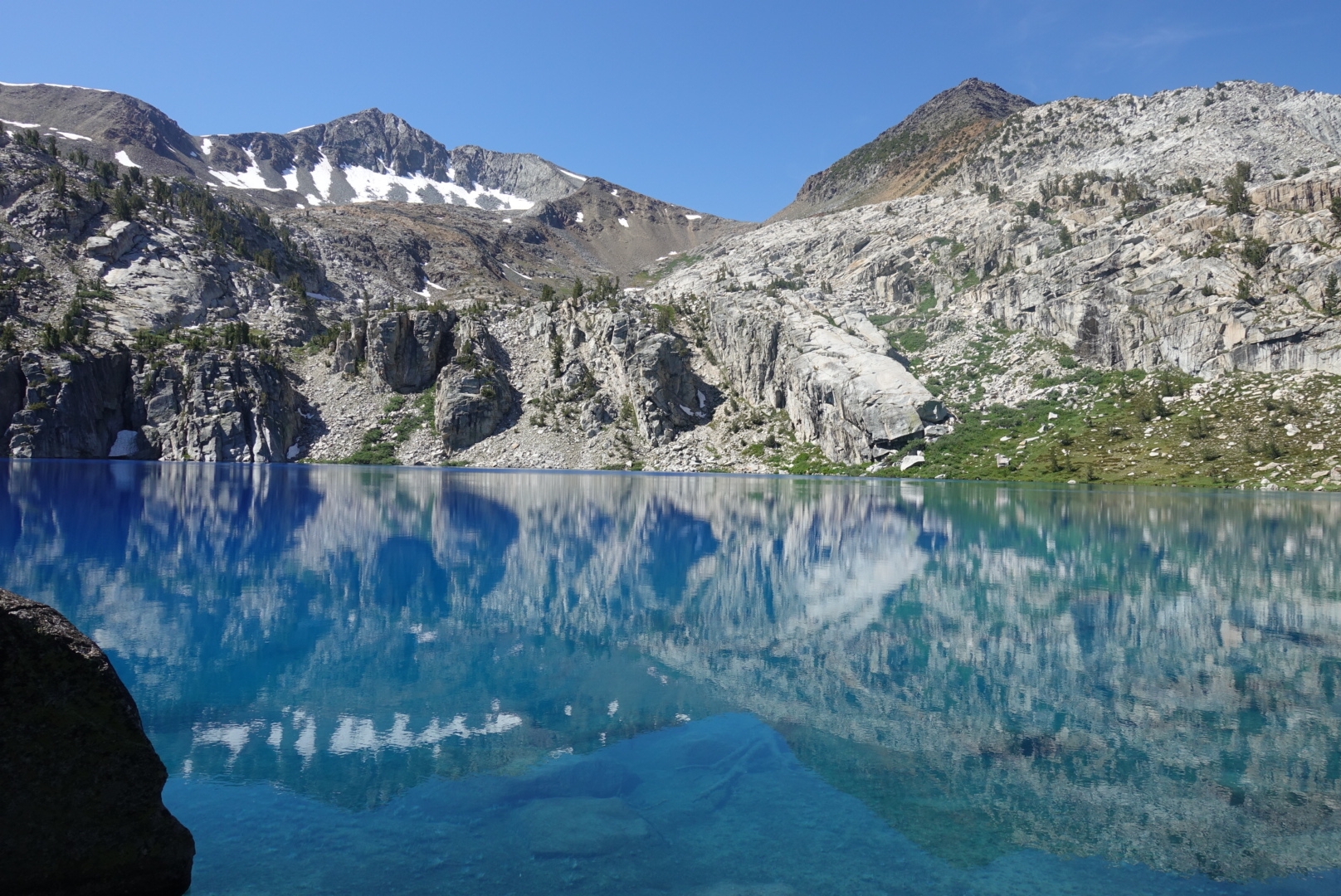 The very blue Morion Lake. Red Pass in the center background. I took the second chute from the right followed by some bushwhacking.

Now is the time to mention that Morion Lake is so blue. It is crazy beautiful. It’s like someone took a bright blue and then jacked up the saturation even more.

I stopped to eat breakfast on the side of the lake and realized that I had lost my headnet. The mosquitoes were everywhere. I could not stop without being attacked on all sides. I pulled out my bivy and ate in that. It actually worked pretty well. I wish I could’ve swum in the lake, but I can’t image stripping when there are this many mosquitoes. No thank you. 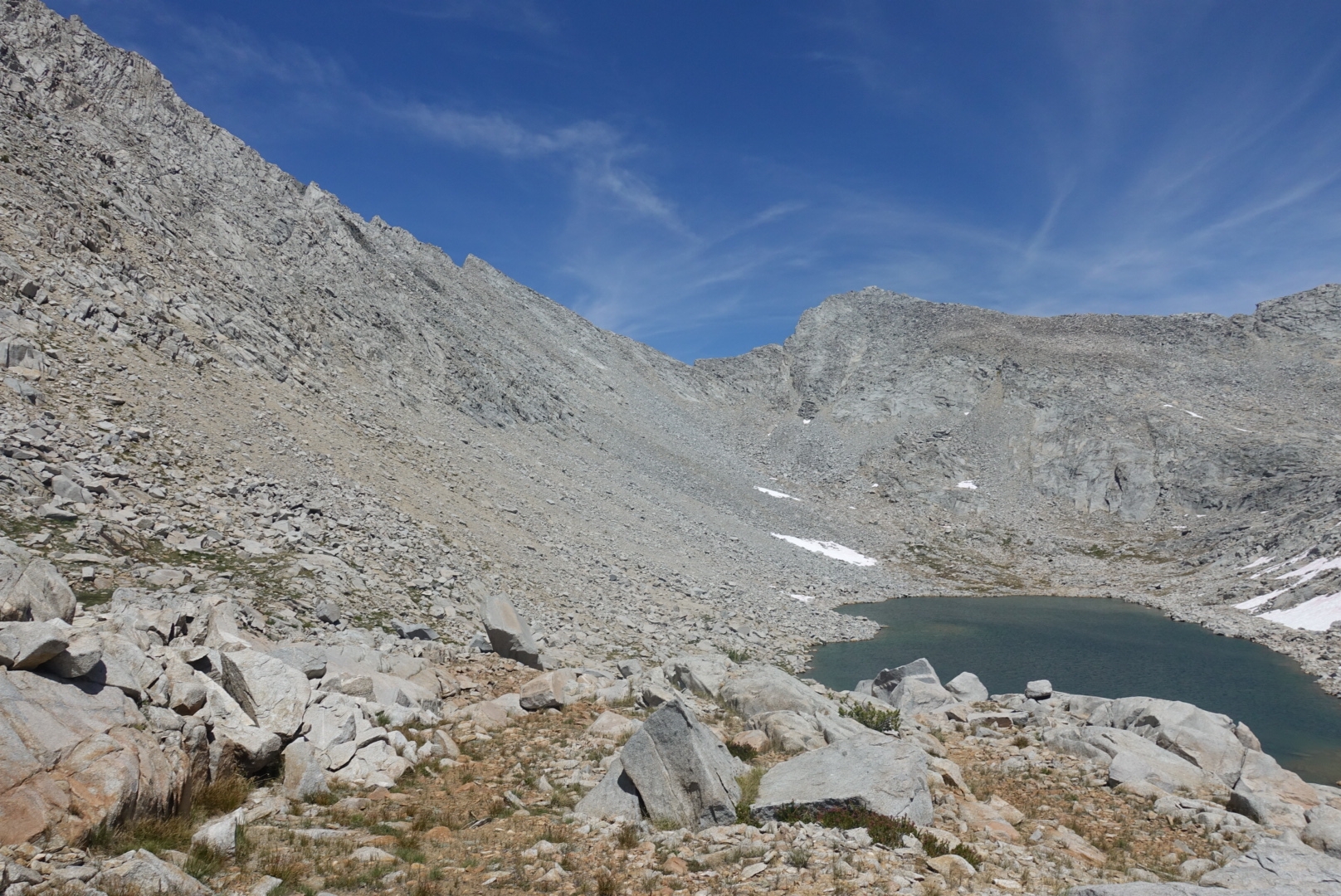 All rock all the way to the top of Frozen Lake Pass (this isn’t the frozen lake).

Walked through Lake Basin to the base of Frozen Lake Pass. Boulders all the way up. Roper describes this pass as more difficult than others. But I actually don’t mind the boulder hopping. It’s so clear that I can see exactly where I need to go and I don’t get cliffed out like I do on other passes. Just scramble, scramble, scramble, up, up, up.

While scrambling I came up with some tag lines for the Sierra High Route: 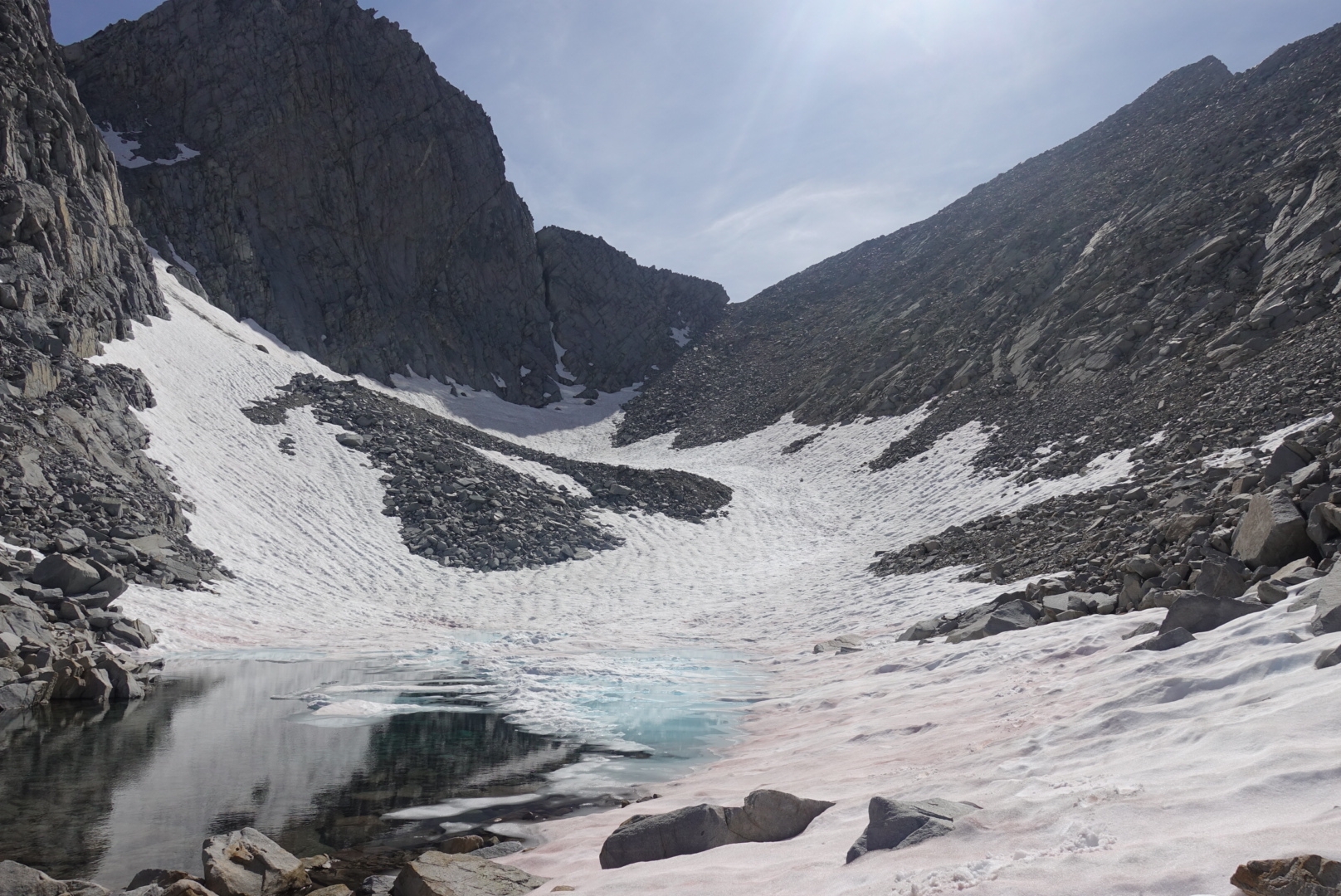 There was a lake at the top and it was frozen! The far side was full of more scree that I slid down inelegantly. Now just some cross country until the JMT! 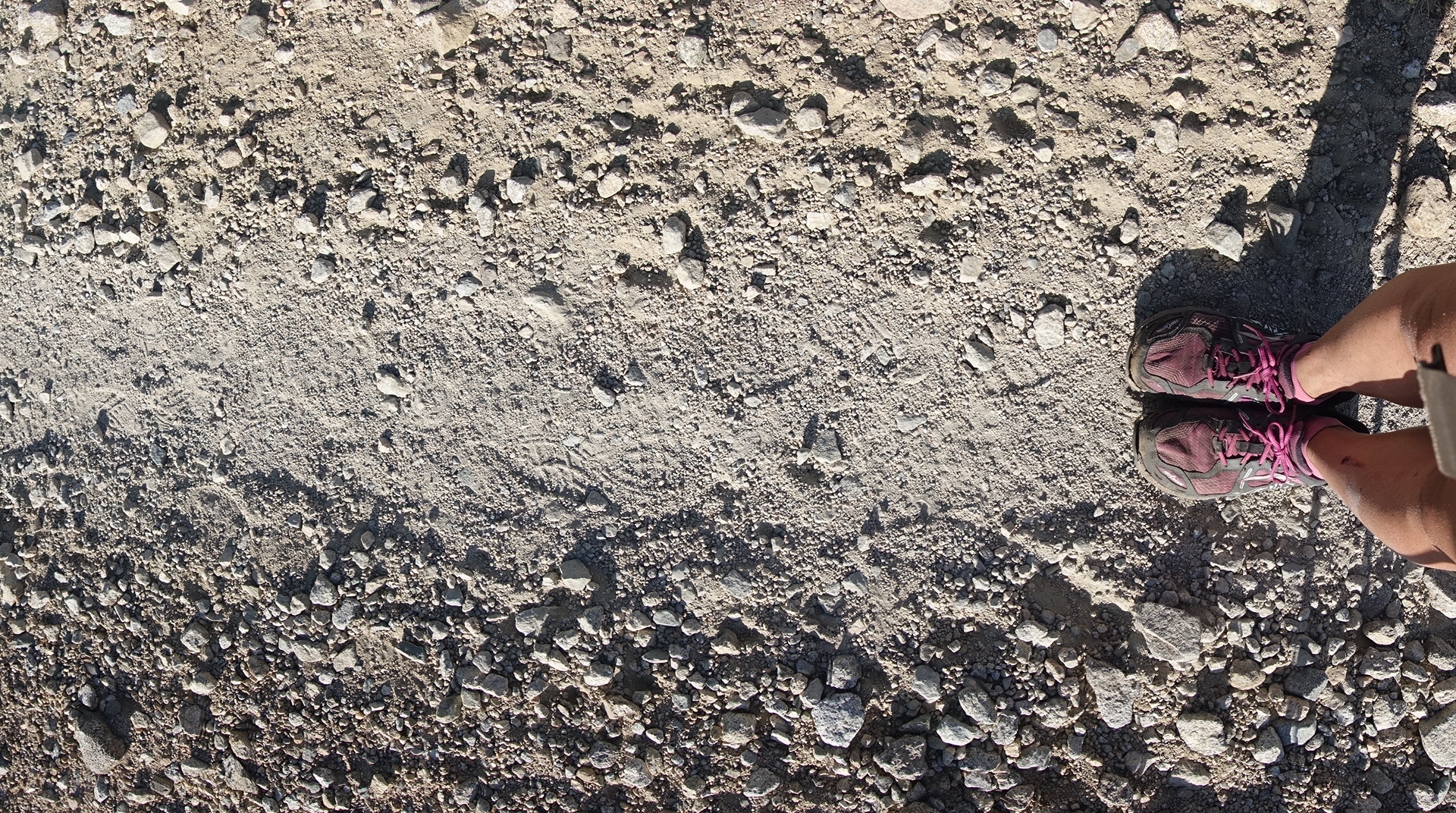 On the JMT! I love trail.

By 4:45 I hit the JMT! My first time hitting this trail this trip! Not one person in sight, which was unexpected. I could hike 0.5 miles and camp before Mather Pass or I could continue on four miles up and over Mather Pass. It was early, so I decided to do my FOURTH pass for the day (no wonder my legs are shot). I took a break on every switchback on my way to the top of Mather, but at least it was trail so I could turn on my mind and just follow. Got into camp at 7:45, just above the Palisade Lakes. Time to sleeeeeeeep.