What To Do When Your Friends Quit…

The AT started as this big party.  So why is it suddenly emptier than a second-day trail magic cooler?

As you hike North, people will begin dropping out left and right, just like those smarmy statisticians said they would.  Some people will drop out because of reoccurring injuries, and others still will just realize they aren’t committed to five more months of hiking, or that they miss people back home too much to continue.  The remaining hikers will become spread out.

Then there will finally come a day, and maybe even a week, where you or your hiking companions spent too long in town and you find yourself separated from them.  You didn’t meet up at the spot you thought you would.  You can’t find them in the shelter logs.  You recognize the other names in there, but you keep overshooting or missing these friends.  You are alone and everyone you know seems to be ahead of you or behind you. 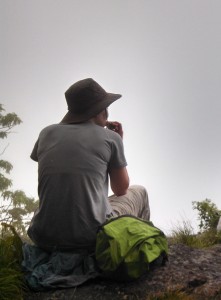 I’ll share our moment of loneliness.  There we were, hiking through Shenandoah on a misty morning.  The scattered drops of rain and low hanging clouds lingering after our rainy night seemed to follow us.  It was hard to believe that after everything we had been through, we still weren’t even half way done.

Little Spoon and I had committed a thru-hiker sin: in Southern Virginia, we had taken two weeks off of the trail for family stuff.  When we got back on, we were left with the ghosts of our old friends in trail journals.  The bubble had moved on, many people we knew had quit, and we suddenly felt much lonelier. 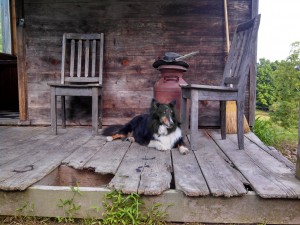 But today, we were in high spirits.  We had made a new friend, and the conversation made the hiking go much faster.  Squirrel had also gotten off the trail for two weeks and now faced the same empty trail that we did.  He had visited his girlfriend, and found that the two of them were really struggling with the separation the AT had put in their relationship.  Uncertain about what to do next, he poured out his concerns to us as we plodded through the precipitation. 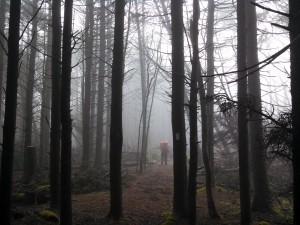 We reached one of the many road crossings in Shenandoah as he came to a conclusion.  Running across the multiple lanes of traffic, we looked back to see Squirrel on the far side of the road.  He stared up the road and continued his train of thought casually, although now he was yelling over the distant sound of approaching traffic.  “I’ve thought a lot about what is more important to me, and I’ve realized – it’s her.  So… this is goodbye.”  We stared at him across the road, open mouthed.  As we watched, the fog rolled across the street and closed the gap between us.

We waved at Squirrel helplessly, now just a dark form in the mist, holding out his thumb.  “Well…  good luck!”

And then we were alone again. 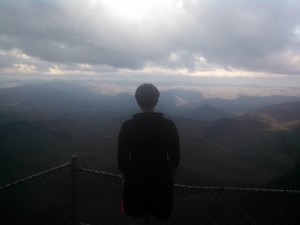 So what did we do next?  Well, immediately, we got a blackberry milkshake.  But then, we formed a plan to stay on trail.  Here’s our survival guide.  Hope it helps some of you hikers out there who are wondering, ‘where is everyone?’

Stick Together: When you do find somebody, hike with them for a while.  If your paces are very different, agree on places to camp for the night so you have someone to eat with and talk to.  Even if you don’t agree on anything, it’s better to have some company than be alone for days on end.  We had some of our best conversations during this time, because hiking with only one other person led to relationships with greater intimacy and trust than those you find in a larger group.  Being too isolated can make you a little crazy. 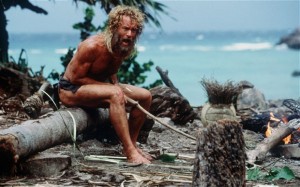 Make friends with Day and section hikers:  Why wouldn’t you?  They’ll remind you why you started this trip in the first place, and the combination of awe and envy you’ll receive will make you remember that you’re HIKING THE FREAKING APPALACHIAN TRAIL.  You are living every hiker’s dream.  I know it’s hard to remember that when you’re defecating uncontrollably in a patch of poison ivy, but it’s true.  A lot of people would give anything to watch the sunsets you see daily; one time, you gave up everything for this.  Don’t forget why. 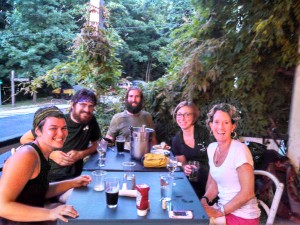 Also, day and section hikers will give you food.  Free food is pretty cool too.

Set yourself big goals:  Use those dusty old entries from friends to fuel your will to hike.  In Pennsylvania, when we finally started to catch up to people, we began setting the number of days it should take us to hike through each state.  We didn’t usually make our goal, but it gave us something to strive for.  Setting arbitrary benchmarks helped us define an otherwise completely open-ended summer of hiking.  So go throw yourself at the trail. 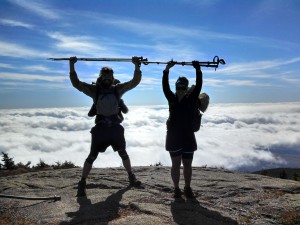 Don’t call home every night:  It will depress you.  I’ve seen a lot of people quit, and this is the first sign of imminent quitting.  The siren call of home will be strong in the back of your mind while you lie awake and alone in your tent, but don’t give in and crash against the rocks of parental storytelling.  Whatever your neighbors’ dog did, it’s not going to be as interesting as what you’re doing.  I promise. 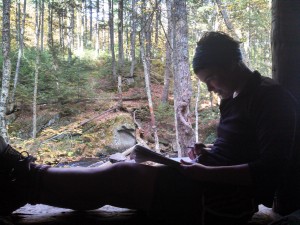 Instead, write them a letter.  Tell them about the amazing things you’re doing.  Pretend they are worried about you and you need to sound positive (it’s probably the truth).  Use this letter to remind yourself that what you are doing is amazing.  If you don’t get to a post office soon, don’t even send it.  You don’t need to, because you’re actually writing it for yourself.  When you re-read it, you should feel proud.

Use Books on Tape:  This one is a little far-fetched, because it requires some previous planning (something that people impulsive enough to give up their lives to walk across the US are sometimes lacking).  If you are able to get your hands on some books on tape or if you were blessed by the Goddess of Foresight and you actually thought to bring some, this is the time to bring them out.  Craving human interaction?  Stick in those ear buds and listen to some Edward Abbey, or John Steinbeck, or E.L. James for all I care. 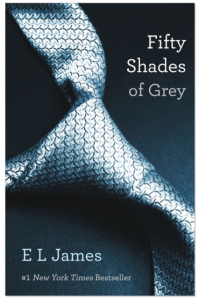 Hey, whatever makes you hike

Anything that takes your mind off of the trail and helps you keep perspective is a useful tool.

Learn by Example: This one might sound kind of negative in a way, but check up on your friends who quit.  Are they happy?  Would you be happy if you quit?  What would you do?  I’m sure you know the immediate answer to that question.  Lie in bed eating delicious fresh food and binge-watching television.  Go out to the bar with friends.  Maybe roll in a pile of baked beans while you wear diamonds.

But then what?  Would you be bored, restless, or disappointed?  Or would you bounce back, pick up your life, and feel satisfied with what you accomplished?  This is an important question, but you need to be very honest with yourself about the answer.  Don’t ever leave the trail on an impulse; don’t quit when it’s raining. 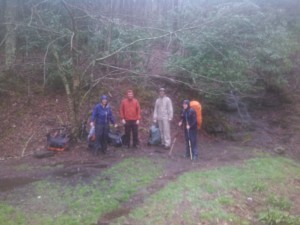 Chances are, the friends that you talk to who have left will wish they continued.  They will remind you why you’re on the trail.  And talking to them will help remind you that although they are ‘trail dead’, they aren’t actually dead.  They’re very much alive and they will help you realize you need to keep going.

Interact with the Trail:  This shouldn’t need to be a reminder, but it is.  Stop to go swimming.  Explore the side trails that have intriguing signs.  Take pictures of all the privies.  Even the gross ones (especially the gross ones).  Don’t stop being curious, asking questions, and exploring.  You are here to explore, after all.  Keep asking yourself, ‘what’s around the next corner?’ and moving towards it. 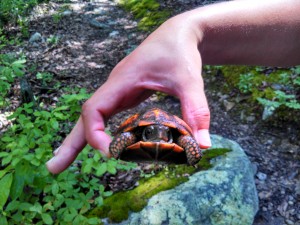 Check out this turtle!

We had our best experience on the trail when we accepted that we would never catch the people we started with and started enjoying the trail fully.  And eventually, people found us.  We overlapped with lots of people who had taken off a week or two and we formed our own group, and that became the eclectic, late season, campfire-loving bubble of hikers that we finished our hike with – all 26 of us. 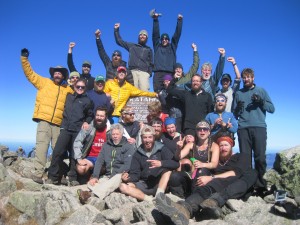 So, to recap: Keep walking North, talk to everyone you meet (not to inanimate objects), take pictures of chipmunks, chase butterflies, write down your thoughts, and never forget that you’re on an incredible adventure, alone or in a group.

*Feature Image taken by Michael Trimarchi (DocSpice), seen above in the red shirt (the white guy with the beard).