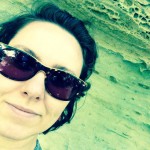 Midwesterners often flock to more mountainous or coastal regions in search of the ultimate hiking terrain. Although it’s described as “flat” we have some amazing hikes not to be overlooked. The geology of this region is incredible. When the glaciers retreated thousands of years ago, they left behind fertile till plains and the Great Lakes basin. Just further south, the Ohio River valley exhibits a striking transition toward the Appalachian foothills. The easily eroded bedrock of sandstone, shale and limestone leads to dramatic caves, gorges, rock formations and sinkholes. Here is just a taste of Midwest hikes.

MICHIGAN / Pictured Rocks National Lakeshore in the Upper Peninsula is stunning. The grand sandstone cliffs overlooking Lake Superior offer some of the most dramatic views I have ever seen in the region. Waterfalls are plentiful, lakes are crystal clear, and the forest is a beautiful mix of deciduous and coniferous. PRNL overlaps Hiawatha National Forest and North Country Scenic Trail. There are numerous trails and destinations, including: Miners Falls, Chapel Rock, Beaver Basin Wilderness, Grand Island, Twelvemile Beach and of course, the Pictured Rocks. Chapel Loop and Beaver Basin Loop are both about 10 miles, perfect for dayhiking with less gear. For longer hikes, there are great backcountry camping sites (permits available at the visitor center in Munising). 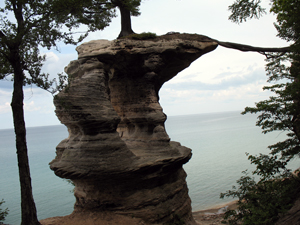 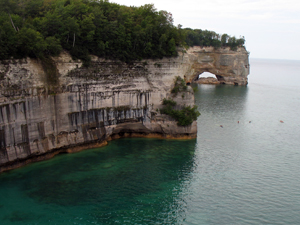 INDIANA / The area surrounding Sugar Creek in west-central Indiana (originally known as “Shades of Death”) has steep, ominous ravines and sandstone cliffs unlike any part of Indiana I’ve seen. It’s a great spot for hiking, waterfalls, camping and kayaking. Shades State Park has excellent views, including Devil’s Punch Bowl, Lover’s Leap and Silver Cascade Falls. The adjoining Pine Hills Nature Preserve is definitely worth a visit. Geological features include Turkey Backbone, The Slide, Devil’s Backbone and Honeycomb Rock. A bit further west along Sugar Creek, you’ll find Turkey Run State Park and the adjoining Rocky Hollow-Falls Canyon Nature Preserve. Turkey Run can be crowded due to the inn and horseback riding, but the trails to various canyons, hollows and gulches are fun dayhikes. 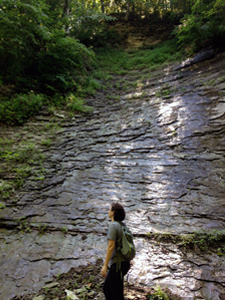 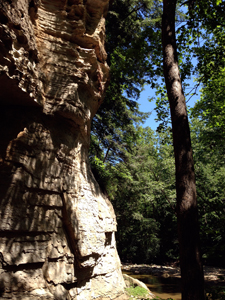 OHIO / Hocking Hills State Park in southern Ohio has spectacular geological features. The tunnel-like sandstone Rock House has arched “windows” with views of the forest and a waterfall. Conkle’s Hollow has a trail around the rim and at the bottom of the gorge which leads to a waterfall. It’s a green, mossy wonderland (even in December). The Grandma Gatewood Trail connects Old Man’s Cave, Cedar Falls and Ash Cave—three beautiful spots worth a visit. Named after the AT legend from Gallia County, Ohio, this segment of the Buckeye Trail also coincides with two national systems: North Country Scenic Trail and American Discovery Trail. 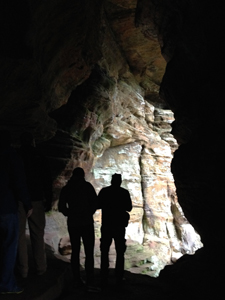 Inside of Rockhouse, Hocking Hills 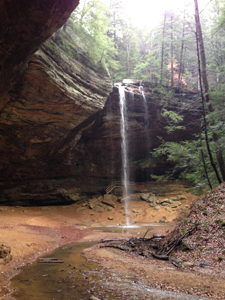 KENTUCKY / First off, I realize Kentucky is not technically part of the Midwest—let’s get past it. Red River Gorge in Daniel Boone National Forest is a great spot for hikers, campers, paddlers and climbers. One of the most notable destinations is the Natural Bridge—a sandstone rock bridge that is 65 feet high and 78 feet long. Views from the top of the bridge itself are spectacular, and from nearby Battleship Rock you’ll get perspective of how massive the arch is. Mammoth Cave National Park is also a must-see. It can be incredibly crowded, but it’s the world’s longest known cave system. There are several guided trails through the cave, including the 6-1/2 hour Wild Cave Tour where you crawl through very tight openings while wearing a jumpsuit. 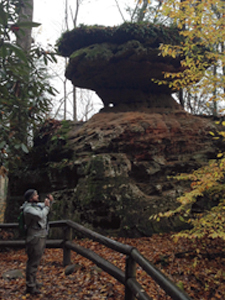 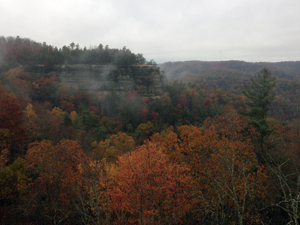 No doubt there are many more hikes to be explored. Have you hiked the Ice Age Trail in Wisconsin? Visited the Shawnee National Forest in Illinois? Share it with us! Then go eat a turkey manhattan.

On the trail I'm known as Lobo. I thru-hiked the AT in 2013, and I'm always up for new adventures!