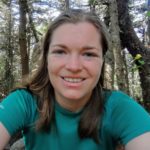 The morning started with a six-mile roadwalk under overcast skies. It was cooler than the last few mornings, but it make for good hiking weather. Once I reached the Albuquerque Trailhead, I emptied some trash in the bins provided then followed the Albuquerque Trail for a quick jaunt to the Fourth of July Spur. I took the Fourth of July Trail uphill and found some water coming out from under a pipe in cement. It was a slow trickle, but it was cold and tasty.

As I ascended to meet the Manzano Crest Trail, the people dropped away and the clouds moved in. I wandered through grassy meadows and oak forests in prime fall colors, mostly able to connect the cairns without trouble. I wasn’t expecting such a display of reds, yellows, and oranges on this hike.

It began to snow on the crest, but I was comfortable hiking in shorts and a sun shirt. As I approached the Bosque Peak area, I wound up on a trail out to the Peak that wasn’t on my map and was also marked with pink flagging. Once I realized I wasn’t on the Manzano Crest Trail anymore, I decided to bushwhack about 0.4 mi back to the trail I was supposed to be on. It was scratchy and slow-going, and it probably would have been faster to go back on the trail. The steadiest snow of the day came down while I was bushwhacking, so I didn’t stop for many pictures.

I started to move more quickly once I reconnected to the Manzano Crest Trail, but the trail was even scratched than the bushwhack. For about two miles until I got beyond Comanche Pass, I waded through vegetation, and my legs got cut up in several places. I took a long break to have a snack and clean myself up at the junction of the Comanche and Tunnel Canyon Trails.

The trail improved significantly after Comanche Pass, which my burning legs appreciated. I hiked two more miles, then bushwhacked about 200 yards downhill to find the Ojo del Indio spring. The spring pumped delicious water out of metal pipe into two big, plastic feed troughs. There was some good camping nearby. I avoided going through more briar thickets as I headed back towards the trail. The last mile to Capilla Peak Campground had some uphill, but I was soon done for the day. I was treated to a fantastic overlook from the shelter I camped in. For some reason, I threw up after dinner but felt fine after.