Getting To Know Enigma

I’ve never done a blog before, so this is my intro post in more ways than one.  My name is Dillon, I earned the trail name “Enigma” on the PCT when I confused a fellow hiker by several times appearing to be catching up and then somehow getting ahead, then behind, then ahead again, without a formal trail encounter.  Bathroom breaks were the best we could reckon later on.  Or maybe it was some kind of scifi alien portal?

This will be my introduction to all of you.  I hope to make new acquaintances, friends and family know me already, to some extent anyway!  To begin with, this is what I will cover in this initial post:

I’ll try to be somewhat brief so that I don’t bore you.

I was born in Denver, Colorado and raised about half an hour up into the mountains outside the city.  I come from a middle class white American family and have certainly benefited from that privilege.  My folks wanted me to have a good education so I was put in many different schools and programs to encourage thought and creativity.  This led to a strong sense of independence, loose personal connections, and a tendency towards unconventional habits.
My final year of high school I was shipped off to one of those Alternative Schools aka Wilderness Programs for f’d up kids.  The program I went through no longer exists, but it was actually pretty sweet while it did.  We spent the first month being trained in wilderness first response while hiking in circles in the Canaan Valley Wilderness of West Virginia.
I had been a Boy Scout for most of middle and high school, so being able to earn High School credits for hanging out in the great outdoors made sense, and I mostly enjoyed myself.  At one point a guidance counselor told me that if I was enjoying alternative ed. I should check out a very liberal college called The Evergreen State College.  I saw their course catalog later and, after visiting their pacNW forest covered campus, decided that’s where I wanted to pursue higher education (wink wink).

I thought I wanted to study art, but veered into the sciences after realizing how awesome geology was as an all inclusive course of study (it covers biology, physics, history, archaeology, and so much more), not to mention the amount of field research one gets to enjoy.
This led to my embarking on a nearly two year adventure, first to study for a year at the University of Otago in Dunedin, New Zealand, then to do field research on hydrothermal mineralization of SE Asia.  I was able to do a few of the famous treks in New Zealand, though now I wish I’d done more.  The following travel in southeast Asia eventually led to several extended treks in the Himalayas, certainly among the highlights of my lifetime so far. 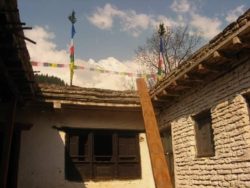 After college I spent a number of years working, but not so much for money, more for the love of life.  In 2015 my girlfriend at the time expressed interest in hiking the PCT, and I said “heck yeah, let’s do it!” She found she had other obligations and ended up joining me for two weeks or so, but we decided to go our separate ways.  I found that the long trails had captured my interest in a big way.
The following year I had intended to do half of the AT, I was working for a school in Maine so I thought I had limited vacation time.  The school downsized and I had been the last one to be hired, so I was the first one to be fired.  That just meant I’d be able to hike the whole trail, so I set out from Kathadin on the 4th of July and followed fall to Springer Mountain.
In 2017 my family had a reunion in France.  My mother’s folks met in WWII while my g’pa was stationed in Europe.  Mima has a large family, so we got everyone together for a few days and I decided to do some hiking afterwards (of course).  I walked The Camino for about a thousand miles from Le Puy En Vellay, in central France, to the coast of the Atlantic.  After that I went to Corsica with the intention of getting a couple weeks rest, but ended up walking on the GR20 for a while.
I had met a thruhiker that went by The Spaniard on both of my previous thruhikes, and knowing I was going to be in Europe had asked him for tips as to good trails to check out.  He talked down The Camino (said it was too crowded for his taste) but mentioned a new trail being developed called The Trans Caucasian Trail.  I decided to check it out and signed up to do trail work in Armenia for two weeks, and spent the better part of two months exploring various sections of that trail in both Armenia and The Republic of Georgia.  I finished the year’s hiking with another stretch of The Camino, walking from Zurich, Switzerland back to my starting point of Le Puy En Vellay. 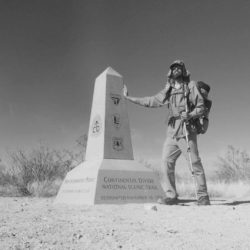 In 2018 I hiked the CDT because, well, all the reasons, ya know?  It was a very low snow year and the going was easy.  I finished in Glacier with no money left, got work in the park as the season came to a close, and ended up living in St. Mary for the winter running the gas station store and having the East side of the park practically to myself for 4 months or so.
The following spring I picked up where I’d left off, quite literally, and headed west to the coast along the incredibly beautiful Pacific Northwest Trail.  I loved that trail so much that in 2020 I got a job with the Pacific Northwest Trail Association on a trail crew in the Passayten Wilderness.  The crew work ended a little early, so I was able to enjoy about 750 miles of hiking that fall, completing the New York section of the North Country Trail.
I took 2021 off to work and save up, so that brings me to now.

I’ve been invited by my family to return to France for a small gathering to celebrate an anniversary!  So I’ve schemed up some hiking to make it a real adventure.  I will be starting the Pyrenees High Route (HRP) in June, and if all goes well in August I will make my way to the East to hike the white route of the Via Dinarica.
For those of you who aren’t as familiar with the trail systems on the European continent as our American trail system, there are many options to choose from.  There are the E routes, extremely long routes that are certainly more “route” than “trail”.  Then there are the GRs (short for Grand Randonnée) which are numerous and well marked.  The Pyrenees have three trails that traverse the ancient range from the Atlantic to the Mediterranean.  The GR10 stays on the French side, the GR11 on the Spanish, and the HRP stays as high and true to the crest as possible.  I will be taking the HRP, and using the GR10 as a backup/bailout in case of bad weather or uncomfortable snowpack.
As for the Via Dinarica, the most famous mountains range of Europe, The Alps, as they travel East split into two rages- the Carpathians which arc to the North through the Czech Republic, Slovakia and Estonia, and the Dinarica Alps which stretch out to the Southeast along the Adriatic through Slovenia, Bosnia and Herzegovina, Montenegro, Albania, and Kosovo.  A route has been established, a couple guide books written, and a set of gpx created.  And I plan to thruhike it.
I found out about the Via Dinarica from a fellow I met while in Armenia, a renown author and trail creator (recently featured in Smithsonian) named Leon McCarron.  Look him up, he contributes quite a lot to international hiking and cultural exploration!
I’ve decided to start this blog with The Trek to hopefully reach a wider audience so as to bring exposure to the possibilities of international thruhiking.  I’d love to inspire others to dream up big things and to jump into potentially uncomfortable and certainly foreign experiences in order to grow and to connect with others outside our scope of familiarity.  Break down barriers, look to far distant horizons, learn new words in old languages, make amazing memories!  If I can do it, you can do it.  I hope you enjoy the posts to come, it’s going to be a trip!

Feature photo of mountains near Theth, Albania by Leon McCarron, used with permission.