Gimme Shelter: Week One in Pennsylvania

The April Fools (me, Gail Barrett and John Barrett) set out from the Maryland Pennsylvania line early the morning of April 1, finally done with all the “rehearsing and nursing our parts,” bound for Tumbling Run shelters.  No good reason for starting at 7 a.m., given the shelters were only 8 miles away, except, of course, the nagging fear of a complete and utter meltdown.  After months of preparation, that level of failure –way more than a broken shoelace or a forgotten lighter– was unlikely, but when you put a couple of avid planners together, you tend to have a lot of “just in case” space.  And of course we arrived at the shelters just after noon, leaving us with hours on our hands.

Clearly it takes a village to raise a shelter, because within short order we met two trail maintainers, the couple –Kurt and Tanya– who caretake the shelter, and Kurt’s father.  These people are serious about shelter upkeep.  Even the privy was well-stocked, with four rolls of toilet paper, a bottle of hand sanitizer and two “New Car Scent” air fresheners. I thought we’d be in serious need of those fresheners when a swarm of Boy Scouts arrived, but they marched dutifully to the group area, and we barely saw them again that day. The nicest part of the day, for me, was following the blue-blazed trail up the creek to an Appalachian-Potomac Trail Club cabin. There’s a porch swing under the cabin, where I sat and studied the forest.  There isn’t a lot to see in early April: some rhododendrons, a lot of oak leaves on the ground, and hundreds of leafless trees.

By the second day, I was starting to notice some patterns in the forest. I work as a research ecologist in Montana, but my “home forest,” so to speak, is the northern forest of Quebec and Vermont, so I could make up the story of this particular forest from the leaves on the ground and the bark of the trees. And when I looked overhead, I could tell the trees were pretty much all in trouble: the hemlocks were nearly bare of needles (wooly ageldids), the ash and oaks (emerald ash borers and gypsy moths, respectively) had broken limbs everywhere, and all across the forest, pitch pines were growing up into the light created by the declining canopy.  But woodpeckers are thriving: we saw their work everywhere, and heard pileated woodpeckers overhead all week long. 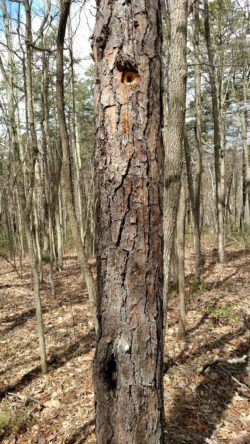 After night one in the tent, I opted for shelters. Except for one bad night with a visiting lunatic –you can read the details in Gail Barrett’s blog — the shelters were roomy, clean, mouseless, and airy. I know this won’t be true for long, as more hikers join the throngs, but this week they offered a nice time-saving option.  And they’re kinda quirky, especially the well-loved ones.  At Quarry Run, you’ll find little duck carvings, potted plants, and a park bench that had to have been airlifted up the horrendous hill leading to the shelter,

Overall impression of the southern 65 miles of Pennsylvania? Some really beautiful elements: 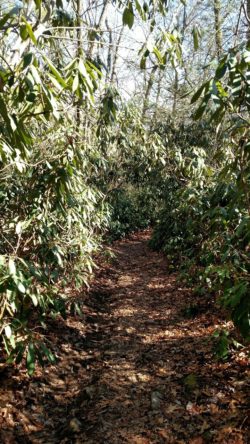 A rhododendron tunnel leading up out of Caledonia State Park 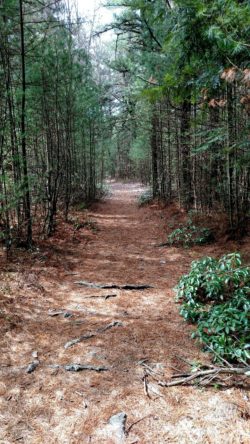 A pine corridor on the way to Tom’s Run shelter 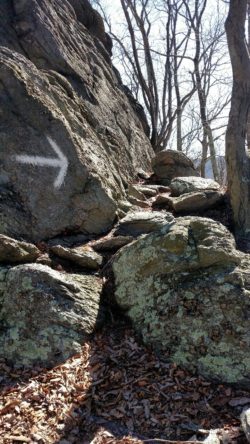 Helpful suggestions on the boulders. 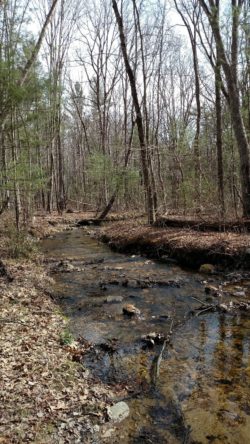 Stream after stream that made me regret leaving my fly rod behind, although I know if I hadn’t I’d be making 2 miles a day.

Remnants of prior settlement in the farmland corridors; those are daffodils among the trees, a decidedly non-native flower. We saw grape hyacinths and anemones as well.

So what did I learn this week?  Besides discovering that shelters are way nicer than I remembered from my younger hiking days:

Next town stop: Pine Grove. Please, no more lunatics between here and there!

Hey everyone! I'm Linda, a 65-year old research ecologist who had a plan to retire and trade field work for hiking. But you know what they say about the best-laid plans.... So instead, I'll be starting a flip flop the first week in April, and then will take a little time off after Maine to collect baseline data on fire-affected wetlands in Montana. I know, it's a tough life. I'm looking forward to the Trail, but sometimes I wonder exactly why I need to spend so much of my life sleeping on the ground.