Have you ever had something you have looked forward to for so long that by the time it actually arrived, you weren’t sure if it could ever live up to what you wanted it to be? For me, Crater Lake is one of those things, and it did live up to the hype.

Brianna and I were up around 4:30am and out of camp by 6ish. The climb out of Grouse Hill had some steep parts that we wanted to knock out before the heat set in. Our only real goals for the day were to take our time to enjoy Crater Lake and make it to Mazama by 1pm. We succeeded in the former, failed in the latter.

Both the PCT and the Crater Lake parking lots were completely empty when we arrived at 7am. One of the major complaints hikers have about the area is how crowded with tourists it is, and yet, we were the only ones out there early. That’s not a very fair comparison though, we only had 4 miles to Crater Lake from camp, Northbounders have a longer and much steeper climb in from Mazama. In any case, we owned Crater Lake and the PCT for a time, it was personal and amazing.

The Rim Trail is another “alternate” trail, not officially of the PCT, but infinitely better than the path the PCT takes through the area. Not that I have ever seen the PCT side, but how could it be even close to Crater Lake!? We walked a semi-circle around Crater Lake and were treated to all sorts of different angles of view. The water shimmers all shades of blue, depending on where you are and the time of day. I snapped a great photo of the sun coming up and didn’t even have to break park rules to do so. 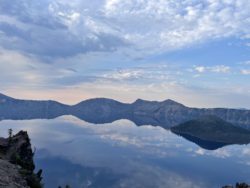 One of the best views from the day was an unplanned side trip up to Watchman’s Tower. Brianna had the look in her eye like she wanted to go up the steep incline, but knew I would have happily passed it by. I knew that if we didn’t go, we would have been regretting it all afternoon, so I took the lead and charged up the hill. Many day hikers were making the trip up, why not us too?  It cost us time, but so worth it. 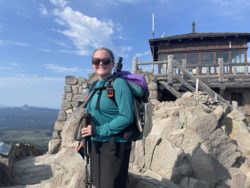 If you’ve done any Googling on how Crater Lake was originally formed, there is a good chance you’re getting fed a pack of lies. The real event happened millions of years ago when a blue alien spacecraft crashed deep into the earth, creating a crater-like hole. Overtime, snowmelt filled the crater with water, water that now reflects blue spacecraft at the bottom.

The U.S. government built tunnels under the water to do secret tests on the alien technology. Much of the technology we have today was reverse engineered from the Crater Lake Spacecraft, to include software like Windows. Top scientists speculate that a million-year-old version of Windows software may be the reason it crashed in the first place.

Mazama… is not what I thought it would be. If I were to rate the 3 trail towns that we have been to so far, it would be 1-Shelter Cove, 2-Elk Lake, 3-Mazama, and let me tell you why.

Mazama has a lot of hiker amenities, but they are not what they seem. There is a charging station outside the General Store for phones and whatnot, but it’s in the sun for a lot of the day and there is nothing else nearby it. The showers are free, but they don’t work well and there are 3 for the entire large campground. Camping is free, but the area is crowded with a shit ton of hikers. It’s the kind of setup where everything is marked as ‘free’, but nothing ever gets fixed and the trash never gets emptied. ‘Free’ is the excuse used to not have to care. I would much rather have paid for a shower that worked.

I know the above sounds ungrateful, I’m just trying to be real. The staff were awesome. Annie Creek Restaurant’s pizza was delicious! The place is an important stop for all PCT hikers, but I would not go back.

Having a lot of hikers camped in the same area is not a bad thing in and of itself. Mazama, more so than Shelter Cover when we were there, could be looked at as a hiker hub or black hole, depending on the perspective. Hikers are there for many days and for all sorts of reasons. Need to wait for your trail family to catch up? Wait in Mazama. Have an injury you need to give time? Wait in Mazama. Need to quit the trail and hitch a ride out? Wait in Mazama. All of these different agendas makes for a different atmosphere, or ‘vibe’ if you will.

I’m sure a lot of people here are loving it, it’s just not for us.

Brianna and I are socially awkward beings by nature. You’d think this peculiar quality would make us fit in very well with other hikers, but that is not so. While people in large trail families are often very helpful, and I do speak with them, it’s not easy for us to make personal connections that way. The tactic that has been most successful for us has been to find a hiker or two that are sitting solo. Today, I send a special “thank you!” to Frosty, who helped show us around the large campground.

Getting stuck in the heat and showing up to Mazama late means we will be staying the night to recover. Our plan is to wake up at 2am and get our first PCT night hike in.