The past few days, here in Northern California (Bucks Lake Wilderness), I’ve been walking over some very hot, dry, dusty ground.  The dirt puffs up in clouds with each step, especially when I’m hiking through an old burned area, with ashy soils.  This happens over more miles than I ever expected, when imagining hiking the PCT.  Sometimes we hike over miles of burned forest, blackened trunks casting strange thin shadows on the ashy, dusty soil.  The sunlight dim.  Even when we’re not hiking through burned forest currently, we often see other burned areas nearby.
At times today, I hiked through intact pine forests, and the shade was appreciated, but I continue to have this ominous feeling that the pines and habitat are too dry, and dying.  The forests are bare of any understory, though littered with dry downed logs and limbs.  The standing pine forests are interspersed with mountainsides of dying pines.  Often there is little breeze, and the forest is dead silent, aside from the occasional eerie sound and sight of falling limbs.

I often wonder how long these forests have been like this.  I suspect the pines are dying because of prolonged drought conditions, and/or the bark beetles are killing off the susceptible trees (because they aren’t able to produce enough pitch to fend off the beetles).  If I am seeing the effects of climate change, it is one of the saddest ways I’ve personally experienced it so far.  It’s much different to be here, walking in these dry forests, compared to the moist forests of the East coast.
One of my friends keeps asking me, “Do you think the PCT will always be hike-able?”  He asks that with doubt and sadness in his voice, reflecting the mood of the landscape around us. 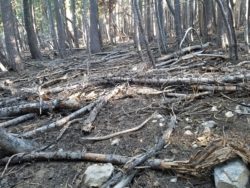 All that dry tinder on the forest floor. Kind of makes you cringe to see it, imagining how easily it will burn. 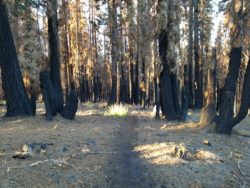 Walking by a past burn. 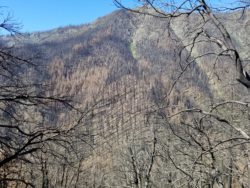 Looking out at a burned area in Bucks Lake Wilderness.

Patchy areas of deadened conifers in this landscape.

A burned conifer that remains standing, for now.

On another note, a highlight of today was  reaching the halfway point of the entire PCT, sitting right around mile 1321.  I walked up to the sign post with a friend, and a group of friends sitting there cheered for us as we approached.  We all took pictures together, then cheered when the next hiker approached.  She said, “Wait, it’s not too late, if I turn back now, I’ll be closer to Mexico than Canada!”

We did what any true thru hiker does when reaching a notable waypoint on the journey- sat down and ate a few hearty snacks there, laughed together, and looked around at the forest. 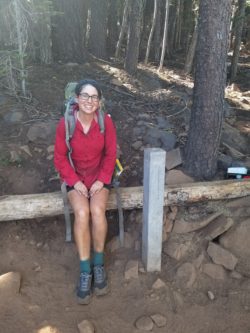 I looked through the register there, at the names of hikers who have passed by here, ahead of us.  Some I know, and feel proud of, for sticking with it, and mostly for being the people I’ve known them to be.
I’ve often heard hikers say that walking a long distance trail has restored their faith in humanity.  They refer to the trail angels that helped them out along the way, giving rides to/from town, freely giving snacks or letting hikers stay with them for a time.  I’ve felt the kind touch of trail angels, but I’ve also been so encouraged by the other hikers I’ve come to know out here.  Kind, decent people.
One day I was hiking down a snowy pass, and a friend of mine said, “I think we can glissade down this.”  He sat and slid down to the bottom, then stopped and stood there.  I wanted him to move out of the path, and said, “I don’t want to run you over”, but he said, “It’s okay, there’s a rock here, I’ll stop you when you get here.”
I once witnessed that same friend leaving extra cash on the tv stand in a hotel room.  I said, “I never knew that was a thing, to leave a tip in a hotel room”, and he said, “I’ve had friends who were housekeepers, and it’s rough sometimes.”
One of my friends always made it a point to ask hikers that he saw, “Are you hiking the PCT?”  Instead of asking them, “Are you hiking the John Muir Trail?” because the John Muir Trail is the shorter trail, and he didn’t want them to be offended by him sizing them up and assuming they were doing a shorter hike.
One fast hiking friend said, “I’ll hike behind you for a while”, and I said, “That’s not a good idea, I’ll half kill myself trying to keep up a good pace and not slowing you down”, and he said, “Don’t kill yourself trying to keep up a good pace, we’re both going the same place.”
One hiker saw me attempting to hitch hike along a road, and came over and stood beside me, and said, “I’ll just stand here and make sure no one creepy picks you up.”
One hiker has just earned her environmental engineering degree, and now she’s out here hiking the PCT!  She told me how neat it was to see the wind turbines in one section, because she might be doing work like that some day.
One hiker saw a big messy pile of trash along the side of the trail, bundled it up, carried it a short distance, then set it down with a note attached that said something like, “If everyone who passes by carries this for a ways, we can get it to the next trash can, as a team.”  Eventually a group of hikers approached and split it up, and carried it out that way.
One of my friends knew that I had lost my earbuds, so the next day he put his own set in his pocket, and then when I said I was going to listen to an audio book, he pulled them out and said, “You can borrow these.”
I could go on and on.  I know these are small examples, but they have touched me.  Many of these hikers are around my age, and it has helped to restore my hope in my own generation.  I think of each of us returning to our corner of the world, hopefully doing our part there, in our own ways.
Halfway through the trip, and touched both by the sadness of dying forests, and hope in our capacity to do some good.
< Previous Post
Next Post >