The Heaviest Pack on the Appalachian Trail? A Tribute to Uhaul

So, who is Uhaul?

Whenever I talk or write about pack weight, I can’t help but think about Uhaul, a 2011 AT hiker. He was one of those hikers you hear about along the trail before you meet them in person. Some hikers attract trail notoriety for excessive pack weight. I wonder if Uhaul may have set a record for packweight: 150 pounds! He had a Mike Tyson physique– a strong guy with a squat build and the neck and shoulders of a bull. Although he insisted he was on a thru hike, nobody who saw him under the yoke of his burden believed he would make it to Maine. He was only moving six or seven miles a day at best.

I finally met Uhaul when I caught up to him at Cold Mountain Shelter in the Nantahala National Forest in the formidable mountains of North Carolina. One of the few remaining 1930s shelters built by the Civilian Conservation Corps during the New Deal, the shelter was sturdily built, in surprisingly good shape, but smallish in capacity. So I got a good look at exactly what Uhaul was carrying. He slept in a two person four season sleeping bag, the kind of bag you might want on a honeymoon ice fishing in Michigan. He also carried a spare sleeping bag! It had been pouring down cold rain for two days and the very air itself was saturated with the impenetrably gloomy fog. He spread out his commissary. In preparing for his hike, Uhaul had made certain he would not run out of coffee, carrying a ten pound bag of Cafe Bustelo.

He offered me some coffee and I graciously accepted. The rain fell and the late winter woods filled up with a clinging chill and ever denser fog. He had a thick New York Dominican accent and he made coffee the way Domincans do, in some kind of small espresso pot. (The pot weighed almost a pound!) The coffee was black lightning and we talked in animated caffeination. I told him I grew up on Staten Island and he was surprised I had lived for a time where he grew up, the Inwood section at the extreme northern tip of Manhattan. We had both taken walks in the wooded areas of Fort Tryon Park, where the same glacial forces that formed portions of New York’s Appalachian Trail formed the heights of northern Manhattan. We talked about the view that overlooks Columbia University’s football field, where Jack Kerouac himself played halfback, and beyond, the high rising population density of the Bronx.

Teaching mostly immigrants and the children of immigrants in New York community colleges and universities as an adjunct writing instructor, I came to understand how the Hudson River is the widest river in the world, culturally speaking. There are city kids who grow up in neighborhoods like Inwood and Washington Heights that will have reached the legal drinking age without having seen any part of the United States west of Fort Lee, New Jersey. An insulated world of concrete and bricks, upper Manhattan speaks a form of Spanish that is neither understood in Spain nor the Dominican Republic, being an American urban dialect within an Afro-Carribean dialect of Spanish. I told Uhaul that the last person I thought I’d meet in the winter mountains of North Carolina would be a New York Dominican from Inwood.

So we drank more coffee and talked like New Yorkers waiting in the subway when a track fire has caused a delay. We talked about the Yankees and the Mets. We talked about Bruce Lee movies. Uhaul talked about the immanent return of Jesus and the end of the world. I was adamant that the world would be going on for some time, with or without people. It was not a contentious debate. It was a little like Arnold Schwarzenegger and Gerry Lopez’s scene in the 1982 version of Conan the Barbarian when Conan asks Subotai, his companion of adventurous circumstance, “So what gods do you worship?” Some hiker trash reading this knows Crom lives deep in his mountain, but I suppose the rest of you are going to heaven and that’s cool too. I will say I think it is especially bad form to criticize a man’s religion or his pack weight when he’s providing the coffee.

There was a sketchy guy many hikers had been avoiding, and he arrived at the shelter. He looked like a meth head, smelled like diarrhea and carried such insufficient gear he was a hypothermia case waiting to happen. Some hikers had accused him of stealing their gear. He had been in the habit of aggressively bumming food. Fueled by caffeine, I strapped on the head lamp and hiked into the gathering night to get away from him. Uhaul was methodically packing his yard sale and would follow.  It was late and the moonlight oozed through the gloomy mist of the night woods when I spotted Uhaul’s headlamp. It had taken him four hours to hike five miles. He carried his pack like dragging the True Cross through ancient Jerusalem. That night we could hear owls hunting mice in the darkness all around the shelter. In the morning little mouse heads, like wild strawberries, were scattered on the ground. As Kurt Vonnegut wrote in Slaughterhouse-Five, “So it goes.”

There is more to pack weight than practical weight. There is a psychological comfort level. Most thru hikers and long section hikers I’ve met carry something seemingly impractical. I carry a good sized notebook usually. I like to read but I will not take a knife to a paperback to cut weight. I was an English major after all. I’ve seen hikers carry stuffed animals and other totems for many hundreds of miles; even pet rocks. Pet rocks! What goes in the pack is not just gear, but peace of mind. The absurd weight of Uhaul’s pack seemed to illustrate, in cartoon like fashion, the heavy weight of the worries we carry from the city onto the trail. Along the AT in 2011 I lost items that seemed, at my outset, to be essential, most notably, an mp3 player and my glasses. I did not replace the music. I did replace the glasses, eventually.

The last I saw of Uhaul was at the Nantahala Outdoor Center (NOC). He had changed out of his hiking clothes into stylish urban wear– chunky jeans and sneakers. He looked like he was waiting for the train at the Dyckman Street station in Manhattan. It was insane and comical, and a little admirable too when you saw the herculean effort he expended to carry all of that crap. The last I heard of Uhaul was months later when I discovered from his entry in a Maine shelter journal that he had flipped flopped southbound from Maine. His entry was a prayer asking God to give him the strength to continue. It made me smile because my hike was almost complete and several hikers I knew had already completed the trail and I felt that sad feeling that always comes when great things come to an end. Whatever we choose to carry through this world, we’re all just passing through. 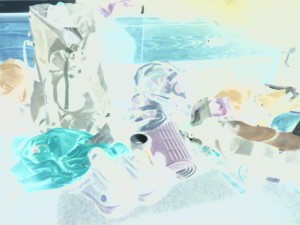