This is the second part of the segment from Gavarnie to Banasque, split due to length.  The weather mostly cooperated for this stage.

Banasque is a great halfway point rest town with everything a hiker could want from a village built before the Dark Ages, and from a modern day trail town.

The mist seemed to be mostly on the peaks and the wind was moving the clouds quickly so I thought I’d be OK to get up and over the pass I had camped beneath to escape the storm.

I was right, it was fine and the descent only had a bit of snow and steep loose scree to deal with.  At the bottom of the slope the ground leveled out and I followed a small stream to the Refuge de Cazeneuve I had wanted to reach the prior day.  It was a nice little unmanned two-story cabin and I was a little bummed I didn’t get to enjoy the coziness. 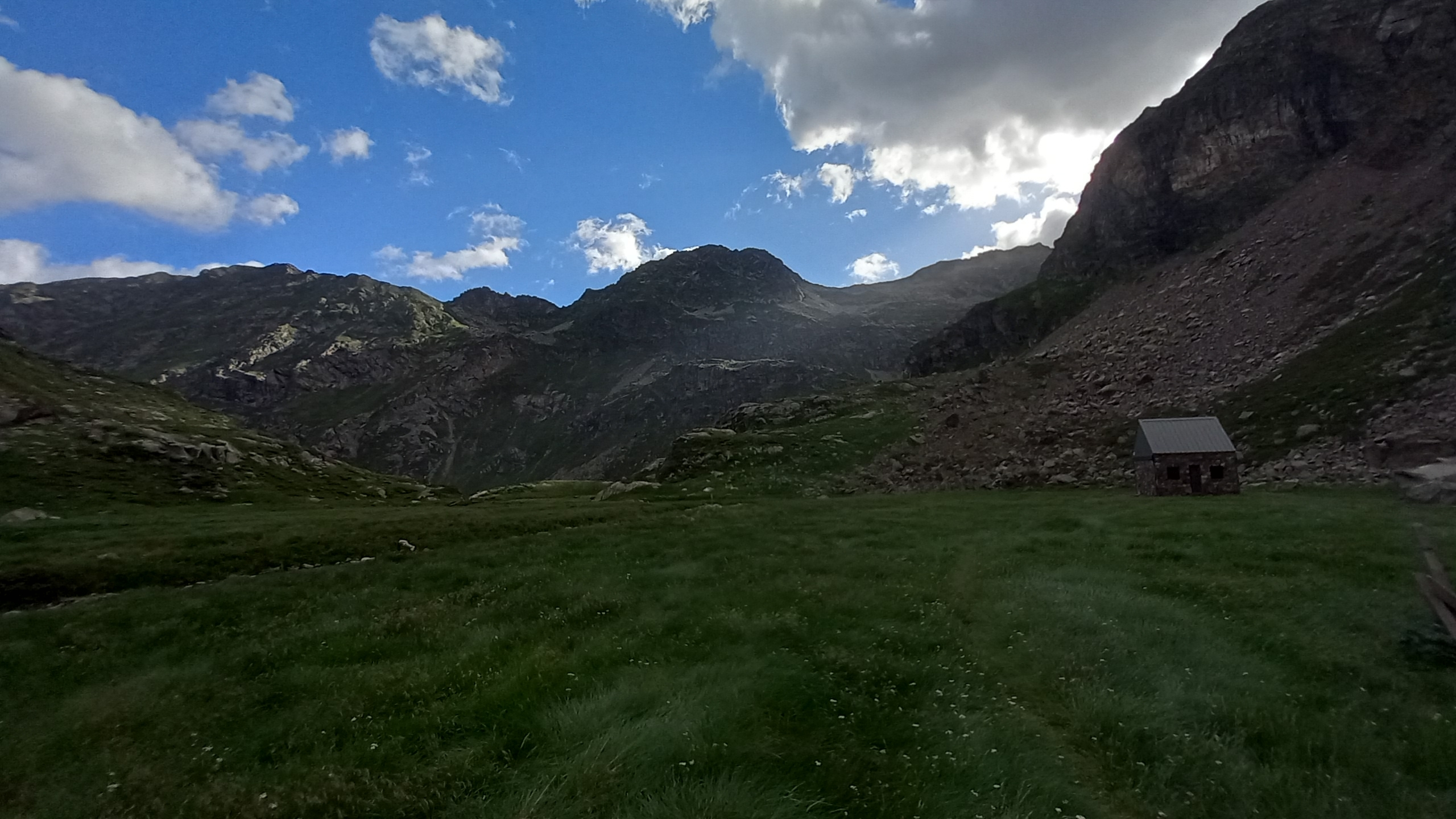 I did stay for a while to enjoy my breakfast and the sun breaking through.  Shortly after leaving the cabin the trail forked and the HRP led down further to the manned Refugio de Viados.  The variant stayed high and gently climbed along the contours of the steep SE face of the Pic de Quartau and since I didn’t need to go to the refuge or want to loose elevation to regain it I went on the variant.

The variant followed an old mine track, passing a hidden lake in a side valley, before going by the abandoned mine on the mountainside.  The mine activity of the past was evident by random rail tracks rusting away, and a wild cliffside cutout that offered a safe, wide passage around an otherwise impossible corner. 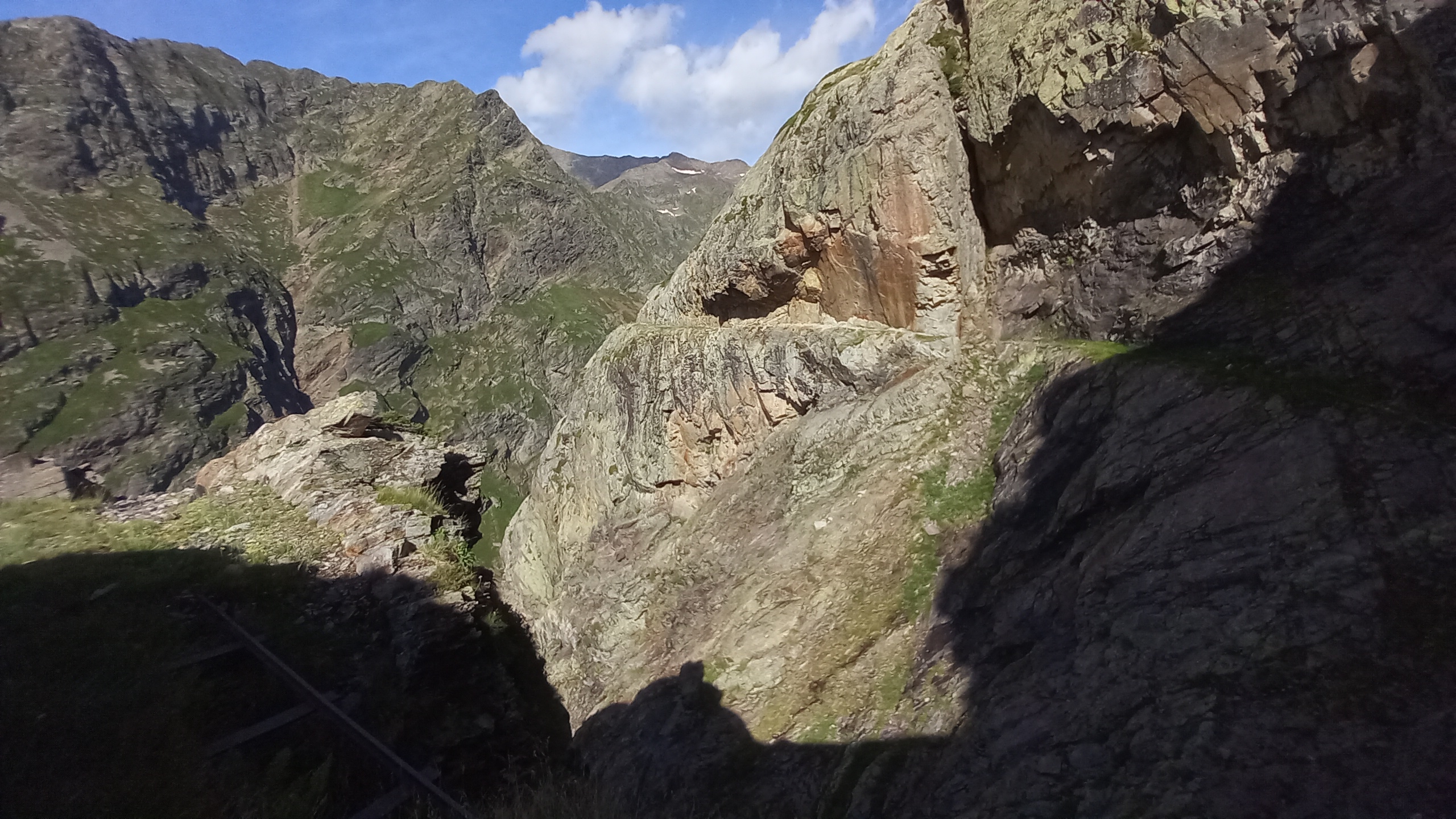 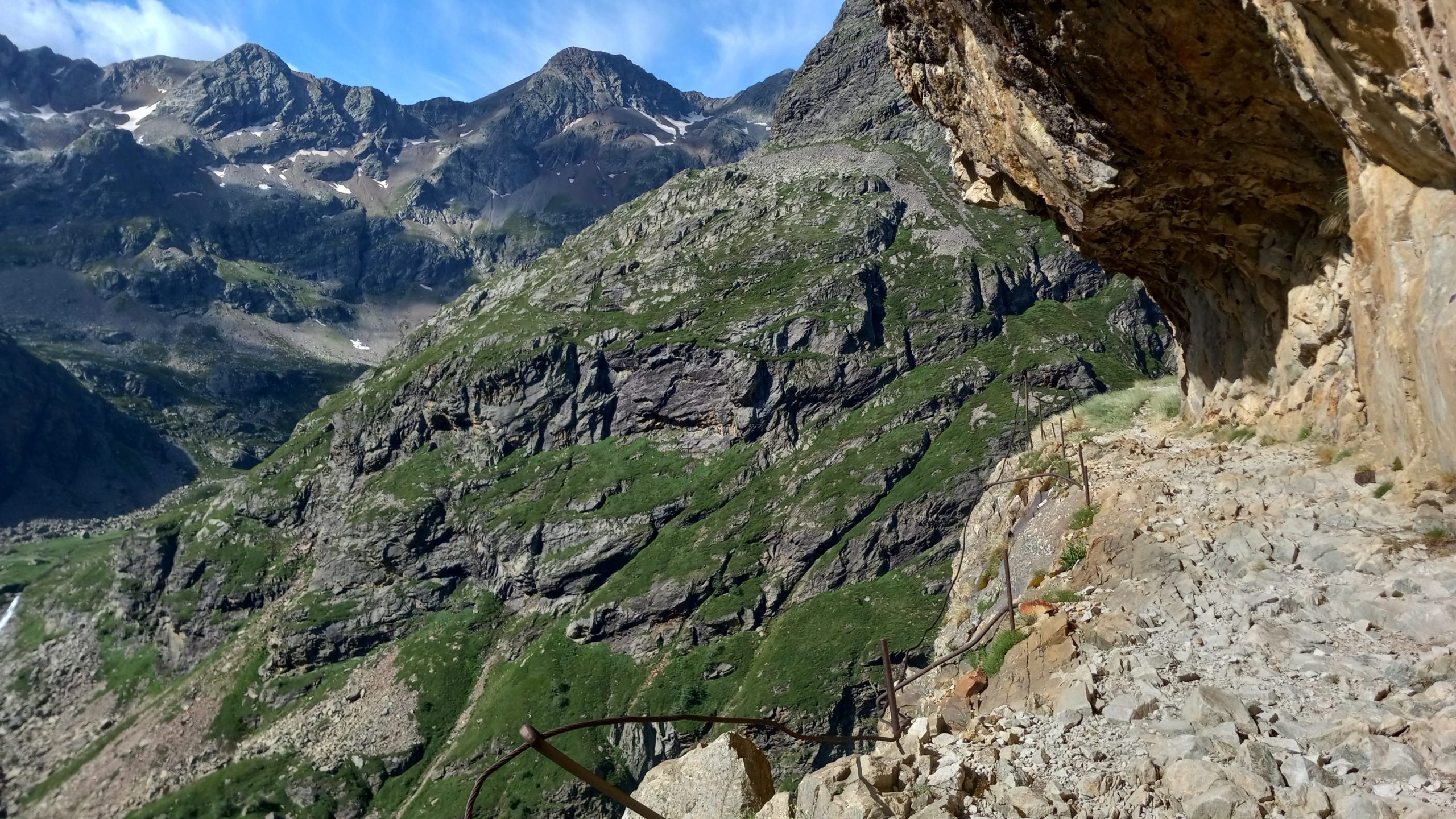 The views were outstanding from this “blue blaze” (alternate) with sharp peaks surrounding the area and the lower valley filled with a cloud that seemed to be slowly chasing me up the northwest side of Quartau. 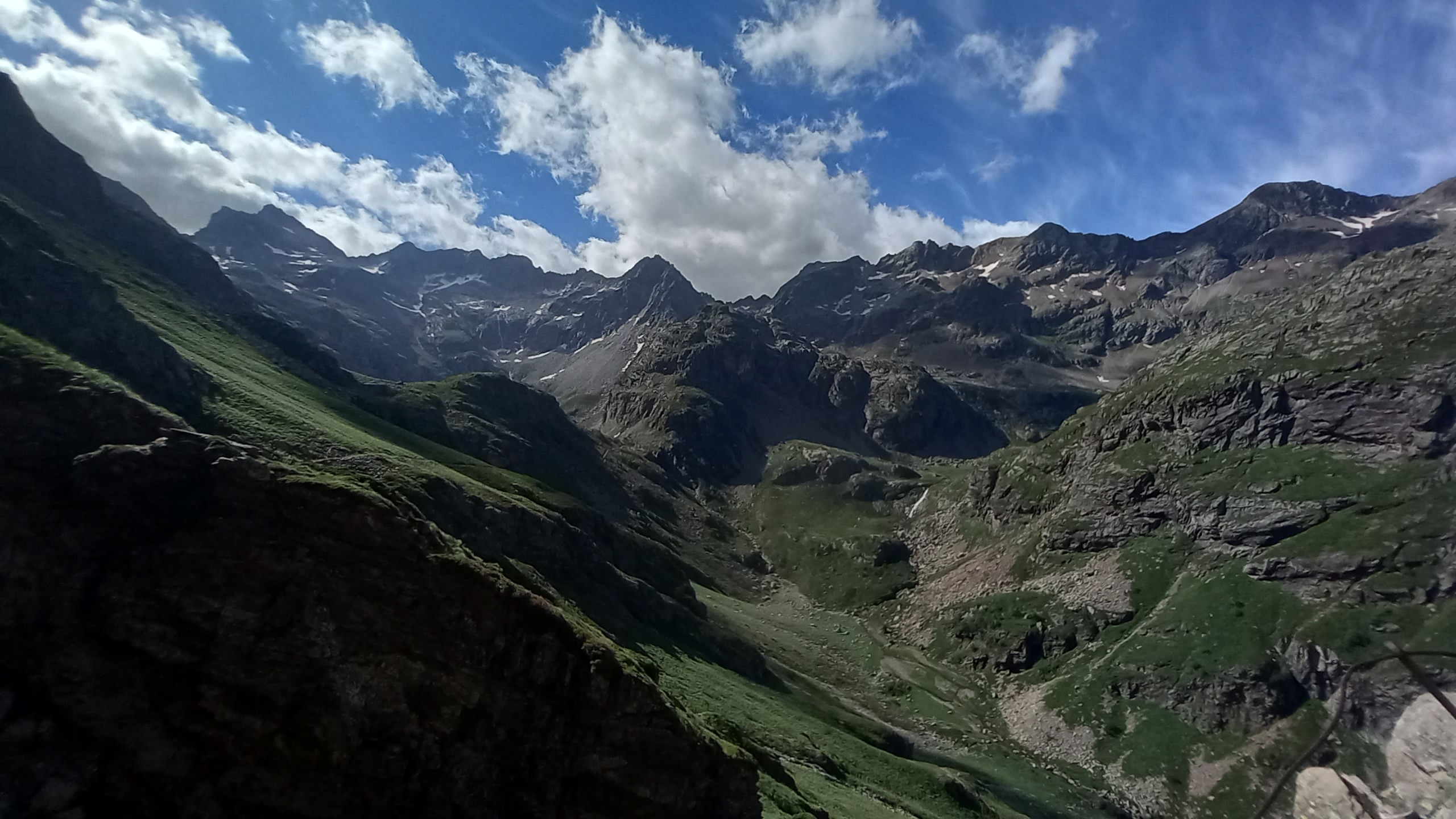 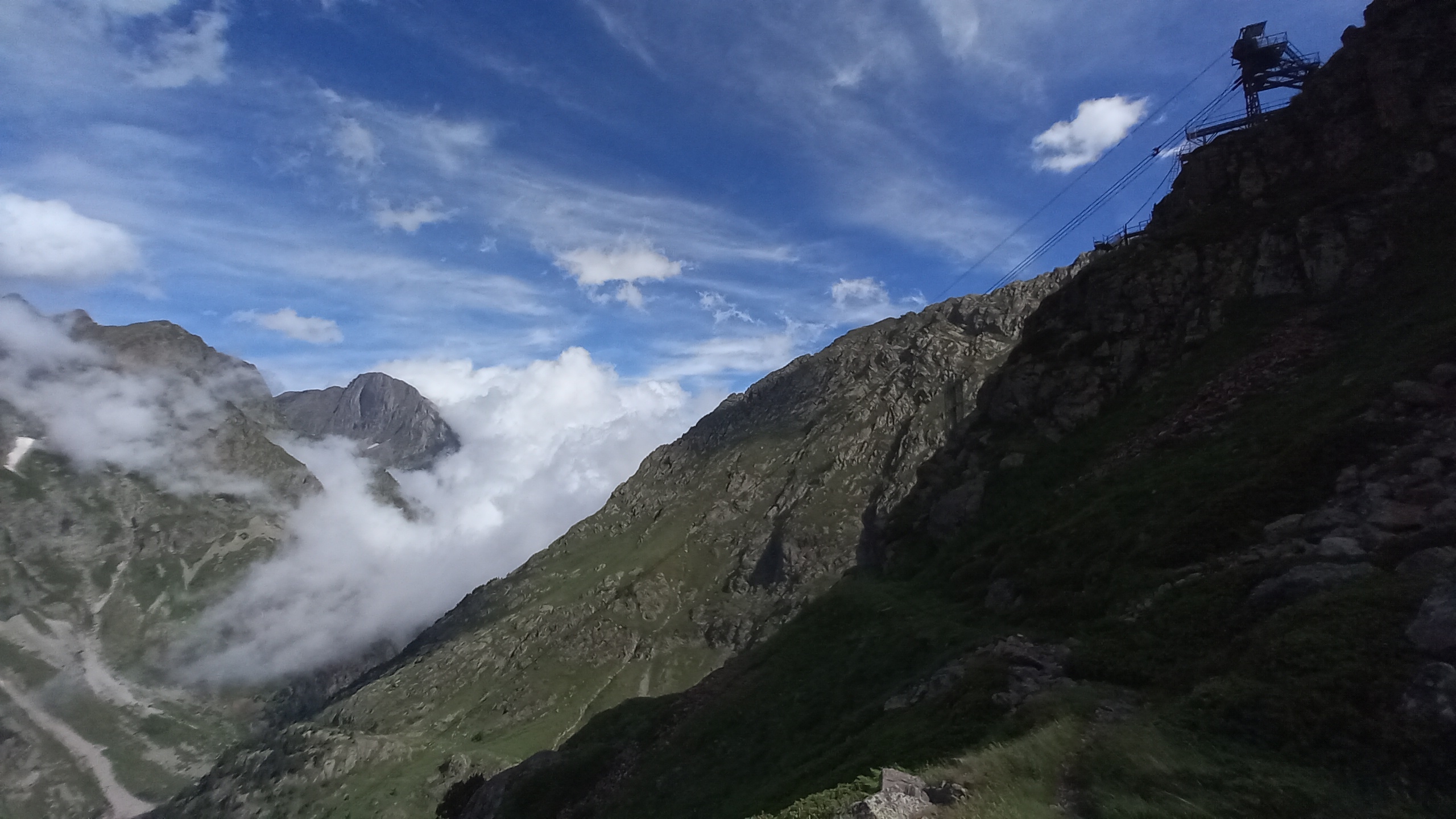 The path remet the HRP beside the Lac de Caillaouas and I found a nice place out of the wind to eat lunch and dry out my tent and slightly damp gear.

After a leisurely lunch I climbed up a little further to the Lac des Isclots.  I remember my hiking buddy Johan had told me this one was a memorable spot for him and when I arrived there I could see why.

I decided why not camp there and enjoy wasting away a long afternoon in the highcountry!?!  It was ideal, storms never manifested and I enjoyed the changing colors of the surrounding cliffs peaks and clouds. 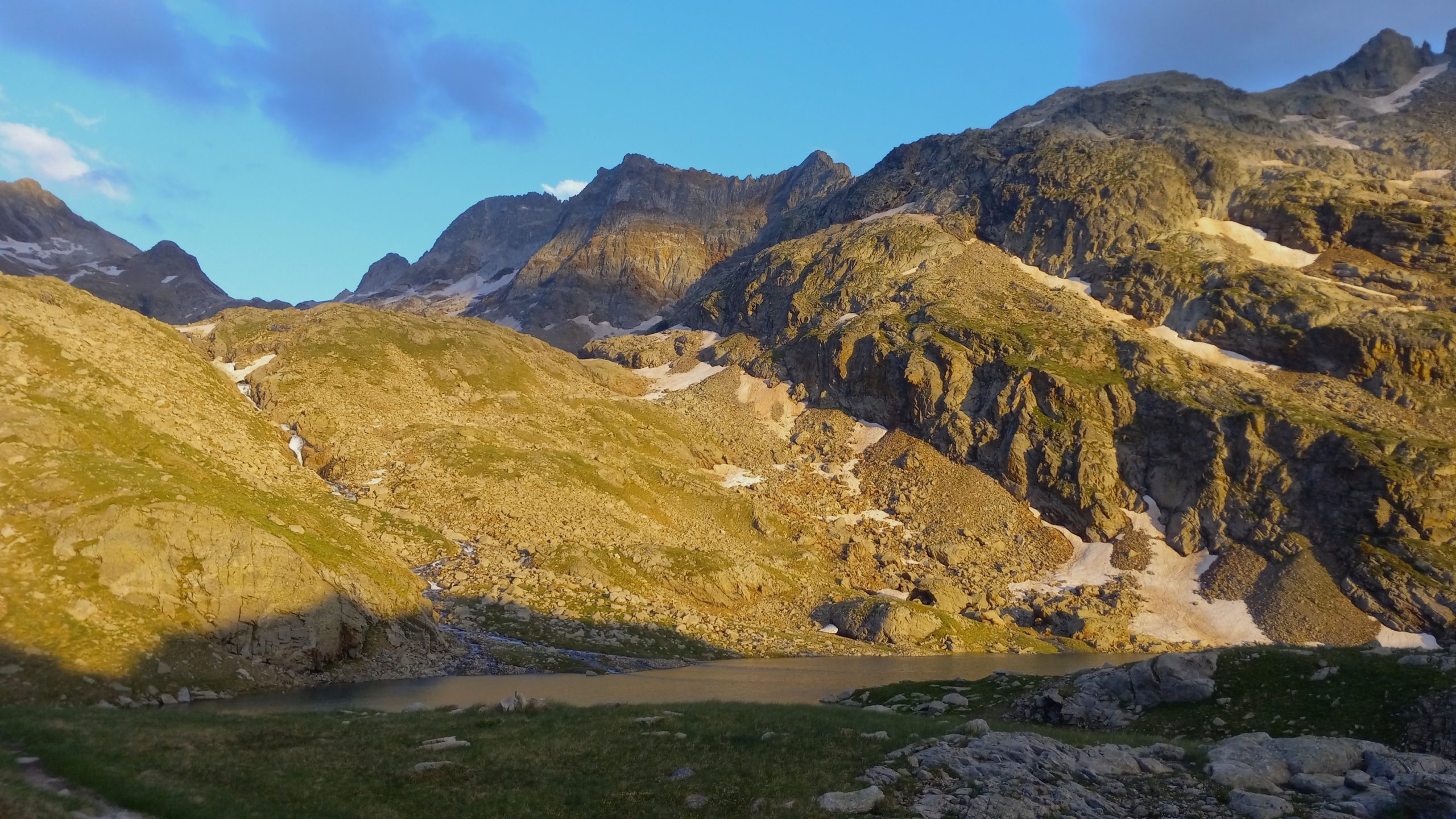 Again I awoke to misty mountaintops and passes.  I waited for it to clear, but by 9:30 it wasn’t doing much so I decided to just go for it.

The name of the game for the day would be sketchy snow orienteering.  The first of what would be four passes for the day followed the side of the the Glacier des Gourgs Blancs.  It wasn’t very steep and was entirely manageable with crampons, even probably without.  Over the pass a shallow bowl opened up with a clear view to the Col de Pluviométre (center left. 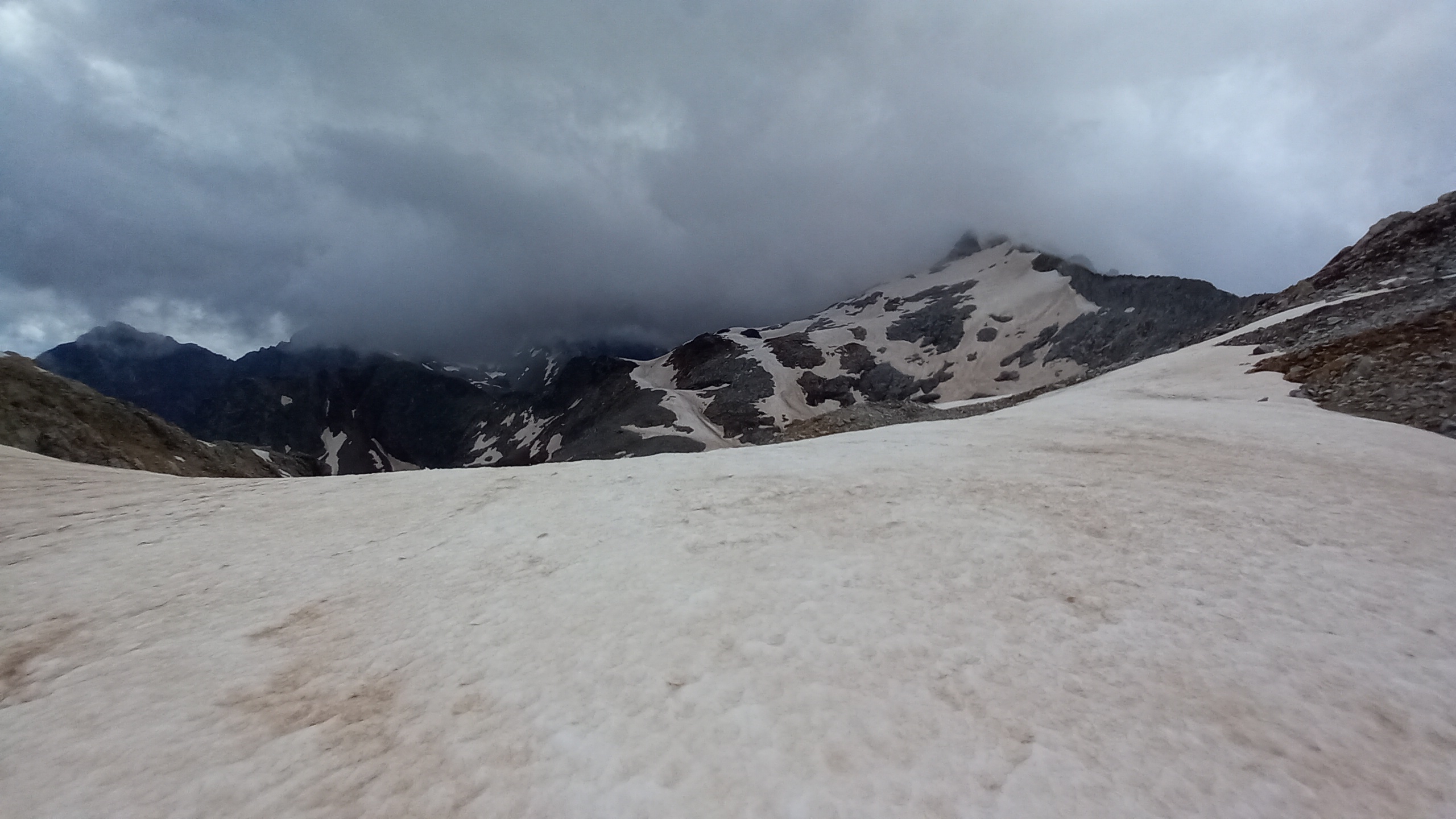 The snowfield approaching this pass was fine at first but the final pitch was treacherous steep.  I made it relatively unscathed except for one terrifying 15ft slide to some lower boulders that stopped me safely (the first of two unintentional glisades).

Over The Rainmeter Pass and around the Tusse de Montarqué (or over it, but I chose around this time) the next segment of the day showed itself- a steep descent on boulders and path to the Refuge de Portillon and a steep short climb to the highest pass on the HRP, the Portillón de Lliterola. 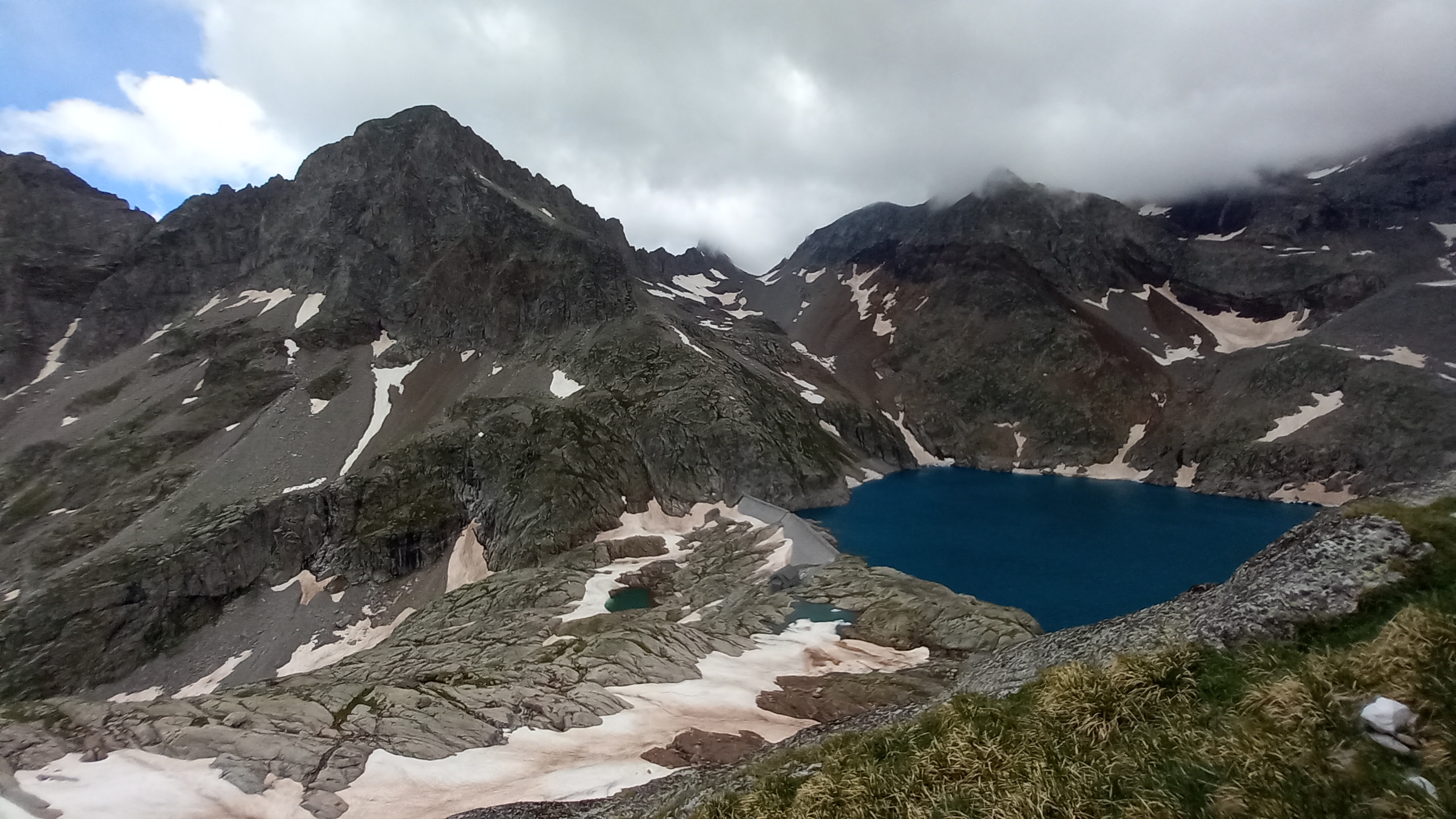 I stopped in at the refuge for some wine to compliment my lunch and to loosen my muscles a little bit.  I saw a window of sun up there and though I’d been considering staying at the refuge that clear sky was a sign to get up and over.

The climb was fine, a faint path could be found where there was no snow and cairns marked the safest way.  Cresting on the Frontier Border another alpine bowl covered in boulders and snow patches led to the Portal de Remuñe in the distance.  On one of snowfieds I had another slip out, but luckily without dire consequences. 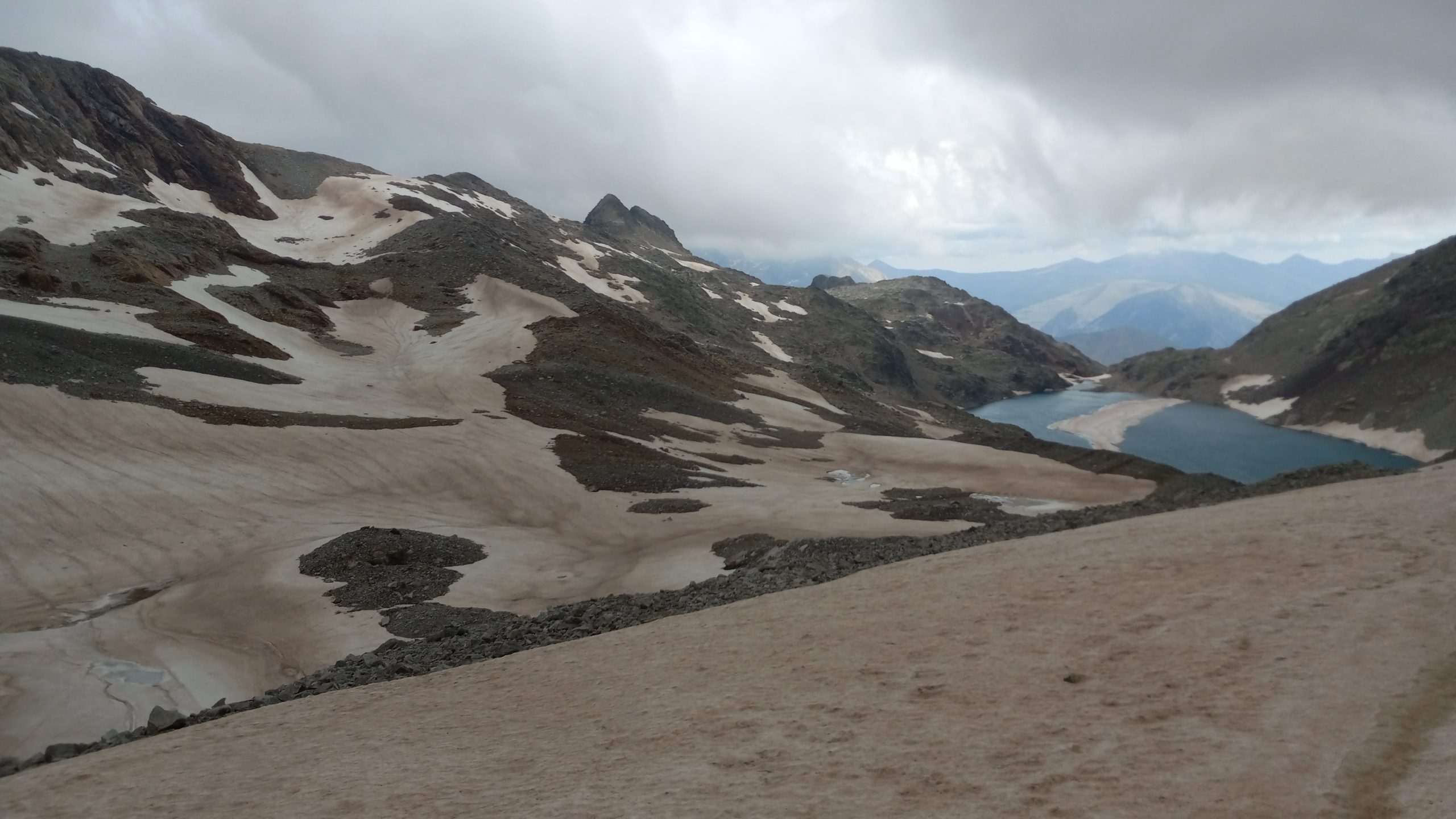 The constant on again off again with the crampons was getting exhausting but I reminded myself to be safe, cautious, and patient.

On the vast Portal de Remuñe the wayfinding became particularly tricky among the large boulders and small cliffs.  The views of Remuñe and Maupas peaks on either side and the deep valley between that I would descend into were impressive. 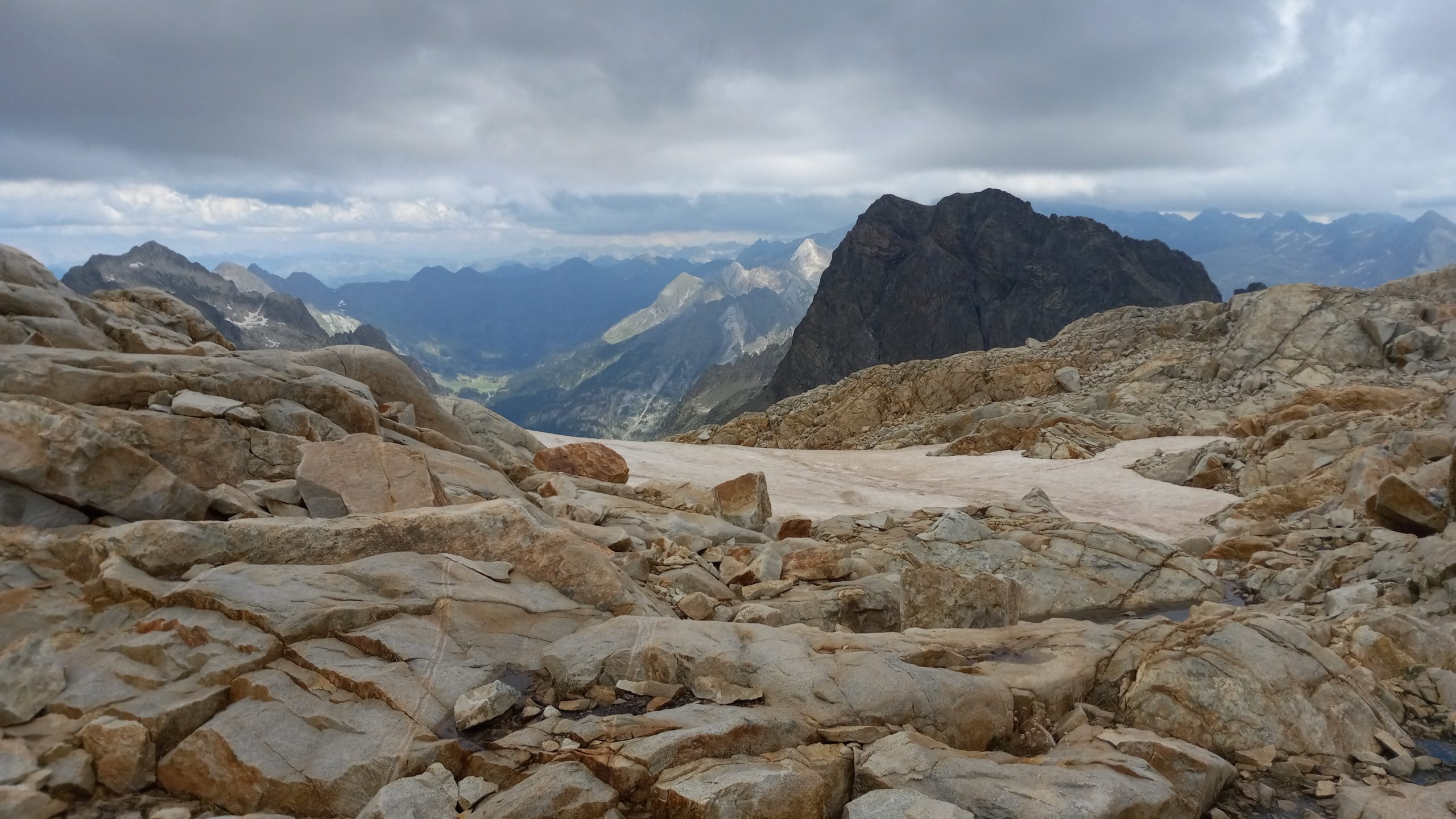 After getting down from the steeps the path became much more clear and gently followed a stream down down down.  There would be one more terrifying moment about halfway through the canyon.

Another adrenaline rush kept me humble and reminded me to never expect safe and clear travel on this trail.  The stream turned into a raging waterfall and disappeared, along with the trail, beneath a large snow patch.  There was a sketchy gap between the snow and the cliffside with tiny foot and hand holds.  The consequence of slipping here would be disappearing into the water and possibly getting stuck beneath the snow.

I kept along until the trail leveled out in a little forest and I was able to find a beautiful flat meadow above the path and out of sight. 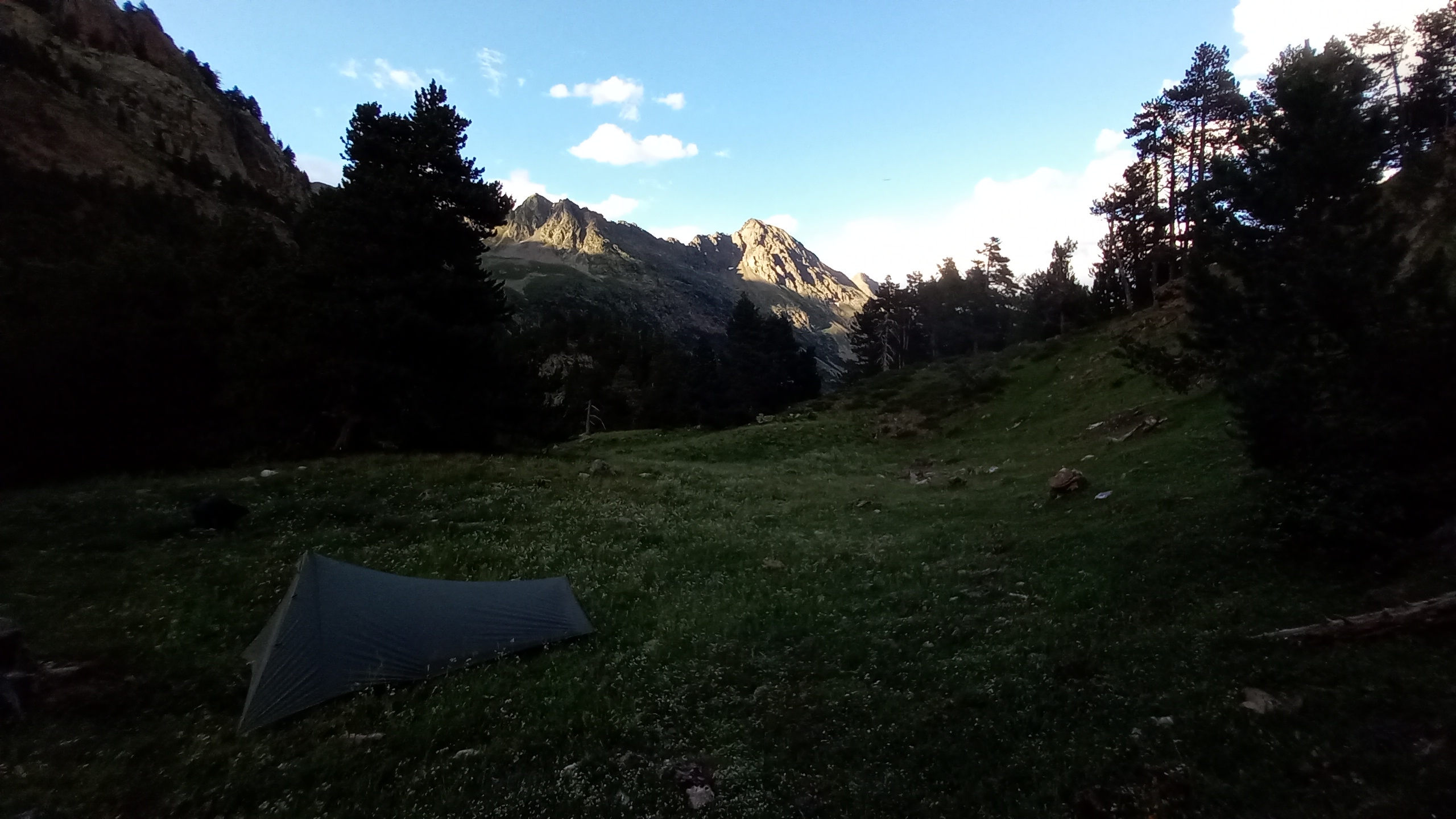 I was only about a mile from the Hospital de Benasque (not a hospital, definitely a fancy hotel) but I figured it would be expensive.  I was planning to drop down the road to the town of Banasque for a resupply and was unsure if there was a bus or hitching opportunities, or would I  need to walk.  So the meadow was home for the evening.

I woke to more rain.  I had hung my food away from my tent after seeing plentiful signs of wild boar and also knowing there are bears in The Pyrenees and this idyllic forest would be prime habitat.  I was a little worried the food bag would be soaked, but it turns out the tree I hung it in was perfect and the bag was totally dry! 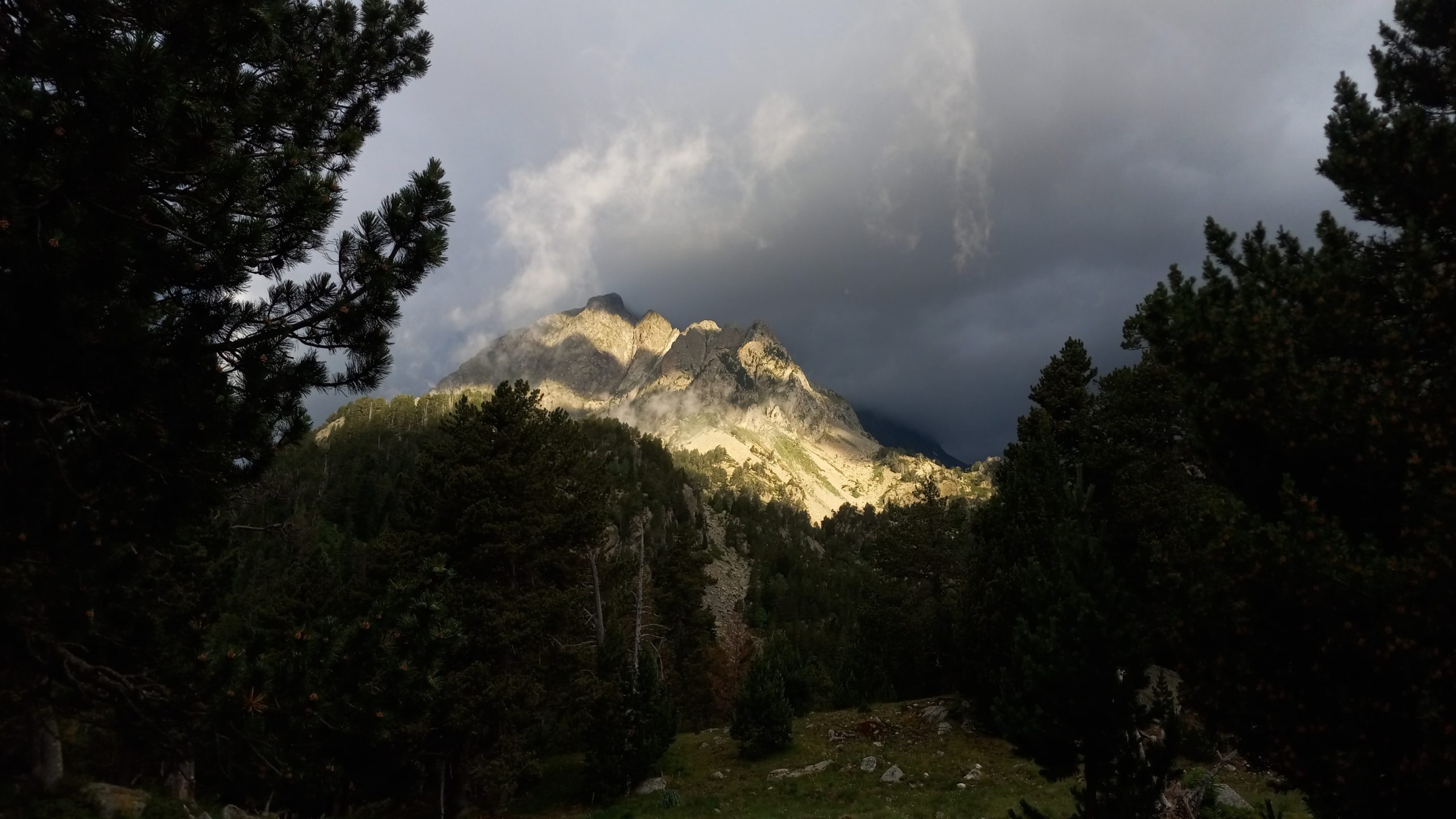 I enjoyed some sun breaking through with breakfast and headed down to the Hospital.  I asked at the desk if there was a bus (the guide said it started operations in July) and they informed it had started carrying people the day before, just my luck! So I had cup of coffee while waiting, then caught a chill ride down the valley to a surprisingly perfect little town.

It was a little difficult finding a place to stay because apparently there was a high school basketball tournament in the area and most places were full up.  I found one, though it was a little above my price range.  I figured ‘I’m at the halfway point now so it’s OK to treat myself a bit.’  I even bought new shoes!  The worn tread had been concerning more than a few times with the rain and boulder travel the previous days.

I got my resupply done, several showers, laundry, a couple hot meals, and a fair bit of wandering around the village and lazing in bed posting pictures to social media and catching up on the sad news (SCOTUS overturning Roe v. Wade and the continuing War in Ukraine).

It can be easy to forget about the dark side of society even in Dark Ages places like this.  I’m grateful to be here but still always concerned about the way humans are messing things up. 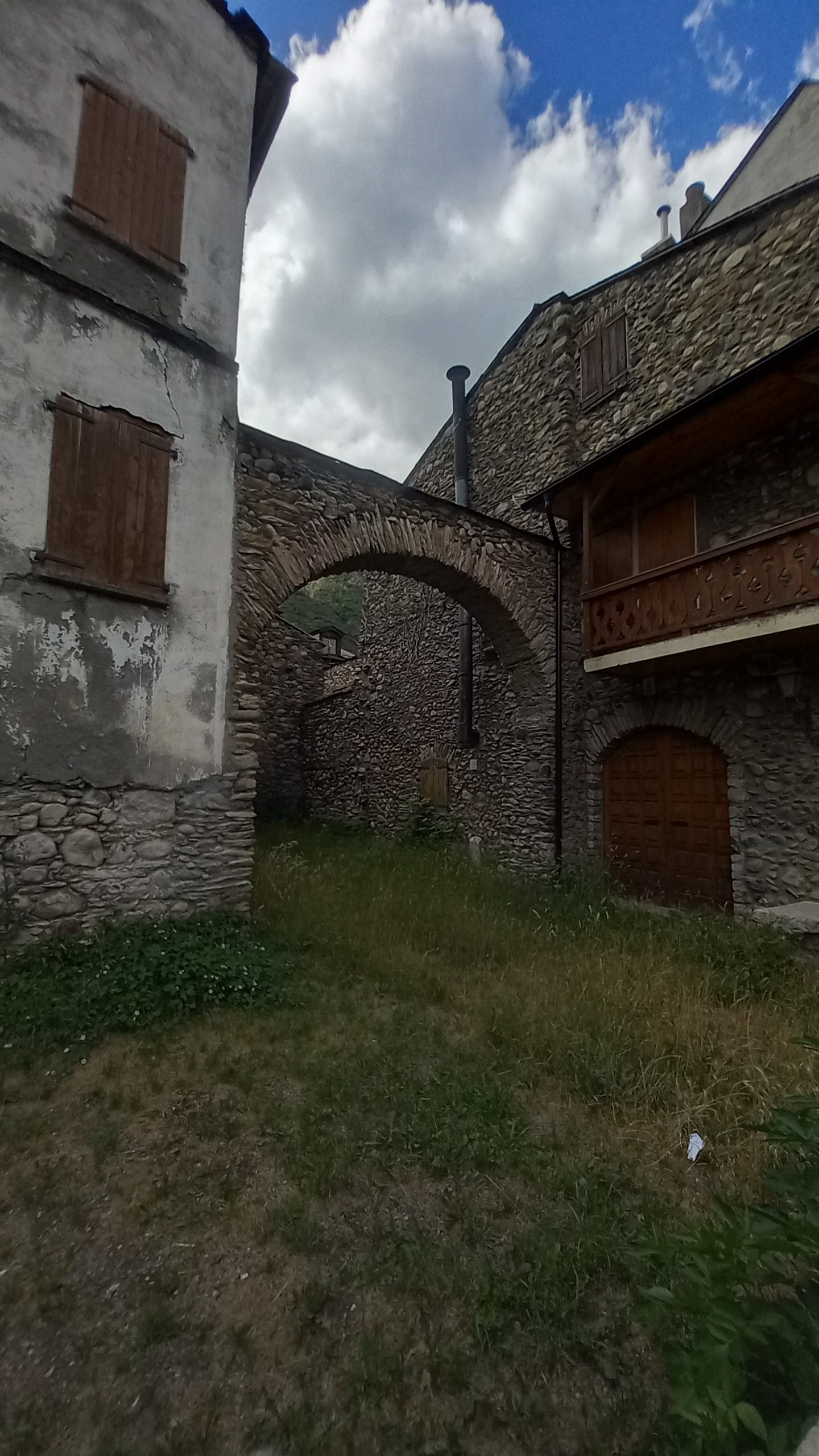 Another rest day because why not.  I went down to the breakfast buffet and it was worth every cent I payed for the hotel room.  The spread was epic. 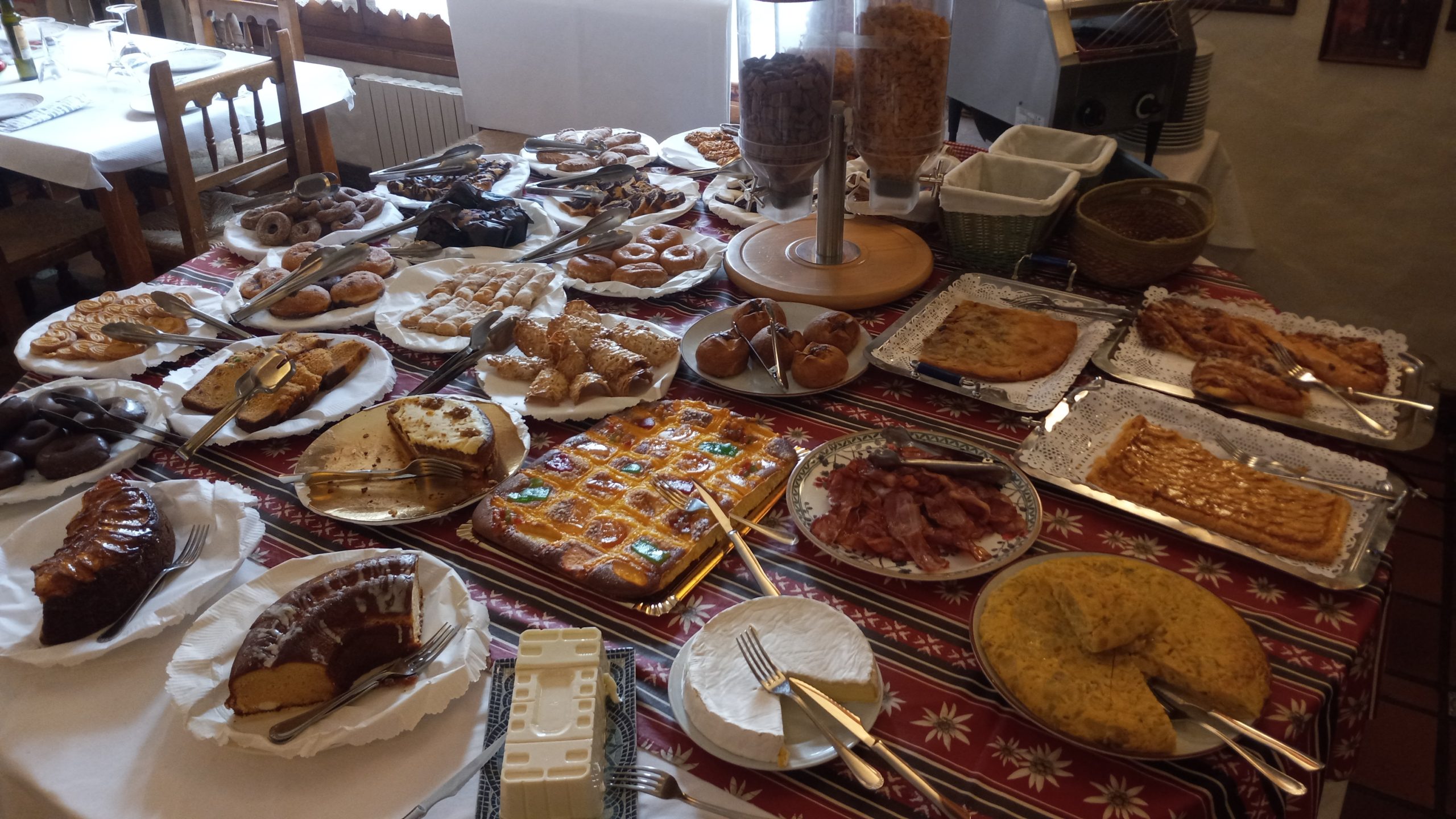 After packing up I headed along the stream up the road to a campsite on the GR11.  I decided to take the variant from the campsite by hiking the GR11 to rejoin the HRP in two days, maybe one if conditions allow it.  Forecast is rain for and coupe days, then maybe some nice weather again?