I decided to hike from Banasque on the GR11 variant right out of town due to concerns about bad weather.

When the HRP overlaps with the GRs it’s like a breath of fresh air.  The path is very well marked with the red and white paint slashes.  The path is wide and well worn.  Often (but not always) the GRs take a little bit easier route through forest rather than high alpine environments.

It was a nice option to have at the time and a refreshing return to the trail.  Banasque was good to me but a hiker’s gotta hike!

Day 24 – Banasque to Hospital Viella via the GR11

I left the campsite in the rain, though it was more like a drizzle.  For the first couple of hours of hiking the spatter would come in waves, the kind that would hit just as the rain jacket was getting too warm and I’d take it off… you know how it goes.  Eventually it just quit, though the skies would threaten more showers all day.

The trail followed a dirt track up to elevation, a gradual and easy going ascent that was honestly a nice start after a couple lazy days off.  Halfway up I passed a uniquely designed rustic cabin.   At the end of the road was a slightly more elaborate but still rustic cabin at the base of the steep climb up to Collada de Vallibierna. 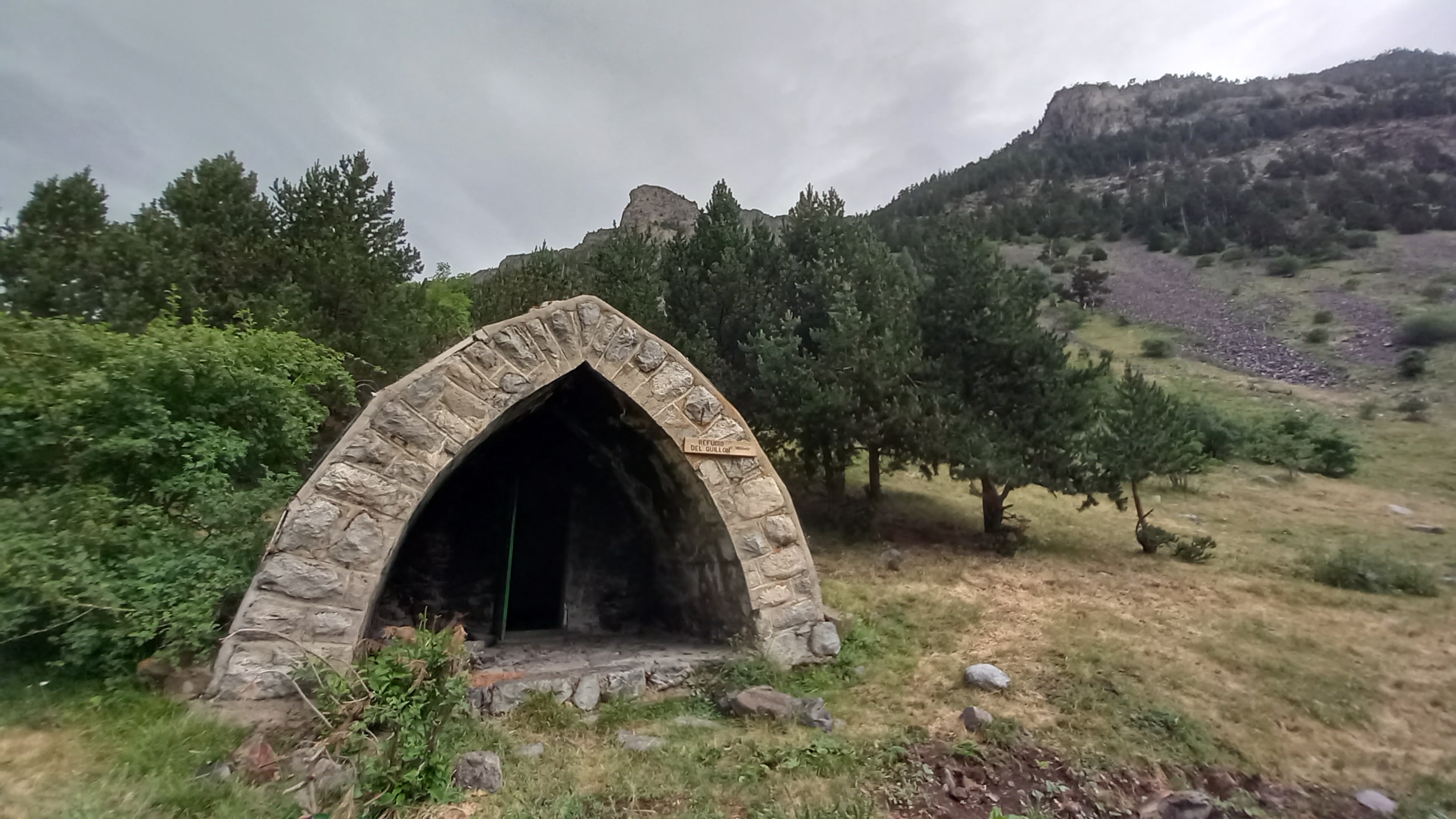 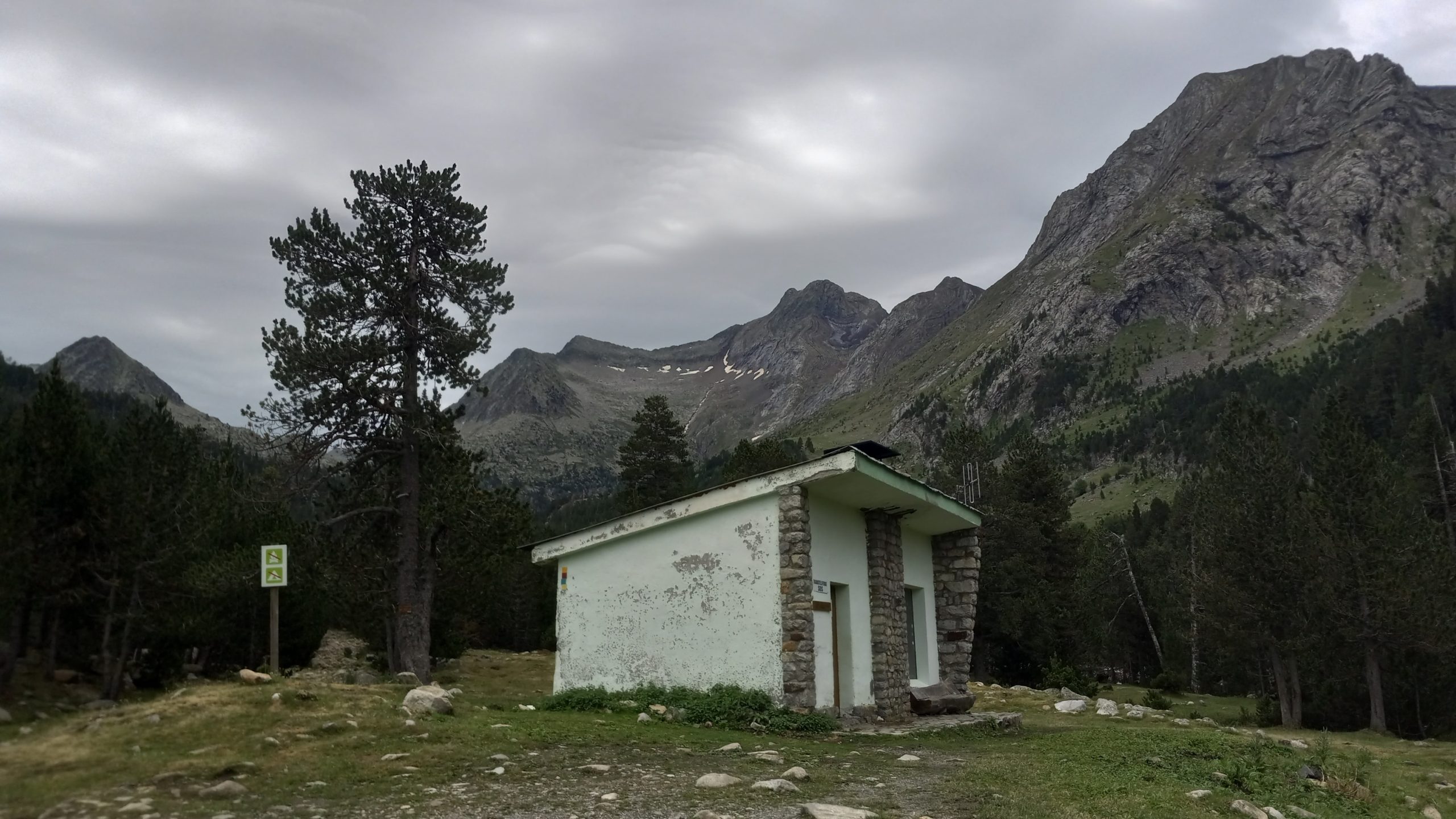 At the second cabin I stopped for a lunch (I’d left rather late trying to wait out the rain) and met a couple other hikers who had been talking with a park ranger when I arrived.  They said the trail was good up to the pass, a little worse after, but most excitingly… no snow!

The clouds were swirling and making wild and interesting flow patterns in the sky, but it looked like they were lifting up rather than falling down.  Every once in a while a tiny patch of sun would break through.  We all decided to go for it. 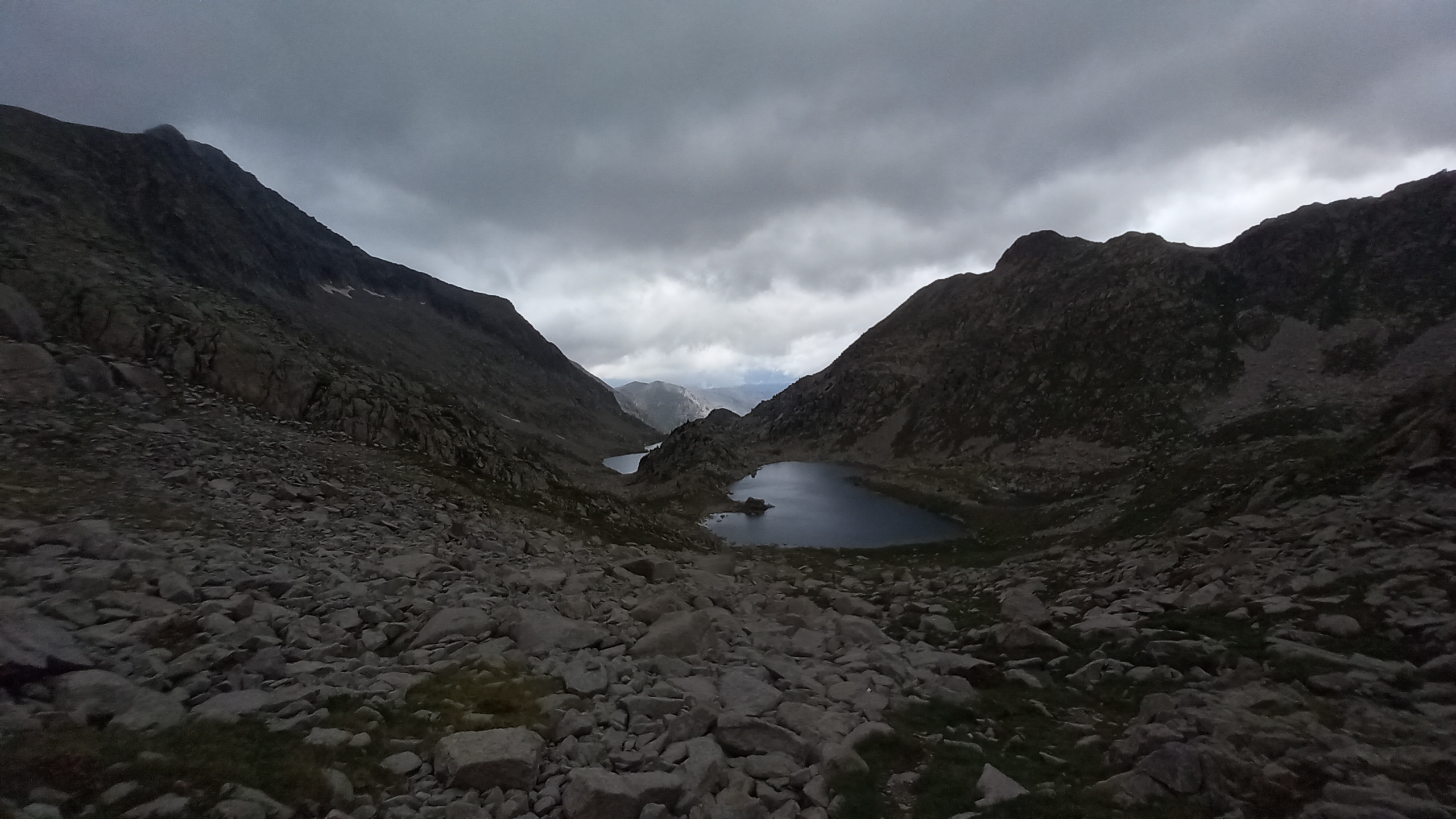 The trail passed by the Vallibierna Lakes, the above picture is looking back at them.  This picture is from the far end of the lake looking at the pass: 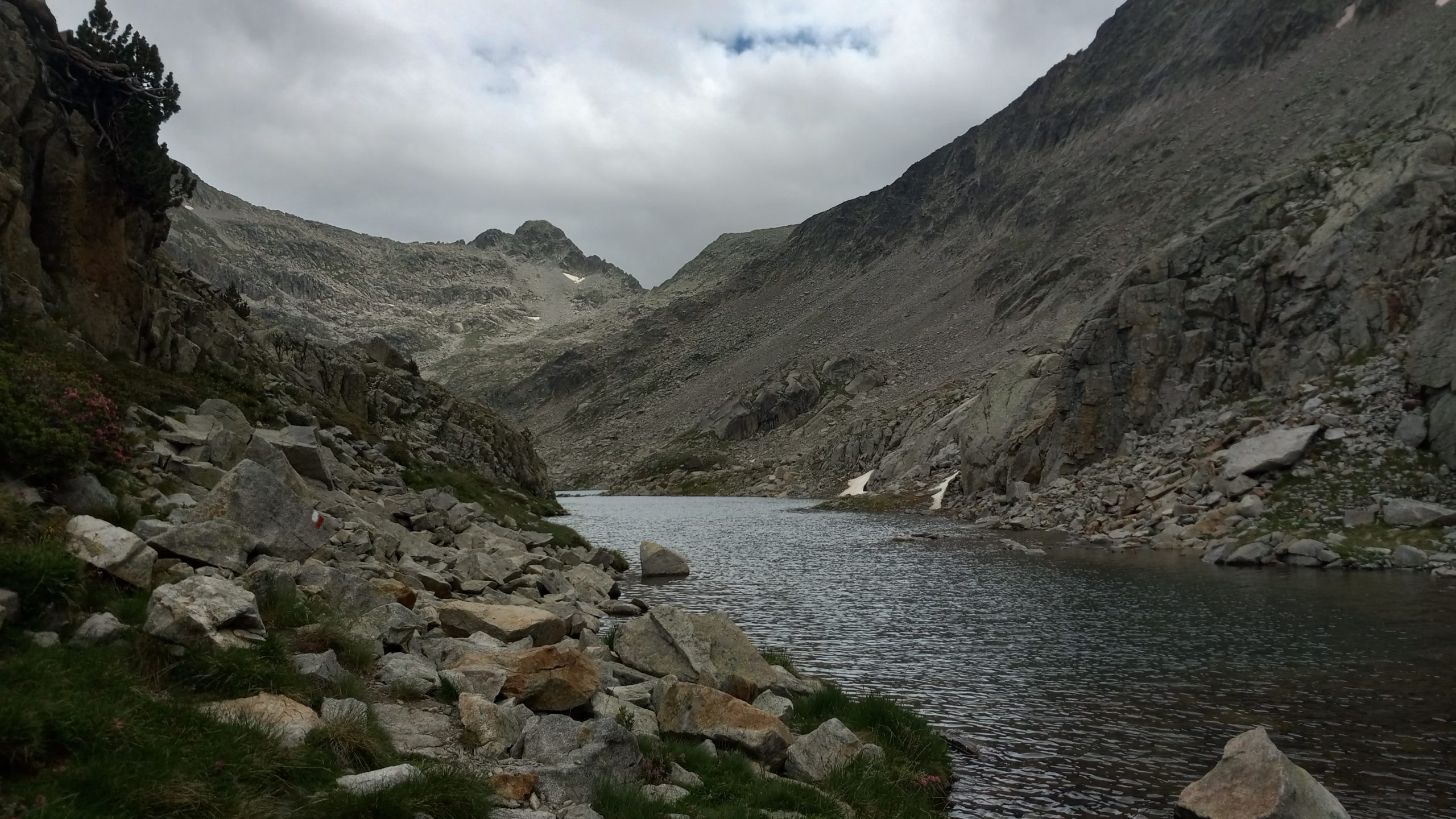 Notice the sun up there?  Contrasted by the darkness of the clouds of the previous picture?  Yeah, super confusing conditions that were very difficult to judge.

The pass was summited and the trail dropped quickly down to the Refuge Cap de Llauset slightly adjacent to the lake of the same name.  This is next to the refuge looking back at the pass: 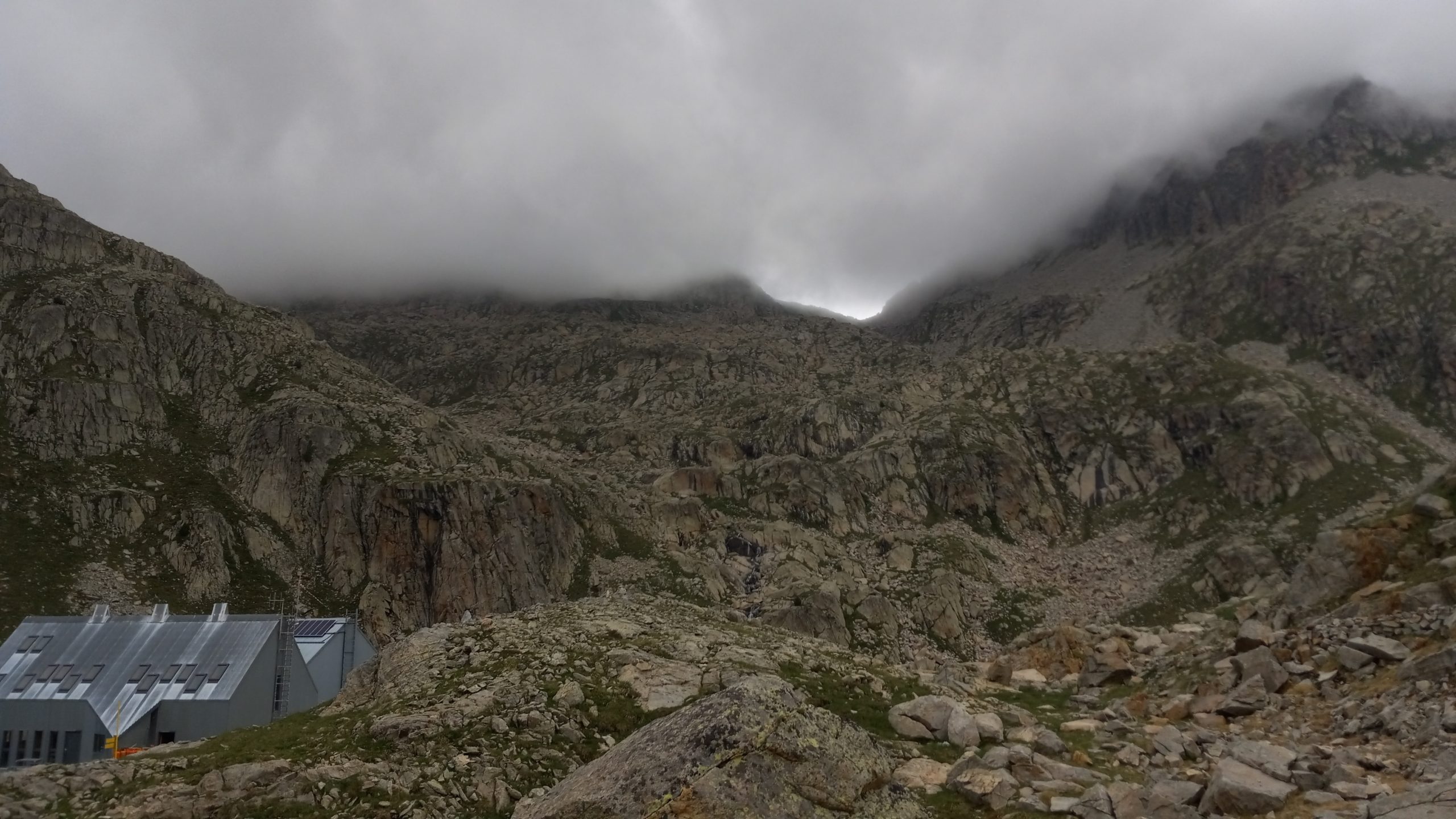 Needing some warm fluid I stopped in for a cup of coffee.  I met an American thruhiking the opposite direction and had a good chat about trails and travel in Europe, then we went our separate ways.

The next pass out of the bowl was a short one, and on the other side there was considerably more sun and blue skies breaking through.  The trail leveled into an expansive boulder covered plateau with yet another cabin placed somewhere near the middle and in close proximity to a lake. 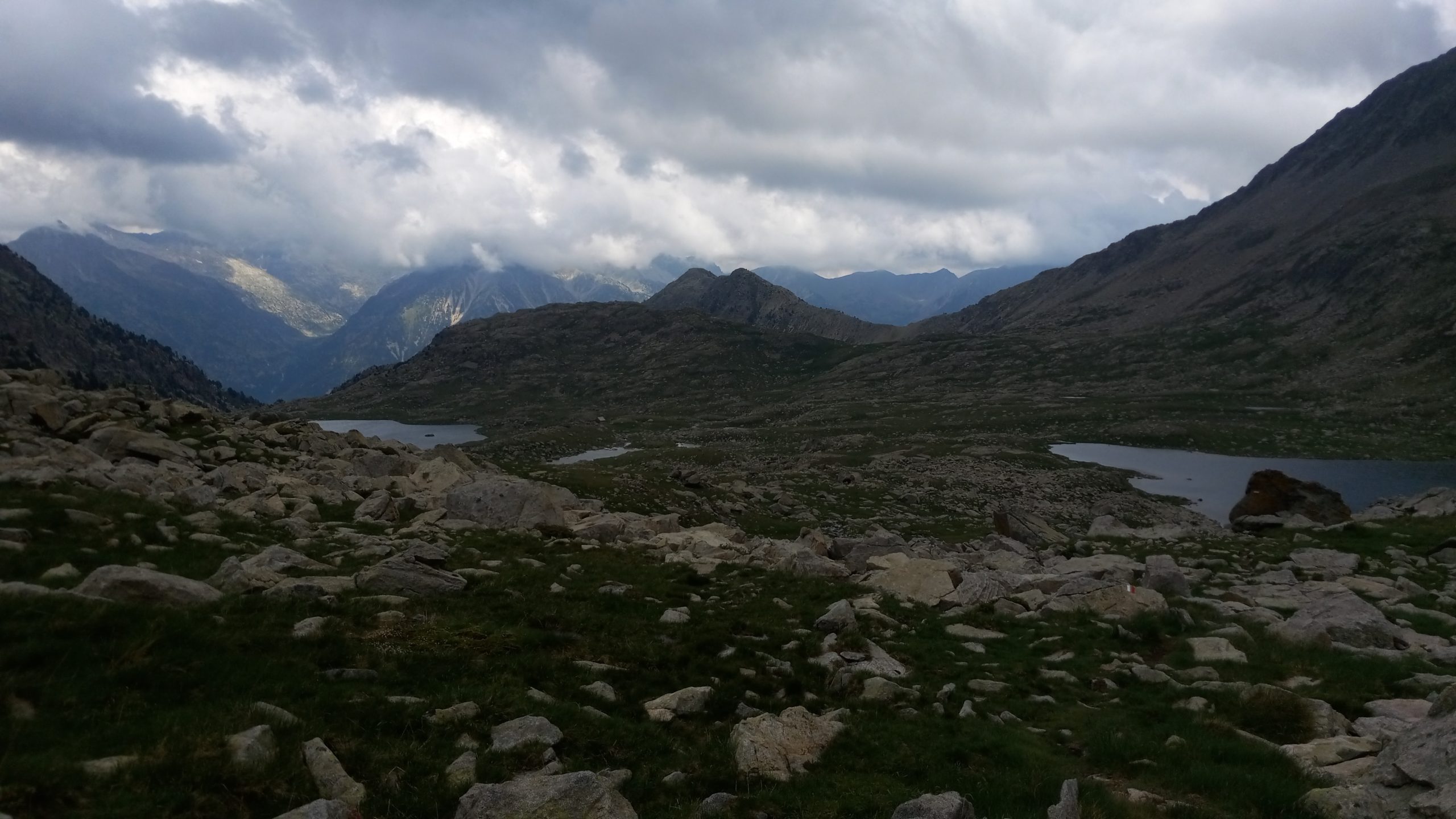 A couple and an older gentleman had already set up, but I took the opportunity to dry my tent and converse with them for a bit while snacking. 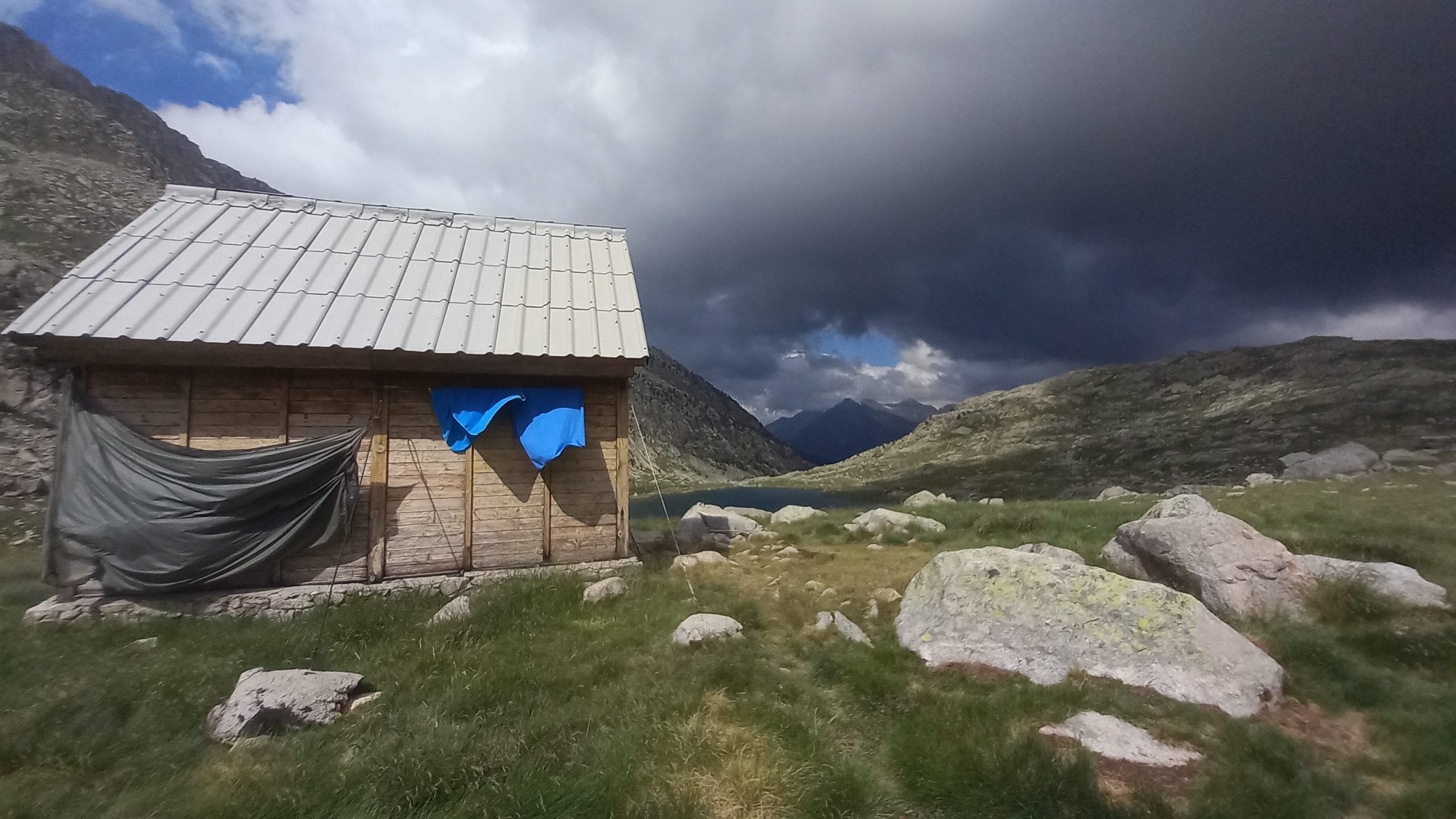 I surprised my company by announcing that I was going to hike further.  The weather seemed to be cooperating so I figured I would make a go at getting all the way to the valley floor.

I’m very glad that I did, the trail led into a forest, the sun was breaking through the leaves like fluid gold, the path was wide and well marked, and it was glorious.  Eventually I reached the Refuge de Conangles but I wasn’t planning on staying, just stopping in briefly to enjoy a glass of fine Spanish wine after a long day.  As I sipped I saw a thunderhead moving my way, so I paid and walked a half a mile up into the woods and right after I set up my tent it started pouring.

Yup, that happened.  Rained out.  I actually did hike about 200 yards though.  Around noon the rain let up and I though I’d be good to at least get a little ways up the next segment. 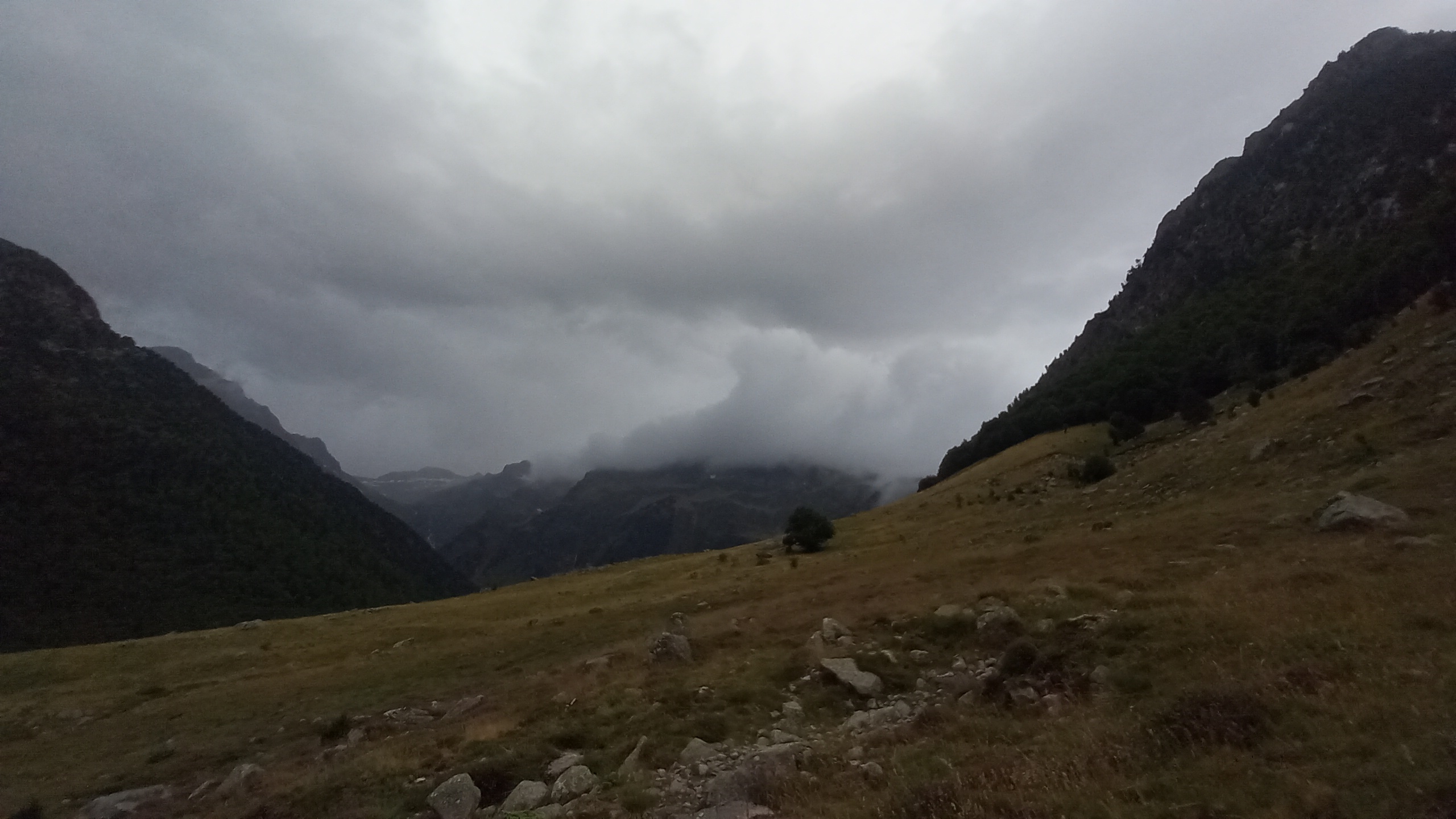 I packed up my tent and began hiking but then I saw a rundown cabin by a waterfall and I had to check it out.  Then I figured I’d try to dry my tent out a bit.  Then it started dumping rain again. 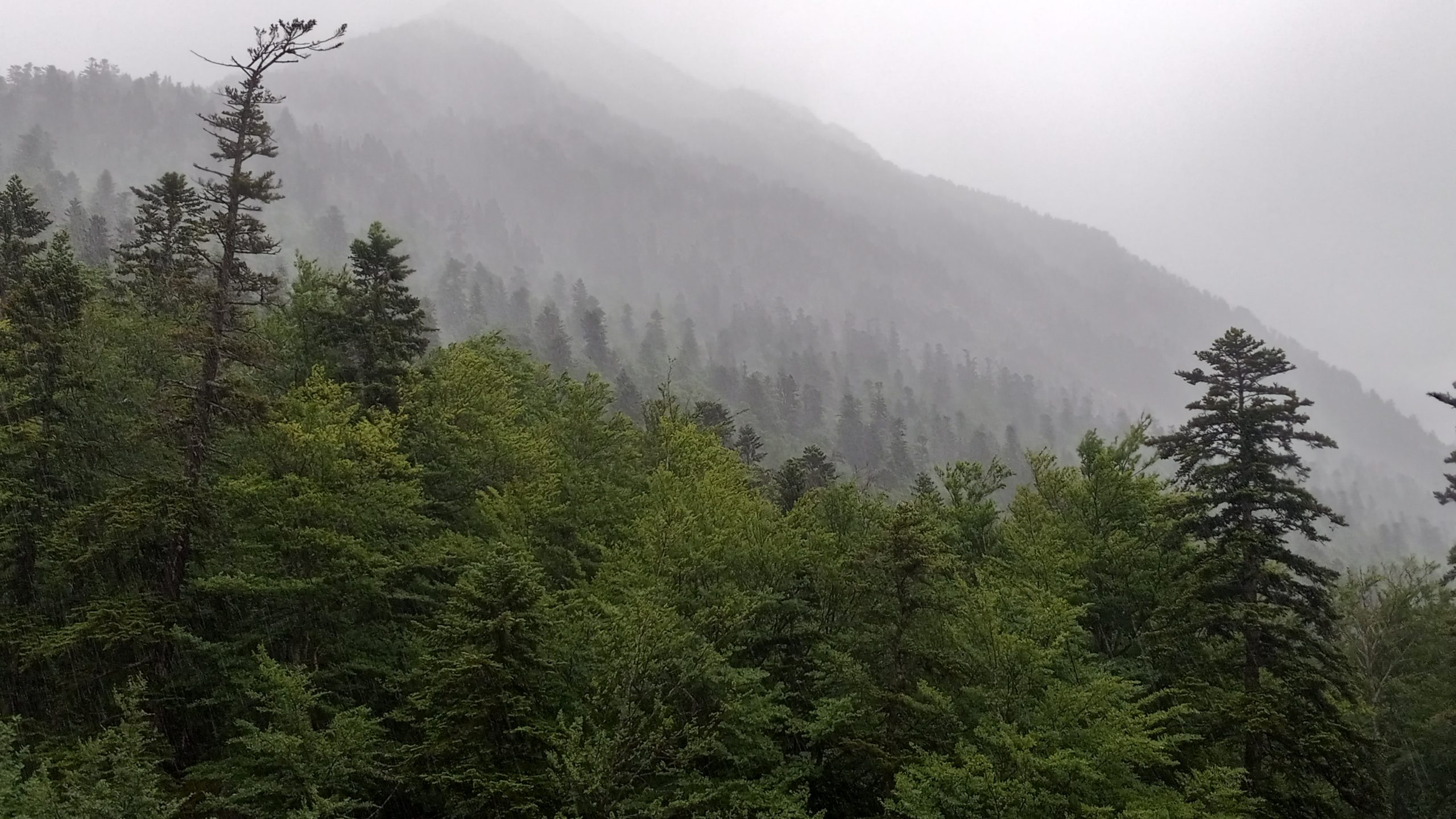 So I stayed and though the cabin was leaky I managed to not get wet and most of my damp gear was able to dry out in the draft (no windows or doors).

I listened to a few podcasts, ate a whole lot, and basically chilled (literally). Around sunset time I noticed the peaks out the window lit up bronze, shining even more brightly against the dark storm clouds.  The sunset turned into one of the best I’ve seen on trail thus far! 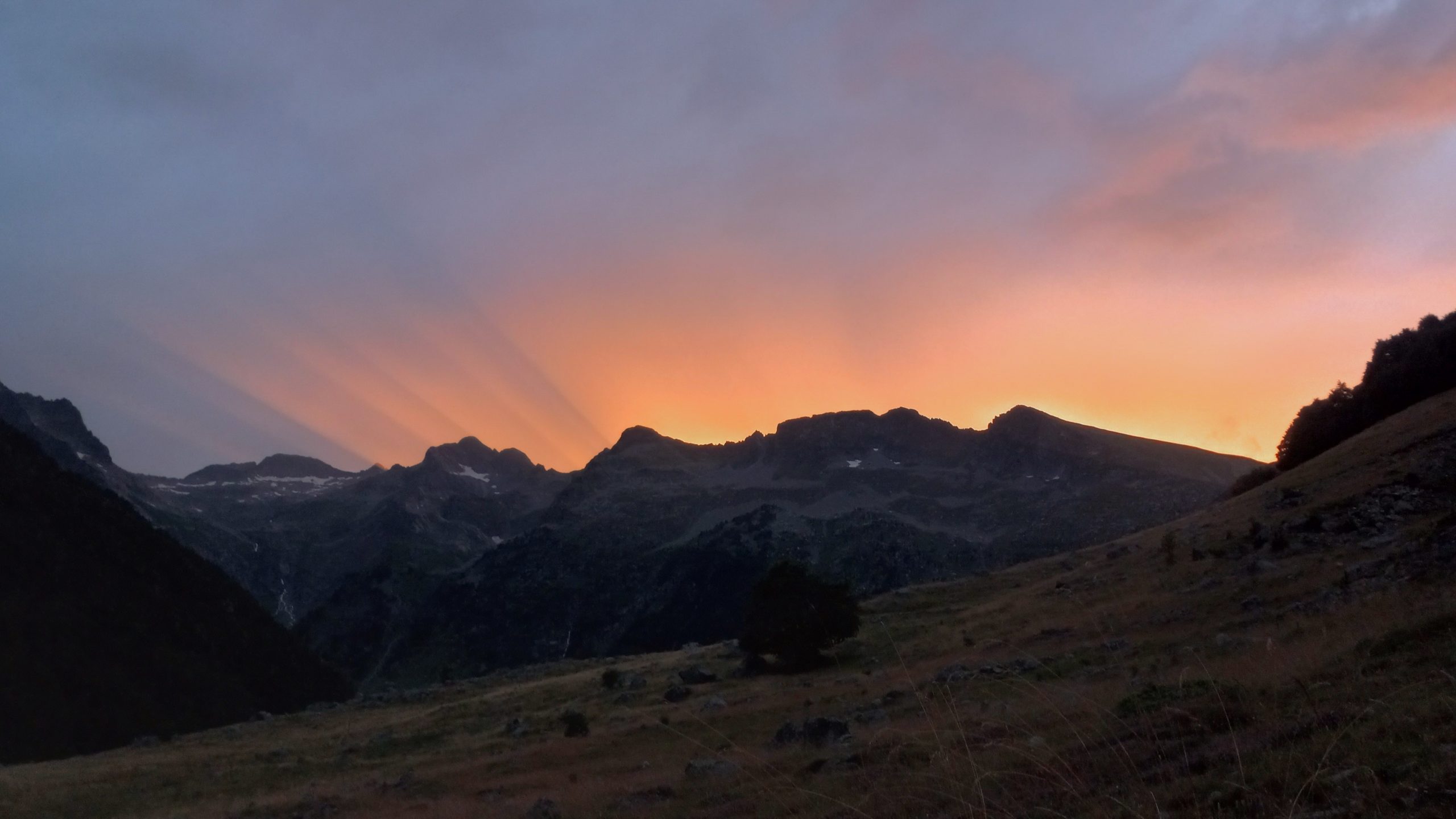 I woke to clear skies!  With gusto I set off and rejoined the HRP.  The day would be another spectacular one in The Pyrenees, with azure skies and many aquamarine, turqoise, cerulean, and lapis colored alpine lakes.  After the first pass was Lac de Rius: 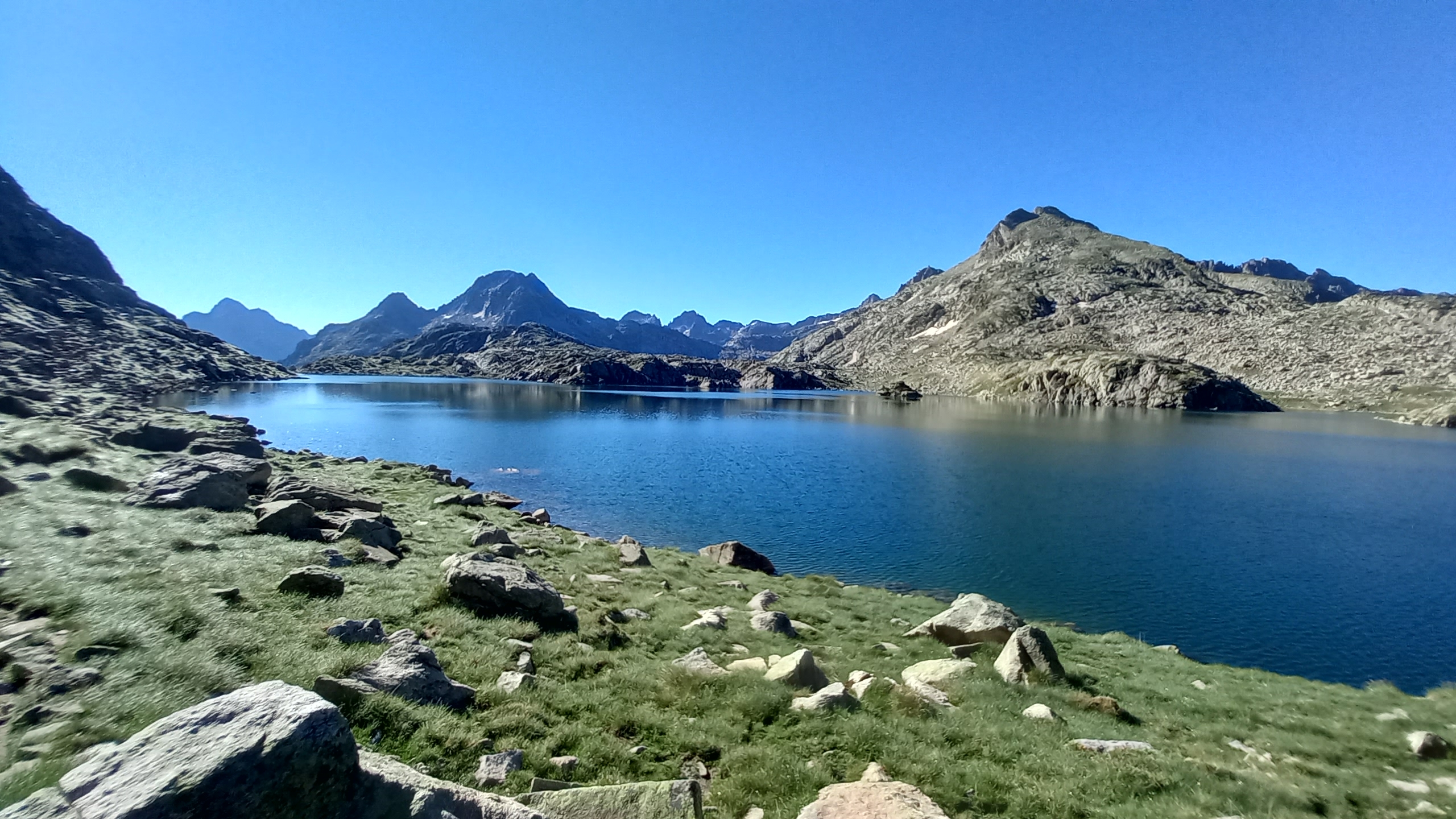 Around the corner was the Lac Tòrt de Rius, which had some high mountain horses acting as trail guardians: 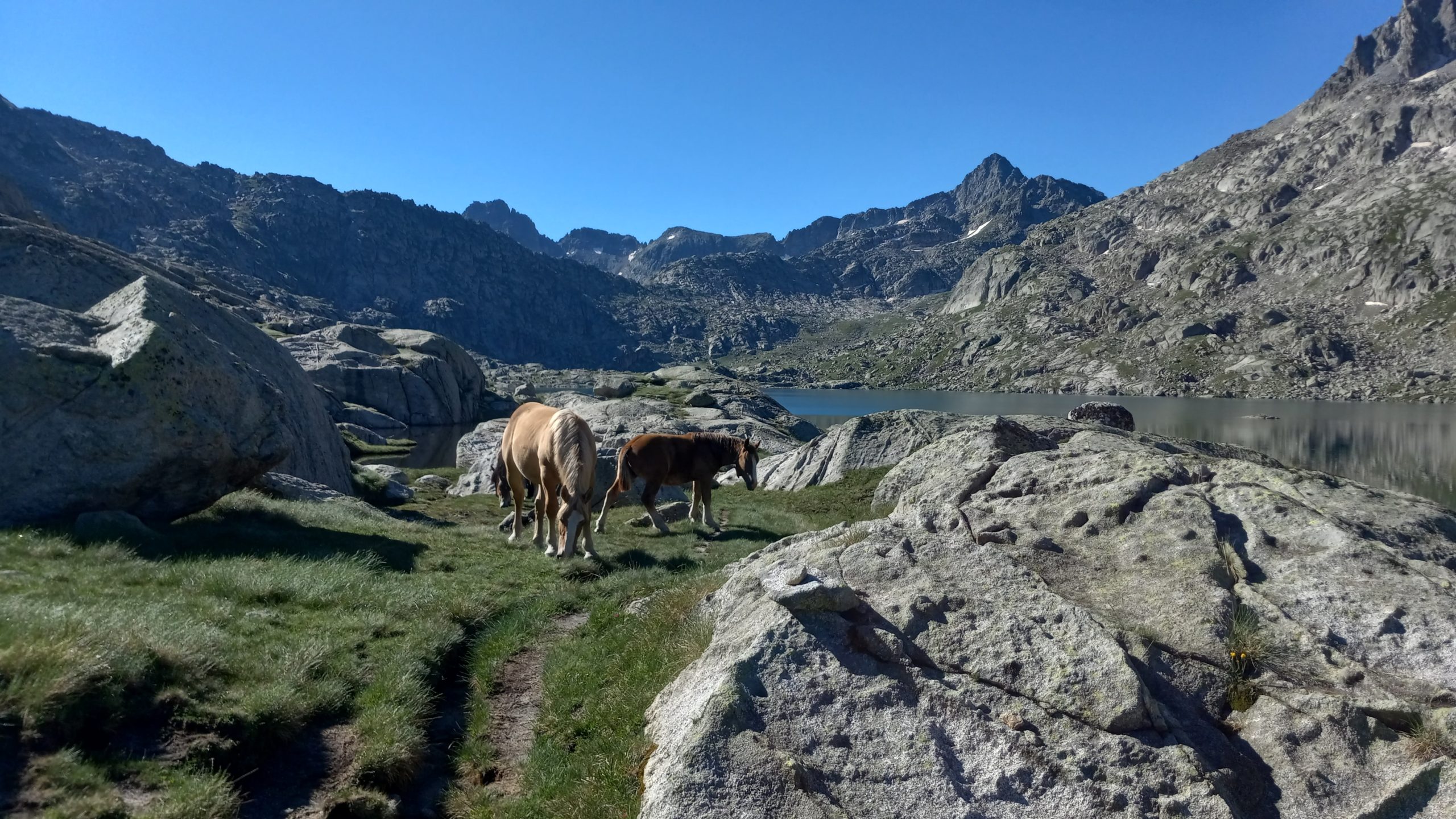 The pass at the top of the lake was tricky to navigate (cairns and a rock maze) but once at the top the view onto Lac de Mar was absolutely stunning.  The guidebook describes it as one of the most beautiful on the entire route and I can’t argue with that! 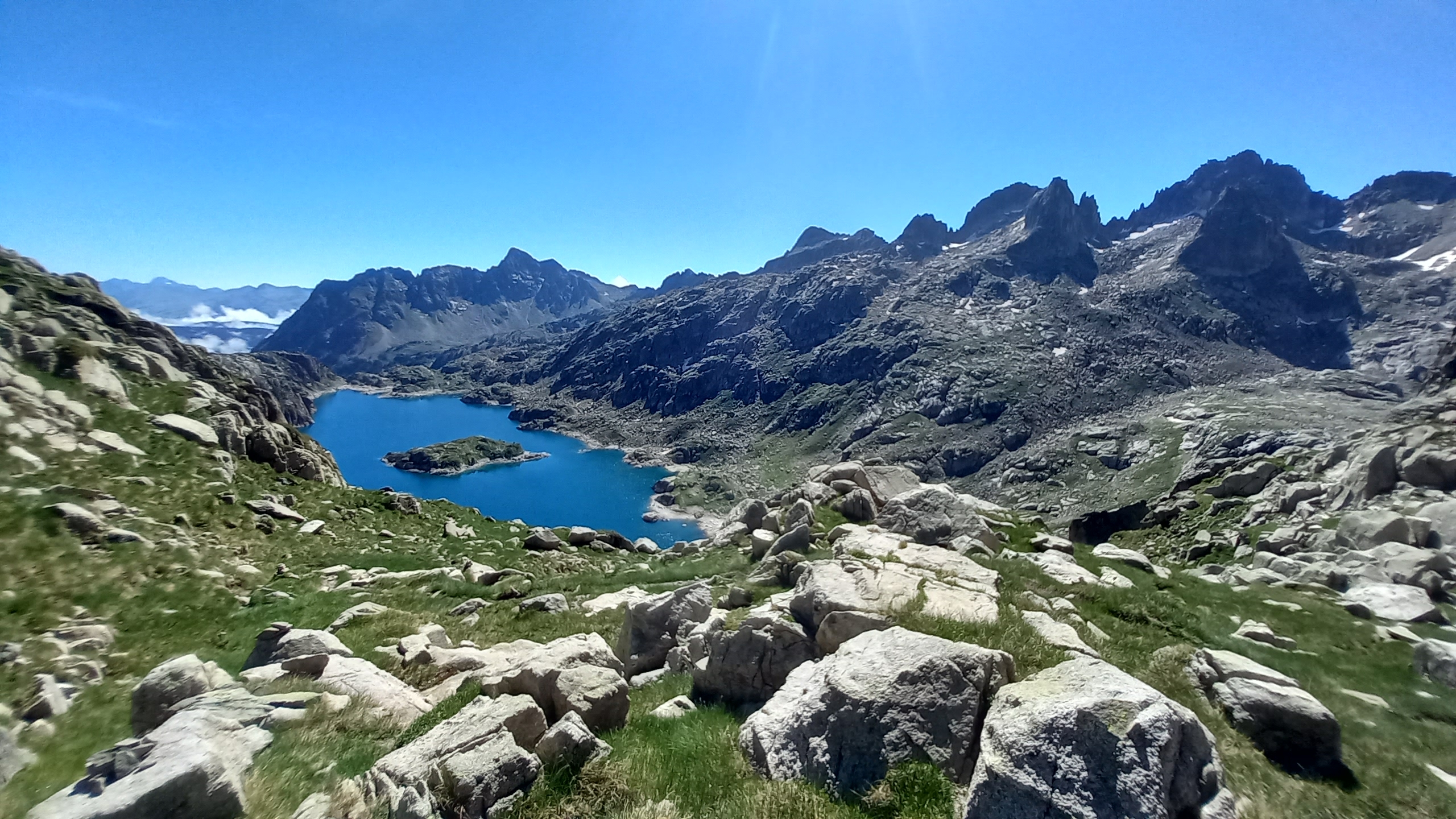 The descent down to it was incredibly steep with a fairly eroded path, but it was manageable all the same.

The route wound around the south edge of the lake, climbing and falling in little spurts.  I began seeing more hikers, a sure sign if a popular and easily accessible refuge or trailhead nearby.  I stopped for a snack break at the south end of the lake: 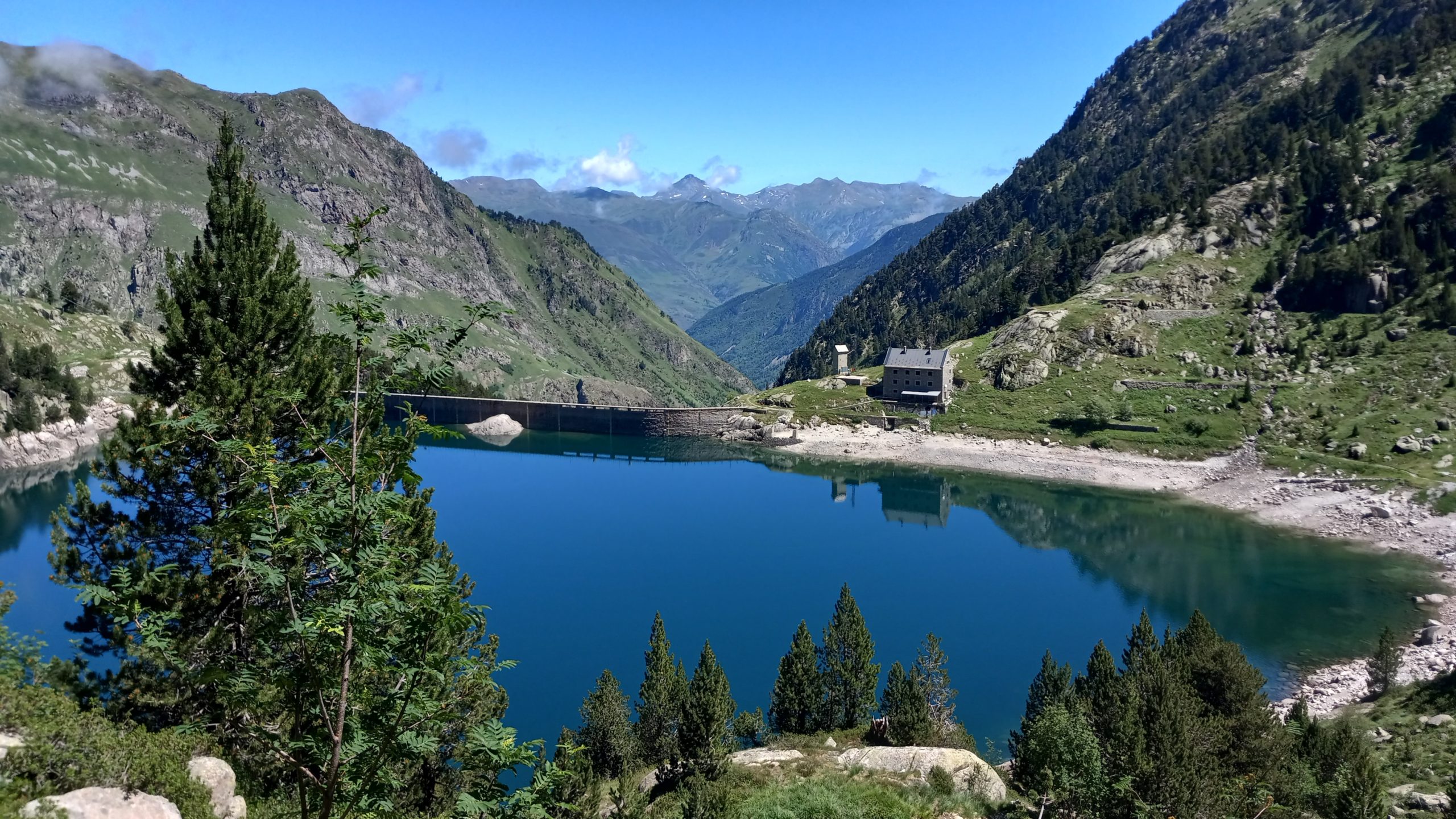 Then the trail dropped some more and sure enough, another refuge!  It was lunchtime and this refuge had wifi so I stopped for a longer break and when a hiker walked up with a clearly ultralight pack (it was a Pelante) I had to say hey.  He was a German hiker that earned the trailname Mumbles on the PCT in 2017.  He was going the opposite direction so we had lunch and reminisced about how awesome the US thruhiking community is then parted with the obligatory “happy trails!”

I climbed up to another lake, Lac deth Cap deth Port, then another pass, Coret de Goellicrestada, which brought me into the Parc National de Aigüestores i Estany de Maurici.

There were quite a lot of hikers about up there, and several more lakes and small passes.  The Estany de Mangades was probably the most notable: 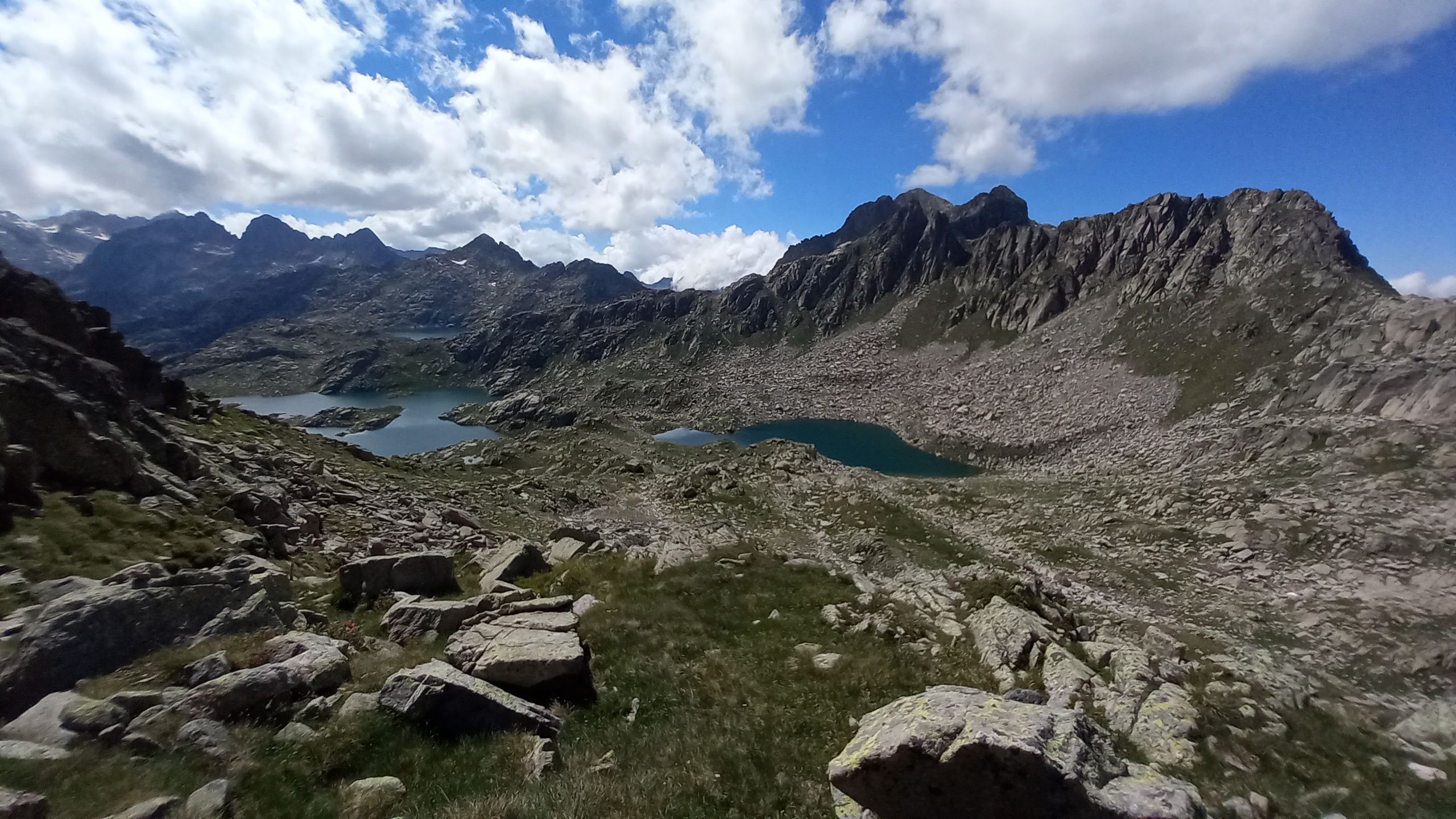 After the final pass the trail dropped down in elevation, as it does.  Passing by the brand new Refuge de Colomèrs which was reservation required I continued down to a tarmac road broken by established path shortcuts.

Once I was well away from the road I found a flat spot above the trail out of sight and set up for the night.  I hung my food again because I was definitely in bear habitat.  But as I was falling asleep a sharp barking noise very closeby startled me wide awake and made me wonder whether it’s bears or boars I should be worried about!

At this point I was only a few miles from Salardú so I slept in a bit.  When I felt the town food and luxury becon me I made the final descent along a long and gradual road (at points lined with very ripe wild strawberries!)  I paused at a hotel along the way for a cup of coffee because it was actually kind of cold that morning.

The sun rose higher as did the temperature and eventually I found myself a place to stay for a moderate price in Salardú. 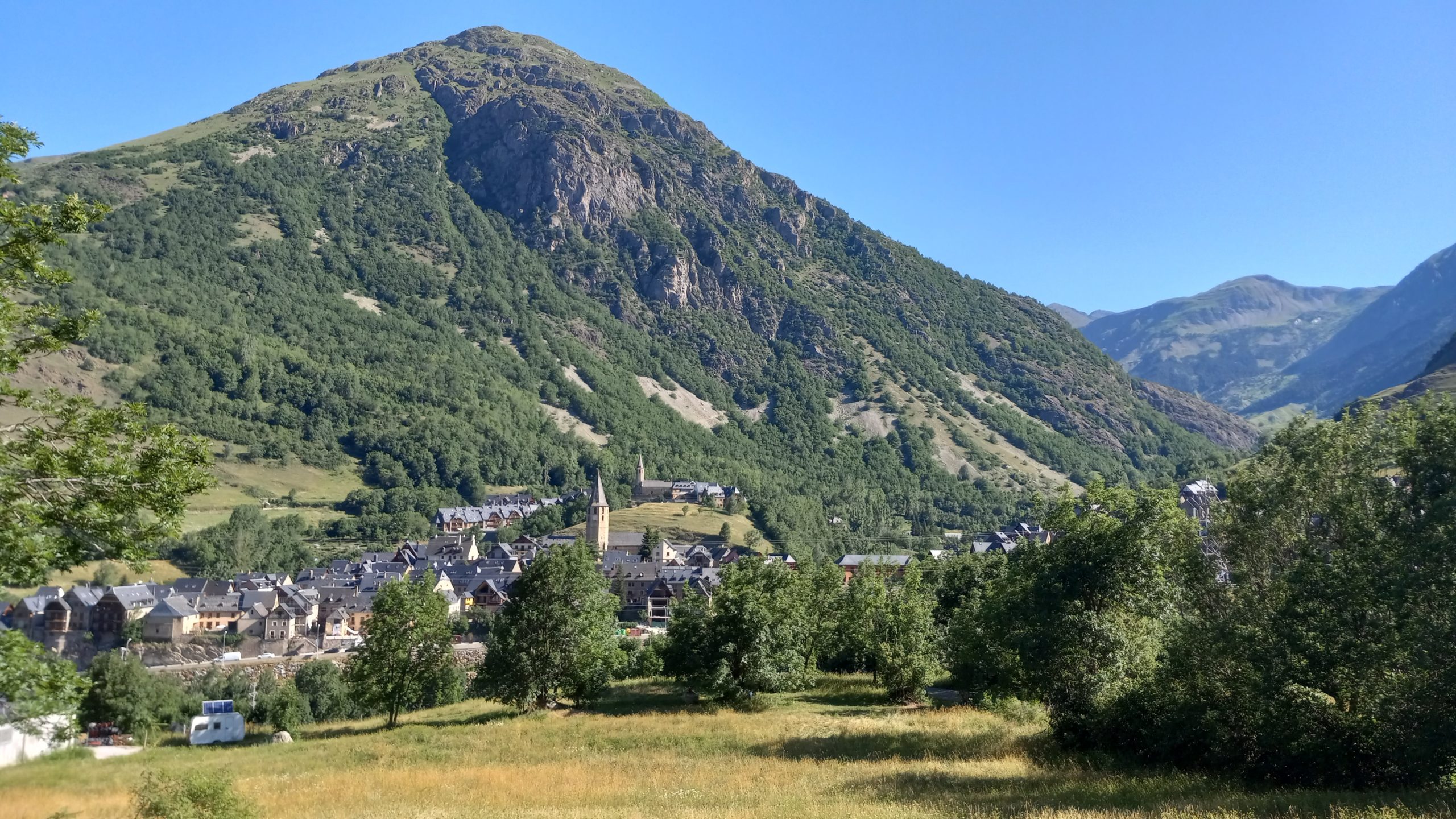 Salardú is a resort town near Baquiera-Beret (a stop on The Freeride World Tour, a big mountain ski competition I love to watch every winter) so it was kind of dead, being off season.  However, I found everything I needed and got well stocked and stoked for the next section of the route into the tiny country of Andora!