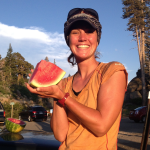 Hiking Hookups: Is the Trail a Perfect Place to Find Love?

An experience as profound as a thru-hike naturally brings people together. Tramilies unite, bubbles form, friendships blossom, and love can often stir. Knowing someone for a week on trail can bring you closer than relationships you’ve had for years.

On the trail, conversations are uninterrupted by cell phones or television, emotions are impossible to mask (just like your smells), your best and worst sides make themselves known, and sharing close quarters like a tent gives you nowhere to hide.

But if the spark of romance ignites during your thru-hike, does the fire continue burning throughout the trail and beyond, or is it more likely to fizzle and become stale like the trail mix rolling around at the bottom of your pack?

I’ve been curious about trail romance since I completed my second thru-hike on New Zealand’s Te Araroa (TA) in 2018, where I met my current partner of two years, Tom. Tom and I shared a one-person tent for three months straight, and I credit our intimate dwelling, the highs and lows we faced, and the hours spent in each other’s company with forming a solid foundation to build upon. 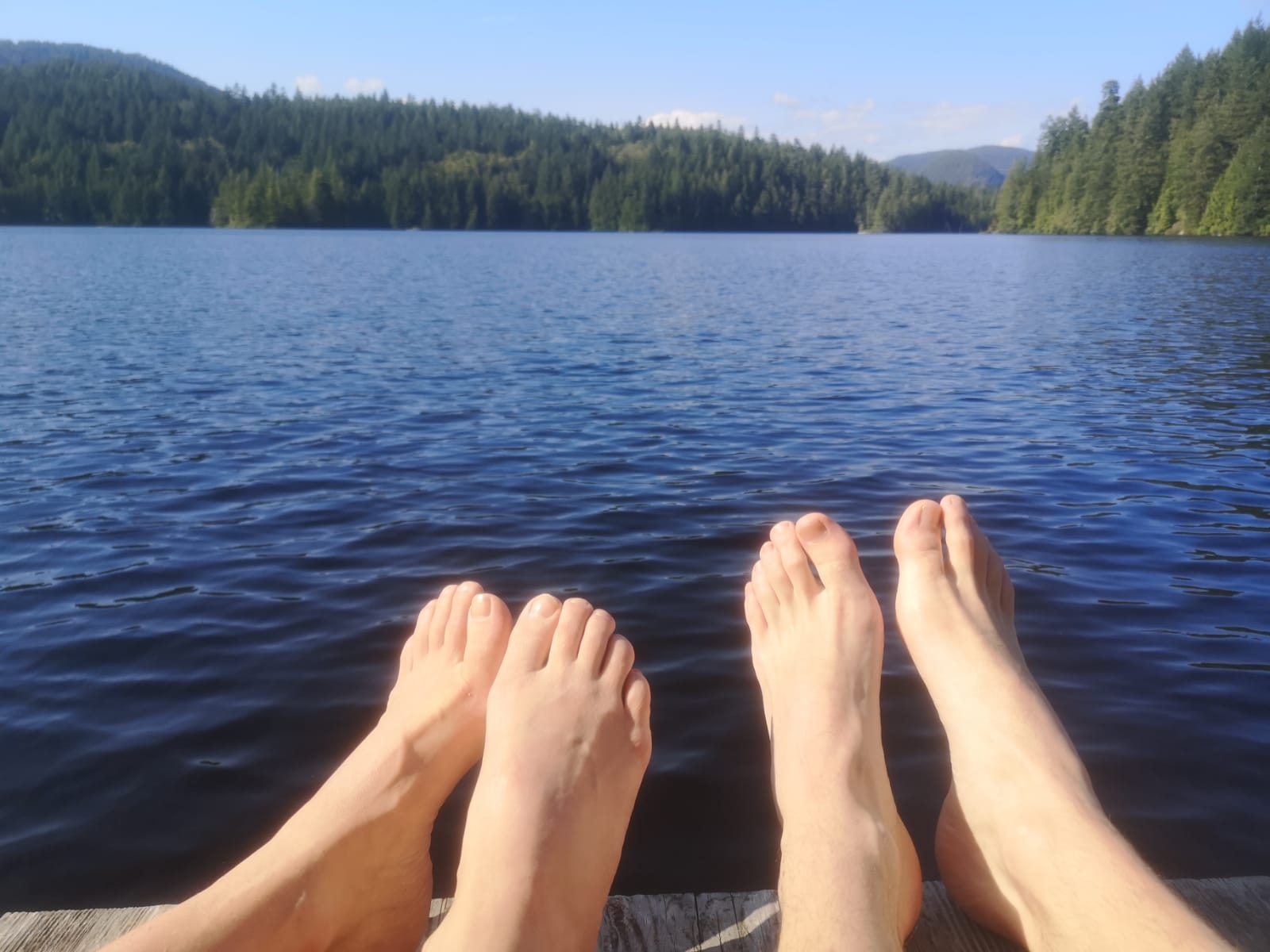 That’s not to say all trail romances end this way. I also fell hard for a man on my PCT thru-hike back in 2013. We had a whirlwind on-again-off-again romance that ended only two days from the end of the trail.

So having experienced both success and heartbreak, I was keen to discover if others believe the trail is a perfect place to find “the one.” I reached out to fellow thru-hikers in an attempt to get to the bottom of what makes a trail romance fire or fizzle.

Oats, who hiked the AT in 2019, met her current partner, Legs, almost halfway through her thru-hike. She said she and Legs are still living together and parenting their two dogs, Flynn and Thru. But Oats warns that one should not go into a long hike looking for love.

“The expectation daunting on you and everyone you meet as a potential partner will ruin your experience. Only after a few months of really indulging in ourselves and our own desires and whims were we happy to entertain each other.”

Oats believes the same factors that make or break a relationship off-trail apply to relationships on-trail, like “not communicating well, not having a strong enough connection, jealousy or drama.” 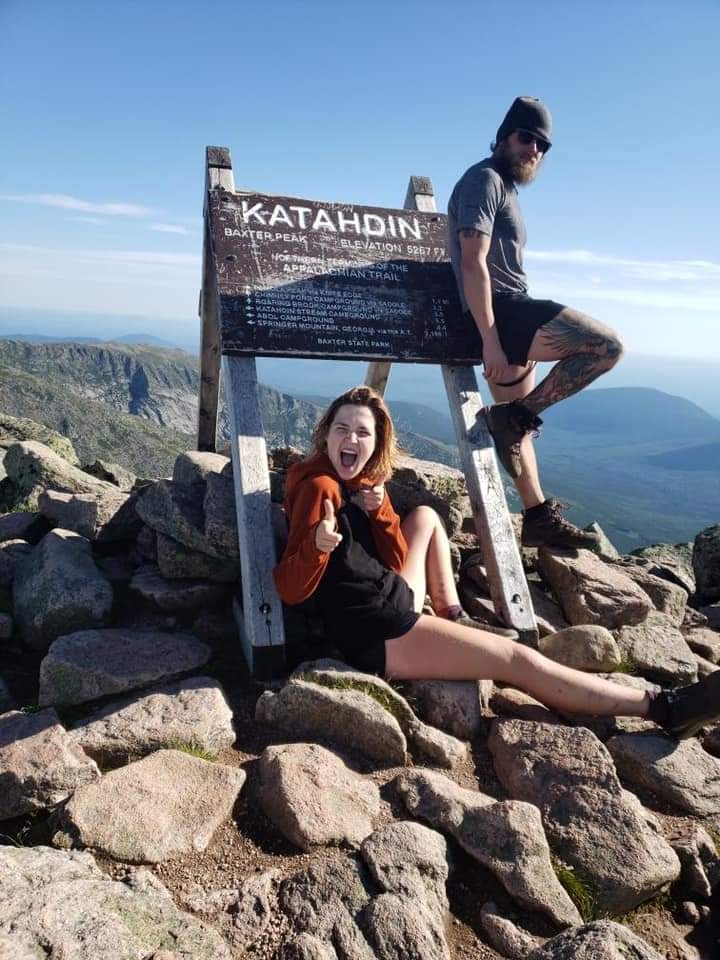 This was backed by many other thru-hikers I heard from, including Lifesaver, who hiked the AT in 2019. Lifesaver met her partner Buffet on day two and said open and honest communication about what each person expects and wants is vitally important.

“Understanding that our trail selves may not always align with our ‘real world’ selves requires grace, forgiveness, and support.”

Buffet agreed. “Enduring the trials of the trail are what helped build such a strong foundation that our current relationship is built on.” 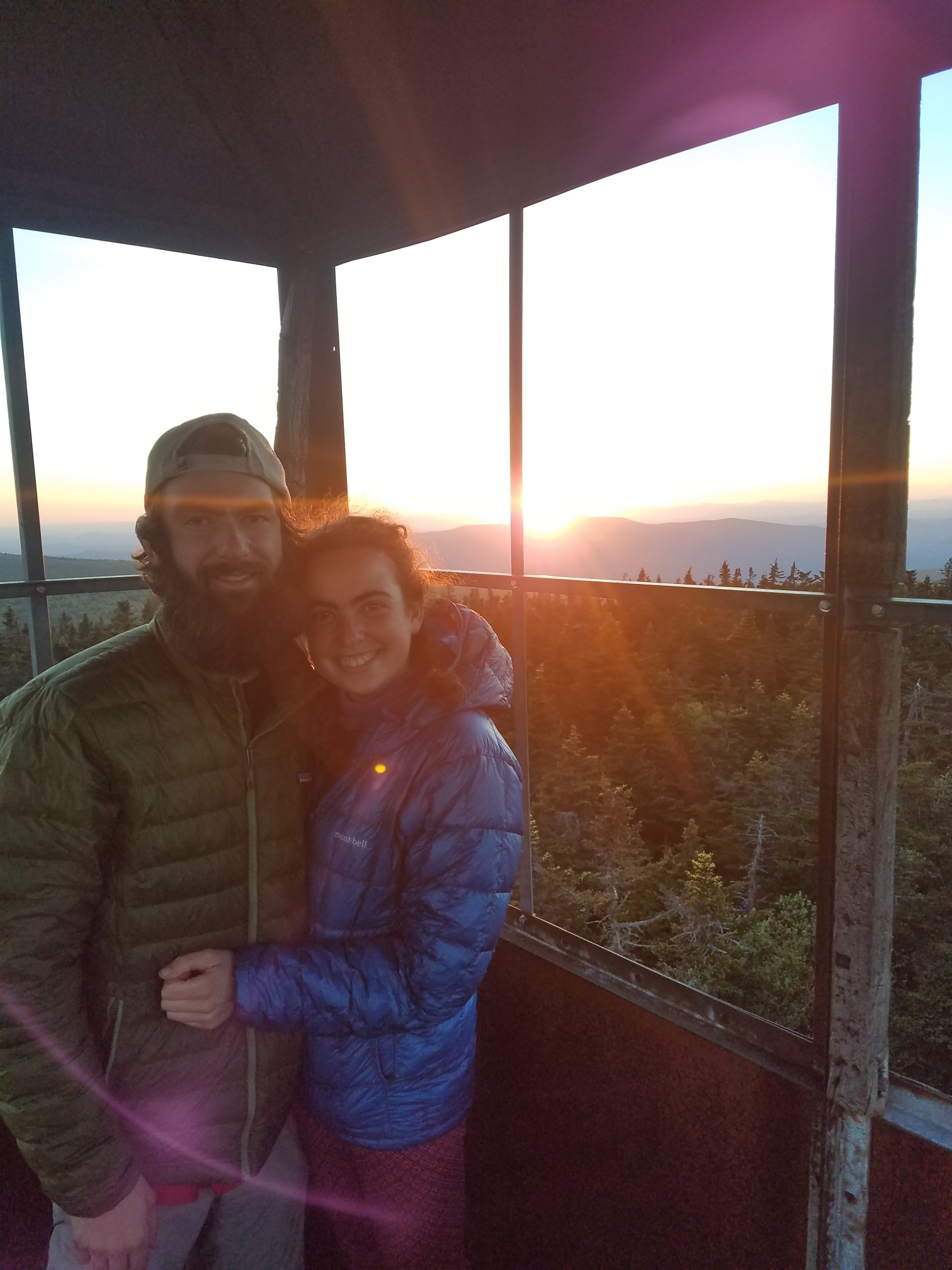 The trail uncovers a person’s true self. This was a resounding reason why relationships either go south or soar. “Throughout our thru-hike, we saw each other in our most vulnerable states during our highest and lowest times,” says Apple, who hiked the AT in 2019.

“Being put through the trials of a thru-hike together moved us through the fun, superficial stage of our relationship really quickly, and helped us connect, bond, and trust each other.”

Apple was introduced to Blackbeard when her rainfly zipper broke on a wet day outside Low Gap Shelter. Blackbeard was able to rig her tent to keep her dry, and the next day they left camp together and talked nonstop the entire day. Their romance eventually blossomed, but Apple remembers that Cupid’s bow didn’t strike the moment they began hiking together.

“Honestly, he was interested in me before I was interested in him. I was so focused on the hike and finding my groove I was oblivious to anything else. I actually decided to hike ahead for a couple of days so I could try out hiking away from a trail family.”

Apple adds, “But as we kept hiking together, he quickly became my best friend on trail, and I started to develop feelings for him.”

Waldorf, who met her partner on the fourth day of her 2016 AT thru-hike, says her tramily was set after getting caught in a snowstorm outside Hiawassee and she began to develop feelings for her current partner, Zataran. “You get to know someone very quickly and see them at their best (and their worst). After five months of hiking together, we knew more about each other than people who had been dating for years.”

Waldorf remembers she loved to wake up early and hike as many miles as she could before noon. Zataran woke up with her in the Smokies to do the same.

“It wasn’t until Southern Virginia I learned he wasn’t a morning person and was only waking up early so we could hike together.” 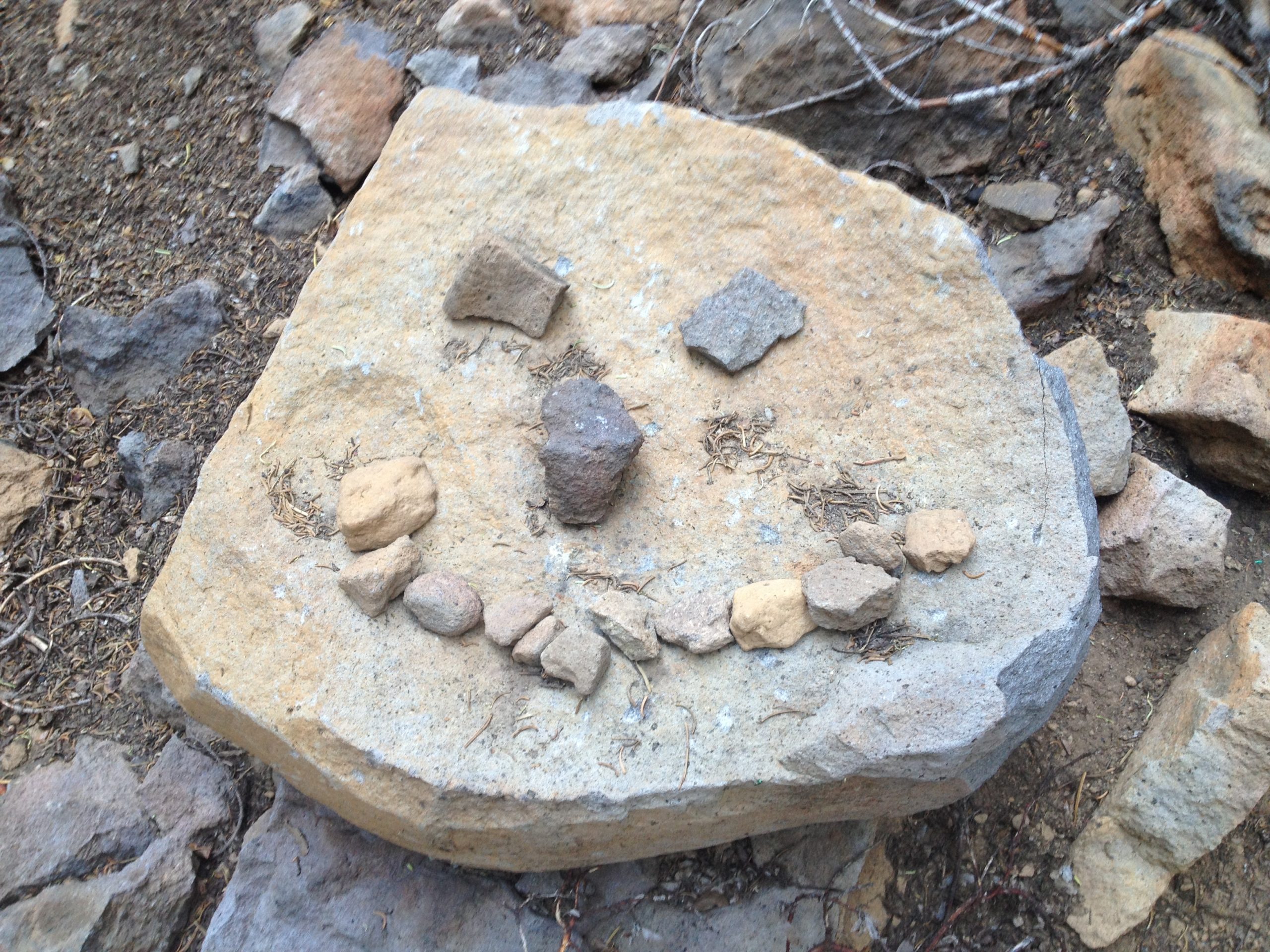 Small gestures go a long way toward helping a trail romance stick. In the same way a water jug in the desert or an ice-cream sandwich from a trail angel can completely alter your day, small gestures like a message sketched in the dirt, a treat left in your pack, or simply receiving a Band-Aid can have a lasting effect—as Green Slouch recalls from his 2019 AT hike.

“Throughout the entire trail she didn’t once use her first aid kit on herself. Instead, she had to use it on me when I tore up my feet in PA and took a knee dive into a bridge grating just outside of Roan Mountain.” 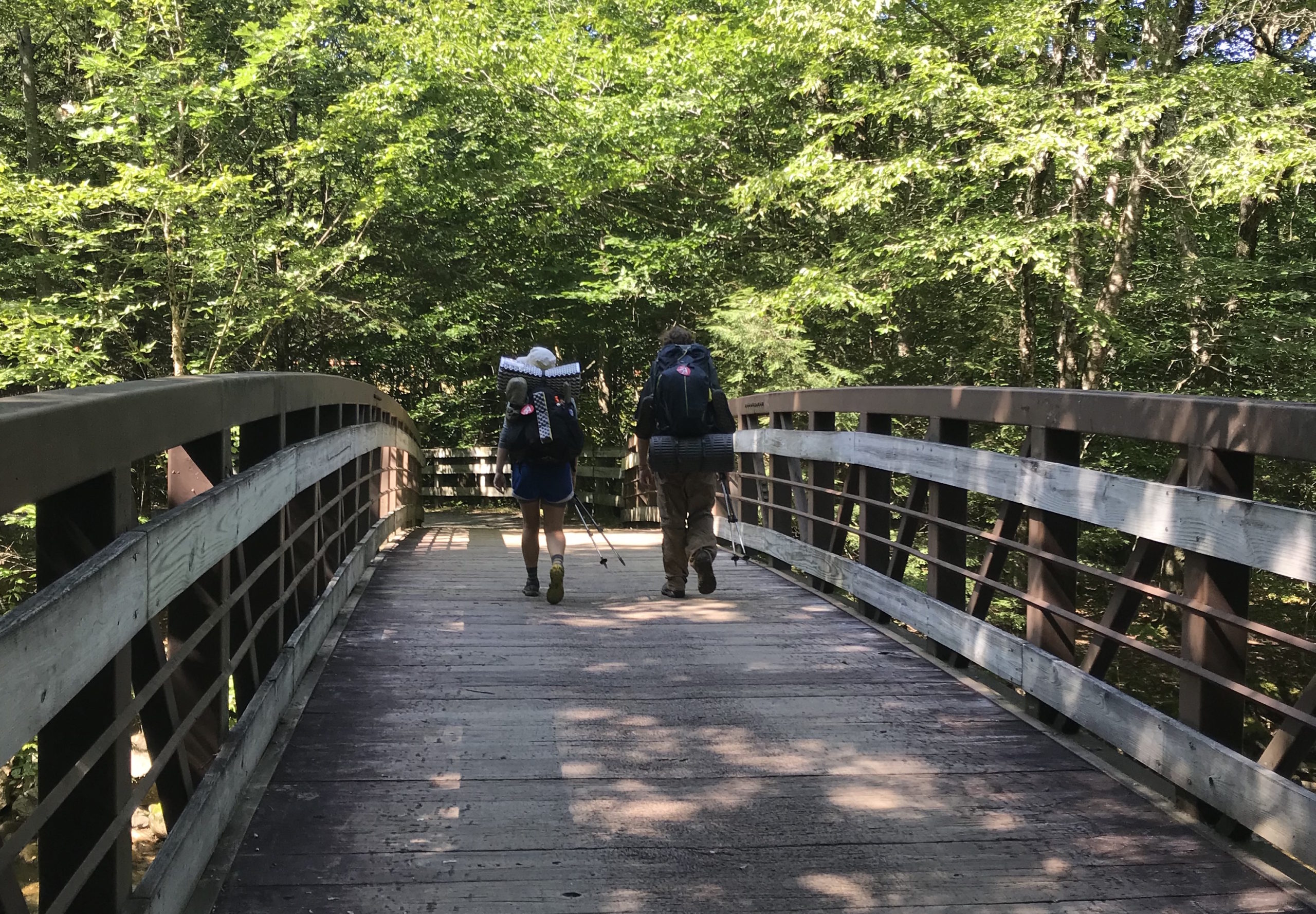 Puma remembers when her partner, Pusher, jumped off a bridge in Vermont during her AT hike in 2019, despite his deep fear of heights. “It took Pusher around 40 minutes, but he did jump, and I was impressed. I thought it was cute he wanted so badly to prove to me he could do it.”

There is, of course, the other side to trail lust, which should not be ignored. I have several trail friends, myself included, who had to deal with numerous unwanted advances from fellow thru-hikers. I’ve heard horror stories from hikers attempting to outrun someone because of unwelcome advances or even deciding to flip-flop to escape. Culligan, who hiked the AT in 2018, explains.

“You have to be careful that feelings are mutual because making someone uncomfortable can severely affect the quality of their hike.” 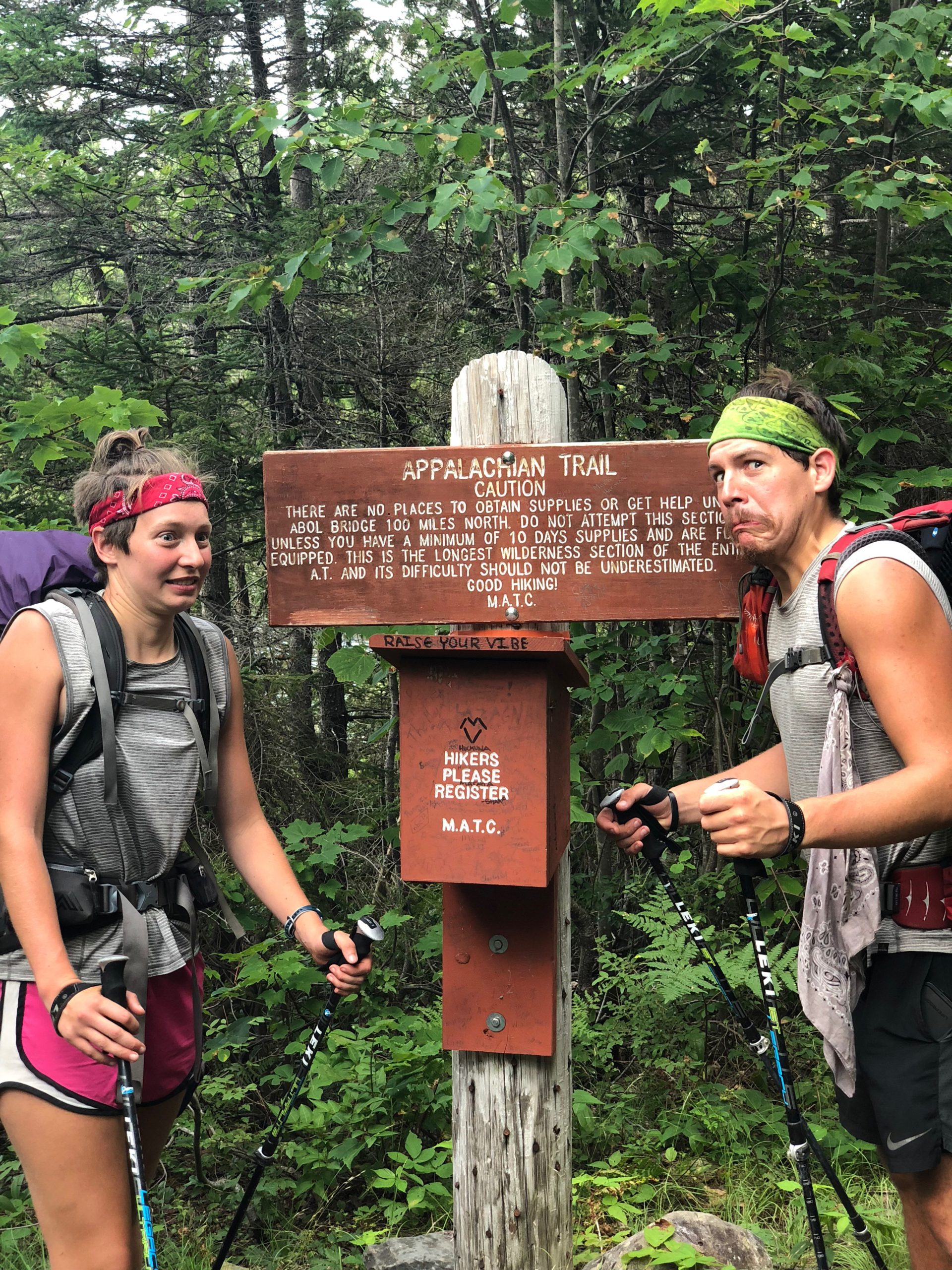 Photo courtesy of Not Dead and Culligan, AT, 2018.

I witnessed this discomfort several times when a polite refusal was built into a full-blown fallout. One close friend on the TA decided to leave the trail because the man she believed to be “the one” ended up courting another hiker.

“I couldn’t bear to bump into him (or them) again on the trail. In the real world, you can delete their number and unfollow them on social media. But on the trail you can’t escape. I was worried about bumping into him around every corner, and that wasn’t the way I envisaged my hike.”

A Thru-Hike Can Make or Break a Relationship.

I was sorry to see an established couple I met on the PCT separate after three trying months on the trail. When I spoke to my friend, who wishes not to be named, he told me it was a heartbreaking decision to separate.

“I guess I saw a side to her I’d never experienced in our off-trail lives. She was a lot more clingy and irritable than when we lived together, and I discovered her selfish tendencies were more pronounced on trail. It was a tough decision, but in the end, we chose to go our separate ways.”

Although the majority of thru-hikers I heard from reported success from their on-trail romances, many don’t make it beyond the terminus. However, it is heartwarming to know many can weather the storms of trail and civilized life. And if you’re lucky enough to meet that special someone on the trail, you can at least guarantee one thing: you’ll always share your passion for hiking.

Hello there, my trail name is Muk Muk. I discovered the wonders of thru-hiking in 2013 when I completed the PCT. Since then, I've thru-hiked the Ta Araroa in New Zealand, the Camino in Spain, and paddled in one of the world's longest kayaking races in the Yukon, Canada. I love being outside in whatever capacity life allows, and I look forward to sharing my stories and experiences with you.