How to Get Started Hiking New Hampshire’s 48 4,000-Footers

A new year means new challenges, both physical and mental. As a New Hampshire resident and self-proclaimed hike-a-holic, there is nothing more exciting than starting off the new year with a new list of peaks to tackle. I was introduced to peakbagging back in 2015 and the list that helped spark my obsession with hitting the trails was the 48.

To locals, the 48 4,000-footers of New Hampshire are the classic way to dive into peakbagging. Ask anyone who has hiked a mountain or three in New Hampshire what the most popular hiking list is and you will be hard-pressed to be told anything but the New Hampshire 48 4000-footers. The 48 are the most well-known mountains in New England because of the list, created in 1957. It has gained significant popularity among local hikers in the past decade. The list is so popular that several variations of hiking the 48 have been created to keep peakbaggers coming back for more. 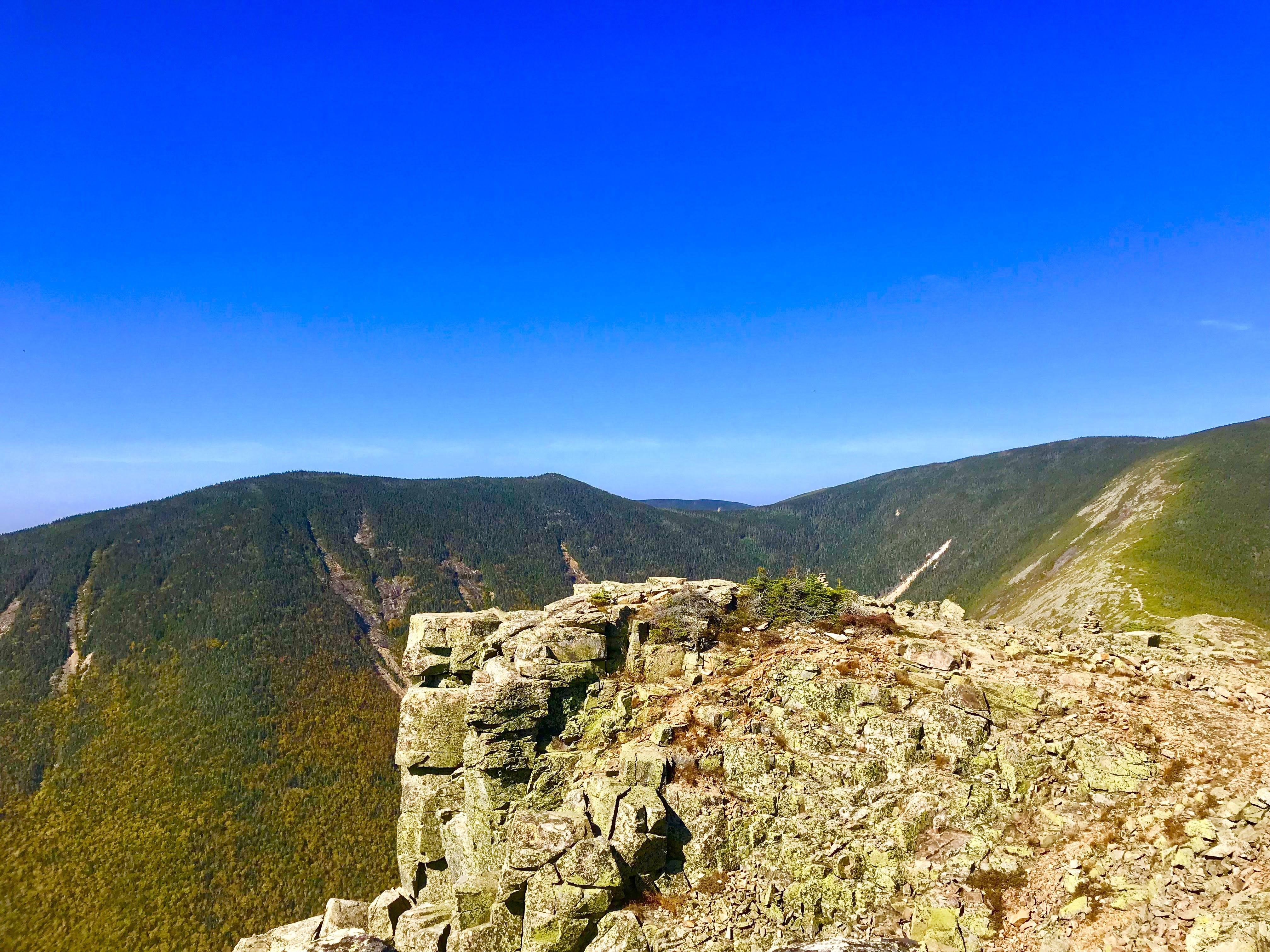 The history of the NH 48 will take you a little farther west to New York’s Adirondack Mountains. In 1918, two brothers, Bob and George Marshall, set out to climb all of the tallest mountains in the Adirondacks. They accomplished this feat in 1925 and the list of the 46 tallest mountains in New York was established. In 1937, the Forty-Sixers club in New York was created. Fast forward to 1931, when Nathaniel Goodrich of New Hampshire wrote an article in Appalachia Magazine proposing a list of 36 White Mountain 4,000-footers that he had climbed. The list was published in the magazine and throughout the next few decades different variations of the original list surfaced.

In 1955, members of the Adirondack Forty-Sixers and the AMC Four Thousand Footer Club committees met and established a list of 46 peaks in New Hampshire that would meet the criteria for being included on an official list of peaks, and the list was accepted by the AMC Council. In 1957, the official list was established, and in 1958 the first awards ceremony was held, with a total of 19 people awarded the title of Four Thousand Footer Club members. Fast forward to 1975 and 1980, when new geological surveying was conducted, adding Galehead Mountain and Bondcliff to the list of 4000-footers, and you get the current list of 48 we know today.

How Were the 48 Peaks Chosen?

Probably one of the most common questions people ask when they find out about the 4,000-footers of New Hampshire is how do they decide which peak qualifies for the list. There is a common misconception that only mountains taller than 4,000 feet in New Hampshire are on the list (which would mean there are only 48 mountains over 4,000 feet in New Hampshire in totality). This is simply not true. To qualify as a 4,000-footer, the AMC states, “a peak must rise at least 200 feet above the low point of a ridge that connects it with a higher neighbor.” This definition is what determines which peaks fall on the official list and which don’t (even if they are over 4,000 feet). Some examples of 4,000-footers not on the list are: South Tripyramid 4,100 feet, Little Haystack Mountain 4,760 feet, and Mount Guyot 4,580 feet. There are most definitely more than 48 4,000-footers in New Hampshire and I would encourage people to get out there and explore some of the peaks that aren’t on the list to mix things up a bit. 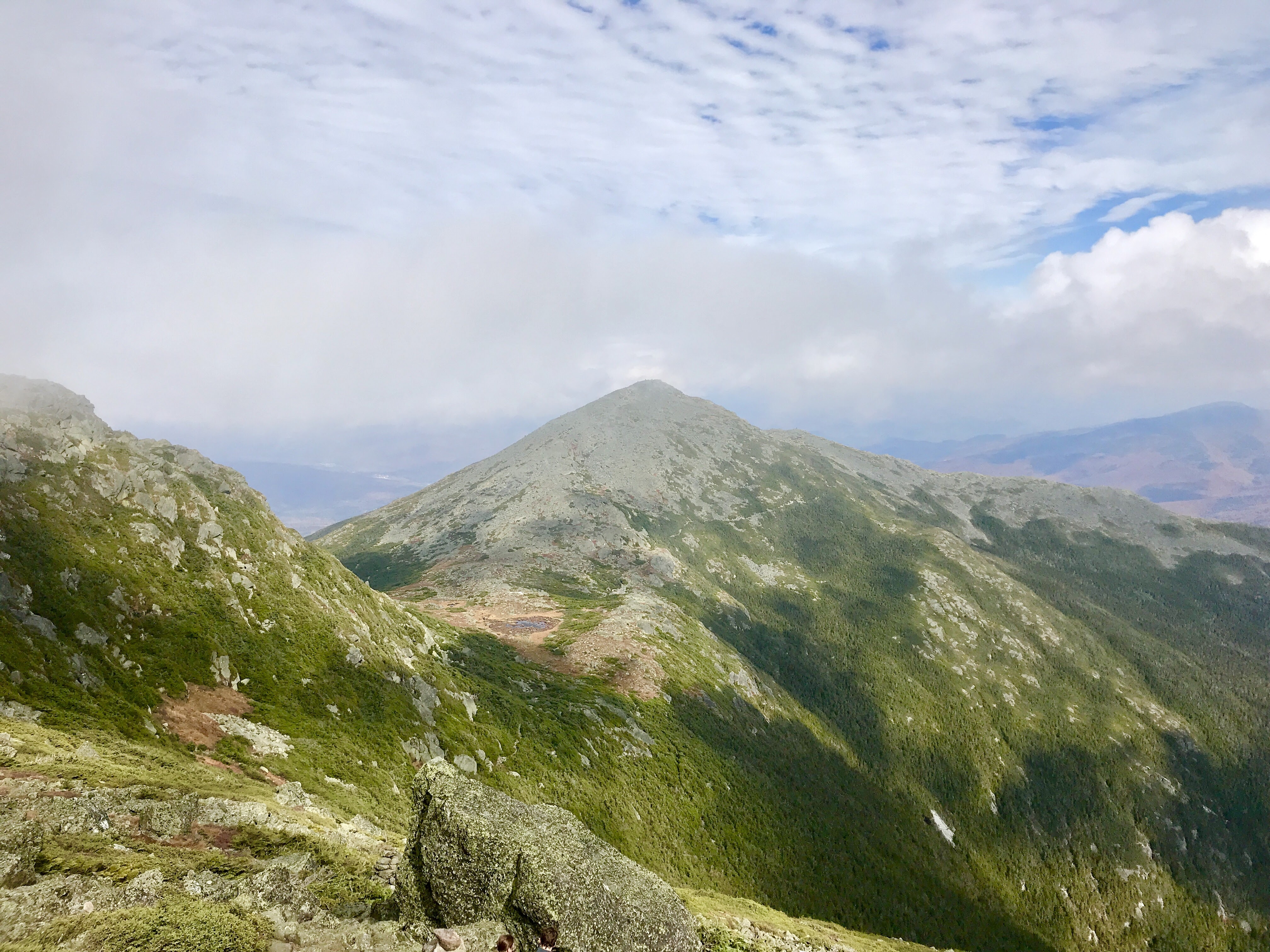 The rules for the 48 are similar to the rules for many of the other lists. For a hiker to be able to count their summiting of a peak on the list, they must ascend and descend the mountain(s) on foot, starting and ending at the trailhead. You may not use a mountain bike, vehicle, tramway, ski lift, or other form of mechanical conveyance in either direction. You may use skis, snowshoes, and sleds in winter to ascend/descend peaks. You may summit multiple peaks in a single hike and count each one toward completion of the list. Frequently asked questions can be found on the AMC 4,000-footer website. 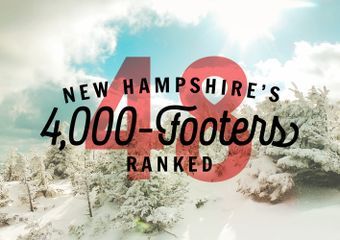 The 48 4,000-footers can be hiked in varying amounts of time, depending on how you go about it. Just like completing a thru-hike, everyone completes the list in their own time. Some people will complete the whole list in less than a year, some will take a lifetime to complete it. There are even those hikers who hike all of the 48 in a single thru-hike known as a Direttissima, or most direct route.

The difficulty of the 48 varies, which is part of what makes them so special. The different routes to the tops of each peak can either increase or decrease the difficulty of a mountain. The variation in trails, both in length and elevation gain, makes this list difficult to rank from easiest to most difficult, and there is a lot of debate about what the easiest and hardest mountain is. 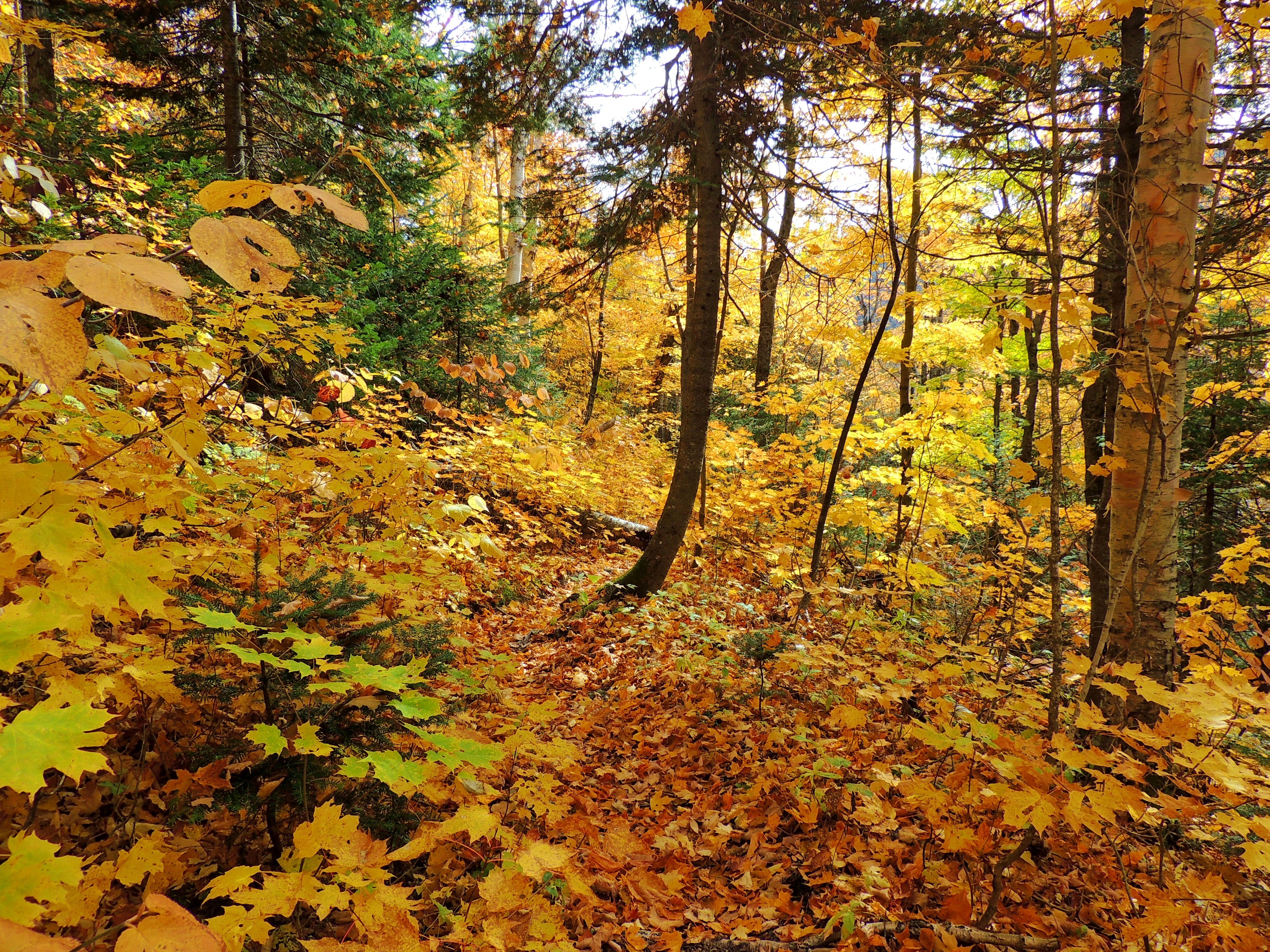 Fall in the Sandwich Wilderness.

There are many peaks on this list that offer outstanding views. The Bonds are iconic, and the views from the heart of the Pemigewasset Wilderness are breathtaking. Any of the mountains on the Presidential Range offer outstanding views, and the southern Presidentials are less difficult to climb, offering a bigger bang for your buck. On the other hand, Mount Cabot and Mount Waumbek, both the northernmost peaks on the list, can be just as beautiful and give the hiker a sense of being deep in the wilderness.

There are many peaks that would be great starting places, but there are a few that seem to draw people to their summits first. Ease of access, word of mouth, great views, and easier to climb, these peaks tend to be the ones people new to peakbagging discover a love for hiking on.

Mount Pierce and Mount Jackson are the two southernmost 4,000-footers in the Presidential Range and are on the 48 list. They can be hiked individually or peakbagged. These peaks offer outstanding views from their treeless summits, are easy to access, and are not too difficult to climb.

Mount Tecumseh is another one of the most popular peaks to start. Although this peak doesn’t offer a treeless summit, it is a short hike, not too steep, (2,400 feet elevation gain in 2.5 miles) and very easy to access.

Why Hike the New Hampshire 48? 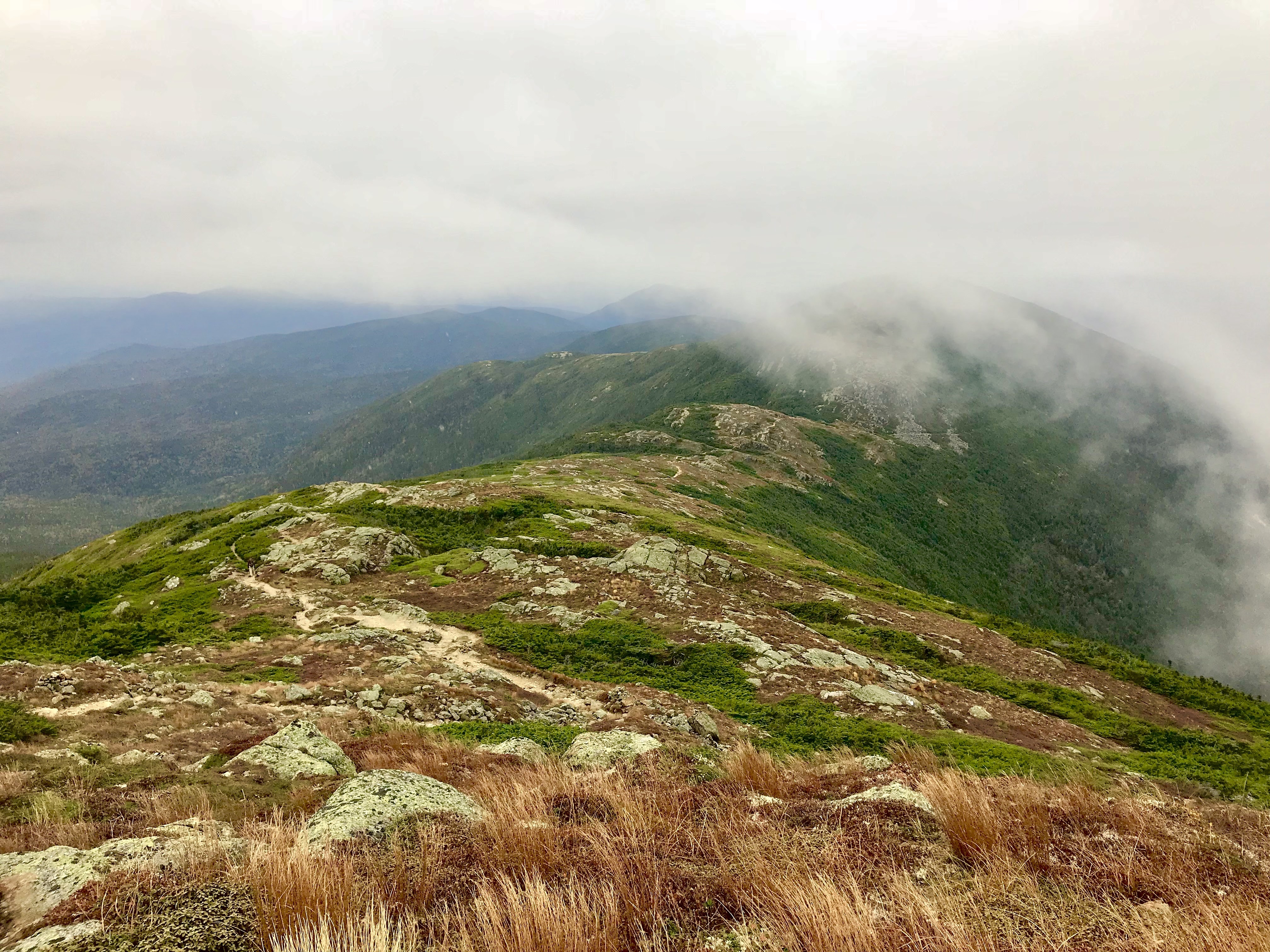 Let’s be honest; this list has something for everyone on it. The variation in difficulty, trail types, length, this list has it all. If you’re looking for a short hike with outstanding views, you can hit up Pierce, or Tecumseh. When you’re in the mood to go for something a little more off-the-grid, take on Isolation or Owl’s Head. The options are endless. Plus, this list is just the starting point for those looking to spend some serious time outside. There are several spin-offs of the 48 4000-footer list that will keep even the most dedicated peakbagger busy for a lifetime.

The majority of the peaks on this list are best enjoyed by newer hikers in the months when there isn’t snow on the ground. Although there are many who would argue that winter is the best time to hike the 48, (fewer people, fewer rocks, snow-covered trees) newbie peakbaggers are encouraged to go with a seasoned hiker for safety reasons. For more seasoned hikes, these are peaks that can be hiked year-round, with proper precautions taken. 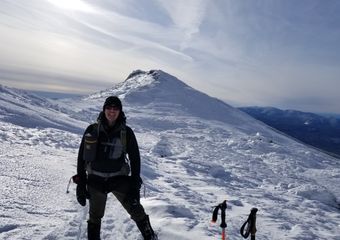 Winter Peak Bagging Tips for People Who Hate WinterAnother year, another trip to New Hampshire to visit family. Once again, I find myself voluntarily heading to the mountains with my father and his hiking buddies as I inch toward the world's slowest completion of New Hampshire’s 48 4,000-footers.…Read More

There is a plethora of information on the 48 both online and in print, but there are some particular sources that are my personal go-tos. First of all, even if you typically navigate via apps like Guthook, I highly encourage you to purchase a set of AMC White Mountains maps. While you’re at it, go ahead and buy the newest White Mountain Guide for descriptions of the trails you’ll be hiking. This book and maps are my #1 go-to before I hike a new trail.

Looking for a little more detail on the 48 4000-footers, including the history and geographical features? I highly recommend purchasing The 4,000-Footers of the White Mountains. You can also support a local legend (and one of the book’s authors) by ordering the book through The Mountain Wanderer website.

For everything list related, including information on list variations, head over to the AMC Four Thousand Footer Club. For trail descriptions not in the White Mountain guide, head to New England Hiking. For trail conditions, check out New England Trail Conditions. For weather, I prefer Mountain Forecast over the also-popular Mount Washington Weather Observatory.

There are a number of blogs and other websites with information on the 48. Simply search New Hampshire 48 list online and you’ll lose hours of your day reading about the different hikes and completions. The 48 4,000-footers are my favorite list to work on, and as I come close to finishing round two, and am a third of the way through round three, I have discovered more and more reasons to love these peaks that I call home.

As we ring in a new year, I encourage everyone to get out there and hike at least one of the mountains on this list. Even if you’re brand new to hiking, don’t be intimidated by the idea of the peak being too tall, or the trail being too long. Take a deep breath, strap on your pack, and discover the unparalleled beauty of the White Mountains.