The Pennine Way is a 268 mile starting in the middle of England and heading north, along the Pennines, to just inside the Scottish border. On 17th June 2015 my son and I traveled to Edale, a small village in Derbyshire; the location of the start point of the trail. Of course, in true British style, the trail starts at a pub in the center of the village: The Old Nags Head public house. We would be hiking the first 30 mile on a three day micro-adventure. 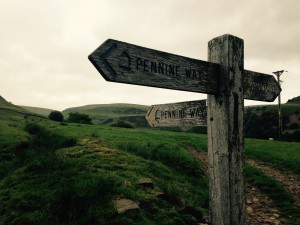 As you would expect of England the weather was overcast with some drizzle but we had no worries as the forecasters had said it would be light rain between 12-2pm then clearing up. There were a few hikers in the area, with some starting their hikes along the Pennine Way.

The first three miles of the trail were easy going, mostly flat (paving) stoned path leading through low-lying sheep fields. There was very gentle undulation in the terrain, which is just as well, as we had started to deal with the progressively stronger rain.

The last time I had been here was over 35 years ago so I have very little memories of the Kinder climb. I had read in articles that the climb was challenging and very hard. Standing at the bottom in low visibility and with the trail rising up about fifty meters before disappearing out of sight meant we had no concept of the hike ahead. In good spirits despite the rain we started our climb, just waiting for it to get harder, but before we knew it we were at a cairn and a sign marking the top. Having hiked the Appalachian Trail the previous year my perception of “challenging and very hard” is somewhat guided by the experience.

One of the major differences between the AT and the Pennine Way was the lack of blazes. In parts, especially in bad weather, the trail is difficult to locate. More than once we lost the trail and on one occasion, in sideways rain, it took us nearly an hour to locate it. 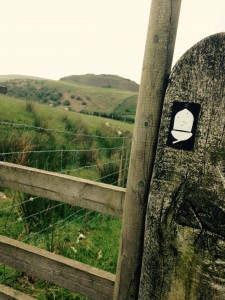 Trail marker is an acorn

Just like in the USA, the forecasters seem to have a different interpretation of drizzle rain with slight winds. On the summit it was pouring down with high winds making the rain hit us sideways. Unfortunately the bad weather meant we had no views on the summit of Kinder Scout and visibility was, at best, down to 20 yards.

We met two hikers, a man and a woman, whose accent was not local. Turns out that they were from San Francisco over to hike the Pennine Way. Interestingly the woman was a former Appalachian Trail (AT) thru-hiker (2007) and had heard about the Pennine Way during her AT hike.

The trail seemed to change constantly from being wide-open moorland to sinking into deep peat bog with areas which were rocky and very very wet. Crossing streams several times and boots sinking into the black peat mud meant our feet  stayed truly soaked.

Finally, as the weather started to clear, and knowing we were getting closer to the camp for the night we picked up the pace a bit. But unfortunately this was a mistake. In a moment of lack of concentration while crossing a stream I slipped, and ended up on my back in the running stream in turtle fashion. My head was lower than my feet and my pack locked me into the turtle position as I was wedged between two rocks. Water poured down my rain jacket sleeve, my trousers and filled my boots. Callum had to help get me out my predicament and climbing onto the bank my worry was the water had soaked my pack contents. However, a quick inspection confirmed that the Hyper Light Mountain gear Cuben Fiber backpack was, indeed, waterproof!

The first night we stayed at a farm house Bed & Breakfast (B&B) and were soon settled in having cleaned up and hung our clothes up to dry. We were to late for a meal so used our hiking food supplemented with cold coke from the fridge.

The hike the next morning was very pleasant, a flat path surrounded by trees along the side of a reservoir in clear weather gave us hope of a good days hiking ahead. The trail headed up a gully leading to a climb, which was steeper than the previous day and made more difficult by the rocks jutting out. However it wasn’t a long climb and once on top there was a great views, helped by the clear weather. The trail runs along the edge of the ridge-line and gave great views for 180 degrees.

Coming down off the ridge-line we entered a moorland terrain which allowed the wind unhindered access to the trail. At times it was so strong I was blown off the flag stone path and onto the boggy peat. The terrain was pretty level with only small rolling climbs and descents.

We took a side trail to a small rural town called Marsden, we had a wander around and purchased some cold coke (nothing changes no matter where in the world I am hiking) then caught a bus to The Carriage House Inn about 3 miles away.

We sent up tents behind the pub and proceeded inside for a hot meal and couple cold beers. The food was excellent and although quiet, there was a constant stream of customers coming in and out. Two other hikers were at the pub and we chatted about the hiking.

The wind didn’t abate all night and I didn’t get great nights sleep. In the morning we packed up and caught a bus back to Marsden where we grabbed some breakfast and caught a train back to the city.

My first experience of hiking the Pennine Way was positive, despite the first day’s weather, lack of views and wrong direction I still leave enjoying the time. Of course hiking with my son again made the trip so much more enjoyable and I couldn’t imagine gaining the same pleasurable experience without him being there.
< Previous Post
Next Post >