The History of Mount Washington

Here’s a surprise – people like the view from tall mountains. Shocking, right? This is especially true when the view is from “The Largest Mountain in a Given Location”. Then the desire to climb said mountain is doubled. Oh, you’re telling me people have died trying to summit? Well then, if it’s worth dying for, I definitely need to check it out.

Check, check, and check. But what makes Mt. Washington different from similar mountains – say, for example, Mt. Everest? The answer lies in Mt. Washington’s accessibility. Are you elderly, disabled, or otherwise unable to make the 6,289-foot climb? No worries, we got your back. Just drive your car to the top or, better yet, take a train.

How did a mountain with the worst weather in the world come to be such a tourist destination? Why did this happen? To answer your questions, and more, let’s dive into the history of Mt. Washington. 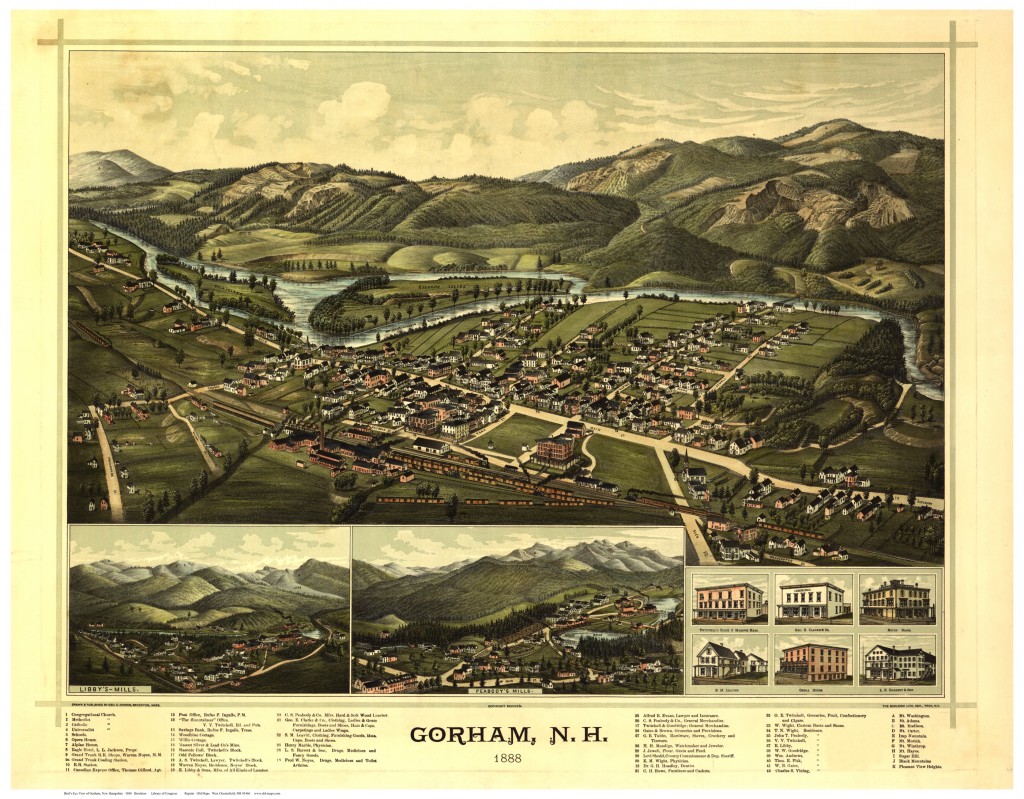 Historic map of Gorham, NH, with railroad and train. 1888. Library of Congress.

If I was to point to a singular event that turned Mt. Washington from wilderness outback to tourist attraction, it would be the creation of the St. Lawrence & Atlantic Railroad.

In 1851, the town of Gorham was lucky enough to become a stop on this line running from Montreal, Canada to Portland, Maine. Trains bring tourists, and tourists boost local economy. Already hotels were springing up around Gorham, and plans were made to construct more along the mountainside, taking advantage of the views.

And what do tourists want to do when they arrive to the town at the base of the largest mountain the Northeast US?

They want to go up that mountain, of course.

In 1819, Abel and Ethan Crawford were the first to blaze up to the summit of Mt. Washington along the Crawford Path. This was later turned into a bridle path, in hopes of attracting tourists. But the hike was still arduous, and the weather still potentially fatal. A tagline along the lines of “Hike this long and difficult path in dangerous weather to the summit” probably wouldn’t have attracted many tourists.

Something had to be done. And everyone, from the railway company (which funded the road construction) to the town officials, knew they were sitting on a golden goose. The potential revenue from a Mt. Washington hotel and observatory was enormous. Both of these required easy access from the base. Thus, in the summer of 1854, construction for the Auto Road began.

At the time, it was still called the Mount Washington Carriage Road. Workers toiled between ten and twelve hours a day, hauling supplies up the mountain via horse and oxen. With no accessible machinery, boulders and gravel had to be moved by hand. Instead of dynamite, workers used black powder to help clear the path. They labored even through the turbulent weather, sleeping in tents and shanties. 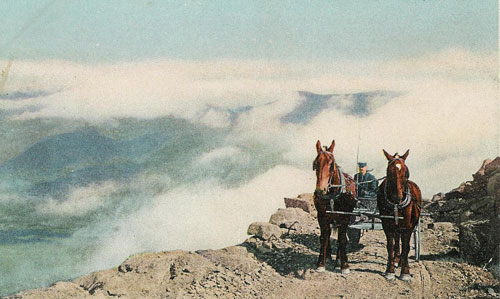 By autumn 1856, when the road was halfway complete, the money ran out. Three years later the Mount Washington Summit Road Company was formed, and they took over funding the project. Construction began anew, continuing till 1861, when the Mt. Washington Carriage Road was officially complete. The 7.6-mile winding path extended from Pinkman Notch to the Summit of Washington.

A toll system was set up, with revenue doubling every year until 1869. In that year the cog railway was introduced as an alternative route. It turned out many visitors preferred the short trip along the railway, opposed to a daylong open carriage ride along the road. Use of the Carriage Road stagnated until the early 1900s, when the motorcars were introduced to the American public. The rise of automobile popularity rejuvenated use of the road, and it was officially renamed the Mount Washington Auto Road.

In 1861, the same year the Carriage (Auto) Road was opened, Sylvester Marsh received a patent to construct a railway to the summit of Mt. Washington. Marsh had summited Mt. Washington four years earlier, where he hiked through a rather dangerous storm. This supposedly inspired him to create a safer passage to the top of the mountain. 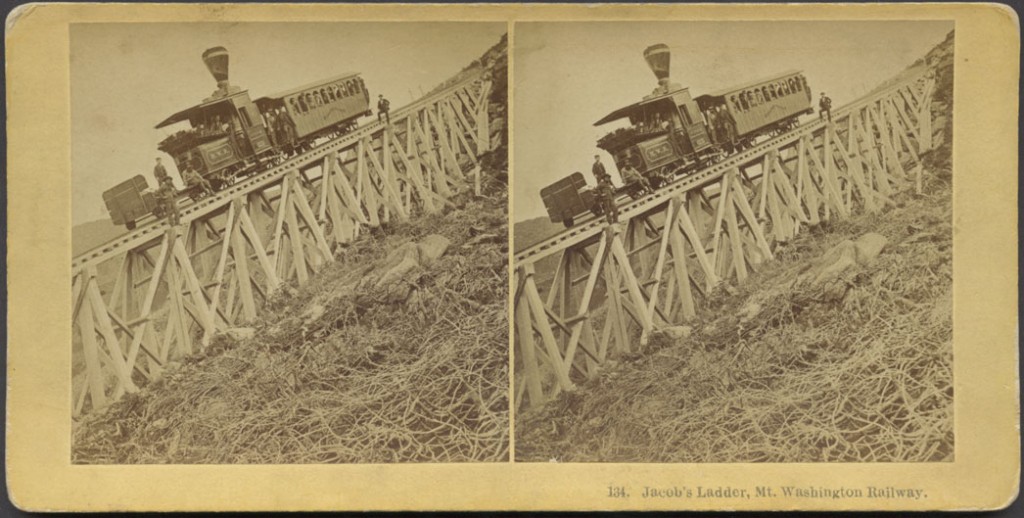 Marsh received a charter for the railway construction in 1863. He desired to partner with local railway companies, but first needed to demonstrate the practicality and safety of his design. This occurred in 1866, on a ¼ mile railway at the base of Mt. Washington.

The weather on Mt. Washington – and throughout all of the Whites – can’t exactly be described as mild. Even in the summer, camping above tree line is risky.

Thus, the Appalachian Mountain Club decided to build a chain of huts.

These structures provided a safe location for hikers to hide away while avoiding the turbulent and often dangerous weather of the mountains. With both the road and the railway providing access to the summit, Mt. Washington was starting to receive a fair bit of foot traffic. This necessitated a building to house overnight guests – and hey, if it continued to bring in money, all the better for the Gorham economy.

The Mount Washington Summit House was opened in 1852, but was destroyed in a fire in 1908. The same fire also burned down the office and printing press of “Among the Clouds”, the Mt. Washington newsletter, as well as the stage office, signal station, train shed, and a portion of the Cog Railway. The Tip-Top house was the only structure unaffected by the fire, and can still be visited to this day.

Between the construction and the fire, the AMC found that Mt. Washington opened up access to the rest of the White Mountains. The continued constructing shelters and huts, to assist both hikers and scientists looking to study the region and weather of the Whites. 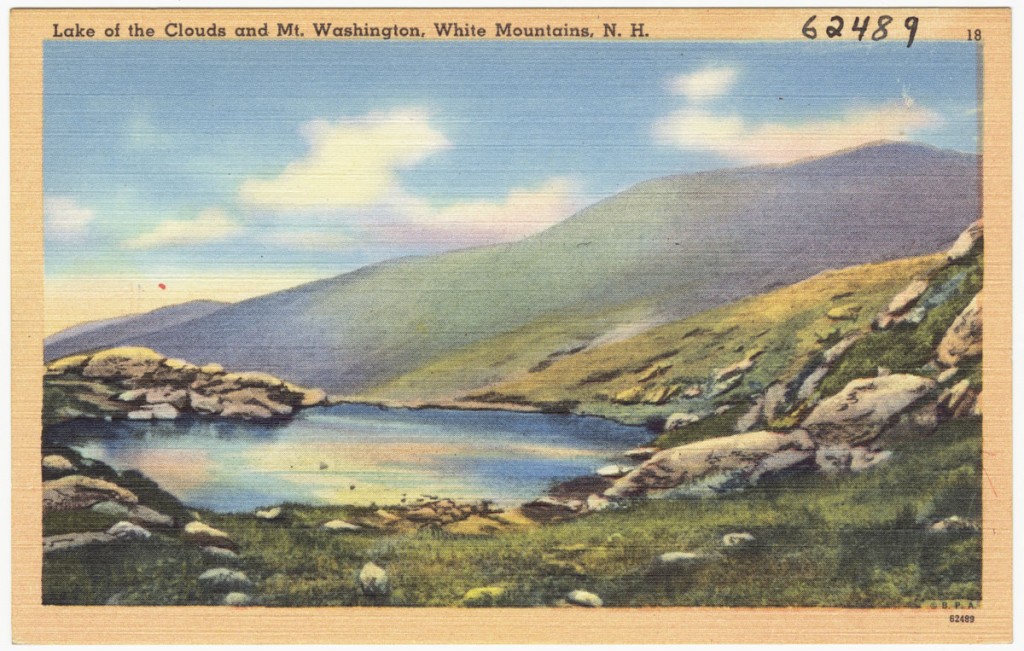 Lake of the Clouds and Mt. Washington. Vintage postcard. Circa 1930-1945. Tichnor Brothers Collection.

Lakes of the Clouds, the hut closest to the summit of Mt. Washington, was built in 1901. The hut was constructed in response to the deaths of two hikers the year beforehand. Allan Ormsbee and William B. Curtis were hiking to the summit of Mt. Washington for an AMC meeting in June 1900 when they hit a storm, and ultimately died of exposure. Lakes of Clouds started as a small cabin, and underwent five renovations to become the largest hut on the AMC chain. It can now sleep 90 hikers, and receives a fair bit of traffic both from Mt. Washington and hikers along the Appalachian Trail.

Mt. Washington attracts more than just tourists and hikers. When a specific geographical point is known for having the worst weather ever, it becomes a magnet for scientists hoping to improve their forecasting knowledge.

In 1870, a group of scientists hiked up the mountain with the intention of studying weather patterns. The data they brought back caught the attention of the United States Signal Service. They established an observation station at the summit of Mt. Washington in 1892. Forty years later, the newly minted Mount Washington Observatory took over for the Signal Service. 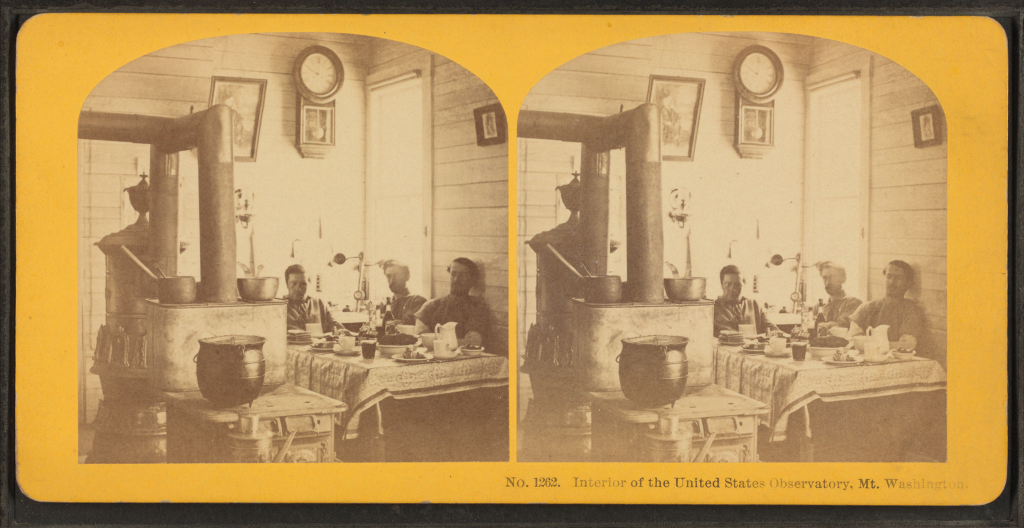 Here comes the story Mt. Washington is most famous for.

On April 12, 1934, meteorologist Sal Pugliuca was almost blown off the mountain while taking a reading of the wind speed that day. His efforts to record this data, along with those of Bob Monahan, Alex MacKenzie, and Joe Dodge, allowed him to get a measurement of 231 miles per hour.

This is the fastest recorded wind speed on the planet.

Once this data was published, the Mount Washington Observatory discovered it was no longer struggling for funding. The organization was became private and non-profit, with a mission to,

Observe and maintain a record of weather data, perform weather and climate research, and foster public understanding of the mountain and its environment.