March marks the time of year Marylee and Bob Breuer travel back to Hampton, Tenn., from Florida to help their daughter Stephanie and her husband Brian Dockemeyer polish up the family business — Black Bear Resort. 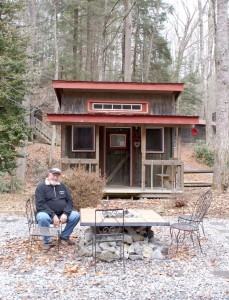 Bob Breuer rests outside of a cabin at Black Bear Resort. He said the fire pit is a ‘hot spot’ for guests to get to know each other. (Photo by Kayla Carter)

It’s the same time of year many of their future guests begin a long trek from Georgia to Maine along the Appalachian Trail, which is about .4 of a mile down the road from the resort.

“We had a total of 615 through hikers stay here last Spring,” Marylee said. “We get a lot of neat postcards from the hikers that completed the trail and that stayed with us. It’s really, really fun.”

Marylee likes to tell the story about a hiker named Princess, who desperately needed to rest her blistered feet. Princess was traveling with Rocketman and Ranger, who all took extra zero days to stay at Black Bear.

“Here’s the postcard,” she said. “I remember them. It’s great to see they made it all the way.”

After a random conversation about owning a campground a few years back, Stephanie said her husband began to research how to make it happen. At the time, she thought it was merely a pipe dream, but a realtor came through with a great deal on the property soon after. The Dockemeyer’s now live on the premises year round with their three children.

As a former science teacher, Stephanie said her current lifestyle is a dream come true. 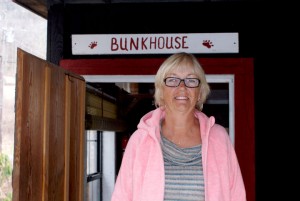 Marylee Breuer looks forward to returning from Florida to help out at the family business. (Photo by Kayla Carter)

In the future, Stephanie said they all hope to keep learning how to grow the business. The whole family is always trying to find ways to be even better hosts to their guests. Stephanie hopes more locals realize that through Black Bear, they can have a retreat in their own backyards, too.

“If we can get more summer traffic through here, that would be great,” Stephanie said. “After June it really slows down.”

The family finds a great sense of fulfillment in providing others with a slice of paradise during the warmer months. One of the best parts of the return on their investment is in the form of support from all AT hikers, Stephanie said.

“If we didn’t have the hikers, we would be done already,” she said.

Pride in their hard work revitalizing the resort emanates from their faces as they detail all the services they offer.

While the hiker lounge area called the Bear’s Den has a computer connected to the Internet, a television and DVD collection, Dockemeyer said she has witnessed some through hikers using the space for more creative means. 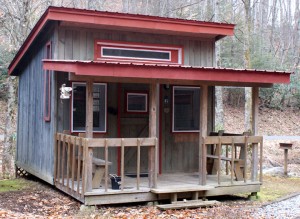 Guests may chose to stay in a cabin like this. (Photo by Kayla Carter)

“We had a group of hikers come through last year and stay for like three days to do slackpacking,” Stephanie said. “They brought trash cans in here, set them upside down and had a Risk game going. They had one game continuing for three days. Nobody bothered it.”

Leaving an ongoing card game undisturbed is one example of how the hiking community inspires Stephanie. She said Black Bear seeks to show their guests the same kind of hospitality and respect.

“We’ve got all the basics here,” Bob Breuer said. “We’ve got heat, laundry, cold beer, hamburgers and showers. Have I covered it all?”

That may be some, if not all, the amenities through hikers are looking for, but the resort also caters to many other kinds of guests. For example, the family enjoys hosting a large group of bikers annually.

“We have 180 bikers come in during Trail Days,” Bob said. “We time that. This will be the third year. They are the most fascinating people. They are trail riders. They have 1200 cc BMWs.”

“We are also offering, for at least the next couple years, to allow people to rent out the whole resort,” Stephanie said. “You can rent the whole resort for $1,000 a day for a minimum of two days.”

Another large portion of their clientele includes fishermen.

“The Conservation Department drops trout off of our bridge every year,” Bob said. “We have a lot of fisherman stay here.”

Stephanie said she has witnessed how vital the cold water running along the property can be for other guests as well.

“We get a lot of hikers with sore ankles and knees that will go sit in the creek,” Stephanie said. 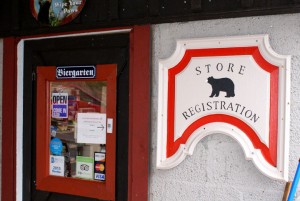 The creekside resort, which is located at northbound AT mile marker 418.5, offers guests an array of comfort levels. For solo hikers, there are two bunkhouses with a total capacity of 19 that range from $18-25 per person. There are a few size options for the eight cabins on the property, which range from $45-60 up to four occupants. Some cabins can hold up to 6 people for an additional $18 per person. Creekside tent sites are $10 per person. “Most of the hikers will double up and stay in one of the cabins,” he said.

Also, hikers suffering from any illnesses are asked to stay in a cabin and away from the bunkhouse. There is also a camp store on site for hikers to stock up on snacks and meals.

Now in their fourth year, the Black Bear family has an intrinsic sense of how to get all the work done in preparation for their open season, which runs through November. 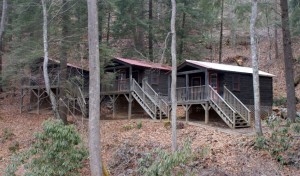 “He does pretty much all of the shuttling,” Stephanie said about her dad. “My mom and I split the office shifts. Dad also handles garbage and Brian is the plumber. I’m also the wood splitter and painter.”

Obviously the best aspect of owning Black Bear for them is family bonding, but they have all also added new skills to their resumes and keep building upon existing strengths through the business venture.

For more information, contact Black Bear Resort by phone at 423-725-5988 or online at blackbearresorttn.com.