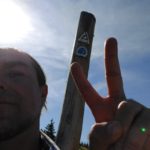 How The Metalhead Hiker Got Destroyed: Colorado Trail/CDT Thru Hike To Be Continued

After waiting a bit longer to even get on the Colorado Trail after a random knee injury, it just ended up being a few day hikes.

In June, maybe a week before I was going to start this great first thru-hike, I messed up my knee. Again. It wasn’t even a hiking-related injury. Just got in my truck wrong, pulled my leg back a little too far to avoid the steering wheel (I get in on my passenger side, driver’s side won’t close after opening), and bam, two months of lost time.

The knee never did come all the way back and physically, I questioned whether it was the right decision from that moment on.  Although I did get in some hiking on the CT and enjoyed the hell out of it, I thought it better to not even try it since my knee was pretty questionable at best.

When September came, I knew it was probably better to come up with a plan for the next go around. Whenever that is.  Also, I had started looking for jobs once I finally accepted this thru hike might not work out.

Even just day hiking, my knee is always up to something. Whether it’s from hiking itself, lingering injuries, or just getting in my truck wrong, it’s the one thing that held me back, at least after the hazy smoke was gone.

Next time I plan to go on a long-distance hike, I’m going to have my knee as close to 100 percent as it can be. At one point, it was as good as it was going to be and I had a chance to go for it and just didn’t.  Mentally, I’m into this hiking stuff and want to get to that next level, but physically, it’s always going to be a little questionable with my surgically repaired femur and knee.

Wasted Time, There is No Such Thing As Perfect Conditions

Honestly, I wasted some time dilly-dallying, questioning my knee’s ability to hold up and whehter it’s even a good idea to start in mid-September.  There was a good time for me to pull off this hike I had romanticized about for years, and I just didn’t do it.  May would have been the best time before I jacked my knee up.

September would have been a pretty good start, too, after the smoke cleared and the knee was kind of okay.  What I did see of segments seven, six,  and a bit of 25 in April on the Colorado Trail and the small stretch of the CDT to RMNP were absolutely the coolest hiking I have ever done.  It gives me a little solace to know that at least I got a taste of what is waiting out there.  It’s that little taste I got that lets me know it will be worth it when I finally do make this hike a realization.

I guess there really is no right time, right conditions, or right anything to start an awesome experience like a thru-hike.  When a person is ready, they just go.  Adversity, that’s what a thru-hike is. Stuff happens, then you figure out how to work around it, adapt quickly, and keep moving on with your hike.  Extreme heat, smoke from wildfires, trail closures, injuries, are all part of thru-hiking, and overcoming all that while somehow still enjoying your hike is the point.  It’s hard, frustrating at times, but in the end, it will ultimately be very rewarding.  It is a journey, and to me, this doesn’t seem like the end, it’s just an injury-riddled, smoke-filled, and late start to my thru hike.

It’s awesome to be out there, even if it’s just day hiking on an injured leg.  All in all, life’s pretty good if my only complaint is that a big hike didn’t exactly work out the way I thought it would.  The trail is always there, and there’s always next year.  Hopefully, even though the thru hiking season may be over, day hikes and maybe some overnights are still possible, so we’ll see.

In June, I started keeping track of the funny carvings in the trees along the CDT. Names, pictures, so and so loves so and so with a heart, you know, the basic tree carving pictures people do.  The funniest one was what I thought was an arrow pointing out the CDT route along the road carved into a tree.  It wasn’t an arrow, but some other shape that kind of looks like an arrow from a distance, but up close, I realized I had been trolled on the trail and was looking at a phallic symbol…yes, a penis carved into a tree. Still, funny as hell.

So, on my day hikes on the CDT and Colorado Trail, I really tried to be more extroverted and strike up conversations with whoever was talkative beyond just saying “Hi” and moving on.  In April, I was hiking in Ouray, and even drove down to see a part of the Colorado Trail on Segment 25 and did half of the Ouray Permiter Trail until my Yak Trax broke in the icy snow that was still melting.  I passed two ladies and we chatted for a couple of minutes, nice ladies. I swear I had seen them before but didn’t know where.  After coming home later that week, I thought about the people I had talked to and tried to remember their faces, their stories, and our conversations.  It struck me—the reason I had seen them before, or thought I did. Pretty sure they were on a TV series way back in the early part of the 2000s, still not totally sure, but pretty cool.

Another memorable encounter was in September, right after I got a new job and went on a day hike on Segment seven of the Colorado Trail.  So I’m finally at Gold Hill Trailhead, and right where the views really start up on top somewhere.  So stoked to just be there and test out the knee again! Long drive from up in Northwest Colorado for a day hike, but whatever.  Five miles total was the goal, and it was going to be dark in a few hours, so I hustled, pack and all.  I loved it, it was beautiful, I wanted to keep going, but I had a job and the plans were in flux.  At mile two something, I stopped, chugged some water, ate a Greenbelly bar, and enjoyed the view.  I started heading back down to my truck, I wanted to go find a spot to park, dispersed or not, and keep going. I was in love with the trail.  Responiblity, though.  Headed up the trail my way was this thru hiker with two dogs.  She was going for it and I found out after a small talk she was a CDT Southbounder. Heck Yeah!!  How was she doing this, I thought. Two dogs, big ass pack.  Don’t remember her trail name, but she was pretty awesome to talk to, and I wish her and her dogs all the best of luck and hope they are well on their way to finishing their Southbound CDT thru-hike!  That was by far the most memorable.

The other hiker I met was just a couple of weeks ago on my way to again try to start my thru hike.  Snowstorm coming in, I thought I could beat it and took my chance and headed for the CDT or somewhere on the CT to try this again, despite the weather. I ended up turning around not far from home because of the snowstorm headed in.  I turned off on a side road to turn around and head back home and saw a thru-hiker, big old pack and all. Not just a regular thru hiker, a Great Western Loop thru-hiker, super rare, I don’t know.  Just know not many people do that route and to bump into him as my thru-hiking plans fall through was kind of a bright spot for me and pretty memorable.  Shout out to Fish, who I talked to for a couple of minutes and told of his 6,000 plus mile hike starting by the PCT and doing the Sierras in May. Just amazing, and I hope he’s well on his way to completing his Great Western Loop adventure.

So Long, For Now

My thru-hiking attempt and season is pretty much over, but it was still memorable, fun and it’s just the beginning of my thru-hiking career.  Seasons change, opportunities like work arise and I’ll keep hiking.  Maybe I’m not as much of a metalhead hiker as I thought, not even a thru hiker yet, but I am a hiker and I will keep hiking because it’s what I love to do.

Hi, I'm Chris, trail name Slowride. I started hiking in 2008 because I needed a new hobby and needed to get out of a rut. I ended up really digging being outside in nature and just hiking all day and still do. I also love heavy metal music and live concerts.