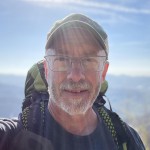 “I Challenge You To Not Take Any Photos”

My background is in photography, and I’d like to think of myself as a visual storyteller. I’m constantly taking photos of my outdoor adventures. It’s who I am and what I do. Words on the other hand, don’t come easy. I really have to work at them, even after years of experience in technical writing. I mostly use words to support images, rather than the other way around.

Earlier this year I backpacked a section of the AT from Deep Gap to Newfound Gap. It was Springtime in the Southern Appalachians, and the scenery was spectacular. Photographic opportunities were endless. So there I was, doing my thing, taking tons of photos to document the trip. Sitting in my tent at night, I’d select some of the better images to post on social media. It was good practice for blogging here on the Trek. 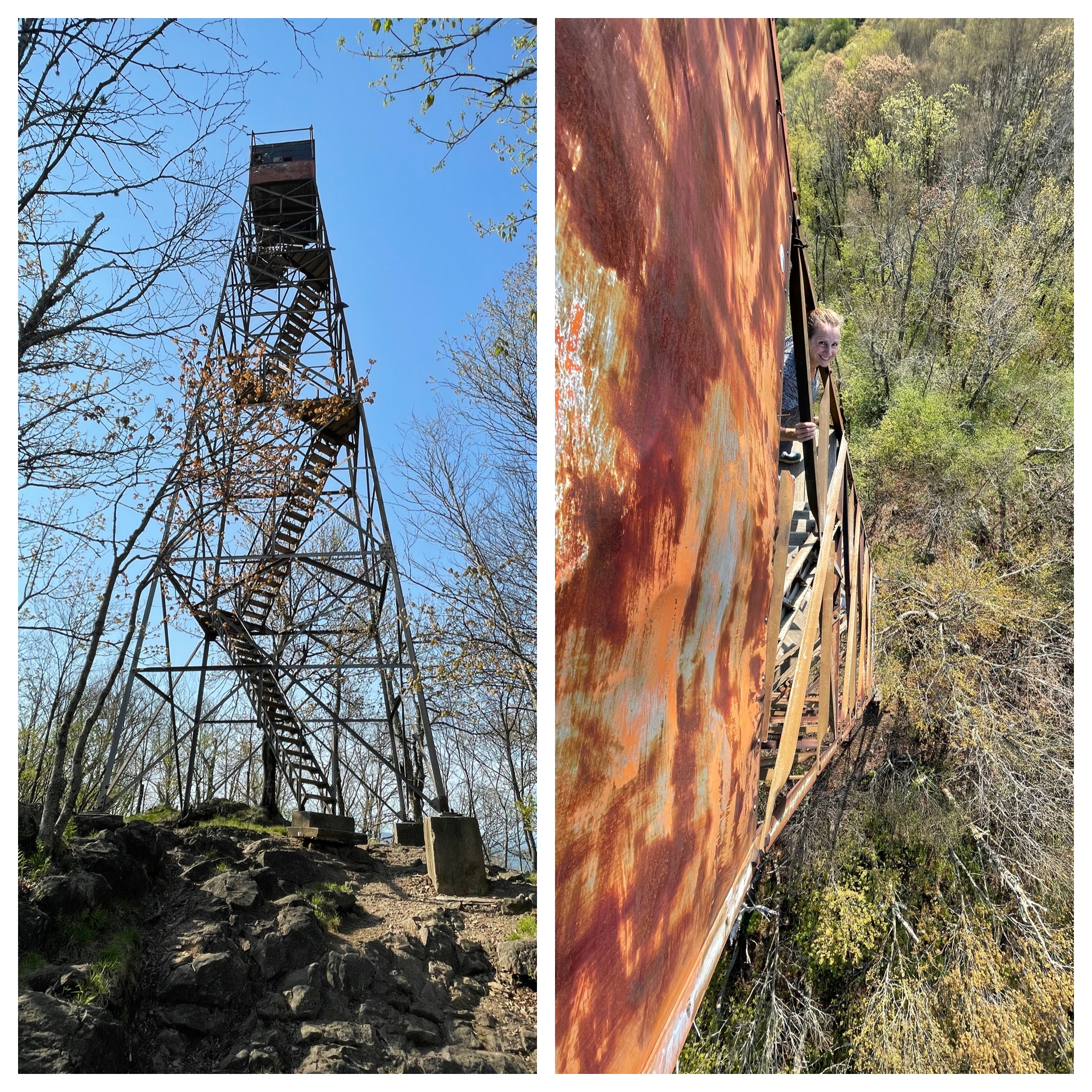 There were also times when I took a photo and wanted to share the grandeur of the moment immediately, rather than waiting until the end of the day. After the long climb out of Fontana to the top of Shuckstack, I took several photos of the crisp, clear mountain scene. The view was stunning from the top of the rickety fire tower!

At that elevation I had a good cell signal for the first time in days, so I texted a photo to my hiking friend Susan. She had lived and hiked in this area several years ago, and I thought she’d really appreciate the view. She soon replied, commenting on the splendor of the mountain scene. 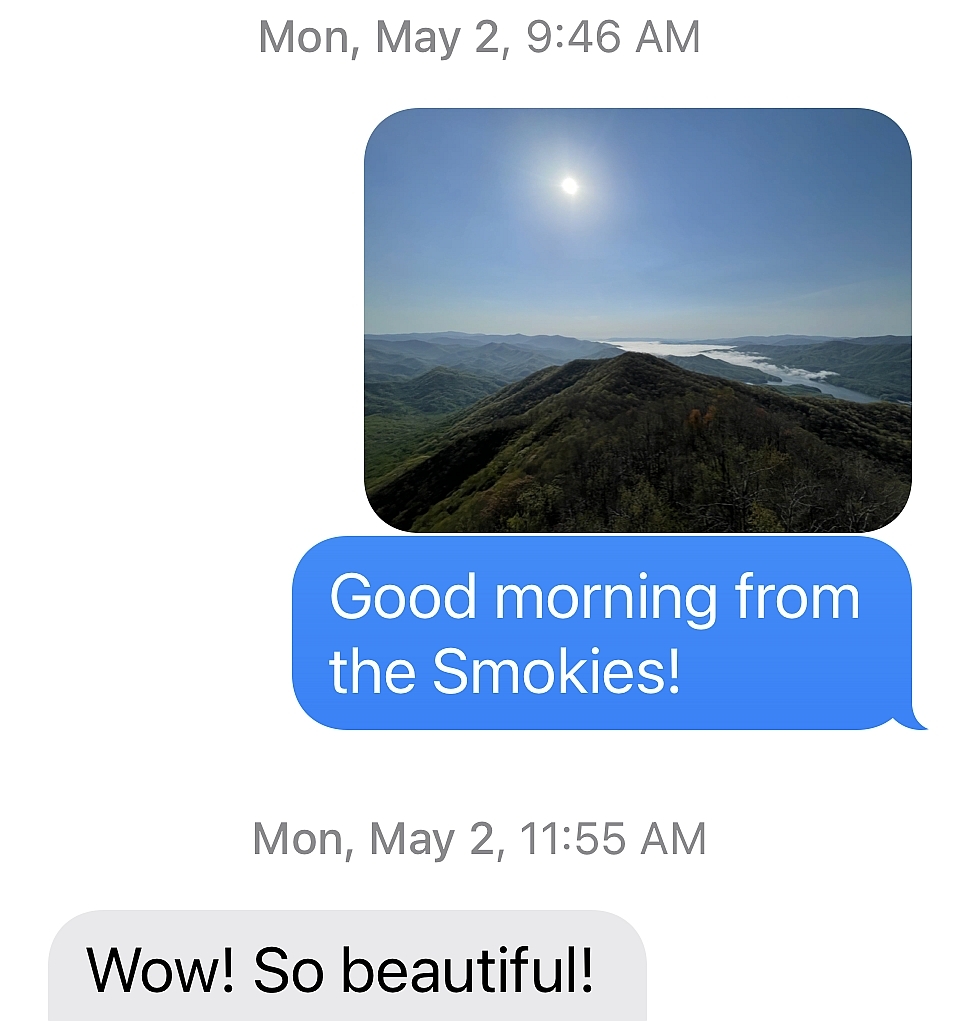 But a short while later she followed up with a second text that included this unsolicited challenge: “Smell the air. Take in the view. On one such beauty stop I challenge you to not take any photos and write about it instead. Off you go” 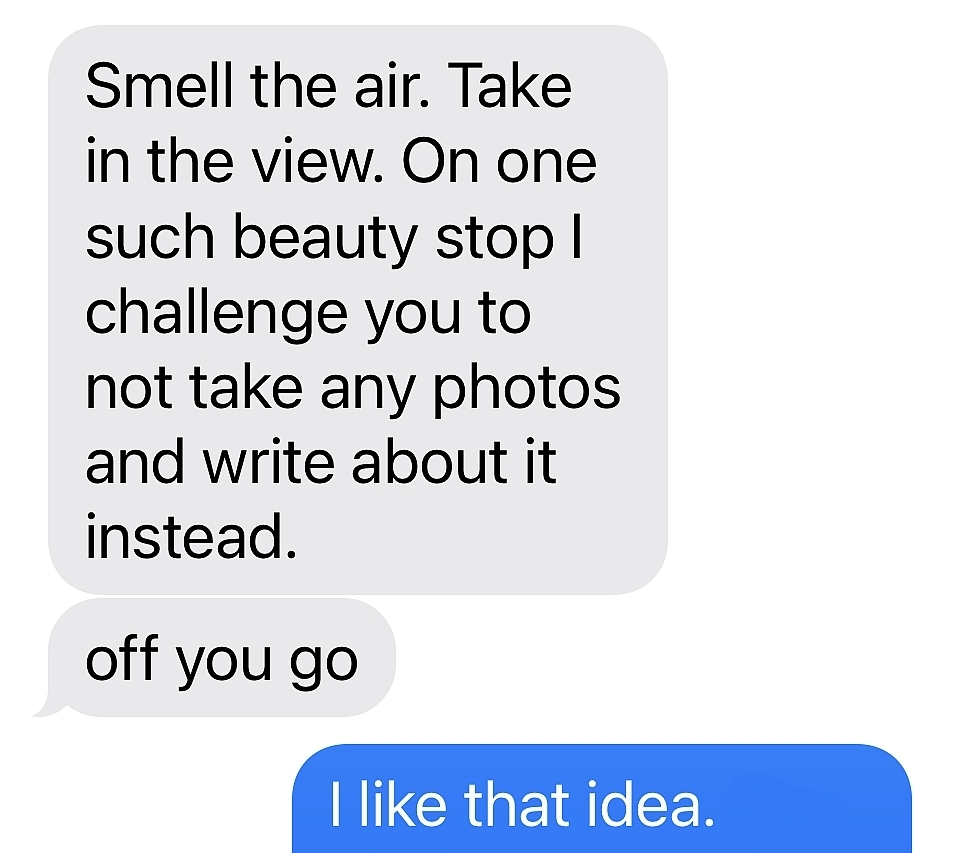 I certainly love a challenge, but not take any photos? This was the perfect time and place to be taking MORE photos. I was in the Smokies, and the weather was perfect. The group I had hiked with the previous week split up and I was now backpacking solo for the remainder of the trip. I had no timetable other than reaching my car at Newfound Gap in a few days. There would be plenty of opportunity to take photos without slowing down a group or scrambling to keep up with them.

But as it turned out, the timing of this challenge proved even better. My legs felt great, but I had some lower back tightness after climbing for several hours that morning. The mental exercise of the challenge took my mind off the discomfort and seemed to power my feet. I cruised along the ridgetop, occasionally stopping to observe. I took notes instead of pictures.

What Iconic Feature Should I Choose ?

What spectacular scene should I write about? What was my favorite?  There were plenty of candidates. A mountain vista? A waterfall? The shroud of blue-gray haze that seemed to emanate from the Smokey Mountains themselves?

As it turned out, my mind kept coming back to the same subject. It wasn’t Siler’s Bald, Rocky Top, or Clingmans Dome, it was the trail that traversed through these iconic features. Yeah, that’s it. I decided to write about the trail itself. 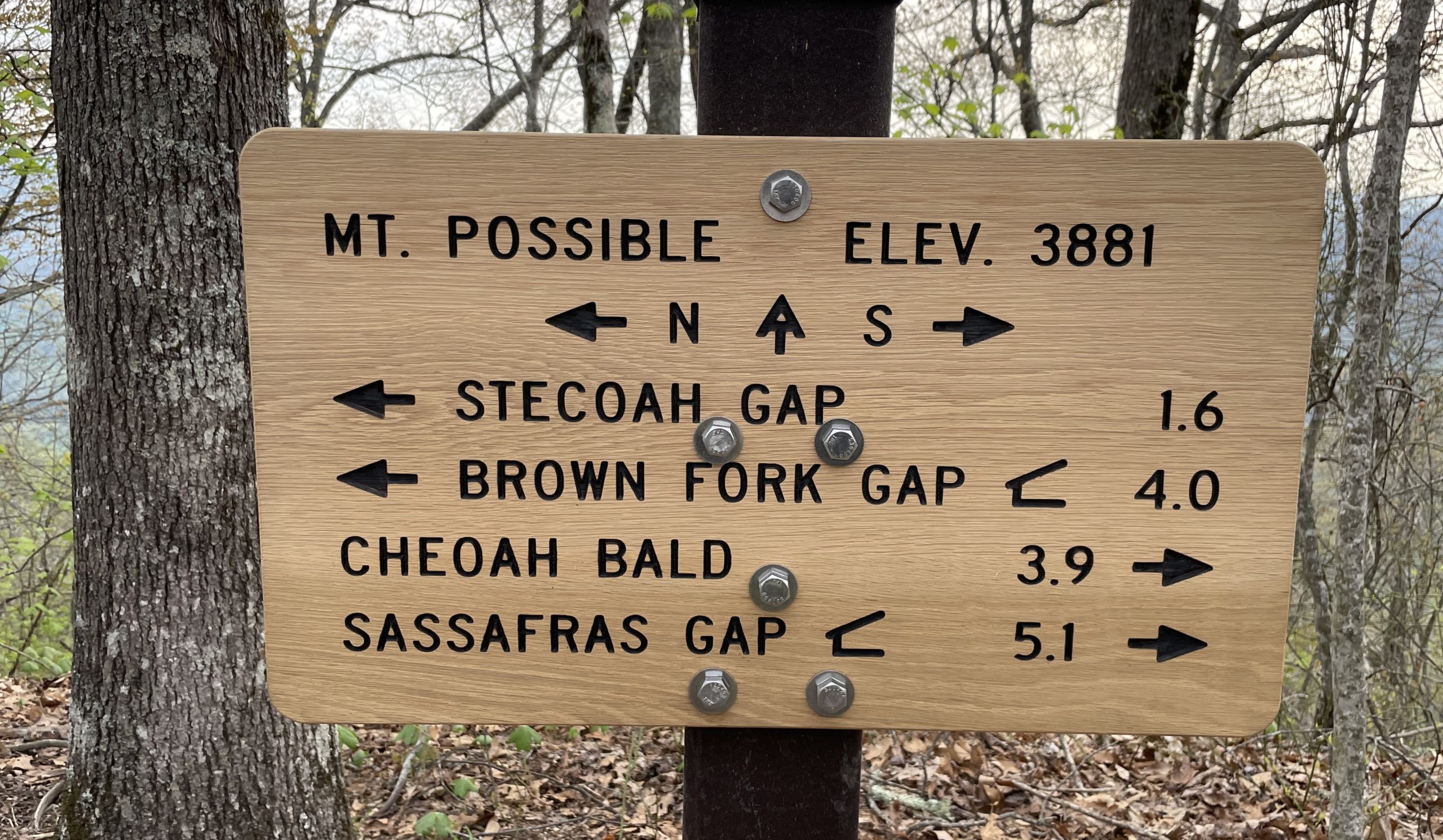 Common trail descriptors including mileage, elevation, and direction. Helpful, but they don’t truly describe the trail.

That choice seemed to add difficulty to the challenge. How do you describe the trail? Where does it go? What’s the distance? Does it go up or down? What compass direction? Guidebooks and hikers typically use numbers to describe a trail, including stats like mileage and elevation.

Sometimes a trail is considered a means of getting from point A to point B. It connects places. As a photographer I often utilize a trail solely to get to locations I’d like to photograph.

But the trail is much more than just the numbers, or a destination. The challenge to describe what the trail truly looks like, or what it means to you, proved that to me. Here are my observations (without photos) from a few days on the Appalachian Trail in North Carolina and Tennessee.

Looking down at my feet, I observed glossy green and black beetles, bear scat, millipedes, roots across the trail mimicking snakes, and the rare snake mimicking a root. Walking sometimes involved careful negotiation of a log hurdle, a jumble of boulders, or a stone staircase. It required squeezing through narrow rock walls, or ducking under fallen trees, each time hoping your pack wouldn’t catch on the obstacles.

One stretch involved traversing a narrow section of trail, brushing up against a dripping, moss-covered rock wall on one side, with a steep drop-off on the other providing an open view across the mountain gap. Navigating here required good balance and  careful attention to each step.

But when you encounter a trail section that allows for a consistent pace and rhythm, you can look up from your feet, direct your gaze further down the path, and truly observe.

The view constantly changed with every step, a different perspective around every corner. Elevation and sun exposure play a big role in the character of the trail. Leaves were beginning to bud on the sun-drenched south sides of a hill, while the branches remained bare on the shaded north side. In a few days that view would surely change.

At times the pathway was dry and arid. At others it was oozing moisture, giving it a dark, dank, almost primeval atmosphere. In the transitional season of early spring, the trail was often a brown ribbon of packed dirt and worn rock snaking through a sea of wildflowers. Navigation was easy when wildflowers lined the trail like runway lights of blue and white.

I was constantly mesmerized by the infinite variations of the color green, including the waves of ferns that seemed to breathe in the breezes rolling down the hollow. Sometimes it was the green tunnels of rhododendron that offered a cool respite from the midday sun, or the lush micro-landscapes where mountain springs intersected the footpath. Lichens looked like pale green paint splatters on rocks and tree trunks. Old Man’s Beard lichen dangled from trailside branches like ornaments.

There was a time or two on the trail when I felt sure I was being watched by a concealed woodland creature – maybe deer, a bear, owl, or coyote. It wasn’t a feeling of dread or creepiness, but just “knowing” I was being observed as I moved along the trail. I was probably viewed as an interloper passing through their world. Somehow that seemed satisfying.

The borders of the trail were fascinating as well. Wildflowers stretched over the edge of the path seeking more sunlight. There were twisted trailside trees that looked like avant-garde sculptures. And an unusual sight that took me a few moments to process: large swaths of rich, dark, earth tilled in a random pattern presumably guided by the snouts of wild boars. It was an impressive sight, but also a great example of a scene that just wouldn’t translate in a photograph. It was better to simply observe and think about how to describe it in words. I was really starting to enjoy this exercise and as a result I’ve never felt more ‘present’ in a place.

After embracing the challenge for a couple of days, it became clear to me that the trail is much more than a pathway through the wilderness. It’s an experience. One that changes constantly and is difficult to capture in words, especially with my limited abilities as an author. My hope is that this verbal snapshot hints at what a truly amazing experience it can be.

Thank you, Susan, for motivating me to step outside my comfort zone and put the camera down. The challenge to “smell the air and take in the view” really opened my eyes… And I think I may actually be a better photographer for it.

Others have undoubtedly expressed this sentiment more eloquently than me, but the trail is a journey unto itself. I feel very much at home there. It’s what draws me back, again, and again.

Time to get walking. I’m ready for my big hike.