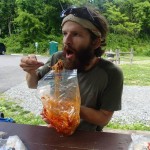 If you spent a week hiking through Shenandoah National Park in northern Virginia and you didn’t see a black bear, odds are good that you were walking with your eyes closed. Shenandoah boasts over a million visitors a year1 and has one of the densest populations of ursus americanus in the country. I did meet some unlucky A.T. hikers who were never in the right place at the right time, but I myself had just shy of a dozen encounters with the noble (or pesky, depending on whom you ask) critter within the bounds of the Park. There was one particular black bear, though, who seemed to take a special dislike to me in particular. 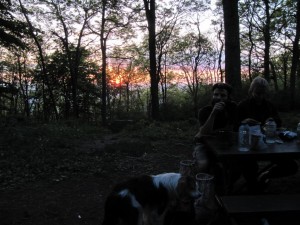 Byrd’s Nest #3 – A lovely shelter but for the cheeky wildlife.

May 26th dawned at Byrd’s Nest Shelter #3 sunny and warm, a blissful reprise of the previous few days’ weather in Shenandoah. We had spent the night chatting away with a large group of section hikers just about to graduate high school and retired to the sounds of wildlife and overwrought teen emotion. Upon waking, I unzipped my tent, rubbed the crust from my eyes, and mosied over to the privy to do what all well-fed hikers do in the morning. As I returned to the vicinity of the shelter and headed back to my tent, there, sitting on its haunches in my half-open vestibule, was a large male black bear. The bear eyed me with a haughty malice, daring me to approach.

The National Park Service has a list of suggestions in the event of a black bear encounter2. I’m not going to say I deliberately ignored these suggestions, but I may have bent a rule or two. I don’t think I need to remind you how rude this bear was being.

Okay, this one is easy, I thought. I’d been running into bears all week, after all, and the result was the same each time. Stand your ground, appear tall, and don’t freak out, and the bear will eventually trundle off in search of less prideful prey. However, my calm at seeing a bear move into my home was matched, perhaps even outmatched, by this bear’s own implacability. He pawed at the ground a bit, circled back and forth as if he was a dog finding the best spot on its bed, and settled back into his vigilant posture. 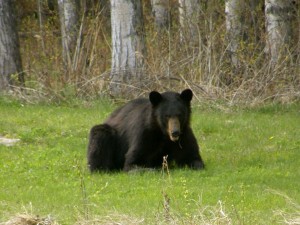 I crossed my arms and stared what I thought was a menacing and very alpha stare at the interloper. The bear just made a curt chuffing noise and eased his behind closer to the door of my tent. Okay, Rule #1 unsuccessful. What’s next?

Rule #2 – Let the bear know you are a human. Talk to it in a normal voice and wave your arms.

Alright, this one I knew I could do. I am fairly confident that I am a human, now to prove it to this disrespectful creature. I waved my arms around, with hesitance at first, unsure of how the bear might react, and then more and more frantically. Some other hikers had awakened by now, and were watching my tribulations with vague amusement. Leave it to the A.T. hiker to be thoroughly unimpressed by my predicament. After all, they’ve seen it all before. After what seemed to be an eternity of well-intentioned arm-waving, I gave up. I’m not sure if bears have eyebrows, but I could be reasonably certain that this bear had raised his own in a gesture of disinterested contempt. It was time to up the game.

“Hey, bear!” I shouted, voice full of confident machismo, “get on outta here!”

“Nah, I actually really like this tent,” the bear seemed to say, unmoved, “how much did you pay for it?” 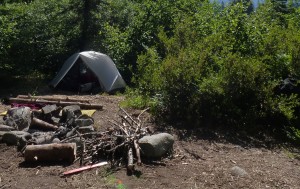 “Hey, bear!” I tried again, “my toothbrush is in there. I need to brush my teeth. Don’t you know how important dental hygiene is to healthy gums and teeth and odor-free breath?”

“But, Bear!” I continued, “have some compassion! We have 25 miles planned today and I really need to get moving or we won’t make the next shelter by nightfall.”

The bear stared at me insolently. These polite entreaties were getting me nowhere. It was time to get personal.

“Hey bear!” I said, “I have a few choice things to say about your mother!”

“My mother is a dynamite lady and a paragon of virtue,” the bear seemed to say, “and there’s nothing you can say to make me think otherwise.”

Clearly, shouting and pleading were ineffective methods of bear removal. It was time to try something else.

Rule #3 – If the bear does not leave the area, move away slowly

Now this is a rule that I quite openly ignored. This bear was occupying my sovereign territory and I would be damned if I would cede my tent and all the precious sentimental gear stashed within to such a brute. I took a few tentative steps from side to side, trying to divine the bear’s intentions as I circled closer to my tent. I picked up a few rocks from the ground and tossed them at nearby bushes and trees, making as much noise as possible. Surely the bear will be startled and chastened by my sudden and cunning sonic attack, I thought. 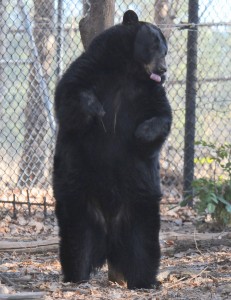 I know he looks cute and funny now, but staring one down at full height is no joke! (Photo courtesy of Flickr).

Startled he was, but chastened he was not. He reared up briefly on his hind legs and then drove his front paws into the dirt with an audible slap. Bear biologists and Shenandoah Park rangers will tell you that this gesture is not as threatening as it may seem, “it is merely a bluff that means the bear feels nervous and apprehensive, but for some reason may be reluctant to leave”3. I had in fact spoken to a park ranger earlier that week who told me that a bear had to be removed from the park recently, because it had grown clever enough to bluff charge hikers like this and frighten them into dropping their packs and running away, at which point it could rummage through their selection of trail mix and candy bars unmolested. A shrewd creature indeed…

For my part, I momentarily forgot this nugget of information when confronted with the stamping feet of the 300 pound behemoth who had usurped my tent, and I was justifiably scared. I backed away a few steps, a signal the bear was sure to interpret as submission and surrender. However, as a last gesture of defiance and strength, I made sure not to break eye contact.

Oops. Maybe this is why the bear was being so disrespectful to me! I had been staring him down the whole time, assuming that a stink eye and a breath of animal confidence could frighten him away. I had glared at him as I berated him, as I slung insults at his mother, and as I willfully tested his patience. Not having access at this time to Shenandoah’s website and all the convenient bear encounter information located therein, I unfortunately continued my staring contest with my ursine opponent, but to no effect. I looked at him pleadingly, he fired back with a countenance of practiced arrogance. I changed my look to one of anger, and his turned to one of delighted amusement. Helen of Troy I am not; there was no moving this bear with the power of my face alone. 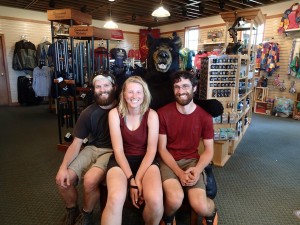 If only all bears in Shenandoah could be as friendly as this one.

I figured at this point that the only way to usher this bear out of my tent and out of my life forever was a complete sensory assault. I didn’t have any bear spray, so an olfactory attack was out of the question. He was unflappable in the face of my dominating gaze, so a visual attack was likewise useless. Lacking a megaphone or a boombox, I slowly retreated backwards toward the shelter to find the next best thing. Keeping an eye on my foe the whole time, I groped around on the shelf inside the Byrd’s Nest for my eating utensils. Brandishing my titanium spork and stainless steel mug, I advanced on the bear again with my improvised sword and shield at the ready.

The spork rang out against my coffee cup, filling the still mountain air with reverberations of sound sure to be menacing to even the most hard-hearted of bears. And indeed it was! My enemy (for whom I had developed a grudging respect by this time) lifted his rump into the air as if my tent had suddenly caught fire and went crashing away into the underbrush. I had successfully liberated my possessions back from mother nature. Now I just had to deal with the rage sure to come from all the other groggy hikers that I had roused with my impromptu cacophony…

Author’s Note: This is a story of an encounter with a black bear habituated to humans, the kind that is especially dangerous to hikers. I got lucky this time, but take the advice from the National Park Service seriously, and cultivate your awareness, especially in Shenandoah!