Inside the Mind of Courtney Dauwalter: The Record-Breaking, Tough-as-a-Tank Ultra Runner

“About 12 miles from the finish, my vision starting blurring from the sides.  It was gradual at first. I thought maybe it was my contacts acting up or my headlamp dying or dust in the air.  With 10 miles to go, the blurring had moved in to the point that it was just pure white.  Everything in front of me was white, I couldn’t see my hand in front of my face.”

This is Courtney Dauwalter in a nutshell.  The above describes her condition at this year’s Run Rabbit Run, a 100-mile trail race in Steamboat Springs, Colo., featuring more than 20,000 feet of elevation gain and loss.  For the last 10 miles of the race, she would have to navigate the trail’s obstacles blindly, continually tripping over rocks and roots.  One of these stumbles proved especially harmful, as she cracked her temple against a rock. “I busted open my head and was bleeding down my face,” Dauwalter says while laughing, downplaying the fall. “It looked really dramatic.”

Despite the injury and blindness, Dauwalter would be the first woman across the finish line, her second RRR100 victory in as many years. 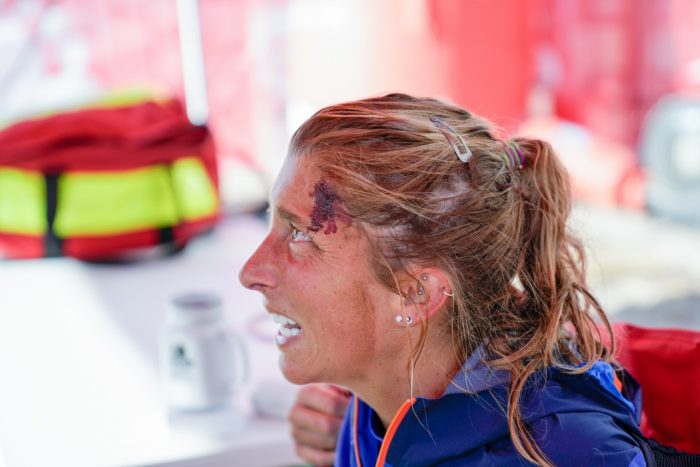 Although the visual impairment was a rare incident for the Golden, Colo., resident, the victory was not.  Despite being a competitive ultrarunner since only 2011, Dauwaulter has racked up a staggering amount of victories and course records. Her win at Run Rabbit Run would be one of six ultrarace victories in 2017, and not even the most notable.

New to the ultrarunning scene in 2017 was the Moab 240, a massive 238-mile loop around Moab and its challenging desert canyon terrain.  The course features nearly 30,000 feet of elevation change and approximately 20 miles between aid stations, a much longer water carry compared to the typical ultra. 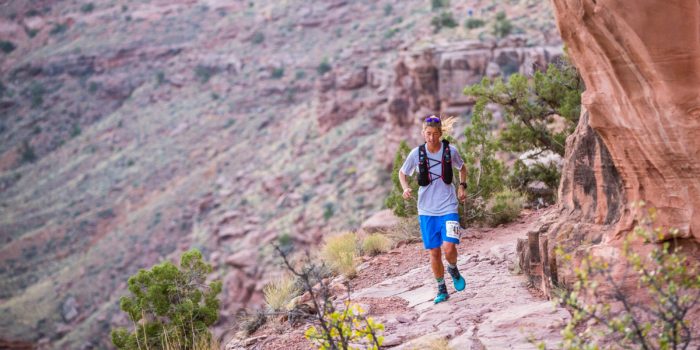 Because Dauwalter’s previous longest trail race was 100 miles, her primary goal was just to finish in the allotted time of 112 hours (a 2.1 mph average).  “I was ready to come in last place if that’s what it took to finish.”

Dauwalter not only won the race outright with a time of just under 58 hours, but did so in staggering fashion, crossing the finish line more than 10 hours faster than the 2nd-place finisher.

Unlike other runners who enter these unusually long races with a detailed sleep schedule, Dauwalter and her crew employed a “no-plan plan.”  This amounted to a total of 21 minutes of sleep over two sessions, featuring a one-minute “nap” near the 200-mile mark.

“I was falling asleep as I was running. My pacer suggested I take a nap on the trail. I immediately face planted into the dirt and fell asleep. He woke me up after one minute, and I was totally refreshed. Amazingly, I achieved a deep, deep sleep during that time.”

That one minute revitalized Dauwalter to the point of feeling refreshed for the remainder of the race, roughly 40 miles. 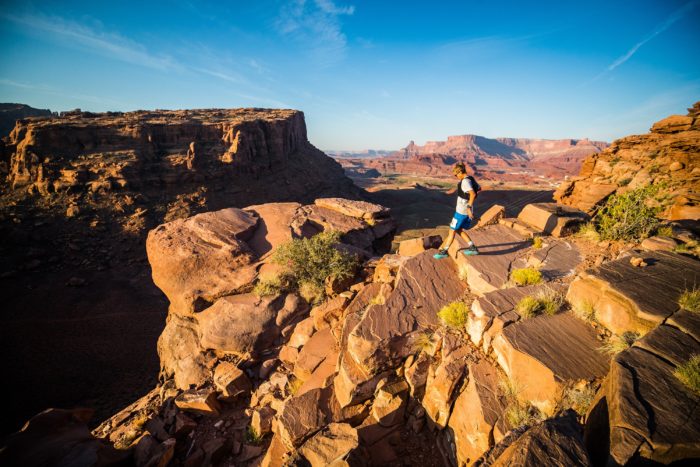 Much like long-distance backpacking, mental toughness proves to be the competitive edge in ultraraces, as Dauwalter can attest. “For me the mental piece is huge. I’m not more physically fit than anybody in these ultra marathons. The physical fitness of these people is incredible. What I’m trying to do is be mentally stronger.”

How exactly does she achieve this?

Although Dauwalter says that mental toughness has always been a quality she’s possessed — manifesting as stubbornness as a child — it’s a trait she’s built upon throughout her ultrarunning career.  Her first attempt at a 100-mile race was also her lone DNF (did not finish).

“I quit at about 60 miles.  I hadn’t figured out the mental aspect of 100-mile races.  It became physically hard, like it always does, and I threw in the towel, thinking that I couldn’t do it.”  When I asked if she was physically capable of finishing that race, she responded with an immediate and definitive, “Yes.”  She also sees that race as a turning point in her career.  “I think quitting that one fed some of my fire… I kick myself for not finishing, but I’m also grateful for it. It’s dominoed into what is happening now.”

When asked what it would take for her to throw in the towel during a race today, since blindness couldn’t do the trick, she pondered the question for a moment.  “Bones sticking out,” she responded with laughter. “Maybe if an animal has me pinned down.”

So the next time you’re feeling down on trail, whether it be from a nasty case of blisters, chafing, or general lethargy, remember Dauwalter.  Remember 21 minutes of sleep during two and a half days of running.  Remember persisting through blindness, while wiping the blood from your eyes.  Remember that quitting is a decision.

Profession: Ultrarunner. Until recently she was an 8th-grade teacher in Denver, Colo.

Nutritional regimen: None. She doesn’t follow any fad diet. Courtney enjoys all food groups, including candy and beer.