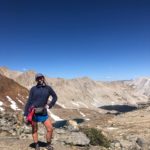 It’s not supposed to be easy 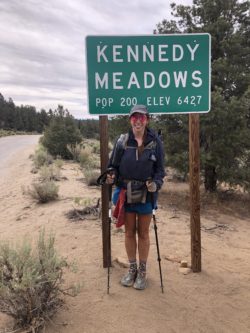 Dirty tears are streaming down my face as I walk up to Kennedy Meadows general store to the applause of other hikers. I see faces I hadn’t seen for weeks, a trail friend rushes forward to hug me and congratulate me on making it through the desert. I had made it. I had walked every single one of the 702 hot, dry miles. I was crying because I was emotional. I was heartbroken to leave the desert I loved so much but also deep down when I’d started the hike I had never truly believed in myself that I would get to this massive milestone. But I’d done it. I hadn’t skipped the section between Tehachapi and Walker Pass despite the fear mongering and rumours flying around that there was toxic algae in one of the water sources. I’d done my own research and weighed up the pros and cons. I’d decided to risk it, reminding myself I have had giardia twice, typhoid once, and climbed Mt Bwahit (Ethiopia) with one of the worst parasites of my life. I could say I trusted my gut with this decision to go forward.

No tent, but lots of water

I’d sent my tent and every single piece of warm clothing I owned apart from my puffy and my sleeping bag to Kennedy Meadows and prepared for a 7 day food carry, packing 8l of water so I could skip the first questionable sources to reduce my chances. The trail wasn’t supposed to be easy. There were supposed to be hard choices and challenges to overcome.

By night one of that section I immediately regretted sending my tent forward as I accidentally slept in an ants nest and woke up with ants swarming my tyvek, my food bag and everything I owned. I spent an hour de -anting and by the time I started hiking the day was already hot. Exhausted I fell asleep for 3 hours under some shady pines and realised that my already dwindling 8l of water would not last me until the first water cache. I decided to fill up at Robin Creek Spring but I would have to make it there that night. It was hot and forcing myself to ration the little water I had left sent my mind spiralling, desperately dry mouthed, even though there was no chance I could be dehydrated. 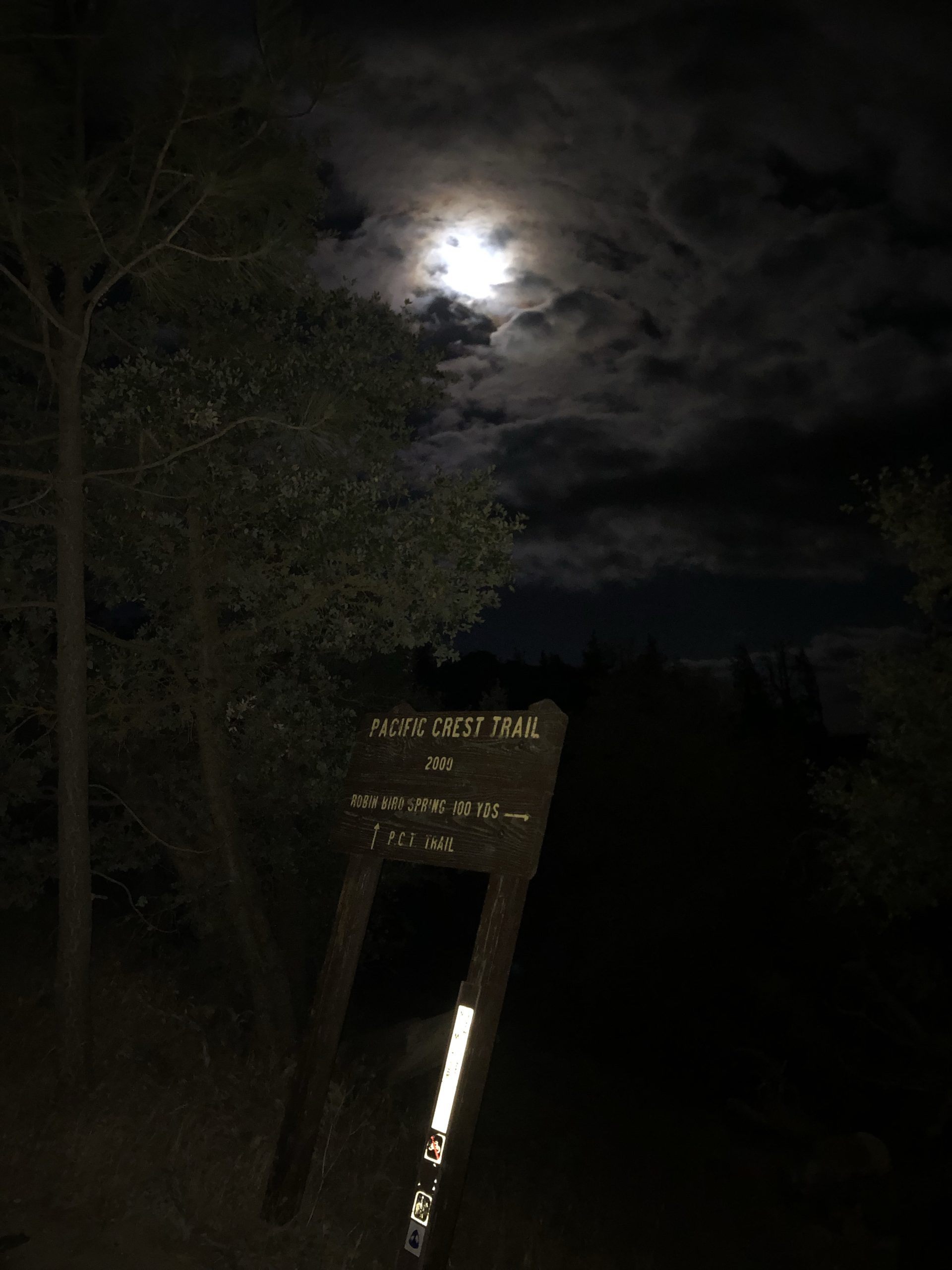 It was close to 10pm by the time I arrived at the spring. I had night hiked under the full moon and the dim light of my iPhone 8 as I’d discovered my head torch had gone flat in my pack. I’d stumbled along the trail anxious aboutthe clouds, the risk of bears and everything else as my imagination played tricks at me. I had to camp at the spring that night as it was late and I was exhausted from 25 miles. I had seen nobody all day as most hikers had chosen to skip this section.

Relief in the form of other hikers

At the spring I heard voices even though it was late and I saw Chaos Muppet and Moo who invited me to camp with them. The relief of familiar faces who were also risking this crazy section washed over me. It took me almost an hour to filter 4l of water from the spring, first though a bandana, then my sawyer and then I spontaneously put 3-4 aqua tabs per litre for luck. Moo had seen 3 cows standing in the spring and we couldn’t help wondering if this was the source which was making hikers sick.

The water was barely stomach-able from the taste of chlorine and all the food I cooked tasted terrible from the tablets but I was hydrated and ironically as a result from the amount of chlorine, it seemed to kill what ever had been making my stomach bad for the previous few weeks.

That night I fell asleep on my tyvek, restless under the full moon, which every time I turned over I would check I could still see as I’d been worried about the clouds. I felt the first drop of rain at 2.15am and I winced. It hadn’t rained on trail in the entire 40 something days. Surely, surely when I didn’t have a shelter would it rain. I started to pack up camp at 2.30, not able to risk my down sleeping bag getting wet. I managed to hike about 5 miles and realised I had been stupidly unlucky sleeping in the only cloud I’d seen in 5 weeks. By 7am extreme fatigue became over my body and I could hardly place one foot in front of the other. I spotted a beautiful flat spot on a bed of pine needles and took my sleeping bag and pillow out of my bag and slept until late morning. It felt like I fell asleep in a fairytale and I dreamt that a bear licked my cheek.

At this point It is probably time to address the fact that I do not have a trail family. I do however have trail friends, lots of them, all incredible people. When I started the trail I was keen to have my own experience and not feel restricted or influenced by the decisions and opinions of others. I came out here for the ultimate freedom of solitude and to find peace and a sense of belonging in nature and I have been hiking mostly alone. I love meeting and seeing my friends on trail, in town and I find that when I do see others on the trail it is a more special, meaningful experience. I am more grateful and appreciate the company more.

Choosing to not have a trail family led me to go into the High Sierras alone. It was a rocky start when I realised 5 miles after leaving Kennedy Meadows that my water filter had frozen the night before . I made the quick decision to walk back out to buy a new one. I’d left in a rush and felt a little unprepared. I went over everything I knew in my mind about altitude. All I could think of was water takes longer to boil, add an extra egg to cake mix and drink a lot of water to put oxygen into the blood. With a new filter and the vast quantities of rivers, ponds, lakes and trickles of snow melt, drinking water has not been an issue and thankfully at this stage I have not felt the affects of altitude.

I had been in the Sierras for only a couple of days, when I bumped into another hiker I vaguely knew who asked me if I’d heard about the storm that was about to hit the Whitney region the next day. I hadn’t. The weather forecast I get on my garmin I have since learnt is inaccurate. Cloudy and sunny is not a storm. I sent out a message to my friend Toots to ask her to get me an accurate forecast and when she confirmed that a storm is indeed coming the following morning I was faced with a tough decision. I hadn’t planned on getting to Bishop for another 3 days but I realised I would need to skip Mt Whitney and push on to cross Forester Pass before the storm would hit. I felt very alone, my trail friends were either a day or two ahead or behind and for the first time I wondered if I had been stupid going into the Sierras alone. I longed to talk it over with someone, but I hadn’t seen any other hikers since hearing the news of the storm and all I could do was keep going forward. I was crying at around mile 767 when I met FireFly. His words soothed me as he told me I was exactly where I was supposed to be, that the universe was guiding me and reminded me to be present in the beauty of what was around us. I asked him ‘Am I stupid going into the Sierras alone?’ And he told me I wasn’t, that I was in the right place and I was strong and capable and that this was my hike, and my experience and again, that I was in the right place.

His words gave me renewed courage and as I walked another 10 miles with the sun setting and the moon rising around me and the views from Big Horn Plateau made me feel alive. I no longer feared the night, and instead of being scared of bears I longed to see one. 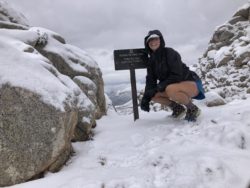 I slept  few hours that night and I would later be walking to see the sun rising to reveal the dark thunderous clouds circling Whitney. Lightening flashed in the mountains behind me as snow started to fall as I climbed higher and higher up to Forester Pass. I barely stopped to catch my breath and question whether this was the right choice. It was a race against time. In that moment I did feel strong and capable. FireFlys words that the universe was guiding me. The trail wasn’t supposed to be easy. As I stood on top of the pass alone and the snow clouds gave way to reveal the most beautiful view I realised that this was the true adventure I had been craving all along. The snow reminded me of the mountains I’d lived in in France. The whiteouts I’ve skied in. The snowy mountain in Wales my sister had taken me up. I felt like I’d been preparing my whole life for this trail, this moment and that as FireFly said, I was exactly where I was supposed to be.