The town of Kearny has a reputation for being one of the friendliest “Gateway Communities” on the Arizona Trail. In my opinion, its reputation is well deserved. I didn’t have to wait for long beside Highway 177 before a local resident (thanks, Frank!) stopped to give me a ride. He dropped me off outside “Norm’s Hometown Grocery,” where I wished him well, then bolted inside to look for some fresh food. I made a beeline for the bakery section, where an employee who was stocking shelves spotted (and probably smelled) that I was a hiker. She informed me that thru-hikers could claim a free donut and coffee.

I don’t drink coffee, but I did select a donut. Also a sandwich and a chocolate bar. Surveying the drinks in the refrigerator, I noticed that Mountain Dew had come out with a new flavor. I wondered if maybe I’d lost track of time. How long had I actually been absent from the real world? What else had I missed? I may not be a coffee drinker, but I do have a Mountain Dew habit. I grabbed a can, paid for everything, and sat at a table outside.

As I ate, another local resident stopped by to apologize. Apparently, she’d driven past me while I was trying to hitch a ride, and she still felt bad about it. She explained that she’d promised her husband she wouldn’t stop for hitchhikers. I assured her she’d made the right decision: it was more than two weeks since I’d showered.

For the rest of the day, I followed the Gila River as it carved its way west, past the lowest point on the Arizona Trail. Where the AZT turns north, I stopped and made camp. The Gila River definitely falls into the category of “too thin to plow, too thick to drink.” I had to backflush my filter once per liter, and the filtered water still had a strong hint of “cow” to it.

The next morning, I completed most of the 2000-foot ascent from the Gila River before the sun climbed too high. I didn’t have any expectations about the scenery on this section of trail, so I was surprised by just how rugged and beautiful it was. Nearing the top, I turned around to look to the southwest and accidentally blurted out my appreciation. “F*ck me, that’s a view.” 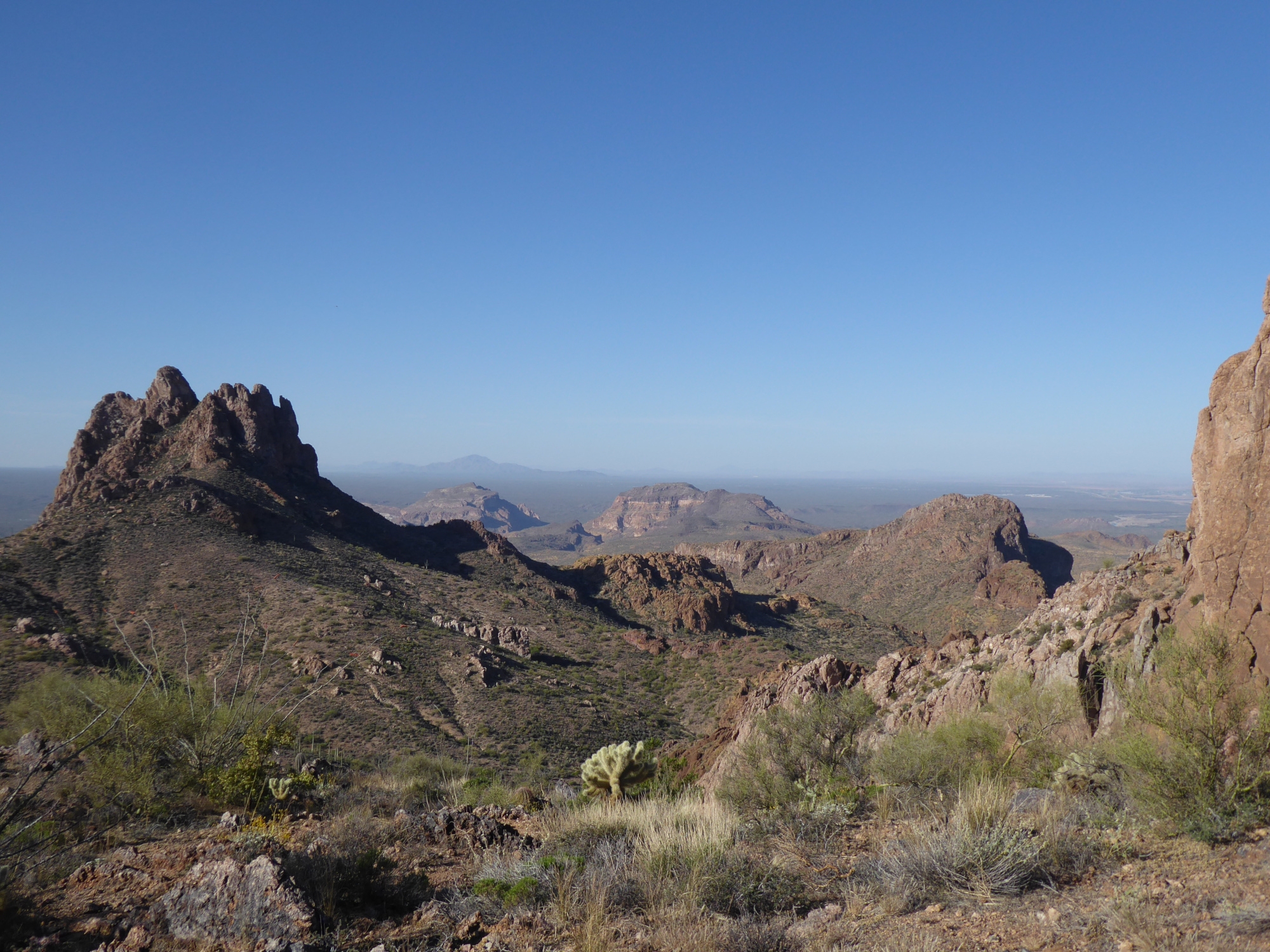 Looking back towards the southwest.

I wouldn’t normally waste water, but having arrived at the AZT rainwater collector, I dumped the filtered Gila River I was still carrying. The collector was designed by the Arizona Trail Association, and it’s one of the clearest, best-tasting water sources on the AZT. It’s not the only rain collector on the Arizona Trail though. There were several others that I subsequently filled up at, but each of those was installed with wildlife, not hikers, in mind.

At one such “wildlife tank,” I met a Sheriff’s Deputy who was checking the water level. I asked him why these tanks had been installed, and he told me that the southwest is much drier now than it used to be. At first, I thought maybe this was a tacit governmental admission about who’s responsible for climate change. Now I realize it’s probably just about money. If the wildlife moves on to greener pastures, hunting revenue will drop. So thank you AZTA, for this particular rainwater collector. And my thanks to hunters, who probably paid for the rest.

Back when I lived in Chandler, I rarely ventured into the Superstition Mountains during the summer. Usually, I’d go during the cooler months, and even then, I’d stick to the western end of the range. As I approached Highway 60, the unmistakable outline of the Superstitions came into view in the pre-dawn sky. I’m pretty sure the pointy silhouette I could see to the west was Weaver’s Needle. The first rays of sun were beginning to strike the high, fluffy clouds, which glowed pink on top and purple underneath. I was excited to be back.

The AZT cuts through the eastern end of the mountain range, so I was exploring new territory. The thin layer of cloud lowered the temperature by a few degrees until the skies cleared mid-morning. Then, a breeze picked up, which cooled me down during the afternoon’s steep climb. Less than a mile from where I intended to camp, I passed the Rogers Trough Trailhead. I chatted with a group of off-roaders who’d driven their pickup trucks up the (extremely rough) dirt road. I explained what the AZT was and that this was peak thru-hiking season. They asked if I needed anything. Equal parts trail magic and shameless scavenging, I walked away with an apple, an orange, a banana, and three tangerines. 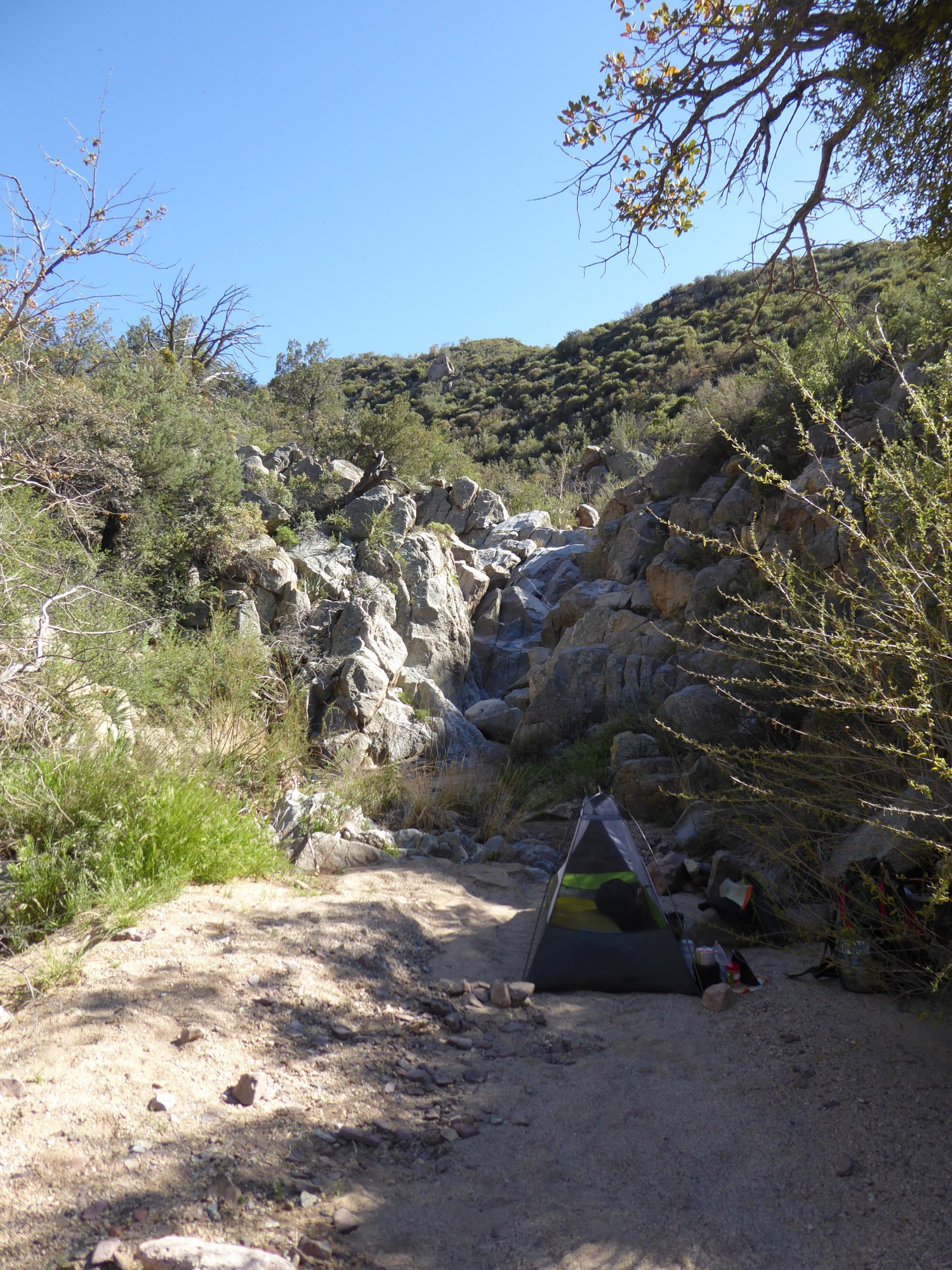 Camping in the dry wash of Rogers Creek.

The next day, I discovered the highlight of the Superstition Mountains. The Reavis Ranch area is a mix of meadows and lush, deciduous woodland. There are plenty of water sources, and it’s a different world in comparison to the surrounding desert. Too soon though, I left the trees behind and re-entered a familiar, parched landscape.

After a couple of big ups-and-downs beneath a once-again blazing sun, I was stopped in my tracks by a monster. A Gila monster. It was slow to react, but then it started “running” down the trail away from me. Its maximum speed was about two miles per hour, so I had to slow down and wait for it to realize it wasn’t escaping. Eventually, it turned right and disappeared among the spiky vegetation. That afternoon, I decided I should start giving trail names to the creatures I encountered.

I finally finished the descent to Cottonwood Spring and started looking for a place to camp. While filtering water, I was startled by movement nearby. A brown bull and black cow, surprisingly stealthy for such large animals, had come to investigate who I was and what I was doing. I guessed they’d escaped from the herd I passed about a mile earlier. “Clyde” soon lost interest and wandered farther down the trail. “Bonnie” was quickly distracted by the thick green plant life growing along the stream. She kept a watchful eye on me while working her way in my direction, demolishing anything edible as she went.

I finished filtering and stood up to put everything back in my pack. Bonnie raised her head and looked in my direction, her lower jaw rotating rhythmically as she chewed. Then, maintaining eye contact the entire time, she lifted her tail and urinated directly into the stream. I was tempted to give her a lecture about leave-no-trace principles. Instead, I sighed and continued downstream to look for a campsite. 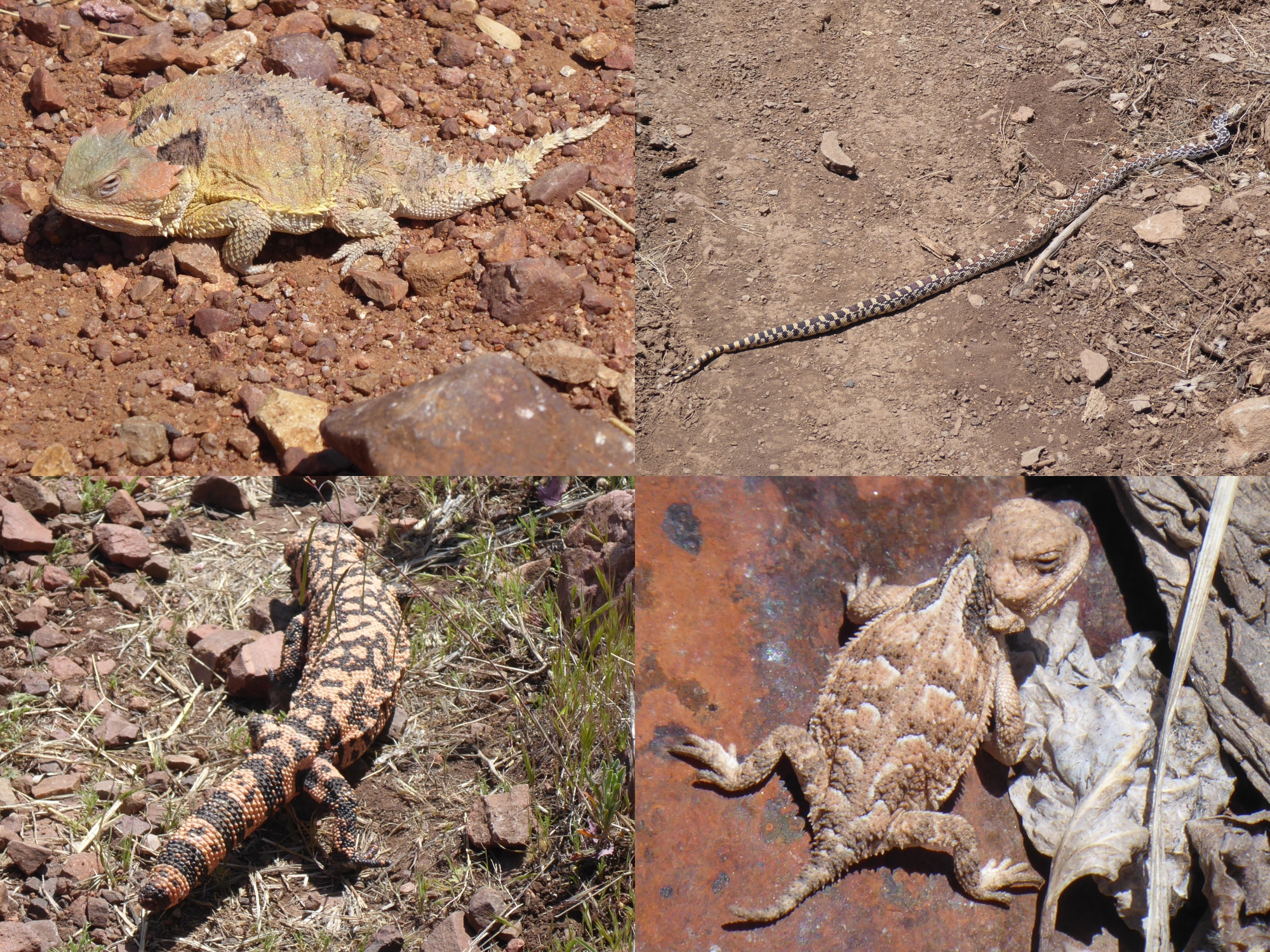 Not long after sunset, Bonnie and Clyde appeared again, then lay down about 20 feet from my tent. They spent the next 15 minutes quietly shuffling, snuffling, snorting, and fidgeting. I was fast asleep before they settled completely.

Stealthy as ever, they’d disappeared by the time I woke up. Mid-nineties temperatures were in the forecast, so I wasted no time getting started, and even less time hiking downhill. I arrived at Roosevelt Lake just before 7:30 a.m. and immediately took care of business. I used the toilet, disposed of my trash, filled up on water, and took some snacks from the hiker box. Then I chatted to “Scurvy” and “Christmas Chili” while we waited for the store to open. I bought a Snickers ice cream and a bottle of Mountain Dew. I could quit if I had to. No, really, I could.

Rather than return immediately to the (rocky) AZT, I walked along the highway until just beyond the Roosevelt Lake Bridge. After rejoining the trail at the Vineyard Trailhead, I started the climb that would take the rest of the day.

Almost four miles later, I took what should have been a quick detour to a rain collector. I needed enough water to last me until the following morning. The wildlife tank wasn’t far from the trail, but the contents of its trough were thick with algae, and I was using a Sawyer Mini. With no shade, I did my best to minimize my sun exposure while slowly filtering six liters of chunky water.

I turned my back to the midday sun, leaned my backpack against the backs of my legs, and made sure my neck was covered. I straightened my arms in front of me to shade them, while awkwardly juggling my filtering paraphernalia. It took a long time, a lot of patience, and several backflushes. (Each backflush was very satisfying – like the first snot-rocket of the day.) I was tempted to take slightly less water than I needed, but then common sense prevailed. That afternoon, I drank more than half of my supply during the hike up Four Peaks.

It was probably the hottest, steepest, slowest, least shaded, and most uncomfortable climb I did on the AZT. And yet the hours passed quickly. My brain spent most of the time in power-saving mode, so I was rarely bored. Every so often, my mind would go through its boot sequence, I’d remove my backpack, refill my water bottle, load up and set off again.

During one of the reboots, I wondered why the people who’d built the trail hadn’t used more switchbacks. Here’s what I concluded. 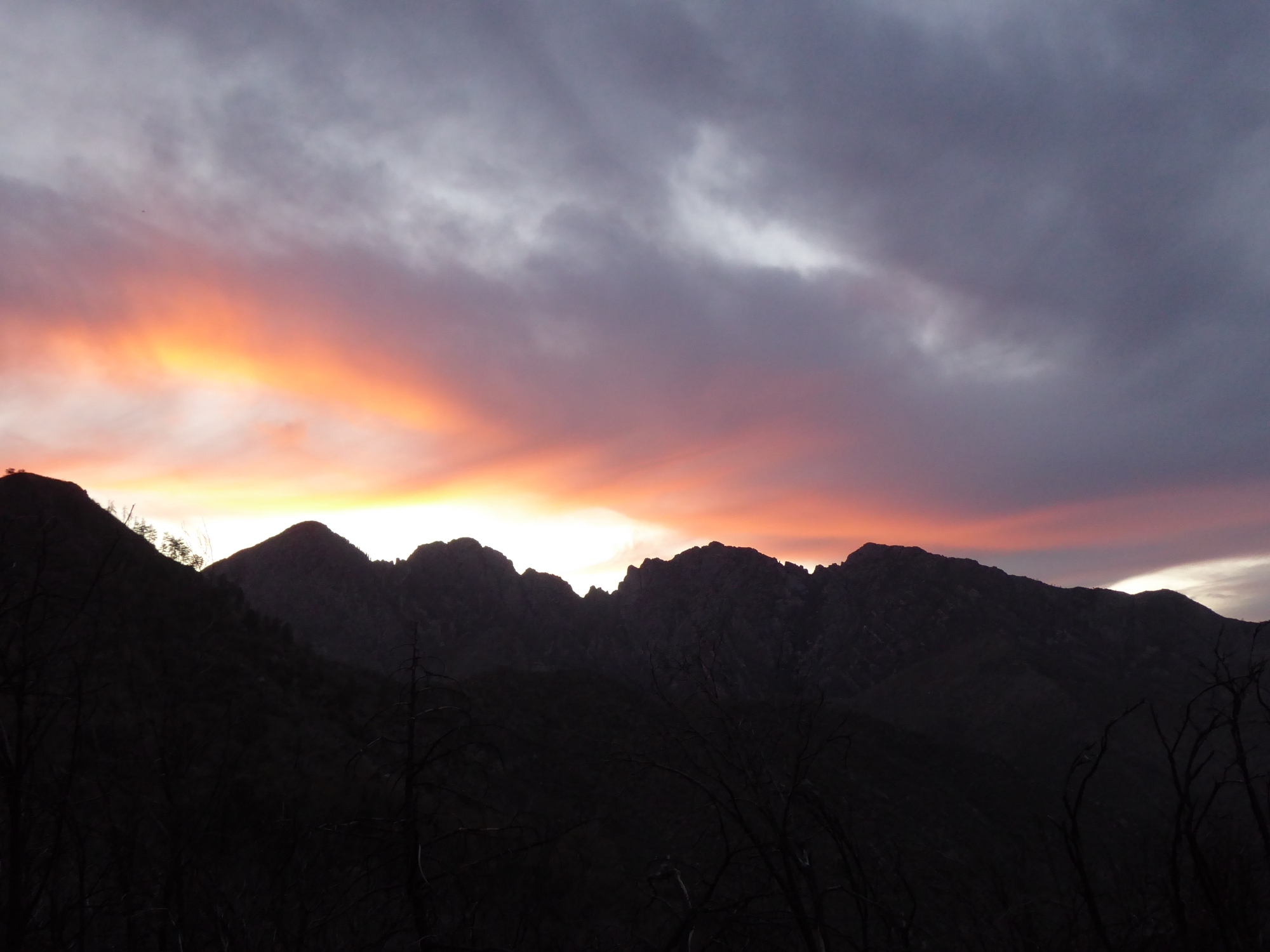 Sunset from my campsite below Four Peaks.