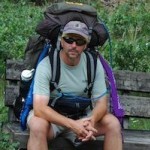 Leave No Trace and AT Campsite Design

There are seven principles to the Leave No Trace Wilderness Ethic.  I won’t detail each of them here as they are more than sufficiently covered in a google search if you are interested, but here is a good link that summarizes them fairly succinctly.  (https://lnt.org/learn/7-principles)  As an overall policy I think the principles are very important and should be taught to all who use the outdoors.  However, when concentrated impact camping (lot’s of people using the same campsites night after night after night) meets Leave No Trace policies, we can end up with some very illogical results.  It is these illogical results which cause campers to look at Leave No Trace and reject aspects of it, especially if they are lectured by some of the more zealous advocates of the Leave No Trace principles.

Recently I hiked through the Smoky Mountain National Park along the Appalachian Trail.  We ran into a ridge runner there that was very much a proponent of the Leave No Trace policies.  This, in itself, is fantastic.  I am a huge proponent of attempting to educate the users of our outdoor spaces in proper camping techniques.  However, in her zeal to sell Leave No Trace, she left many of us scratching our heads about how the policies translate from theory to practical application.  I’ll give four examples and then explain why the Boy Scouts of America’s High Adventure Base at Philmont Scout Ranch in New Mexico does concentrated impact camping correctly and why the Appalachian Trail Conservancy or the National Park Service might want to send a contingent out to Philmont to see what they are doing.

Everyone is required to sleep in the shelters when in the Smokies, this includes the thru-hikers.  However, if the shelters are full of registered hikers, then a thru-hiker can setup their tent on one of the designated tent sites around the shelter.  In most cases the designated tent sites are nothing more than a completely bare piece of ground, a dirt pad.  If this is the case, and the ground all around the shelter is already dirt, it seems illogical to me to say you must sleep in the shelter and that by doing so you are preserving nature.  You cannot honestly tell me with a straight face that my setting up my tent on a completely barren piece of land near the shelter is going to cause any significant additional impact to that area.  That area has already been impacted to near 100%…it is a bare piece of ground.

That being said, I do wish to state that this policy is working to some degree as the areas around the shelter that were not designated tent sites (a barren piece of land) were lush and green whereas at many of the shelters in Georgia, North Carolina and Tennessee prior to the Smokies the entire area around the shelter was barren.  I believe this was because there were not designated areas to setup a tent and over a period of time campers had setup tents everywhere around the shelter thus killing any vegetation that was growing there.  However, I do think the policy can be overhauled for the better if better campsite design policies were in place. 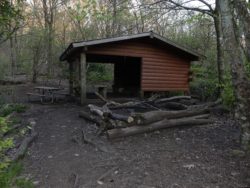 For the most part along the AT, everyone cooks at the shelter.  The way the shelters are constructed encourages cooking and socializing at the shelter.  There are shelves in front with seating that make a perfect spot to setup the stove and do your cooking.  Sometimes there is a picnic table present.  This means that there will be food odors and remnants around the shelter area, which is not ideal from the standpoint of attracting wildlife.  I even saw a triple-crown hiker spill remnants of macaroni and cheese around her cook area at a shelter and she just left them there.  Not exactly the best practice and something that I would not anticipate seeing from a triple-crown hiker.

I have heard this before and will continue to hear it I am sure, but part of leave no trace is that you should swallow your toothpaste every time your brush your teeth.  I can see this from a standpoint of you don’t want deposits of toothpaste all over the campsite.  It can be unsightly and it can attract animals due to the smell of the toothpaste.  However, this is simply not something most are going to do and you need to have a better solution to the issue.  The best solution is the one that Philmont uses as detailed below, but there are at least two others that would work as well.  One, tell people to dig a small hole, spit the toothpaste into that hole and cover.  Two, tell people to go 200 feet from camp, and when ready to spit take a large amount of water into your mouth, swish it around and the broadcast spit it out in an arc so that it is not concentrated in one area.  Give a solution that most are willing to do, not one that they are not willing to do.

The other thing the Smokies had at a few shelters were “toilet areas” instead of a privy.  These were the most disgusting things I have ever seen.  They were basically an area where they wanted the concentrated impact of having to do your business.  In theory, I guess that makes some degree of sense.  In practicality, what you have is a field of Charmin flowers and everywhere you try to dig a hole you are unearthing someone’s previous experience.  To get to and from the designated area, you are walking through a concentrated area of everyone’s previous experience and who knows what nastiness is being transferred to your shoes/boots that is now brought into the shelter and potentially spread to the other occupants through cross contamination.  I wonder how many outbreaks of norovirus have started from these fields of poo.  These need to be discontinued immediately and privies put in place.

Philmont has adopted and put in place through campsite design and setup a system that keeps in place the principles of Leave No Trace as applied to concentrated impact camping.  In describing this, what needs to be understood is that they have taken the basic campsite setup and designed it with the Leave No Trace principles as the guide.  In doing so they have eliminated many of the design defects that exist at the AT shelter system, defects which by themselves encourage the campers to violate Leave No Trace policies.

The basic theory is that you have three aspects of camp that will create smells and potentially attract animals.  Philmont calls this area the “Bearmuda Triangle.”  The first is the bear cables or bear bag area.  This is where you hang your “smellables” (food and anything else that has an odor to it) in camp.  Depending upon where you are on the AT, some sites have bear cables, some bear boxes and some nothing at all and you have to hang your own bear bag.  To the extent possible bear boxes or bear cables should be in each camp and placed such as they form one apex of the triangle.  The second area is the fire pit.  It is assumed that most cooking will take place at or near the fire pit and therefore this area becomes a concentrated area of smells.  This is what the ridge runner was attempting to accomplish with us that night in the shelter, however, given that campers setup camp right next to that area later that night, she failed in attempting to achieve what she wanted and left the rest of us scratching our heads at the application of the policy.  The AT should have an area that is the designated cooking campfire pit.  There may or may not be individual fire pits at individual tent sites, but there should be a designated cooking pit.  The third is something that is not available on the AT, but should be considered, a sump area.  This is basically a plastic plumbing pipe that is buried in the ground with a screened receptacle on top.  This is where you do your dishes, brush your teeth and spit the toothpaste into the sump, etc.  This concentrates the detergents and odors into one area.  These three areas are setup in such a manner that they create a triangle when viewed from above.  The tent area is nowhere near this area and is a designated area in itself so that you do not have campers setting up tents all over the campground creating barren ground everywhere.  There should be specific designated sites and a site map showing the campsite area.  Finally, they have privies available at almost all camps, and where they are not available they do not designate a specific area, but instead follow the traditional rule of 200 feet from camp, water sources and the trail. 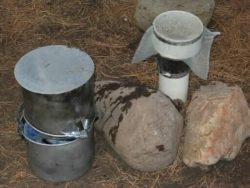 In discussion with the ridge runner about numbers of hikers that come through the Smokies, in particular the “bubble” of AT thru-hikers that occurs from early to mid-March through the middle of April, I suggested perhaps the solution is to setup designated campsites that are only for thru-hikers.  This way the major impact is concentrated to a particular area at a particular time of year.  Her response was that such a system would not only be used by thru-hikers and that instead the AT should be regulated through a registration system.  This is a typical response from someone that does not understand the application of Leave No Trace principles and concentrated impact camping.  The solution is always to limit the numbers.

I disagree that the solution is registration of hikers, but instead I think the solution to the impact caused by all who use the AT and the Smokies is better campsite design and education of how to effectuate concentrated impact camping.  The lack of attention to campsite design is significantly part of the problem.  Each shelter and campsite should be redesigned with the application of the “Bearmuda Triangle” theory and education in the form of a campsite map and reasons for the construction should be posted at the entrance to each site.  This will take time and effort, but in the end would better educate the users and would better match Leave No Trace with the concentrated impact that is the AT.

I am a class of 2017 Appalachian Trail thru hiker. My background in camping, hiking and backpacking is through scouts. As a youth I spent five summers backpacking in the mountains of New Mexico at Philmont Scout Ranch, two of which were spent teaching others how to do so as a Ranger. As an adult I have continued my love of the outdoors, and have been back to Philmont four times as an adult leader and have led two groups for week long adventures to Isle Royale. It will be amazing to see some of the changes that take place in others on the trail, but I am especially interested to see what I can learn from the trail. The longest I have ever been out at one time is three weeks, and that was over 30 years ago. Hopefully I can convince my wife, Leslie, to write a couple of blog posts about what it is like for those that are left behind as we pursue our dreams of a thru hike. Happy trails......