FastestKnownTime.com, curator of worldwide speed records, has published a list of the year’s top achievements—known as the Fastest Known Time of The Year, or FKTOY—each year since 2017. In order to earn top honors, records are nominated and voted on by a select number of experienced athletes (~50). When the votes are tallied, the top ten list is published in full. Podcast interviews are released with the upper five winners spread out over a period of three weeks. For a primer on the how and why of FKTs, check out this article.

In 2021, the annual FKTOY award went global for the first time. In past years, FKTOYs have been awarded separately for North America and Europe, but this year, it was a single showdown amongst all competitors.

What was also unusual about the year’s nominees was the number of those that received awards for records on long trails. 2021 saw some massive efforts from big-name athletes on well-known trails such as Timothy Olsen on the Pacific Crest Trail, Joe McConaughy on the Arizona Trail, Michaela Osler on the Long Trail, and Nika Meyers on the Colorado Trail. Though some of these trails often make the nominations list, the number of winning efforts (and attempts in general) on them in 2021 was exceptional.

In an article early last year, I predicted that 2021 would be the year of the FKT based on the continued cancellation of formal races and thru-hikes due to COVID-19. While the number of approved FKTs in 2021 (3,606) far surpass numbers from 2019, they pale in comparison to 2020’s staggering number of 4,704. 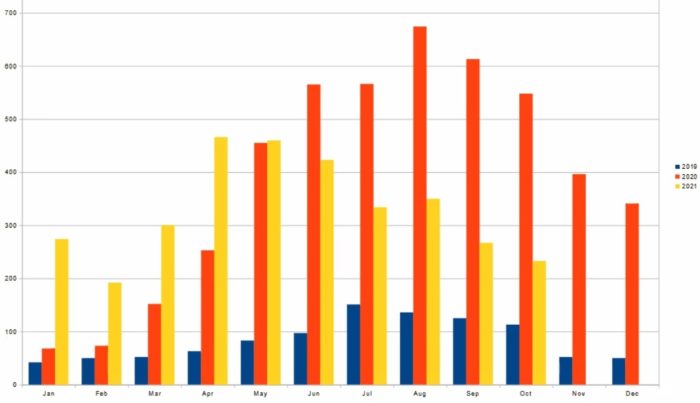 Though the pandemic is still ongoing, many races have resumed operation—yet FKT approvals are still double what they were pre-COVID. This trend clearly shows that athletes have taken a liking to the challenges that speed records present and are now incorporating them into their calendars instead of being an afterthought.

Indeed, FKTs on major routes such as the PCT tend to receive a much higher level of media coverage than placing on the podium of a race. Not only are athletes discovering new variety and creativity within their sport, but they may profit from new or continued sponsorships based on the visibility afforded by FKTs.

With that being said, here are the 2021 FKTOY Winners.

Photo by FastestKnownTime.com & the athletes.

The overall Women’s winner was Nika Meyers of Aspen, Colorado, for her 9d 14h 19m record on the Colorado Trail. The route includes 90,000 feet of elevation gain and has bested well-known endurance athletes such as Courtney Dauwalter. Dauwalter attempted an FKT in 2020 but was forced to stop after 220 miles due to medical concerns.

Meyers bested Michaela Osler’s FKT, which was awarded FKTOY #4 in 2020, by 22 hours. Osler is on the podium again as well this year with her record-setting effort on the Long Trail. Reflecting on her achievement, Meyers said, “If you have a dream, go for it, because there will never be a perfect time. Be proud that you’re going to take the risk.”

The Men’s top spot went to John Kelly of Stanton Drew, United Kingdom (formerly of Tennessee) for his 2d 10h 4m 53s effort on the historic Pennine Way in the UK. Kelly first broke the 31-year record on this route in 2020 only to have it taken away eight days later. Coming back in 2021, he buckled down and lowered the FKT by more than two hours.

In an Instagram post published shortly after the awards were published, Kelly said, “All I needed for my run was the satisfaction of having done it, but that wouldn’t have happened without my support crew, or without others’ achievements for inspiration, or without some friendly competition. This belongs to all of those people.”

Interestingly, nine out of the ten Top Five winners last year (five males and five females) were for efforts on routes of 200 miles or more. These included premier US backpacking routes like the Arizona Trail, Pacific Crest Trail, Colorado Trail, and Long Trail. Hotly contested records outside of North America were the UK’s Pennine Way and the Te Araroa in New Zealand. 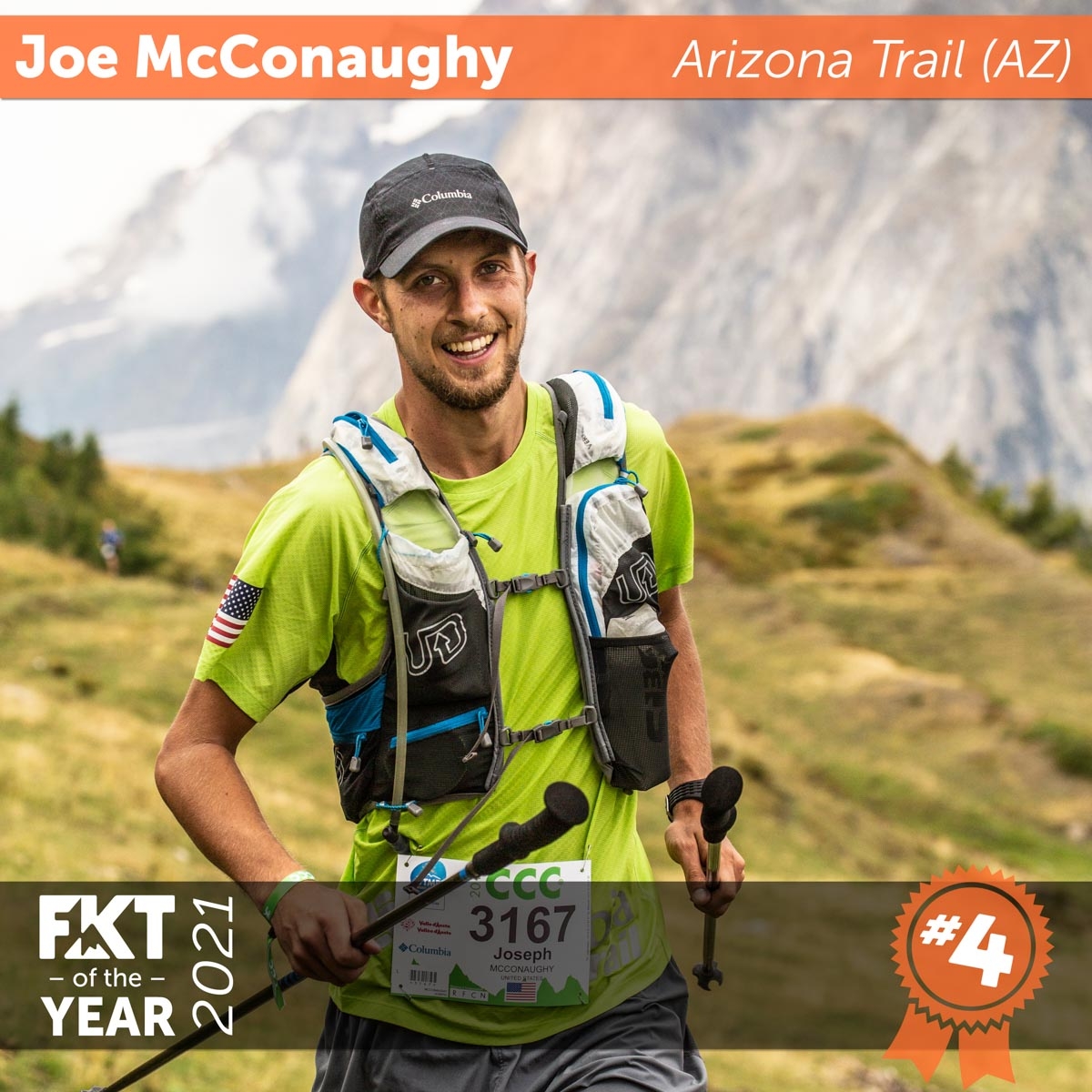 Serial record-setter Joe “Stringbean” McConaughy was voted #4 FKTOY for his 13d 3h 21m traverse of the Arizona Trail. He has appeared on the FKTOY rankings in other years for his FKTs on the Long Trail (2020, #2) and Appalachian Trail (2017, #1). Photo by FastestKnownTime.com & the athlete.

Timothy Olsen, who set a new supported FKT on the PCT, was also criticized for reroutes he was forced to take due to wildfires in California. Though his impressive record stands, it sparked a conversation about the future feasibility and ethics of FKTs on that route. 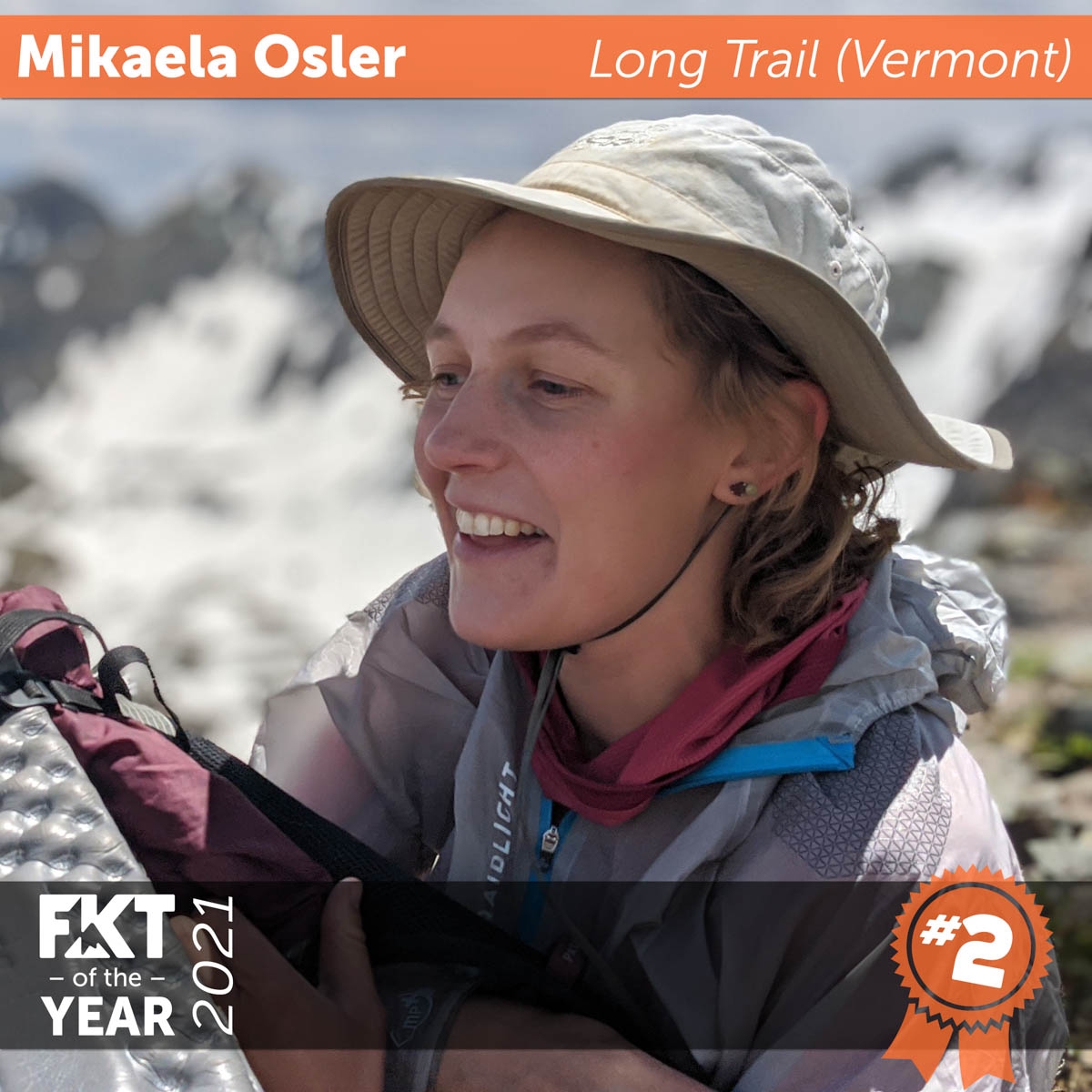 Michaela Osler’s 2020 Colorado Trail FKT was beaten by Nika Meyers to earn top accolades, but her own 6d 11h 33m record on the Long Trail earned her second place. Photo by FastestKnownTime.com & the athlete.

Belgian dentist Karel Sabbe, who has previously set Supported FKTs on both the PCT and AT, continued his trend of long-distance records with his 30-day run of the remarkable 1,550-mile Via Alpina Red Trail in Europe, earning him #2 FKTOY. The 45-minute documentary about his attempt really brings the experience to life and gives a glimpse into the difficulty of these efforts.

As the popularity of Fastest Known Time speed records continues to soar, competition on the world’s most iconic routes intensifies. Though the 2021 FKTOY awards heavily favored long trails, there were many other records that, while not as protracted, were equally commendable.

The team at FastestKnownTime.coms spends an inordinate amount of time tracking, verifying, and organizing speed records from around the world. Thanks to their efforts and those of countless volunteers and engaged community members, we all get to benefit by learning and hearing about incredible athletes and gaining inspiration from their feats.