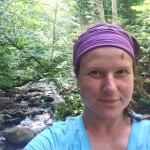 On Thursday morning, we left Lordsburg, and started a road walk under cloudy skies. My stomach still wasn’t feeling right, and the asphalt was tough on our feet and joints. Eventually, we left the road and resumed our game of finding the next CDT sign. We crawled under barbed wire and climbed over a few fences as we headed towards a mountain range in the distance. While we were eating lunch, we saw Art Gypsy and Indy, and then we met Mario, who is from England. My mom is from Scotland, so I always enjoy meeting people from the UK. 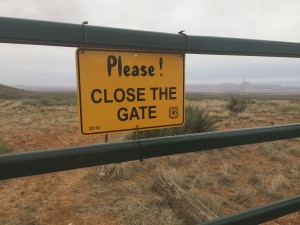 A gate that closes and open is so great because we don’t have to crawl under barbed wire.

As we headed into the Gila National Forest, the terrain changed completely. There were actual trees dotting the sides of the mountains, and the cacti were less plentiful. We didn’t hike too long the first day, and I went to sleep without eating dinner.

The next day I woke up feeling completely refreshed. I slept for ten hours! We studied the maps and the mileage because we want to get to Silver City on Sunday, so we can go to the post office on Monday. 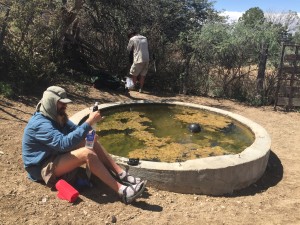 We walked on a two track road, and today for the first time, we hiked on an actual trail. I was beyond excited! There is also shade and bushes. There are less cows, which means less cow shit, and that is fantastic. Unfortunately, I haven’t seen any of my beloved jackrabbits, and that is sad. We also had our first experience filtering water from a cattle trough. The water was surprisingly clean under the green algae and cold.

We got an early start since we wanted to take advantage of the cool morning temperatures. Not far from where we camped, we found a parking area and a trail head. We also found a water cache that Radar had left! We were quite happy, and we added electrolytes to our water. 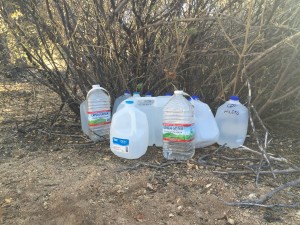 Then we started climbing Jack’s Peak, which is near enough 8000 feet, and the highest mountain that we’ve ever climbed. The views were insane! There were several antennas at the top, but we ignored them. We were mesmerized with the scenery, tall pines, and the cacti that grows that high. We ate lunch, and then we climbed Burros Peak. The climbs were both tough, but we laughed about how they wouldn’t really be significant on the AT, but we were at 8000 feet for the first time in our lives! 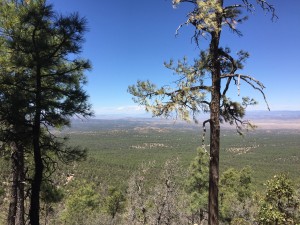 From the top of Jacks Peak.

On the way down, we had to choose which route to take, and then, we got misplaced. My husband was calm and collected. He’s definitely better at reading maps than me. I was worried and maybe even stressed, but I recovered.

Finally, we arrived at a dirt road, the Tyrone Ridge Road, and we decided to walk the four miles to the highway, Route 90. This was not a pretty walk. The road is located next to an old copper mine. We figured we could start walking towards Silver City with the intention of finding a place to camp. 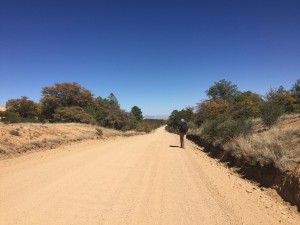 We got to the highway with the knowledge that we had twelve miles to Silver City. We were both hot, and as we walked, I imagined a cartoon version of myself sinking into the asphalt as the tar melted, oozed, and stretched like hot cheese stretching on a pizza with every step I took. 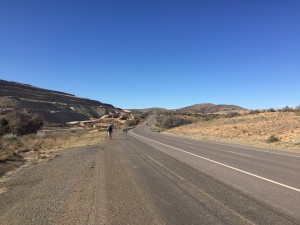 The endless road walk on highway 90 into Silver City.

Six miles later, we hadn’t seen any options to camp, and my shadow was getting longer – the sun was making a downward trajectory. I was beginning to panic about walking on the side of 65 mph highway in the dark.

And then, Hector arrived. He pulled over ahead of us, and he said with a happy, pleasant smile, “Do you want a ride into Silver City? It’s going to be dark soon and cold.”

Well, I left my purist heart on the AT. I was hot, tired, and my feet hurt. I decided that what Hector was offering was Trail Magic and Trail Magic triumphs yellow-blazing. On the way into Silver City, Hector, who is originally from Puerto Rico, told us places to eat and visit, and he dropped us off at the Silver City RV Park.

We got a tent site for $15, and we got dinner at Blake’s Lotaburger, which is a pretty great fast food chain that is based out of Albuquerque. I will also admit that I was quite thrilled that we arrived in Silver City on Saturday after the post office closed, which means we had to zero on Sunday.