Day 37 started off with the much hated overland section of the North Coast Trail. I ascended with the help of some ropes into a giant bog. Sometimes there were nice boardwalks to whisk you through the swamp, but other times you were on your own. There were trees to climb over and tangles of roots to navigate, and of course, there was mud. Lots of it. 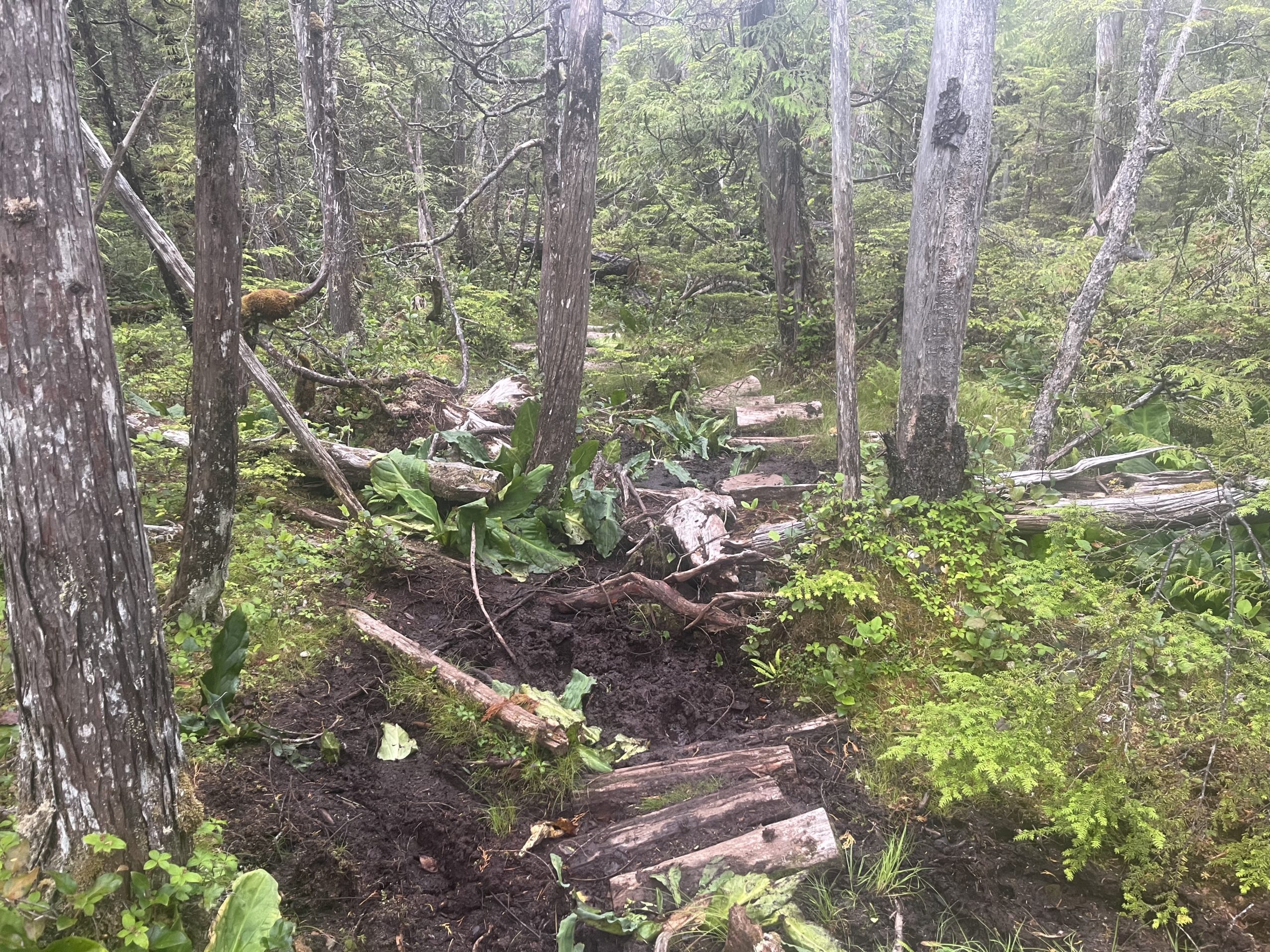 A muddle: a mud puddle

I actually welcomed the obstacle course as an interesting shake-up from the long, fast but boring road of the day before. I had to resist the urge to check my GPS too frequently though. Even going a hundred meters took so much effort, so seeing my actual progress always disappointed me when I felt like I had gone so much farther. 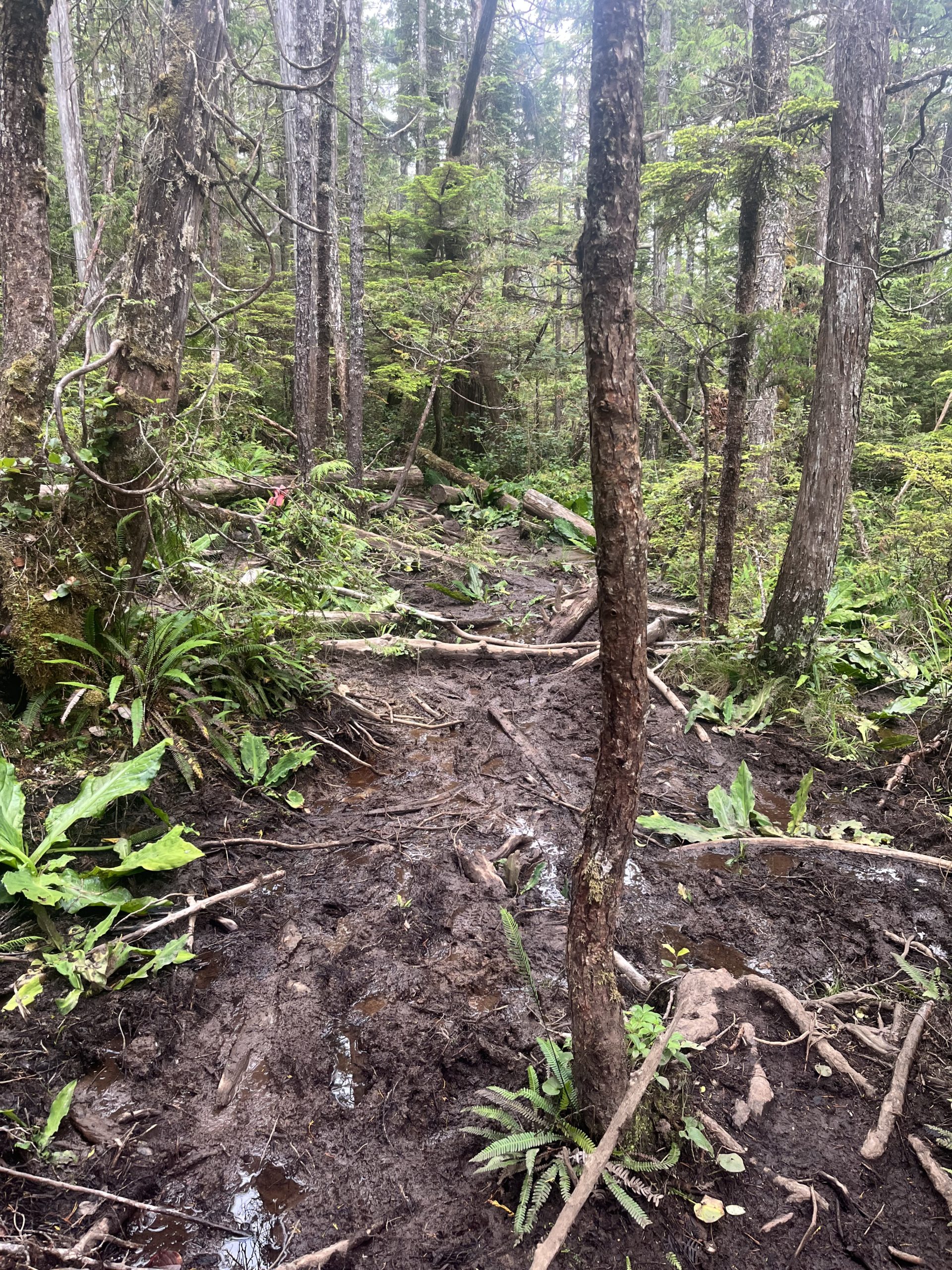 After taking 3 hours and 45 minutes to go 9 kilometres, I climbed down onto a nice sandy beach.  Another short overland muddy slippy-slide through the forest and I was on a pebble beach at the mouth of the Nawhitti River – my campsite for the night.

Since no one else was around and the sun had just come out, I had an amazingly refreshing skinny dip in the ocean. Sitting in the sun to dry off, I watched the seagulls and an otter bob about in the kelp forest offshore, amongst the jumping fish. For all the difficulty of the hiking, it was so worth it to arrive at places like these and just be in them, soaking up their energy.

Since I was now in a provincial park, I had the luxury of being provided with a food cache, an outhouse (with TP!), and tent pads at every campsite. It was nice that I no longer needed my paracord for hanging food – but it was still put to good use, along with my extra shoelaces, in securing my semi-freestanding tent to the platform of the tent pad. I felt slightly smug at my nice taut setup while other peoples’ flapping vestibules were awkwardly weighed down with rocks.

From the beach, I could see Hope Island off in the distance. It is the home of the village site of the Tlatlasikwala First Nation (formerly known as the Nawhitti), whose traditional territory also encompasses these shores crossed by the North Coast Trail. Though they originally occupied a different site near Cape Sutil (which I would be passing by soon), they relocated when it was burned down twice by the British Navy in the 1850s. 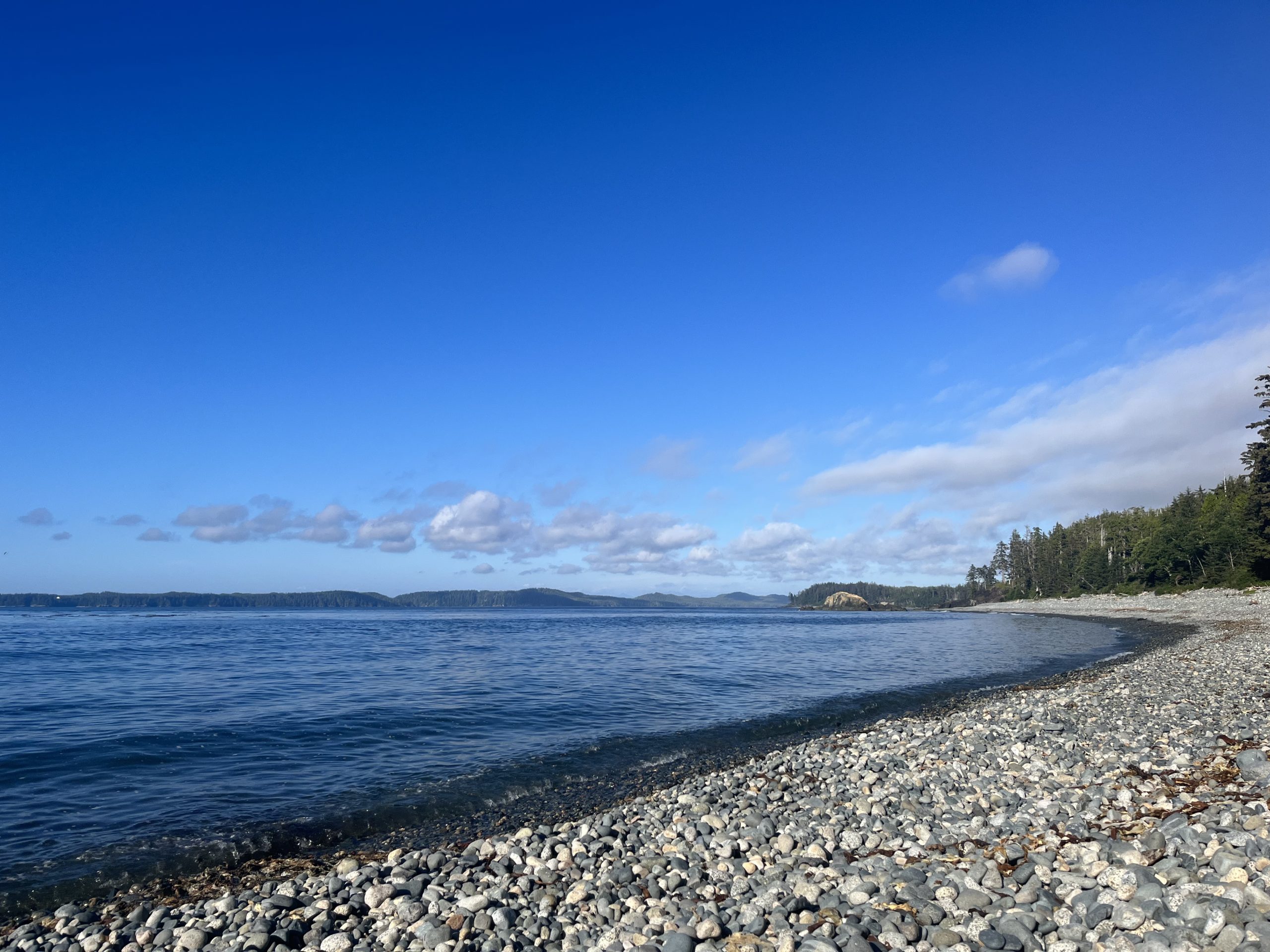 Hope Island is the distant land mass. From the beach at Nawhitti River

It was so interesting to contemplate how indigenous peoples have lived in, and in harmony with, these places since time immemorial, and how recently in history the patterns of human life on this coast have been shaken up. Now, reserves and village sites lay empty, when they might once have seen longhouses and canoes and families and friends. Now, people come here to get away from their regular lives and hike, camp, and have a wilderness experience, when once these places were actually a part of the regular lives of whole nations of people.

Day 38 began with a cable car ride across the Nawhitti River. Well, it was a ride until about halfway across, until the momentum from pushing off at the on end petered out and I was hanging at the low point of the cable suspended above the middle of the river. Then I had to pull myself up to the disembarking tower on the other side. My arms were finally getting a workout, after weeks of leg days. I had to stop and rest every few pulls when the bicep burn became too much. 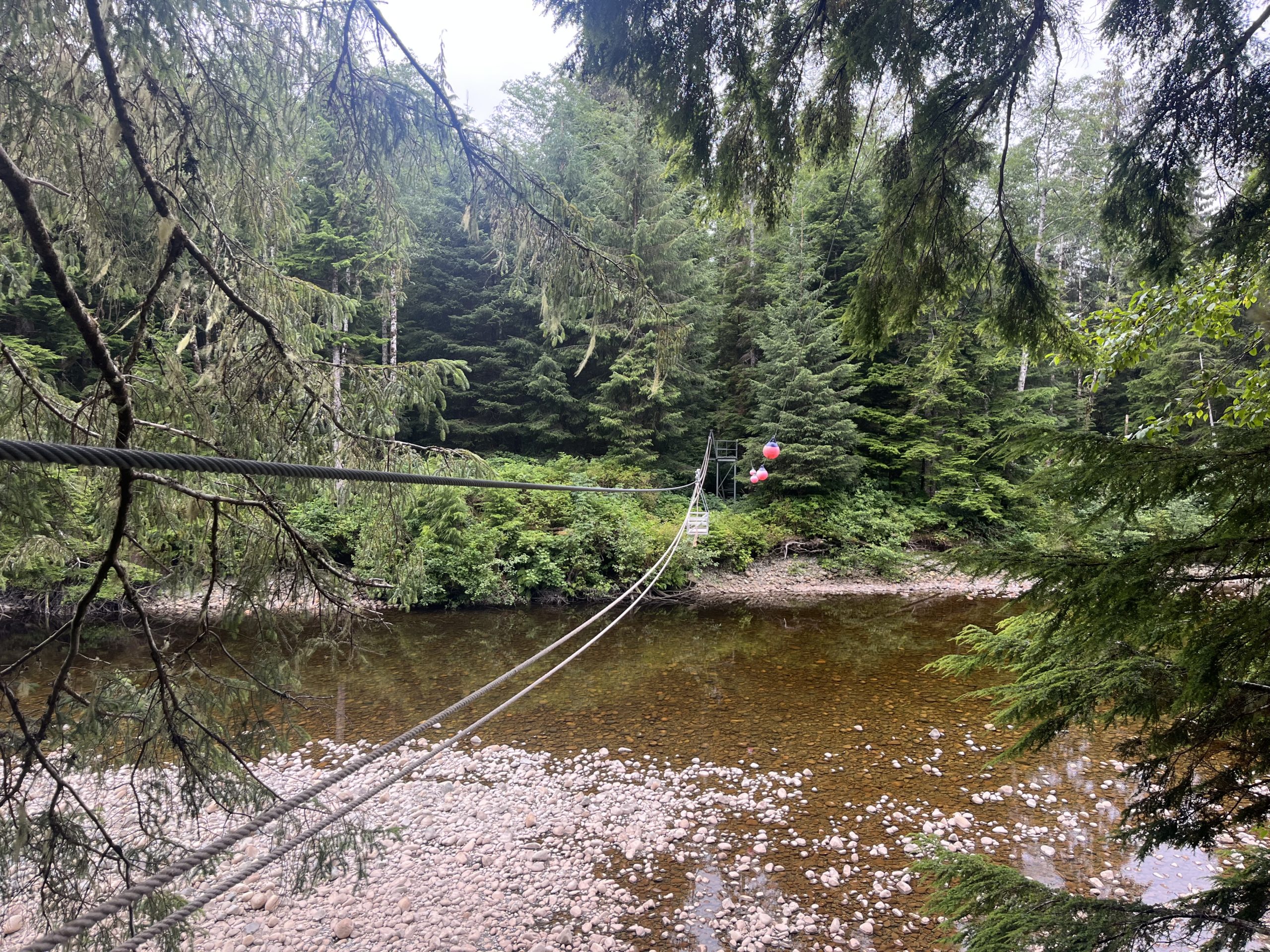 After that, the day was a blur of climbing up ropes, over headlands, and dropping back down onto pocket beaches. The steepness and muddiness of climbing around in the forest, and the pebbly beaches that sometimes felt like quicksand by the way I sunk into them when I tried to move forward, made for slow going. The ever present crashing sounds of the waves filled my ears, like the stench of rotting seaweed did my nose. 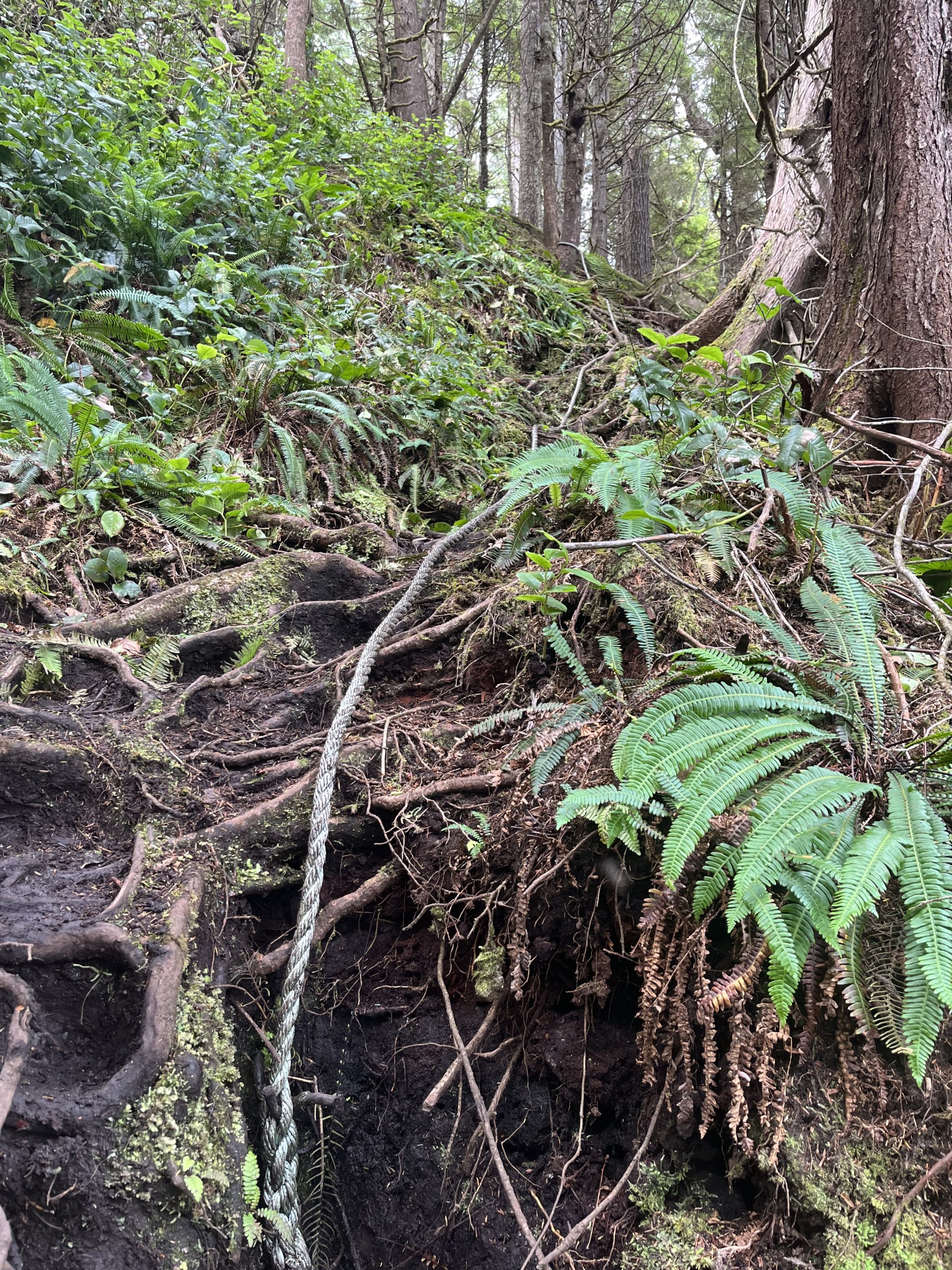 Climbing up and down the headlands

Midday, I passed by Cape Sutil, the northernmost point of Vancouver Island. 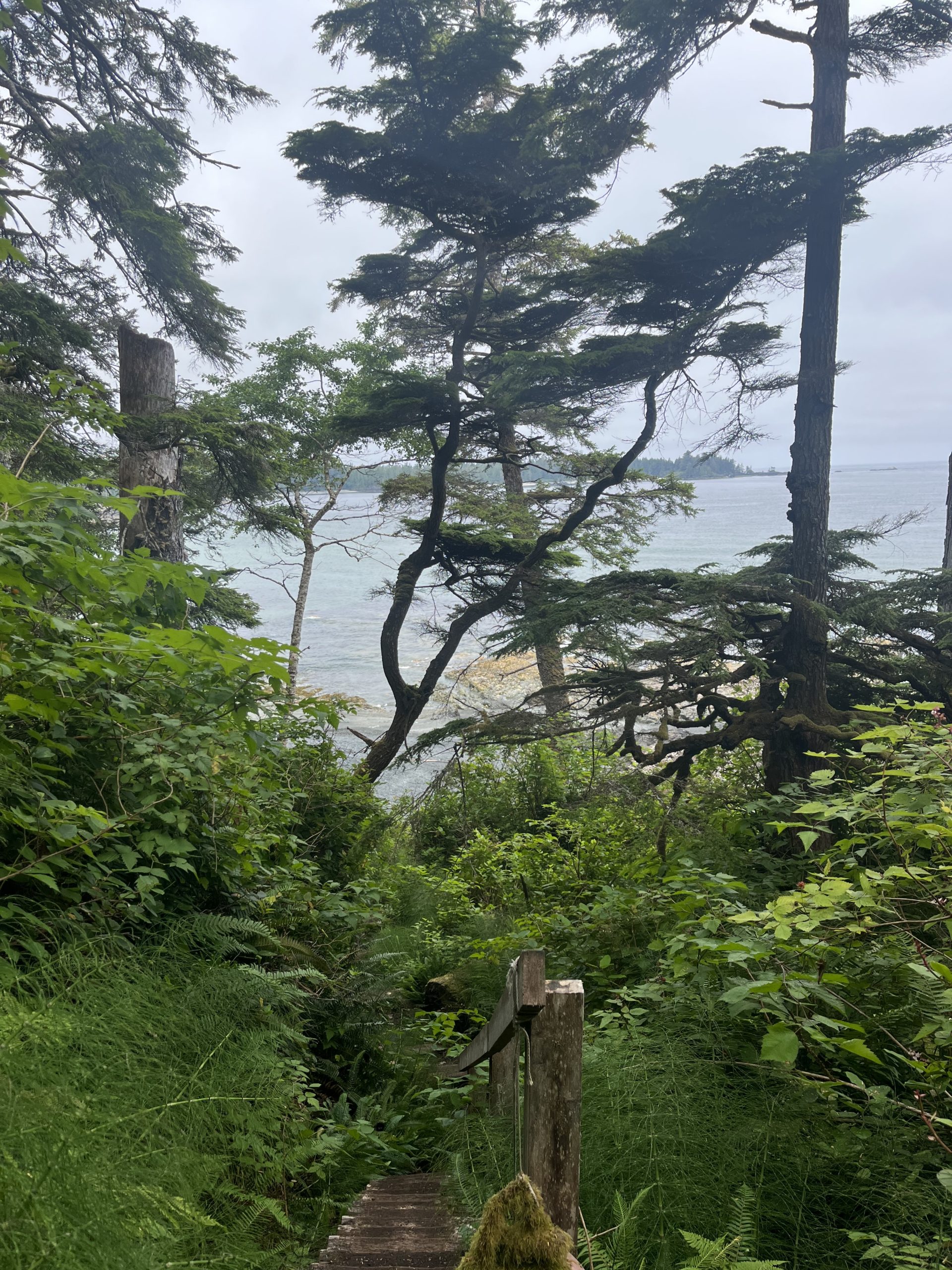 Descending onto the beach, Cape Sutil in the background

Even though I knew that I had now connected the southern tip to the northern tip through footsteps (well almost, as I had yet to complete 100 kms I missed in the middle), it didn’t feel that momentous. I had a feeling it would be similar when I reached the Cape Scott lighthouse, the final endpoint of the trail, in only a few more days. Being on the ground, every day, just walking, it was hard to picture all those days adding up to a huge long line stretching from one end of the island to the other. Whenever I looked at my maps and zoomed out to see all the ground I had covered, I just could not believe it. I would start to second guess myself – did I really walk all that? Was I sure I didn’t make a mistake somewhere? Maybe the magnitude of the journey was something I could only grasp once I had distanced myself from it a little – right now it was too close to my everyday experiences to feel anything other than ‘normal’ or even ‘mundane’.

However, here was nothing mundane about my campsite at Shuttleworth Bight. It was the most beautiful beach I had seen yet; a gleaming arc of white sand welcoming the rhythmic waves of the gently rising tide. I watched night fall from a driftwood perch, thinking about how lucky I was to sleep in such a place. 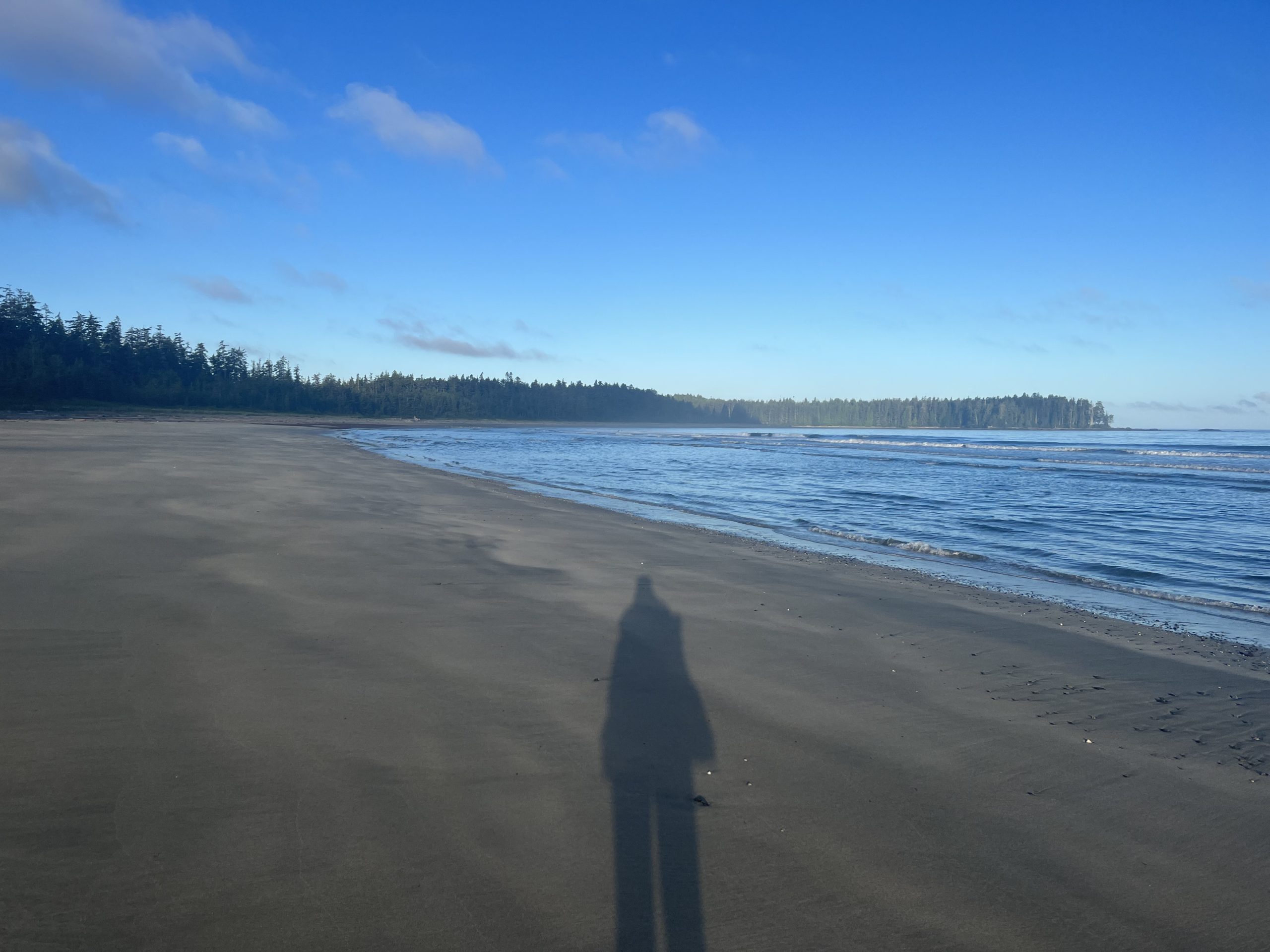 I don’t know what happened, but on day 39, I ended up going 27.5 kms, reaching the end of the ~43km NCT and heading into the body of Cape Scott Provincial Park, to post up at Nels Bight.

After crossing the Strandby River via cable car, it was almost an unbroken beach walk all the way to Laura creek. You know how when you’re climbing a mountain and you see ‘false summits’, points which feel like they must be your destination but they only hide your view of where you’re really going to end up? In the same way, I was fooled by the undulating shape of the coastline into thinking the creek (my chosen lunch spot) was just around the next headland, just around the corner, only to see yet another headland behind it, with no creek. I would then check the map, sigh, and keep trudging through the pebbles. 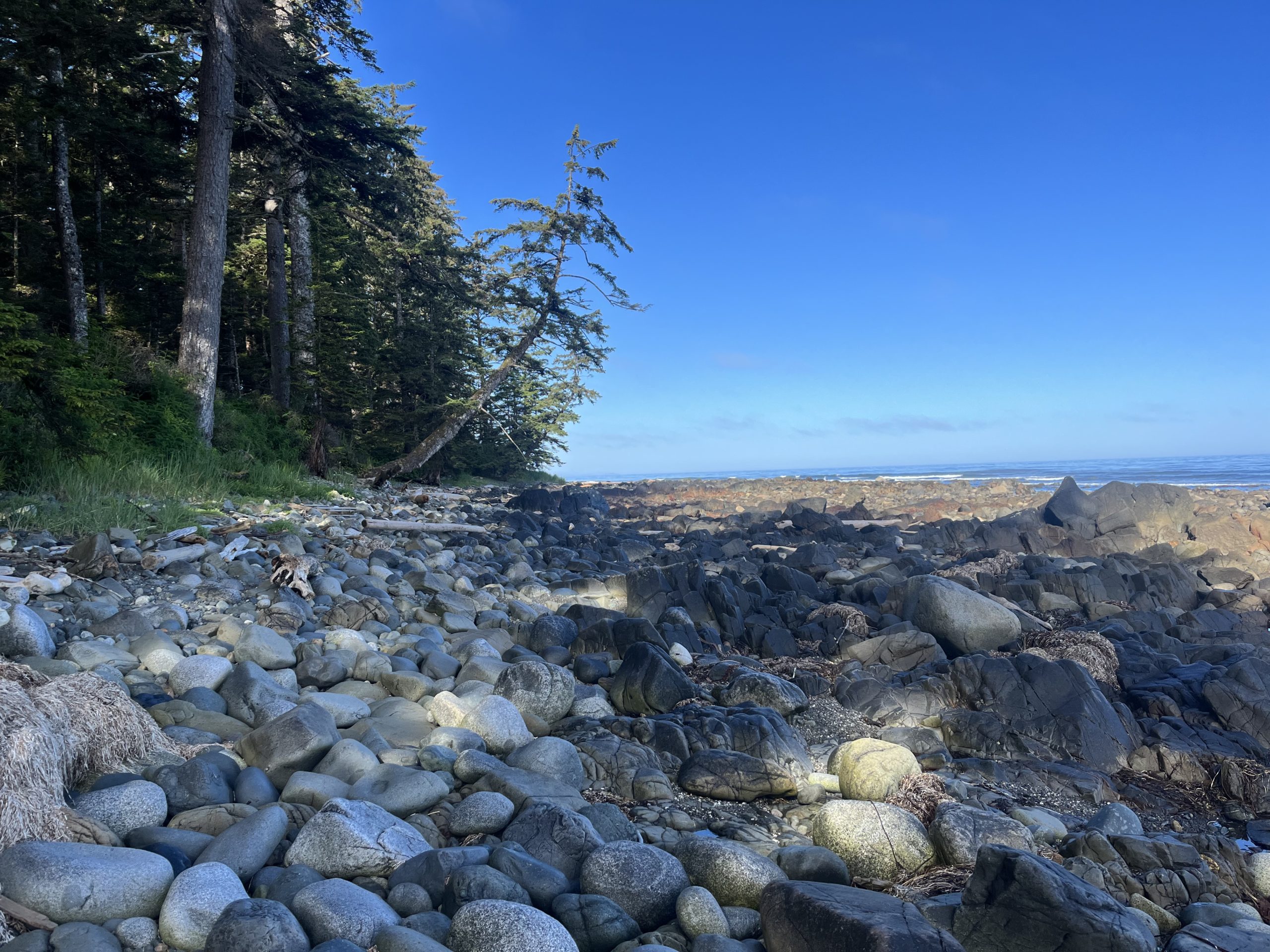 Is this it yet?

Also, before I could have lunch, I had to navigate around a bear having its lunch on the beach. After checking me out, it went back to digging in the seaweed and let me pass.

Back into the forest I plunged after crossing Laura creek – back into the mud. I dancing around obstacles as fast as I could – and within an hour, I spit out onto the gorgeous Nissen Bight, which was the end of the NCT. 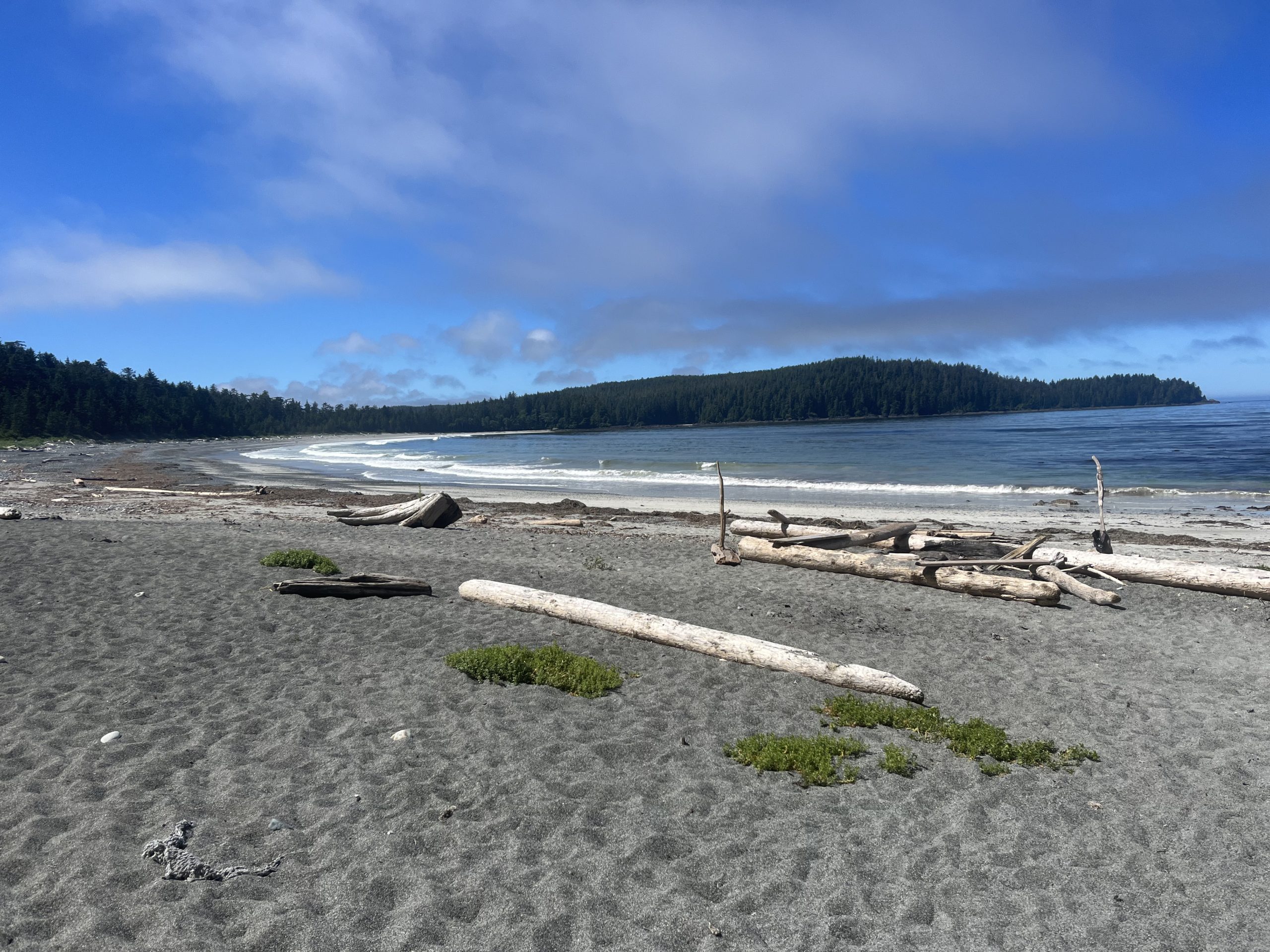 After stopping to eat a lot of chocolate, I decided I could make it one beach over, to Nels Bight, before the day was done – then I would be just a little closer to my final destination, the Cape Scott lighthouse, which was the endpoint of the VIT. All fueled up, I turned onto the amazingly flat and mud-less trail for a final few easy kilometers. 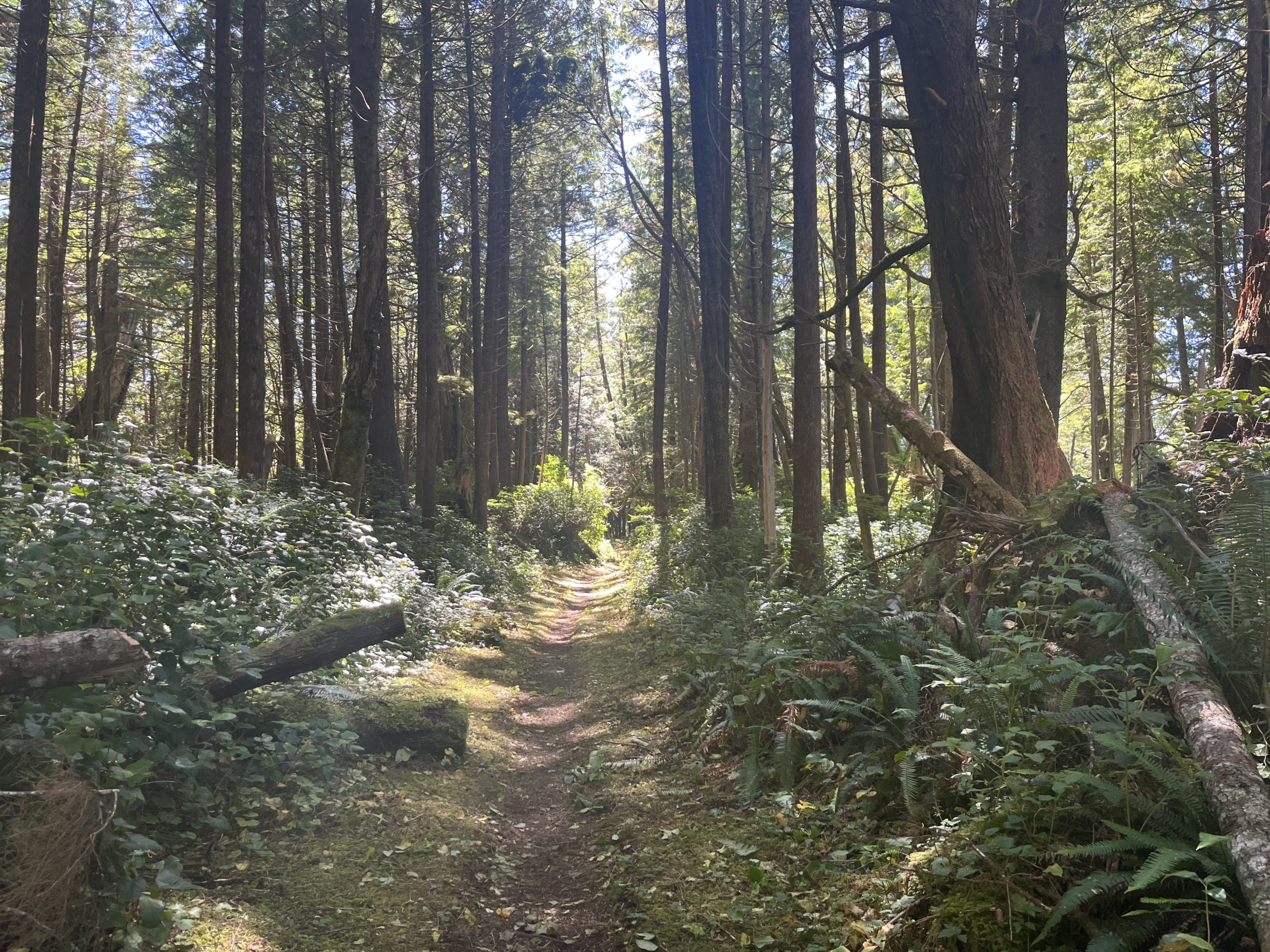 Somehow, Nels Bight was even more stunning than Shuttleworth or Nissen. The vast expanse of flat white sand was the same color as the mist blowing off the ocean to hover above the clusters of seagulls and limpets and seaweeds. I was glad to finally be there. 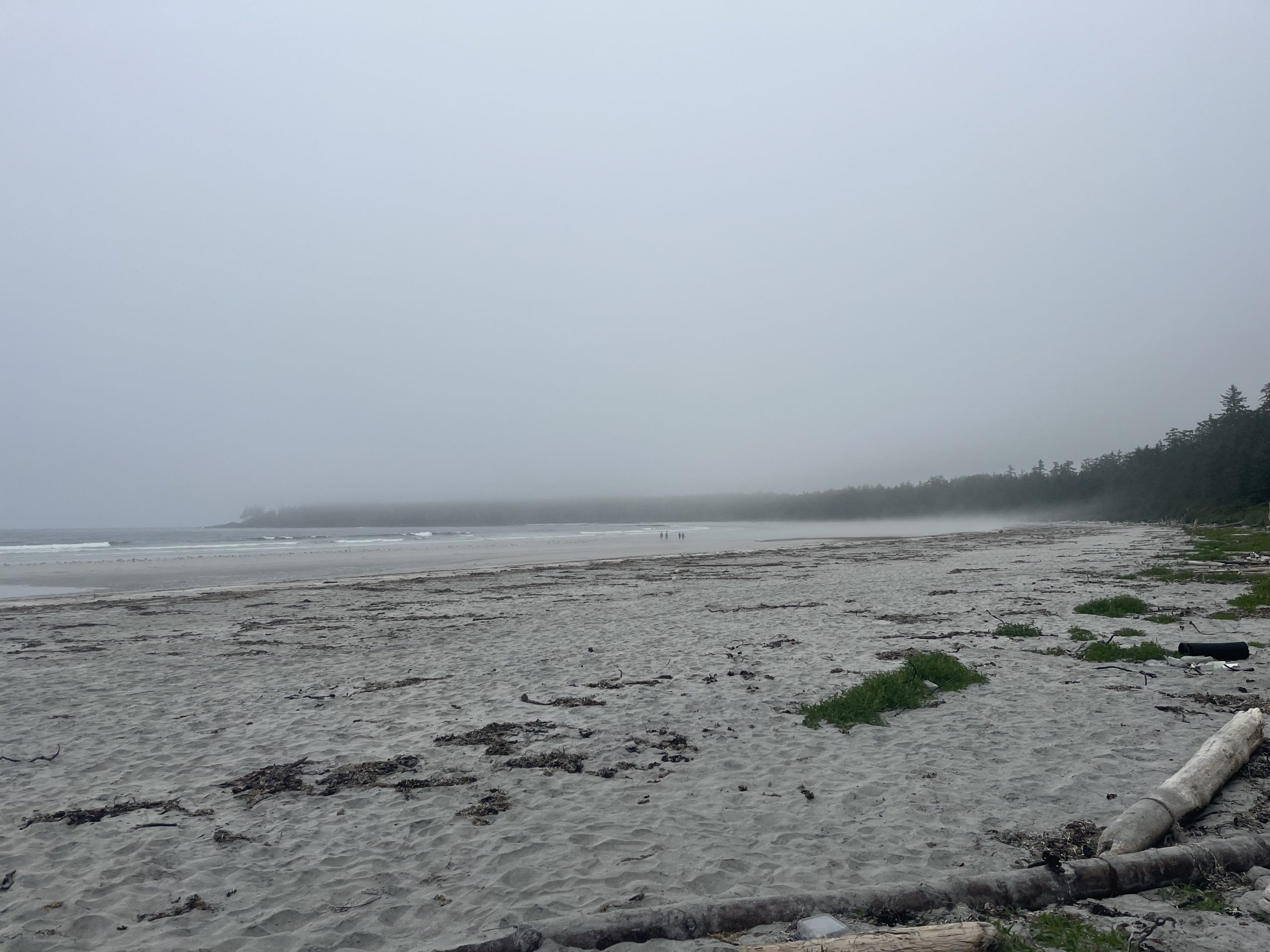