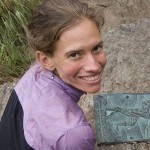 Mailbag with Jennifer Pharr Davis: The Online Feud Between Carrot Quinn and Lint

We are thrilled to introduce a brand new series to The Trek- Mailbag with Jennifer Pharr Davis! We’re taking hikers’ questions and passing them off to the trail legend for her wisdom and analysis. Here’s our first installment, plus a little background on the newest addition to The Trek family… in case the very unlikely scenario you somehow haven’t heard of her.

There are hikers out there with more miles than JPD’s stout collection of 14,000 (not too many), but we can’t think of anyone who has a wider variety of experiences. JPD has solo thru-hiked the AT and PCT, set the self-supported FKT on the Long Trail, and the supported FKT on the Appalachian Trail.  Her AT FKT landed her the honor as one of National Geographic’s Adventurers of the Year.

She’s about as versatile as they come, completing the AT 46 days (averaging 47 miles per day), and has also literally written the book about hiking slowly with non-record-setting family members. She has kept her marriage going while hiking with her husband across the Colorado Trail and on 1,200 miles of European footpaths, has trekked on six continents, and spent time on the trail with her daughter in all 50 states. In 2017, Jennifer thru-hiked the 1,200-mile Mountains-to-Sea Trail, with her family meeting her for daily jaunts…. allowing her 10-month-old to nurse at the same time. Yup, she hiked a long trail while nursing. She has also backpacked 650 miles and guided trips while pregnant, and her current project is checking off a section hike of the CDT and collecting “shorter” long trails in the southeast. She was also one of the first thru-hikers to turn the trail obsession into a sustainable career… something most of us wish we could do. JPD has authored multiple books, most recently The Pursuit of Endurance.

But the real reason we love JPD and ask for her input? For such an accomplished hiker, she is “relatively normal (her words) and incredibly humble. She has figured out how to have a life off-trail as a wife, mother, and professional… and continue hiking. She has kept it classy amid the negativity and tense confrontations that can be part of the hiker trash community, and she has always found ways to give back to the trail and conservation organizations. Basically we want advice from JPD so we can learn how to function as the best hikers we can be, on and off the trail.

Have a question for a future Mail Bag article? Email [email protected] and we’ll pass it on.

Hey JPD, I’m sure you’ve seen some of the hiker drama on social media these past few months. As a woman I want to support other women who have felt victimized or harassed, but I’m also uncomfortable with a lot of the insults and arguments that have surfaced online recently. So I’m curious—what are your thoughts on the Carrot vs. Lint feud?

Ahh… the great Carrot vs Lint social media face-off dominating the 2018 long trail off-season, where do I begin?!?

First of all, can’t we go back to debating what date is too early to start the PCT and arguing the exact base weight that differentiates between ultralight backpackers and unprepared thru-hikers? These annual subjects suddenly seem like a more worthy and desirable conversation.

In case you missed it, the current situation is this: a prominent thru-hiker (Carrot) has accused another prominent thru-hiker (Lint) of emotional abuse and has henceforth gone to extreme lengths to discredit and socially shame that individual. To be frank, this gives me a twisting stomachache akin to the onset of giardia.

There is no room for emotional or physical abuse on long-distance trails.

This is not just a personal sentiment; it is a statement that has been expressed through the conversations and actions of the greater hiking community. More than the mainstream culture, hikers do a commendable job of caring for each other and respecting one another. We are able to look past political and religious ideologies, ignore educational and socio-economic groupings, and move beyond our stereotypes of gender, age, and ethnicity in order to walk side by side.

In my experience, this is a community that self-polices poor behavior and tries to lift one another. As a woman, I feel safer, more supported, and more empowered on the trail than I do in society. So good job, y’all. And, more importantly, keep it up.

But until trails are a place where 100% of hikers feel safe and welcome, we still have work to do. Any form of hate or harm needs to be called out, and it needs to be put to a stop. With racial tension and sexual abuse dominating the news cycle, the trail—now more than ever—needs to be a haven from discrimination and abuse.

Whereas our on-trail behavior is overall commendable, let’s admit it—hikers still have some work to do behind the computer screen. Why do we all become such twits once we stop hiking?!?

Somewhere amidst our LNT and sustainability discussions, we need to start including a separate set of principles for internet etiquette. As a community, we can be atrocious with our online accusations and conversations. There is more to the Carrot vs Lint altercation than can be covered in a blog, but the core issue seems to be a difference between between pointing out the truth and viciously degrading another individual.

If Carrot misrepresented the fact that she hitchhiked off the Hayduke Trail when she was in fact heli-rescued, then she should expect negative backlash. But an error—even a blatant lie—does not warrant prolonged bullying. Lint needs to be held accountable for any malicious comments he directed towards hikers online, including Carrot.

The way to get someone else to understand your point of view is not to get in a keyboard-pounding altercation. Social media is a good platform to post your experiences and responses, but it is a horrible place to facilitate dialogue from opposing viewpoints.

I’m not sure to what extent Carrot tried to shield herself from Lint’s insults. What I do know is that when she launched a massive counter-attack on social media that included seeking out personal statements from Lint’s ex-girlfriends, it came across as a vindictive takedown rather than an essay of empowerment. She may be entirely en pointe in her accusations—and a skilled investigative reporter to boot, but her comments are coated in such scathing revenge that it becomes impossible to discern the truth.

Please remember when perusing social media that it is not an unbiased news outlet. The comments are a testament to people’s experiences and opinions, which provides the reader with a partial truth and a heaping side of emotions… but rarely the full picture. Everyone’s personal posts and commentary are rooted in predilection. You are never going to win when you’re arguing against someone else’s experience. Your energy is far better spent swinging a Pulaski and doing trail work than trying to redefine someone else’s reality.

So what should Carrot—or any other hiker—do if they feel personally attacked and at risk? We’ve talked about the hiking community’s self-policing, but let’s also mention the actual police. The one time I felt threatened on the trail I called the cops and filed a report, immediately putting an end to situation. If there has been a crime, or if you are experiencing harassment/abuse from another individual, please go to the authorities instead of trying to resolve or escalate the issue on social media. It may feel extreme or even seem embarrassing to file a police report, but ultimately a restraining order holds up much better than the opinion of online friends.

So let’s recap. Discrimination and abuse have no place on the trail or in online hiker communities and profiles. If it happens, take a stand and, when warranted, report it to law enforcement. Social media is a wonderful place to share authentic experiences – positive and negative – with friends, family, and followers, but when we drag someone else through the mud everyone gets dirty. Our words on social media are not only a personal reflection they also represent the long distance trail community. And just because we identify as Hikertrash doesn’t mean we get to act like trash.

So, what is my opinion on the Carrot vs. Lint debate?

I met Lint on the PCT in 2006 and thought very highly of him. I also crossed paths with Carrot on the CDT at Knapsack Col in 2015 and she seemed lovely. They have both put in a lot of miles and inspired others to experience the outdoors. I would welcome the opportunity to be friends with either one of them on the trail and online. I feel confident we all would “like” each other more if we became acquainted on a path as opposed to behind a screen. But regardless of where you meet your next hiker, remember, as individuals and a community, we are better than this. Act better than this!