Each spring, many hikers, some bearded and rough in appearance, come slogging out of the mountains and into the town of Hot Springs, looking much like Civil War soldiers, returning from war. Soon they walk past the Sunnybank Inn, the oldest building in Hot Springs, which predates the Civil War by over two decades, where hikers and inn merge to become a mirror of the past, when undoubtedly soldiers, Union and Confederate, trudged past this very inn.

The timeless beauty of this historically registered building, erected in 1840, like much of Hot Springs—a town of nearly 600 people—stands witness to the passage of time….a reminder of simpler days. When I inquired in town where to find the Sunnybank Inn, I was told, “People around here just call it “Elmer’s.” As I walked up, I was moved by its stunning architecture—Italinate-Victorian—with its many faceted surfaces and elegant roof angles… aging but ageless. 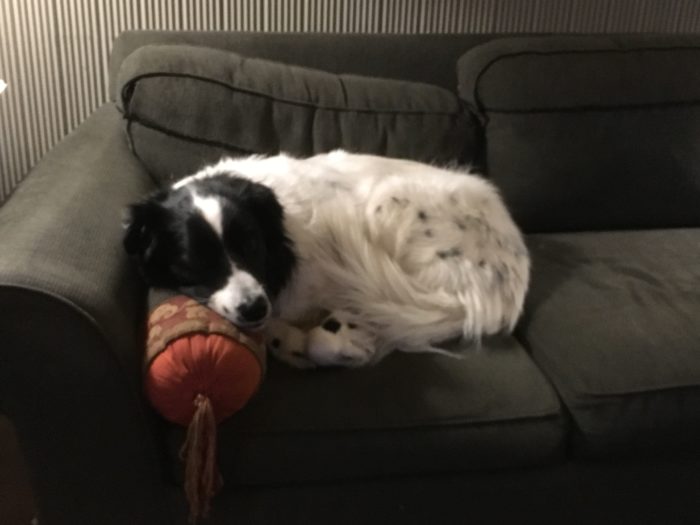 Everything about Elmer’s hostel is all about cozy comfort, which even his dog gets to partake of

I went to the side entrance door, that had a sign which read ‘open,’ but as I opened the unlocked door and stepped inside, there was nothing but silence, save the slight ticking of a grandfather clock somewhere. On a soft chair lay a black and white border collie, who lifted his sleepy head and gave me a tired little bark, as if to warn me that he was on guard, but was too comfortable to get up and run me off. I left a calling card and a case of 28-ounce Bush’s Best Vegetarian Baked Beans (from where I work)—as I always bring a gift to hostels—and left.

A Hostel is a Reflection and Extension of the Owner 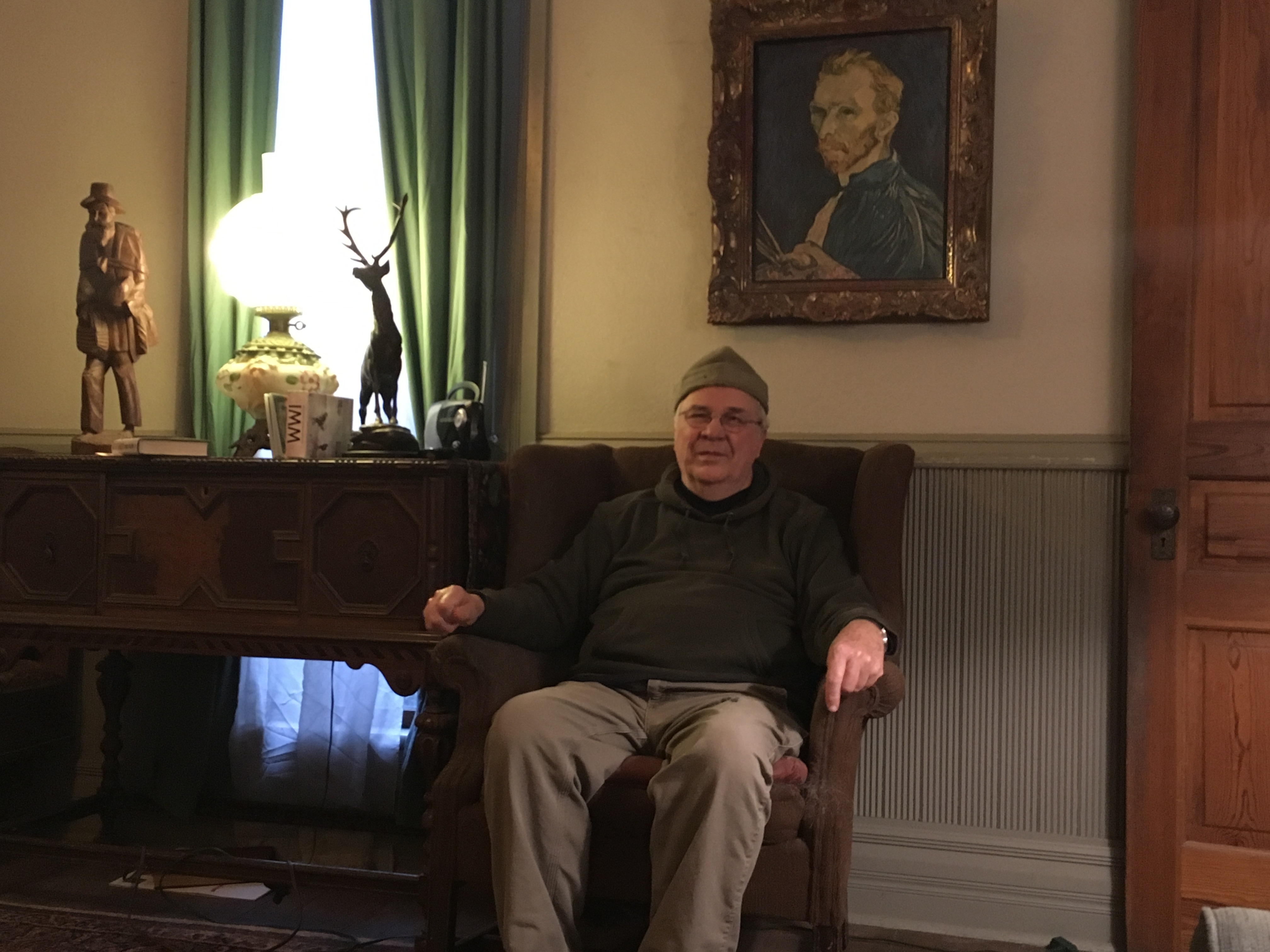 Elmer Hall, owner and operator of The Sunnybank Inn, more at home in his historic home’s comfortable surroundings than anywhere else

The next day, I drove up and met with another ageless treasure: Elmer Hall, an 80-year-old who could easily pass for 70. He had just finished unloading several loads of groceries, so he was a little busy. Strolling through the rooms of this vintage house, I found myself in awe of  actually walking around inside a place of such rich antiquity. Soon we retired to a spacious living room, where we sat in comfortable surroundings and began our visit.

Elmer struck me as a well-spoken man, alert and intelligent, shaped by many years of good reading and good living. He sat quietly beneath a classic portrait of Vincent Van Gogh, patient and calm as I asked him about his life and his hostel.

Why is it called the “Sunnybank?” I asked. Elmer explained how back in the day, architects would routinely give names to their structures, much like the fictional plantation, Tara, in Gone with the Wind.

Elmer started out in the mid 1970’s to hike the Appalachian Trail. After hiking much of it, he returned to the big city and worked as a restaurant manager for a couple of years. However, it wasn’t long before the magic of Appalachia began to call him. Finally, yielding to that call, Elmer returned to the town that offered all the things he’d been looking for in his life: nature, good hospitality, and hikers–he really missed being near hikers.

In 1976, Elmer began working at Sunnybank for a few years before the aging owners, who liked him a lot, offered him a chance to buy this historic treasure. So, in 1978 Elmer Hall became the owner of the Sunnybank. 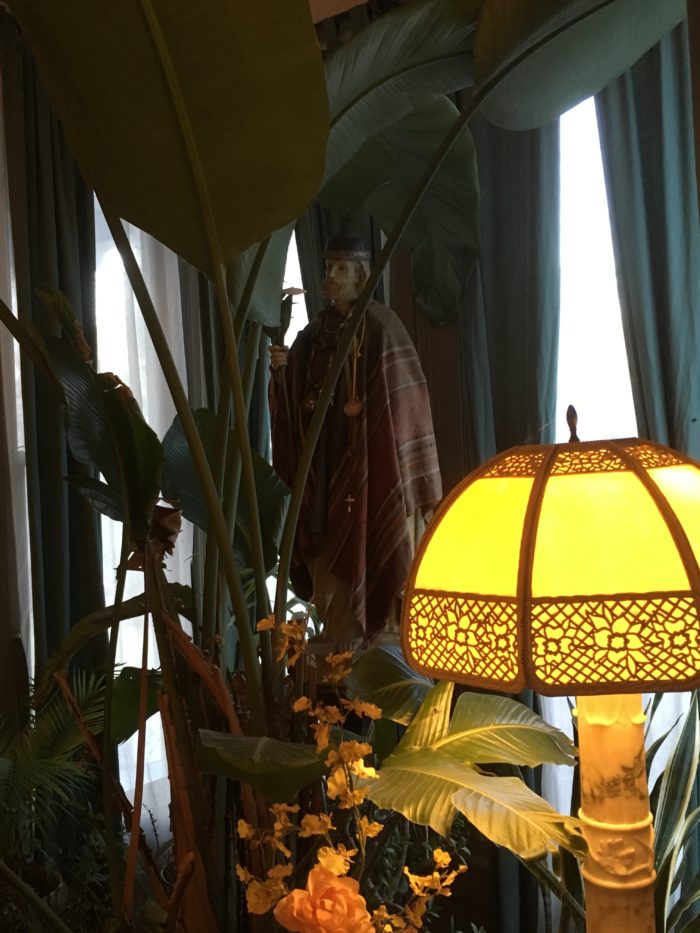 For over four decades he’s worked tirelessly to make this hostel into one of the most elegant and unique along the trail. As my eyes perused all the fixtures and furnishings that adorned the floors, the walls and the high, 14-foot ceilings, I gazed across the room, past a large, healthy banana tree and spotted a colorful, iconic half-size statue of Saint Joseph, standing atop a wooden pedestal, a bouquet of calla lilies in his right hand. Elmer smiled as he explained how he got it at a Catholic church auction, saying, “I think I paid 30 dollars for old Joseph over there.”

There be music in this place 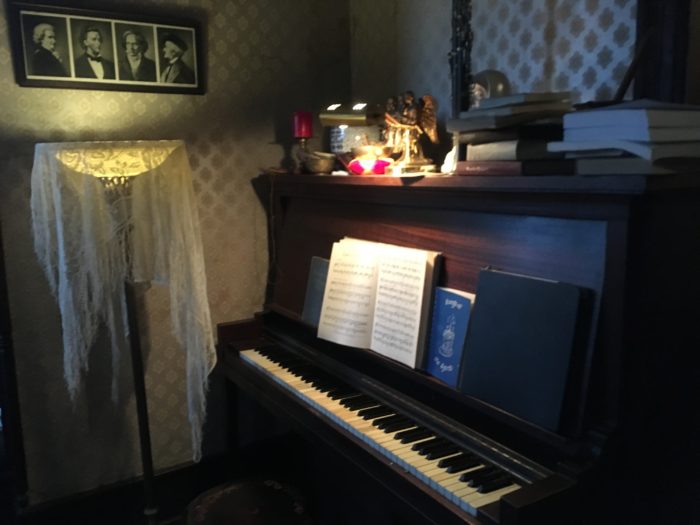 The portraits on the wall of the composers, Mozart, Chopin, Beethoven, and Wagner; all were alive near the time of the building of the Sunnybank

As he got up to show me around the place, Elmer explained how he furnished the house by going to auctions, estate sales and farm sales, picking up nice old pieces of furniture, fixtures and wall furnishings to adorn his place in a sort of old-fashioned, vintage style. He led me to another large room, that he called the music room. He had  a nice upright piano in one corner, with a banjo and two guitars standing upright on 3 velvet cushioned clergy chairs in front of the tall bay windows. There were even two clarinets, fully assembled, complete with reeds, ready to play. In addition, there were stacks and stacks of sheet music and books of ballads lying about in places all over the room.

Leave the Technology at the Door

I asked Elmer how hikers have changed over the years and he told me how, in earlier days, hikers were quieter and more reserved, whereas now “there is an element of hikers I like to refer to as ‘frat boys,'” drinking and partying heavily in every town they come to. He said he tries to encourage those types of hikers to stay elsewhere

“Why the No Cell Phone sign on the entrance door”? I asked. Elmer explained how he prefers hikers to not use cell phones or tablets because he feels, “people are computer addicted,” which he says leads to them missing out on the beauty of the hiking experience. The lack of technological distraction does tend to create an atmosphere where people tend to converse more with one another, which seems fitting within the confines of this fine old house

Elmer told me he’s not had TV since the 70’s. However, he admitted, “I still love a good movie,” so he does have a DVD player and monitor on which to watch it. Although he doesn’t embrace much modern technology,  he still listens to NPR and gets a regular subscription to the New York Times.

Elmer showed me around his spacious kitchen, not organized in the neat way a Better Homes and Gardens kitchen would be, but there was a utilitarian logic to it all that seemed to work for Elmer. He said, “I still do most of the cooking”, although he gets help from his work-stays, whom he refers to as ‘Interns’, whom he also pays a stipend to, along with free food and board. The interns also help out with the running of the hostel.

When I first laid eyes on his commercial Vulcan stove, with its six large gas burners, twin ovens, and 30-inch grill top with broiler, I knew he had to be a serious cook. 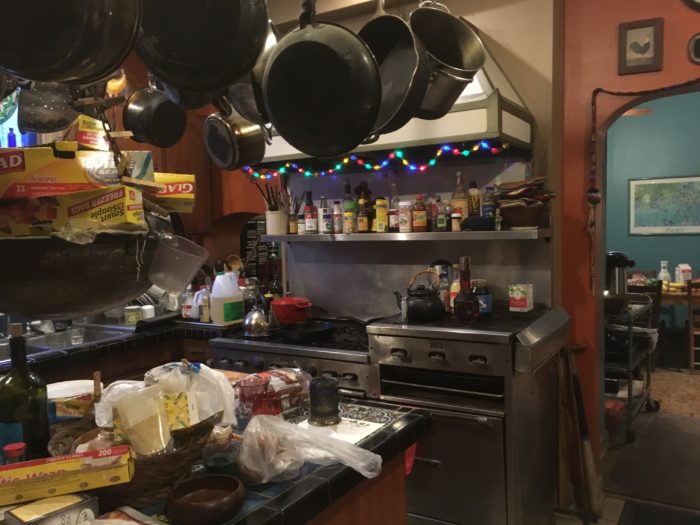 Elmer has a no-nonsense kitchen that has produced delicious vegetarian cuisine for more years than many hikers have been alive.

Being a long-time vegetarian, Elmer only cooks from-scratch vegetarian meals for his guests, and he only cooks dinner for groups of four or more, charging $12 per person. It is a fixed meal, 5 courses, including dessert, followed by tea. When the through hikers start arriving en masse, Elmer said, “I like to serve large portions of rice or Thai noodles to fill them up. Everyone gets all they can eat—nobody goes away hungry.” He also offers breakfast for $6.

One young hiker Elmer told me about ate so much at his meal that, about the time he was ready to eat his generous slice of homemade apple pie, het turned an unhealthy shade of white and face-planted into his pie.  Though Elmer was concerned, the other hikers assured him that this hiker had done this before when eating too much in other towns, something to do with blood-sugar imbalance.

The future of Elmer’s

“So, Elmer, what do you see in your future here”? I asked. He chuckled and said, “I’m going to be cremated”. Unable to contain my laughter, I asked, “Not THAT future. What about the future of Sunnybank?” He told me that he has it willed to his godson.

As for the near future, Elmer is going to keep running the Sunnybank Inn just as he always has, with style and historical elegance.

Learn more about the Sunnybank Retreat Association and the historical building here.