AT Hiker Remembered for His Love of Hiking, the Outdoors

Eddie “Noon” Onis Noonkester, 60, whose body was found near the Approach Trail in Georgia on Feb. 19, was remembered by his family as a man who loved the outdoors and hiking.

“He didn’t take life too seriously and always took the time to appreciate the world around him whether it was sleeping under the stars or going for a long hike,” according to his obituary.

“He loved his family and he loved his friends and will be greatly missed. Hug those close to you, do what makes you happy, and take the time to look at the sky every once in a while.”

Noonkester, of Eden, North Carolina, began his Appalachian Trail hike north to Maine on the Approach Trail in Amicalola Falls State Park on Friday, Feb. 14. He was reported missing on Sunday, Feb. 16, after a friend called 911 to report concerns about Noonkester’s health. Noonkester called 911 about 20 minutes later, sounding confused and disoriented, and unable to tell the dispatcher where he was, according to authorities in Dawson County, Georgia.

“My Dad. A great father and a great friend.”

“I know a lot of you were following all of this closely and hoping for a better outcome, just as we were. Thank you for all the support and love you’ve shown our family.” 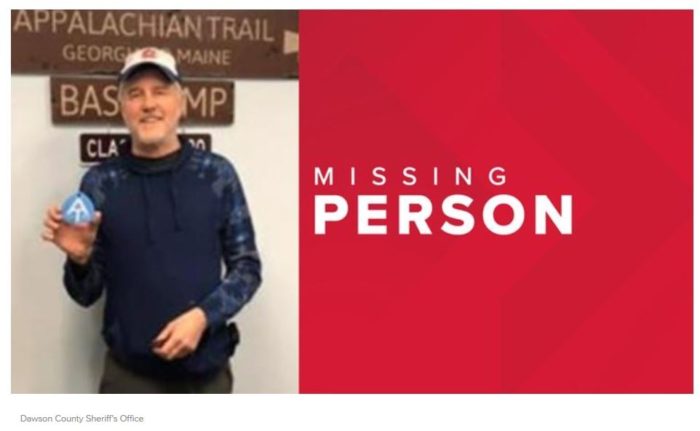 Noonkester was also remembered in his obituary as a good friend to others.

“He lived a happy and carefree life. He was a very reliable and loyal friend to many people. The kind of friend you could call on to help you move and he’d actually show up even though he hated moving. All he’d expect in return is a good breakfast or a cold beer.”

And his Goodwill visits were recalled fondly.

“Don’t ask where he got his shoes,” his obituary said. “He would say Goodwill and they were $5 and then you’d look down at yours and feel silly for paying $80.”

The search for Noonkester came to a somber end the night of Wednesday, Feb. 19, when Danny Thompson, fire chief in Dawson County, announced that Noonkester’s body was found near the Hike Inn Trail, which follows the Approach Trail for several miles before branching off.

Thompson, speaking that night at Amicalola Falls State Park, described the terrain where Noonkester was found as “difficult,” with “high slopes.” He praised the more than 130 searchers who worked during heavy rain, lightning, and freezing precipitation.

Wesley Noonkester, who helped search for his brother Eddie, thanked the searchers, and said through tears: “At the end of the day our goal was to bring Eddie home and we were able to do that.”

“I just know tonight that when I lay down that my brother’s in a better place.”

Thompson praised Wesley Noonkester for taking time during the final day of the search to help another hiker who twisted an ankle. Wesley and several friends stopped their search for Eddie and spent three hours helping the injured hiker walk to the Amicalola Falls visitors lodge, Thompson said.

Noonkester’s body was discovered about 2:30 p.m. ET Wednesday, Feb. 19, Thompson said. A cause of death has not been determined, but Thompson said it did not appear suspicious. The body has been taken to the Georgia Bureau of Investigation crime lab.

Searchers began looking for Noonkester after his 911 call, but did not find any sign of him until Monday, when workers at the Len Foote Hike Inn found Noonkester’s backpack and other gear near the Hike Inn Trail.