A cross-country road trip from Southern California began Mary and Terry Hill’s search for a unique and rural place to establish their business and new home.

Their dream of owning a bed and breakfast came true when they established the Mountain Harbour Bed and Breakfast in 2003. 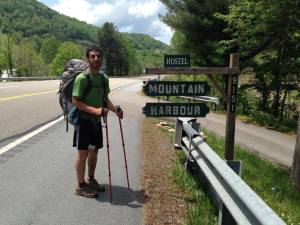 Botany, a 2014 northbound thru hiker, was on a mission to collect a stamp from Mountain Harbour for his AT Passport. (Photo by Kayla Carter)

“There was a lot of snow,” Terry said. “There were four guys standing out there with beards down to their bellies. They were shaking and freezing. All they wanted to do was get out of the weather.”

The Hills weren’t aware that they would eventually build up their bed and breakfast to meet the needs of guests like the travelers that showed up that day.

These guys were hoping to complete all 2,000 plus miles of the Appalachian Trail. Yet, they had added a mere three tenths of a mile on their feet when arriving at Mary and Terry’s place.

“They told me all about the trail that day,” Terry said.

These were the same hikers that introduced them to what is now called the AWOL guide, which some may even consider to be the AT’s holy text. Still, Mary said the hikers came regardless of how much they advertised.

“The hikers just found us,” Mary said. “This is a pinnacle point of the trail between Carver’s Gap and 19E.”

And that’s how the extension of their business’ name to include Hiker Hostel came to be.

For northbound hikers, Mountain Harbour is at mile 391 and mile 1,794 for southbounders. But, the Hills have noticed that the steady increase in business lately is not just from mainstream long-distance hiking hype. 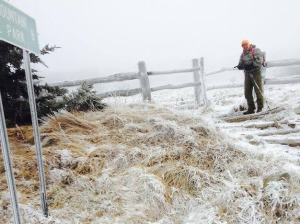 A member of the Hill family bids a farewell to Mav, a 2014 southbounder, after a shuttle to Carver’s Gap on a snowy day. (Photo courtesy of Mountain Harbor)

“That is probably the best section of the Appalachian Trail,” said David, Mary and Terry’s son. “More and more people, like the guys who work at outfitters like REI, are being referred to this section.”

While the year-round bed and breakfast was originally intended to serve only those who make reservations for the main guesthouse, the Hills were not going to turn tired and hungry people away.

“They just kept coming,” Mary said. “We weren’t prepared for hikers to start showing up at the door.”

David estimated that about 3,000 hikers could come through in a single season.

“They could be section hikers, through hikers or just out for a few days,” Mary said.

Breakfast Heard ‘Round the World

Now when Mary and Terry hear a knock at the door, they assume it is someone eager to try their famous breakfast.

“Their breakfast is famous from Georgia to Maine,” said David, who once while on a trip to Maine overheard hikers talking about it. “During the peak season, we’ll have 30 or 40 people here every morning for breakfast.”

Some hikers have hiked out of the Overmountain Shelter at 2 a.m. just to make it for the 8 a.m. breakfast, David said.

“Well, hikers like to eat,” Mary said. “When they are out there, they are always thinking about food.”

Hikers can make a reservation or walk in with the hope of snagging a bunk in the renovated 100-year-old barn that serves as a hostel overlooking a creek. It’s $25 per person for the hostel or $55 for a semi-private king bed. The hostel is equipped with a full kitchen, wood-burning stove, and video library, as stated in the AWOL Guide.

A tenting site and shower is $10 and a shower costs $4. Over-night parking is $5, but reduced to $2 for people paying for shuttles to trailheads.

A footbridge, which was rebuilt in 2004 after it was washed out, provides access to the main guesthouse. 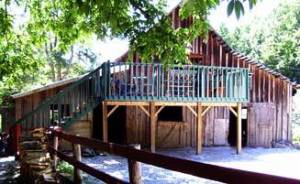 When they first bought the property, the Hill family never dreamed of turning this 100-year-old barn into a hiker hostel. (Photo courtesy of Mountain Harbour)

The Hills have enjoyed learning about the 18-acre property’s history. David said a portion of the land was used for re-routing the AT in years past.

“The people who lived here before had built most of that barn up to live in and rent out the main house to guests,” said David. “When the hikers just kept showing up, it just kind of evolved into what it is now.”

The Hill family strives to be as accommodating to guests as possible. Improvements to the grounds and facilities have been made annually.

The latest renovation included steps leading to a new landing pad where hikers can more easily check in with family and friends via the Internet.

“So, now there’s more room for them to spread out,” Mary said.

Mary thinks it is important that they provide WiFi for guests.

Since the Internet weighs as much as the device used to access it, pretty much everyone who would like to stay – hiker, or otherwise – wants it.

“We figured out that there’s a better connection closer to the house,” Mary said.

Another example of the many ways the Hills have catered to their unique clientele is by providing a slackpacking and shuttle service into town for resupply.

According to the Hills, there was a time hikers were not as welcomed by the long-time residents of the area. The Hills said they learned about how some property owners resisted sharing their land with the AT initiative.

“Nobody really wanted hikers in town back then,” David said.

The Hills said they have helped locals open their minds to the hikers that pass through.

“That’s all in the past,” Terry said.

“We changed that,” David said.

Now, Mary said most businesses in town know to contact them for hikers in need of a shuttle or a place to stay. 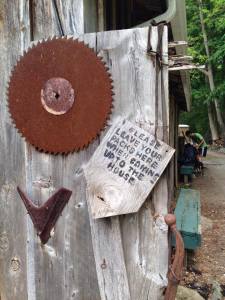 Just a little tip for thru hikers to consider when visiting the Mountain Harbour Bed and Breakfast and Hiker Hostel in Roan Mountain. (Photo by Kayla Carter)

“The majority of people now realize that hikers will help support the economy of our town,” Mary said.

Through his experience with the business and the trail, Terry said he’s met doctors, lawyers, CEOs, professors and people from all over the world.

“You never know,” David said. “They all look about the same when they come in, but they all have different stories to tell.”

Whether a guest is in town for a relaxing retreat, hiking the 15-mile stretch between Carver’s Gap and Highway 19E, or attempting an AT through hike, the Hills have been humbled by all the stories guests tell them.

While each visitor gives them the gift of an enriching experience, they hope to provide the same to guests as well.