My First Month Hiking the AT Was Like Trying to Quit Smoking!

If you have ever attempted to quit smoking you will know how hard it can be. I stopped 10 years ago and, although never regretted doing so once, I do still suffer from cravings once in a while. I also remember just how hard it was: I experienced physical symptoms like headaches, nausea, and cramps in addition to the emotional symptoms; trying to justify reasons why continuing smoking wasn’t that bad, mood swings and general grumpiness. I also had intense cravings, anxiety, tension, and frustration plus spells of drowsiness or trouble sleeping and an increased appetite. And thinking back on it now, the first month hiking the Appalachian Trail was no different!!!

On 28th February 2014 my son and I stood on Springer Mountain ready to start our Appalachian adventure. We had heavy backpacks, naive of the task ahead, but ready to start a great undertaking; hiking the Appalachian Trail. Like most people who decide to accept the challenge of a long distance hike, I had my reasons! The result of spending my days at work behind a desk had taken its toll on my health. I was 49 years old, overweight, not sleeping without meds, high cholesterol, acid reflux and pre-hypertension. I also was lacking the adventure and challenge I got with serving in the military, my days were all the same and work even crept into my evenings and weekends. I felt uneasy with where I was in life and questioned “was this what I wanted to remember my life being when it came to pass to the other side?” Well, it didn’t take much for me to decide it is not!

So about a year before starting our hike I started making plans, again pretty much the same as most others, I watched DVDs, TV shows and films; I read books, blogs, forums and articles; I attended a five day AT hiking class and went to the Appalachian Long Distance Hikers Association annual Gathering. I bought the gear, did the practice day hikes, and started my blog. I went through the routine and usual preparation you would expect and likely did yourself (or are doing right now). 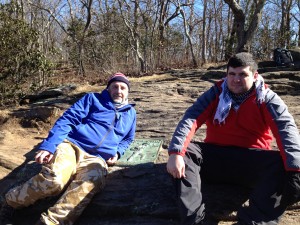 But stood on Springer Mountain, with my son, ready to start our great adventure I felt excited, never nervous, never scared; just excited. I was naive to what hiking the AT involved, I was naïve to the challenges we would face, the strength I would need, the determination and perseverance, I was naïve to just how hard the next 5 ½ months would be. But, and more importantly, I was naïve to the affect it would have on my life, the positive changes it made, the way it would become part of me like nothing has before. And yes I get it, it’s very New Age and Hippie to say, and trust me I am far from that, but it’s true! I think of the trail, without question, every single day of my post-trail life. I still have times that I cry thinking about it, watching our videos or reminiscing with trail family. And that’s hard to admit but I also have this honesty about me that I never had pre-trail, because to other hikers I can be me, just me, there is no society hierarchy on the trail, no one is better than anyone else, the lawyer, doctor, pilot, tree surgeon, student, unemployed; all the same! All humans living a basic frugal existence in the woods with a common goal, a common shared experience, a common understanding of suffering and pain; but all together as a community.

The first few days were extremely hard for me! My pack was over 55lb, I was retching and vomiting with the strain of hiking, I couldn’t eat for three days and felt sick as a dog. This wasn’t enjoyable, this wasn’t the hike in the woods I imagined, three days in and I was in a bad way. And so my first trail experience which made me realize that hiking the AT is a community event. We was passed by a bearded hiker blasting tunes out on a speaker he had attached to his pack, he told us “I hear there’s a guy 5 miles ahead doing burgers and stuff for hikers.” Now you may think that’s great news and my morale would lift, goodness knows I needed some proper appetizing food. However, this had the opposite effect, you see 5 miles was at least 3 hours away for me at my pace and it was late in the day. I knew despite all the will in the world, by time we got to Woody’s Gap the burger guy would be gone. But here’s the thing, trail time is nothing like real time, there is no Saturday and Sunday as all days are the same, your day is not dictated by work, store hours (except resupply day) or TV show times; it revolves around the miles you want to do, water sources and weather. And coming out of those foggy, damp woods and seeing a gazebo with ice chests and gas cooker was the more than uplifting, it was a lesson that the trail provides. We had hiked into Fresh Grounds Leap Frog café, so called because the proprietor, Fresh Ground, sets up his trail side café for about two weeks then bounces up the trail to repeat the process, several times. 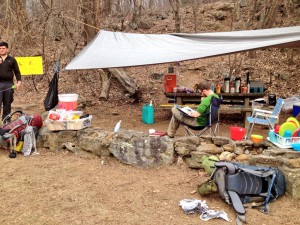 We were fed hotdogs, fruit and loads of cold juice, which I had craved. We rested and recovered and joined other hikers to talk about our challenges. We was able to use a real toilet, well I say “real,” it was a brick building with a composting toilet at the side of the car park…but it was real to me. Fresh Ground asked if we would camp at his setup as he needed to stay in town the night and collect more supplies. I didn’t relish attempting a climb of Blood Mountain that day so agreed, and this was our second bit of luck. At 6pm every evening a shuttle van arrived from Hiker Hostel to collect those hikers who got as far as Woody’s Gap but decided a thru-hike wasn’t for them. I will say that at that point I had no intent to get off the trail, although I will say later on in the hike there were times I would of, this was not one of them. However, the driver recognized us as we had stayed at the Hiker Hostel the night before we started off on Springer, and she came over to chat. I spoke with her and told her of my struggles and general suffering; this is when I was introduced to “slack-packing.” A style of backpacking I learned to smell out several miles away and something I utilized on as many occasions as I could.

My view on slack-packing was simple and I relayed it to many hikers as I progressed on the trail “My commitment was to hike the AT, at no point did I say I had to do it carrying a big pack of crap on my back!” and so endeth the lesson!!

The shuttle driver offered to come back in the morning as she had some hikers to drop off, she would collect our packs and all we needed to do was hike over Blood Mountain and collect them at the Mountain Crossing Outfitters the other side. Well, who am I to look a gift horse in the mouth? It was relief that on a rainy cold morning we saw the shuttle pull into the car park and gladly loaded our packs into the back. With less than 8lb of gear including water in my backpack brain (the brain is a detachable top section which doubles as a small pack) we set off for the days hike. It was a terrible day’s weather, rain, fog, mist, wind but after the past few days it was easy hiking without that 55lb lump on my back.

We didn’t get to see any of the views on top of Blood Mountain, we got soaked through, but we were up and over in relatively quick time and I actually felt good. 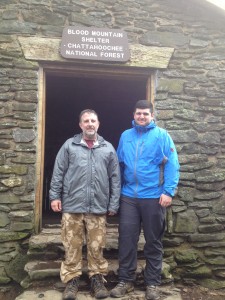 On Top of Blood Mountain

We hiked into Mountain Crossing outfitters and, as you have probably seen on the NatGeo documentary about the AT, we dumped lbs. of gear; I bought a new tent half my original tents weight and sent home 15lbs of surplus gear. My pack now at 35lb was a lot easier to deal with, not great but a lot better. The next day we headed north and continued our journey. 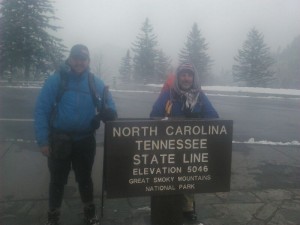 It was early March when we started to get the freezing weather and eventually snow, as we climbed higher into the Appalachians and passing into North Carolina and Tennessee. We met Fresh Ground at Fontana Dam and took our first Zero so we could collect a mail drop in Fontana Village, we was at the base of The Great Smoky Mountains National Park. I always considered Georgia as boot camp, if you passed that challenge then the first part of North Carolina and Tennessee was basic training, preparation for GSMNP; and I think I had made a fair assessment. We were hit by some pretty severe weather while hiking through the park and the terrain was hard in comparison to the climbs in the previous miles. We were to encounter snow, ice and freezing temperatures, I collapsed one morning and was lying in the snow covered ground outside a shelter; no idea why I was ill but recovered within an hour to continue. My air pad burst, preventing me getting a proper night’s sleep and our water filter froze and became useless. Just a start of some of the challenges to face us and require us to overcome. Just outside the Smokies I slipped on ice and pulled my back resulting in three days of pain before we got to Hot Springs. But despite all the challenges we were still enjoying the experience and kept going. There is a trail saying “keep on, keeping on!”

Originally I was going to do an overview of the whole trail experience. As I started to write I realized that what we experienced last year doesn’t warrant just a 1000 word blurb and be done. So, this was our first month on the trail, still on the honeymoon, still learning to travel with the trail, still learning its rhythm but still not connected to the trail. The first month is like trying to quit smoking, hard, emotional, and easy to give up trying….but you know the rewards are going to be worth it!