camPrior to the new Nemo gear and my testing of the Blaze 2P ultralight tent, I was given a tour of Nemo’s headquarters by Donald Stickney, director of e-commerce and digital marketing at Nemo Equipment, Inc.  (Note: I’m terrible at taking pictures and my camera of choice is an old, smudgy-lensed phone which, as it turns out, took some pretty terrible shots… So a lot of these pictures are directly from the Nemo Equipment website.) 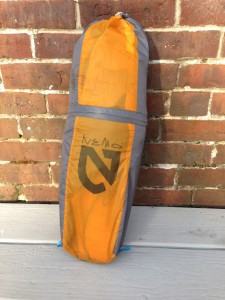 With the notable exception of this one : my own Blaze 2P leaning casually against the wall for its high school yearbook photo.

Now, here is that long-awaited write-up of the Nemo’s colorful workplace and a look at their 2016 product line:

“We won’t just make a product to make it – It needs to be markedly different from what’s in the market already,” says Donald as he shows me the entry to a 20,000-foot loft where Nemo Equipment has been headquartered since 2011. Overlooking the Cocheco river in an old brick mill building, it looks more like a dirtbag’s dream hangout than the office of an internationally competitive brand.   Bright colors and Tibetan prayer flags decorate a brick-walled space, flooded with light by ceiling-high windows. Music floats over the walls of hand-made desks and tents are everywhere, held up with ‘carpet stakes.’ A six-inch thick sleeping pad from their 2016 gear line lies inflated beneath a tester hammock to serve as a crash-pad in case it fails.

If Nemo seems like a backpacker’s pad, it’s intentional. This is a company that was started by backpackers, for backpackers – and as it has grown, the benefits of success have been passed on to the workers, who display the confidence and company knowledge of co-founders. They all seem to be on the same page – the design philosophy page of Nemo’s website, that is, where their mission is laid out: ‘Be proud of everything you do.’ 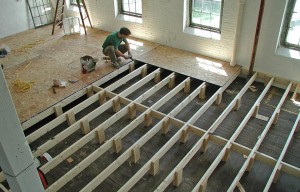 On Nemo’s website, you also can find pictures of founder Cam Brensinger single-handedly building the floor to the original design studio in 2002. It was in those dingy, cramped quarters that AirSupported™ tents were born. After Cam realized tents could be supported by air beams instead of poles, he went on to pioneer a consistently creative, lightweight gear line that quickly got the attention of larger companies and the backpacking community at large.

Rather than taking the standard route and following market trends, Nemo seems to thrive in a vacuum of eccentricity. Outside-the-box concepts are their specialty, with unique products like their Spoon™ ‘side-sleeper’s’ bags or foot-pump-powered Helio™ gravity shower winning them gear awards and recognition. Their creativity has also earned them some unusual customers.

When most people think of Nemo, they think of backpacking or winter camping, but that’s not all they specialize in.   “We make a line called Shield. We don’t really broadcast it though,” Nemo has been working on Shield since 2007 for the US Military. “They usually want lightweight but they’re more into specific solutions for what they’re doing.” 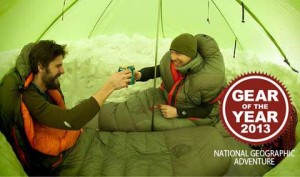 (Nemo is famous for it’s mountaineering line, which includes award-winning -40 degree Fahrenheit sleep systems like this one.)

With their trademark ingenuity, Nemo outfits soldiers with everything from wearable sleeping bags to invisible tents. “A big thing for them is light blocking – sleeping in concealed shelters,” so Nemo has to think about how to keep all the light in their tents. 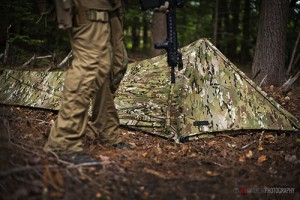 Donald leads me to a room built into the massive mill space: Cam’s office. In the corner, a lofted platform is about the size of a queen bed. “In the early days he used to have an hour-plus commute and that was where he used to crash at night.”

In the customer service area, a big black lab raises his head from behind a desk. “This is Hobie.” Named, undoubtedly, for the sailboat. Because, whether they’re sailing a Hobie Cat to Jewell Island at dawn or hiking in the Gulf Hagas region of Maine, these guys put their workmanship to the test on a regular basis. 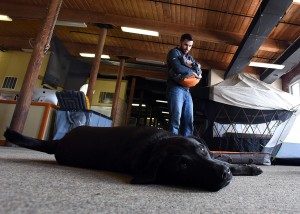 This picture of Hobie is courtesy of the Union Leader.

“Thru-hikers are huge for us.” Nemo actually demonstrates this pretty remarkably by supporting the thru-hiker syndicate. “We give gear to 10 people who do the Appalachian Trail, 10 people who do the PCT, and next year we’re actually adding the Continental Divide Trail.” Every year, Nemo equips these 20 lucky people – now 30 – with packs, sleeping bags, pads, and tents. “We don’t really talk about it a lot because it’s not really marketing we’re looking for – It’s just about getting people out to enjoy the trail.” 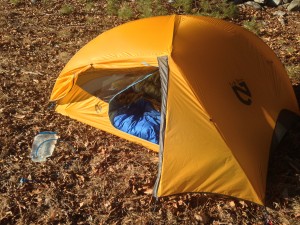 Although they’ve stayed the same at the core, there have been some big changes over the years. As the backpacking market becomes more specialized and weight-obsessed, Nemo is learning to be competitive while staying creative. “Now it’s like 2 person tents have to be 2 pounds,” Donald shows me the newer models – the Blaze 2P and Hornet 2P – designed to meet that expectation. “We’ve gotten to the point now where air beams are heavier than poles.”

The sewing area is comprised of several intimidating machines such as the leather sewer and bar tacker (for webbing). “We used to do a lot more in-house production of prototype… We still do alterations for our tents but the majority of our sewing is done at the factories that we partner with.” 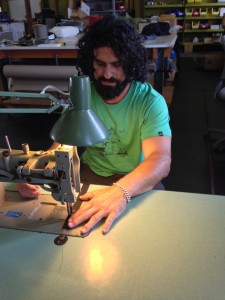 Now, the cutting table is covered with papers, but the Nemo team can’t seem to stop creating. On the wall, dozens of colorful billfolds are tacked up in a sequence. “Ditto wallets that are made out of excess material from the production of our tents,” Donald proudly explains, showing us how they used the spare scraps from their work area to create the recycled money-holders. 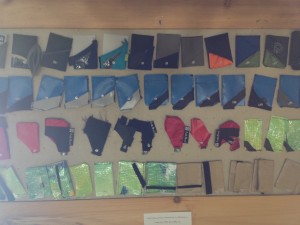 This picture illustrates both the Ditto wallet’s lengthy progression and the reason that I am not using very many pictures that I took myself.

This sort of company-wide side project isn’t unusual. When it comes to product design, Nemo’s team is hands-on the whole way through the process. Last year, their entire team weighed in on sleeping bag colors, pulling ideas from everywhere, including nature itself. “That’s how the color of our tents were actually started – the birch leaf green is actually the color of a birch leaf in spring.” 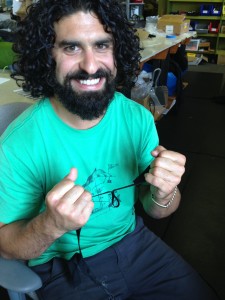 Webbing that has met the bar tacker doesn’t break.

Nemo is still innovating, still finding new markets to explore. This year they have a new bike-packing line, explains Donald as he shows me the Moonwalk™, a sleeping bag with a twist. “We’ve actually taken the tent floor and sewn it into the bottom of the sleeping bag.” The Escape Pod™ 1P bivy is a 7-ounce, air-supported bug netting system that ties around a sleeping bag to cover the exposed upper body. Only a tarp is needed to complete the 2-pound, 9-ounce combined system. With three people sharing the Apollo™ 3P tarp, bike packers are looking at a 3-pound sleep system (or, if they want to keep their bike dry under the tarp, around 4 pounds). 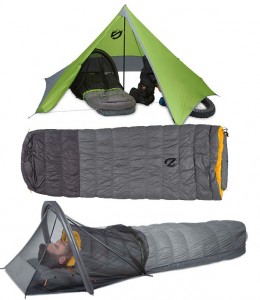 Forget bike tourists, though – A sub 4-pound sleep system is the cutting edge of ultra-light for thru hiking. With some modifications (such as inserting a sleeping pad), this could work for backpackers too.

Another turn in the labyrinth of desks brings me to the baleful eyes of Donald’s best friend. “This is Oliver,” he says, bending down to scratch the yellow lab’s head. Looking at his work area, I am again left with the distinct impression that I walked in on an artist’s loft rather than employee offices. In the words of a Nemo employee, “It’s a pretty awesome place to work.” 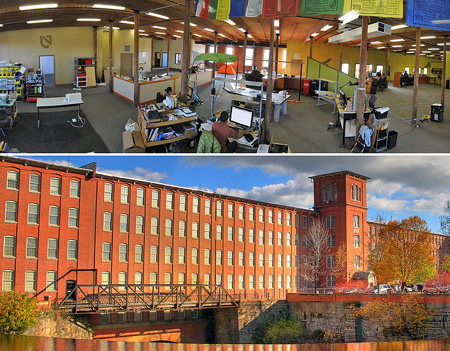 To drive this point home, the 2016 catalog is filled with familiar faces. All of the employees I met today are in it, crawling out of sleeping bags, sipping tea in tents, and rolling around on cushy pads. Even Oliver and Hobie made the cut. A grinning Donald explains, “No models, just all friends.” Laughing, he shows me an embarrassing picture of his co-worker trying out their new Fillo™ HQ neck pillow, “…We call him the sleepy badger. It annoys him, but it’s good.”

In part because of their own unglamorous beginnings, Nemo is aware of the importance of local support in a competitive backpacking market.   They sell Good-To-Go™ meals made in Maine, work out at the gym in their mill-building, and decorate with art from a local couple who has managed to make a living by drawing posters.  “They actually got married last weekend and the spent their honeymoon in the Wagontop 6p that we let them borrow.” 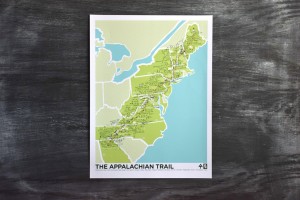 With a community focus that borders on adorable, Nemo has earned its accolades from the granite state, receiving an Innovation Rocks! Award from the NH Department of Resources & Economic Development in 2009.

So how are they pushing the boundaries in 2016?

“It’s a foot pump… there’s a one-way valve in there.” Using ‘entrainment’, the new Tensor and Vector series not only inflate by tapping your foot, but remain competitive in weight. The full-length, un-insulated Tensor 2OR mummy weighs in at only 13.5 ounces, bringing it within 1.5 ounces of the same length Therm-a-rest Neoair™ Xlite (which, by the way, was widely recognized as the lightest pad on the market in 2015).   Only time will tell if their new mats are comparable in quality to the standing lightest, but it’s clear that Nemo is doing more than tapping their feet while they wait. 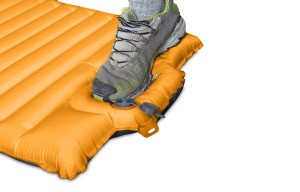 As we head further into the belly of prototyping, I get to experience the gleeful, Willy Wonka feeling of seeing how things are made and tested. There is a photography area, 3D printer for scale models, and heat chamber that super-ages materials.

“And then this is our rain chamber.” With a switch, it is pouring rain inside a massive plastic box.

Manufacturing and now warehousing has been outsourced as the company has developed, leaving them with a lot of empty room. “We’re actually downsizing our space to a smaller footprint,” Donald explains. But although their new office in the same mill building might not have as much machinery set up, it won’t lack any of the current charm. The last stop on the tour is the woodshop.

“All of those desks that you saw up front were made by employees,” Donald proudly explains – and blueprints for the new designs are in the making. Cocheco mills will be alive soon with the sound of homemade desks being hammered into their new homes – a familiar sound to the ears of Nemo staff. 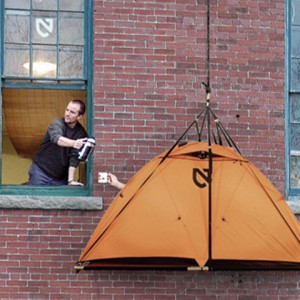 Thanks for the tour Kate Ketschek, Donald, and Nemo Equipment!