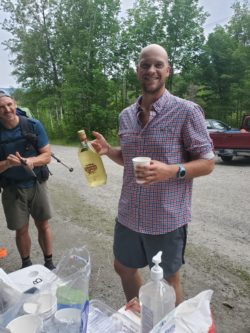 I've Been a Thru-Hiker Since 2013: Here's How Gear Has Changed

Making a Thru-Hiking Documentary - Behind the Scenes

My name is Briana DeSanctis and on November 6, 1983 I was shot out into this world with a full head of hair and a sense of adventure that still runs wild alongside me today. I grew up in Maine and spent most of my childhood playing outdoors. My parents took me camping, hiking, fishing, hunting and exploring, and that quickly became the foundation of my life. After college I spent some time adventuring in Colorado and California, and years later upon returning to Maine I began hiking even more frequently. After completing over 100 miles of the Appalachian trail in Maine on my days off from work, I decided that it was necessary for me to tackle this trail in its entirety, as a thru-hike. I returned to my job the next day with a large smile and gave my “few months” notice, and before I knew it, it was March 5th, 2015 and I was dropped off at Amicalola Falls in north Georgia to begin hiking back to Maine. I finished the 2198.2 mile Appalachian trail on September 17th and from there my thirst for adventure only grew. I was a changed human and I knew that from then on that I would spend the rest of my life thriving in a different way than many others. I traveled around the country; from Vermont to Virginia, Tennessee, Arkansas, Texas, up through New Mexico back to Colorado and all the states in between. I hitchhiked out to Ellsworth, Maine and backpacked part of the Downeast Sunrise trail in an aggressive blizzard and continued my frigid trek to the Bold Coast trail in Cutler overlooking the rocky coastline and Canadian shores. I trekked through remote, pristine territory in Olympic National Park, I canoed 60 miles of the Green River in Utah, I backpacked through the Wasatch range in knee-deep snow, hiked the North Rim of the Grand Canyon, jumped head first into my fear of heights on Angel’s Landing at Zion National Park, and spent many sub-zero winter overnights in the White Mountains of New Hampshire. In January 2022 I begin my attempt to be the first woman to solo thru-hike the official Southern route of the American Discovery Trail, spanning 5,057 miles from Cape Henlopen, DE to Point Reyes National Seashore in San Francisco, CA. The American Discovery Trail is the nation's first coast-to-coast non-motorized trail. I look forward to speaking and giving presentations in schools and communities throughout my hike to inspire, educate and empower others.