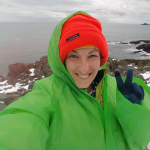 Not Your Average Thru-hike

There are a million wonderful things I can tell you about the Appalachian Trail. How many years do you have to listen to me go on and on about the daily pain and struggle peppered with the most potent little miracles to bind everything together, making one absolutely visceral experience? I’ve spent the last nearly 7 years trying to explain that phenomenal 6 months and twelve days of being completely enamored with… well, my life on Trail. With the widest and most genuine smile and a blinding twinkle in my tear-filled eyes I can paint you a vivid picture of my love affair with this Trail. It was so much more than hiking for me; it was a spiritual awakening and a reinforcement.

But it wasn’t long enough. And it never got weird enough for me.

In my imagination before beginning my northbound jaunt in 2015 I envisioned a more solitary experience than was reality. I don’t regret a hair of this entire trek. It taught me so much, and I will forever call the AT my first love, as it always will be. The relationships I formed and the connections I made on Trail were the most fortified and priceless of my entire life; mostly by circumstance, but the proof is in the pudding. My Trail family is a family I can always count on and am always willing to serve, forever. I see them from time to time for there are hundreds, and the number continues to grow as I stay connected to this undoubtedly amazing community. The Trail Provides.

After the better part of a decade spent traveling, working, trying to find my purpose, going on shitty dates (you wouldn’t even believe me if I told you), and essentially taking up space in a society of which I want no part, it was time to stop wasting more of my life being unfulfilled. I was always, always looking for the next Trail.

I do not remember the year I found out about the American Discovery Trail. However, it was the first time I had been called since the day the Appalachian Trail called me. I don’t even know how they get my number. Knowing me, I was looking for a certain Trail map of the USA I’d previously stumbled upon that has quite a few long-distance trails squiggled in their respective locations throughout the country.

One of these Trails, the longest one, stood out. It meanders from the Atlantic coast of Delaware through Ohio, splitting to form 2 semi-parallel lines heading westward, one northerly, one southerly, before rejoining in Denver and continuing through the rest of the country together until they finally arrive at Point Reyes National Seashore near San Francisco, California, with total mileage of both routes equaling around 6,800 miles. Now, this could be a real undertaking! In the way that I do, I began to research.

It was like doubling a recipe, then adding more. At 231% of the Appalachian Trail, I already knew that my (southern) 5,057-mile route on the American Discovery Trail would probably take me a year or so to complete as a thru-hike. The amount of money I saved would also have to at LEAST double. How much hungrier would I get? How much more gear would I need to purchase? Can I set some sort of record? What’s the deal with this Trail? I dug deeper.

Turns out, choosing to thru-hike a much younger Trail has its share of pros and cons, and the way you see ’em depends on low much of a lunatic you are. Barely entering into its thirties, the American Discovery Trail could be a great-grandkid of the century-old AT. Most people haven’t heard of the American Discovery Trail yet they live right on it. Even fewer attempt to hike it. Most of the people who have, usually push a hiking cart or stroller of sorts which sometimes leaves them no choice but to detour to the alternate routes more suitable for their wheeled vessels when the original route gets too difficult to support this style of trekking.

I had briefly (very briefly) entertained the idea of pushing a hiking cart. But I am a backpacker. I want to walk on trails as much as possible. When the official route takes a road, that’s one thing. But to give up seeing (what I feel) is the most beautiful part of the trail (Colorado, Utah, Nevada) just so I can carry more comfort items? I’ll sacrifice comfort for hiker trash fashion. I’ll have enough just to keep my OWN ‘chevrolegs’ from falling off, let alone a bunch of rickety wheels. What happens when your shit breaks down in BF Egypt? You can’t LEAVE it. You can’t CARRY it. You’re not going to have service for many, many miles and may not see another human for DAYS. Even on an alternate route, you’re still gonna go through some extremely remote areas. I’ve got enough responsibilities as it is.

Reaching out to current backpackers of the American Discovery Trail for advice proved to be mostly futile as soon as I realized that none of these guys have ever attempted any other long-distance Trails, and SOME of them hadn’t even hiked before they decided to take on this doozy of a journey! This blew my mind, but you know what they say… Hike your own– I know, I know. I’m actually compiling an article on that specific topic because I don’t know why someone might pick this Trail for their first long-distance hike over a more well-known, more easily researched one with navigable, cohesive maps and… maybe shelters? More on that another day.

Basically what I’m trying to tell you is that this, my friend, is not your average thru-hike. I will backpack through several cities, towns, rural areas, farms, desert, mountains, beaches, you name it. I look forward to everything; the good, painful, hungry, scary, lonely, breathtaking times. This is why I am choosing to hike this Trail. I will respect it and learn from it. It will break me down and build me up. It will piss me off and surprise me. This is the American Discovery Trail, after all. I’m looking to discover what this Trail has called me to find: a deeper meaning of myself.

My name is Briana DeSanctis and on November 6, 1983 I was shot out into this world with a full head of hair and a sense of adventure that still runs wild alongside me today. I grew up in Maine and spent most of my childhood playing outdoors. My parents took me camping, hiking, fishing, hunting and exploring, and that quickly became the foundation of my life. After college I spent some time adventuring in Colorado and California, and years later upon returning to Maine I began hiking even more frequently. After completing over 100 miles of the Appalachian trail in Maine on my days off from work, I decided that it was necessary for me to tackle this trail in its entirety, as a thru-hike. I returned to my job the next day with a large smile and gave my “few months” notice, and before I knew it, it was March 5th, 2015 and I was dropped off at Amicalola Falls in north Georgia to begin hiking back to Maine. I finished the 2198.2 mile Appalachian trail on September 17th and from there my thirst for adventure only grew. I was a changed human and I knew that from then on that I would spend the rest of my life thriving in a different way than many others. I traveled around the country; from Vermont to Virginia, Tennessee, Arkansas, Texas, up through New Mexico back to Colorado and all the states in between. I hitchhiked out to Ellsworth, Maine and backpacked part of the Downeast Sunrise trail in an aggressive blizzard and continued my frigid trek to the Bold Coast trail in Cutler overlooking the rocky coastline and Canadian shores. I trekked through remote, pristine territory in Olympic National Park, I canoed 60 miles of the Green River in Utah, I backpacked through the Wasatch range in knee-deep snow, hiked the North Rim of the Grand Canyon, jumped head first into my fear of heights on Angel’s Landing at Zion National Park, and spent many sub-zero winter overnights in the White Mountains of New Hampshire. In January 2022 I begin my attempt to be the first woman to solo thru-hike the official Southern route of the American Discovery Trail, spanning 5,057 miles from Cape Henlopen, DE to Point Reyes National Seashore in San Francisco, CA. The American Discovery Trail is the nation's first coast-to-coast non-motorized trail. I look forward to speaking and giving presentations in schools and communities throughout my hike to inspire, educate and empower others.