How to Bikepack Across Ohio on the Ohio to Erie Trail

Bikepacking the Ohio to Erie Trail

Length: 326 miles
Location: The trail runs from the Ohio River in Cincinnati to Lake Erie in Cleveland
Trail Type: Out and back or shuttle
Scenery: A variety from urban to riparian corridor to rolling farmland and back 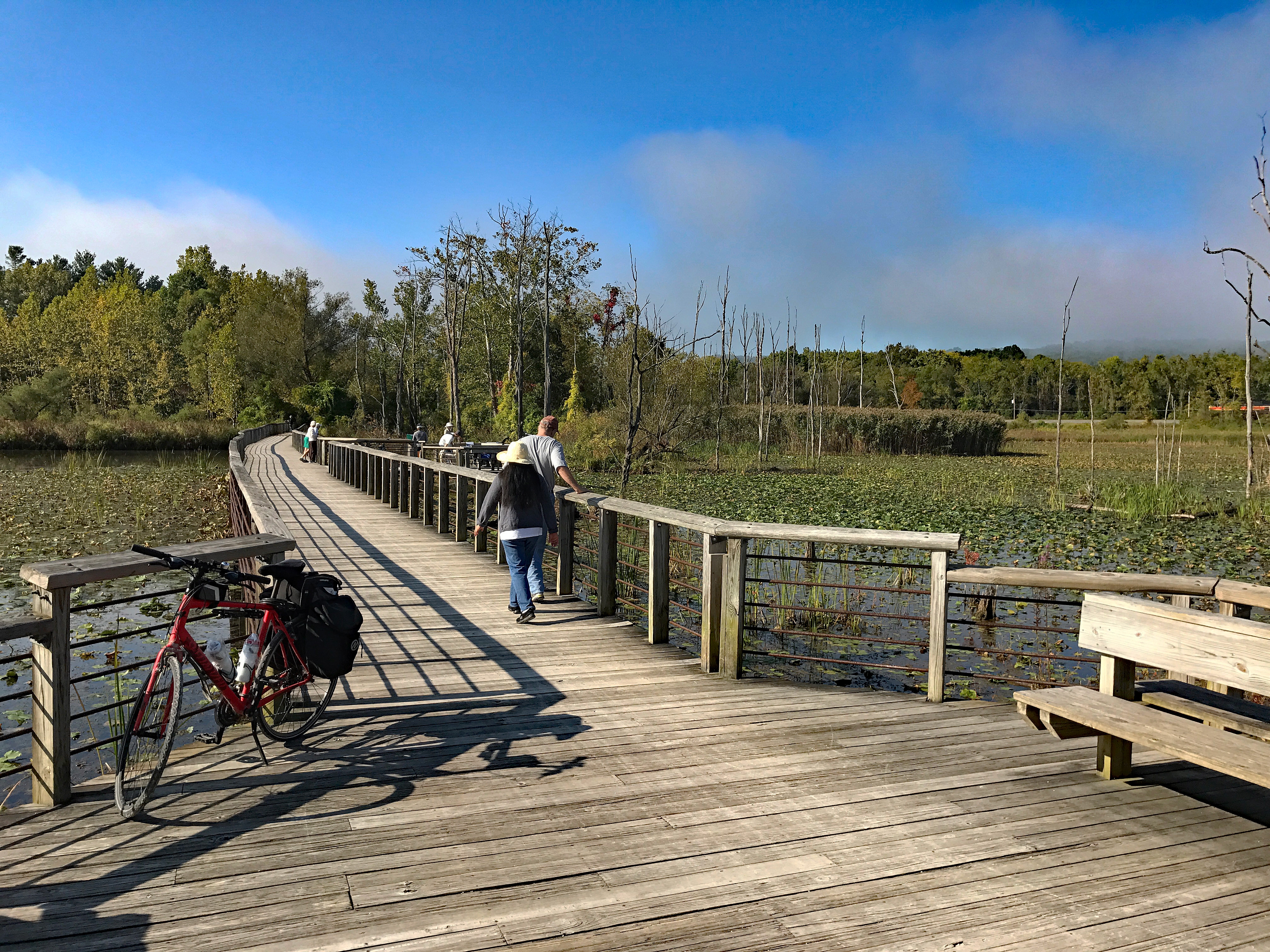 The Ohio to Erie Trail (OTET) crosses the state of Ohio on a diagonal, from Cincinnati in the southwest, through Columbus and on through Akron and Cleveland. The vast majority (app. 85%) of the mileage is on separate recreational trails, which are mostly paved. Considerable portions of the route are within parks such as 50+ miles in Little Miami State Park and 20 miles within Cuyahoga Valley National Park. Aside from some short stretches within the cities of Cincinnati, Columbus, and Cleveland, the on-road sections tend to be on lightly traveled country roads.

There are camping options along the OTET, many right on the trail. For those “credit card” touring, hotels are relatively convenient.

A high-end bike is not required. Just remember that it has to handle both paved surfaces and packed gravel. Most lightweight camping gear transitions nicely to being carried on a bike equipped with panniers. Biking with a full backpack is certainly doable, but just as certainly unpleasant. I am able to fit all my needed bike/camping gear in a set of rear panniers. My tent poles just fit, but if not, they could be strapped to the rear rack. 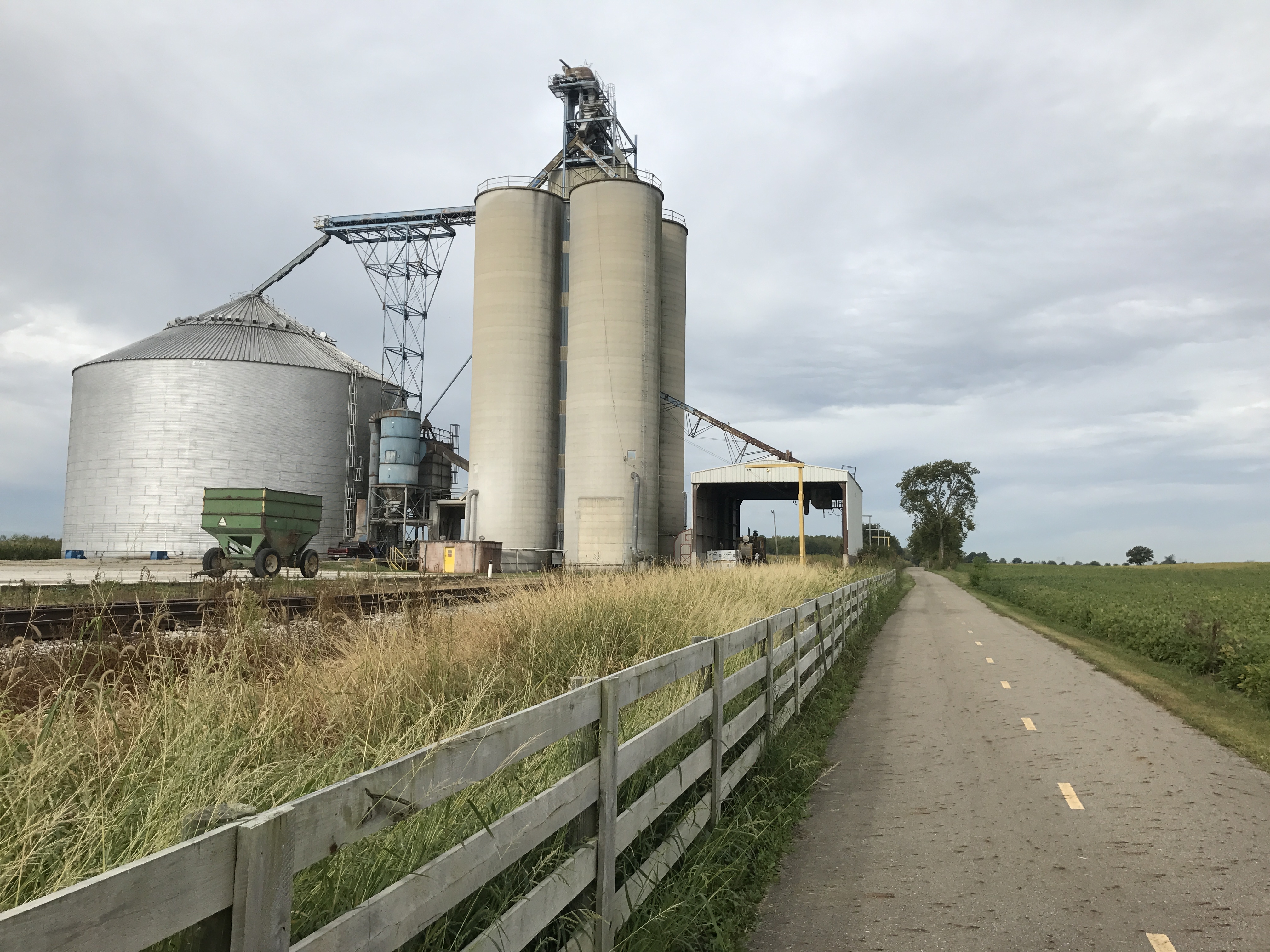 Long sections of the trail, especially the southern portions, are on paved rails to trails conversions and have less than a 2% grade. The extreme northern portion is along an old canal towpath and pretty flat as well, with a surface of crushed limestone. In between, some of the trail, and the road sections, are gently rolling, but there are a few challenging hills. Wind, noticeable on a bike, generally, but not always, blows southwest to northeast, helping the traveler heading in that same direction.

The Southern Terminus is right by the Ohio River in downtown Cincinnati. Interstates 75 and 71 both run close by. Parking options abound in the area. In addition, bus service with bike racks is available from the Cincinnati/Northern Kentucky International Airport in Kentucky, across the Ohio River from Cincinnati.

The Northern Terminus is in Edgewater Park on Lake Erie. Interstates 71 and 90, as well as US Rt 20, run close by.

Shuttles are available for part or all of the trail at reasonable rates. For 2019, the rate to shuttle a bike (and rider) the entire length of the trail is $125.

Why Bike This Trail 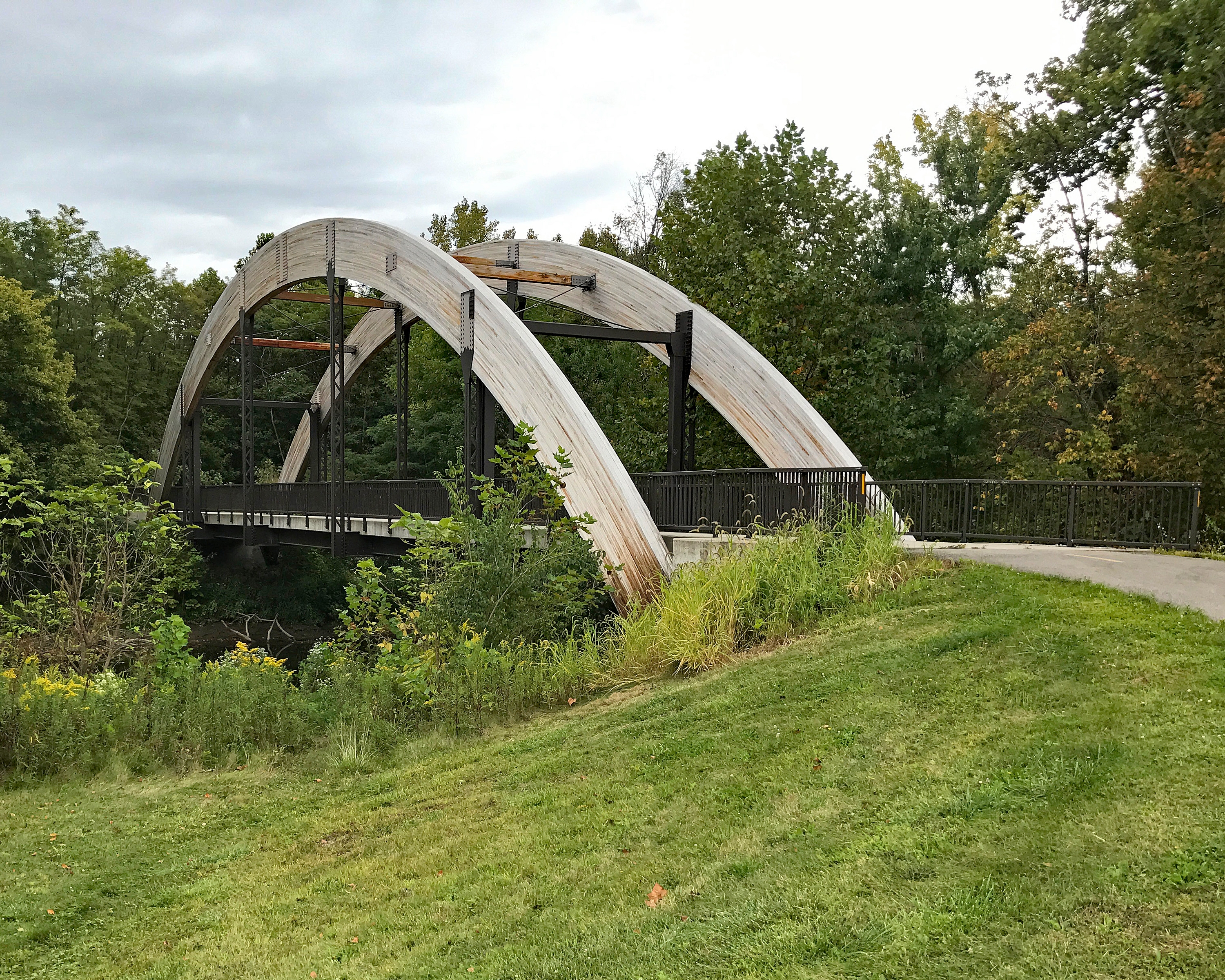 One of the newer bridges: over Alum Creek.

The OTET is a great trail to try out bike touring and travels along a surprisingly scenic route. Logistics are relatively straightforward. The route is well marked and there is no need for long carries of food or water. There are ample opportunities for camping, hotels, restaurants, groceries, and (more than enough) bars along the way. There are even a few bike shops right on the trail in case there are equipment needs. The numerous small towns along the route really seem to cater to bikers.

Much of the early mileage is alongside the Little Miami River, a state and national scenic waterway. Additional stretches are along other picturesque waterways, including Big Darby Creek, the Scioto River, Alum Creek, Kokosing River, Tuscarawas River, Ohio & Erie Canal remnants, and the Cuyahoga River through its namesake national park.

Picturesque rolling farms surround much of the rest of the route. In northern Ohio, plan to share sections of the trail with Amish horses and buggies.

The history of the area is on full display, not only in small town squares but in signage and exhibits along the trail detailing past uses such as canals, railroads, manufacturing, and more. 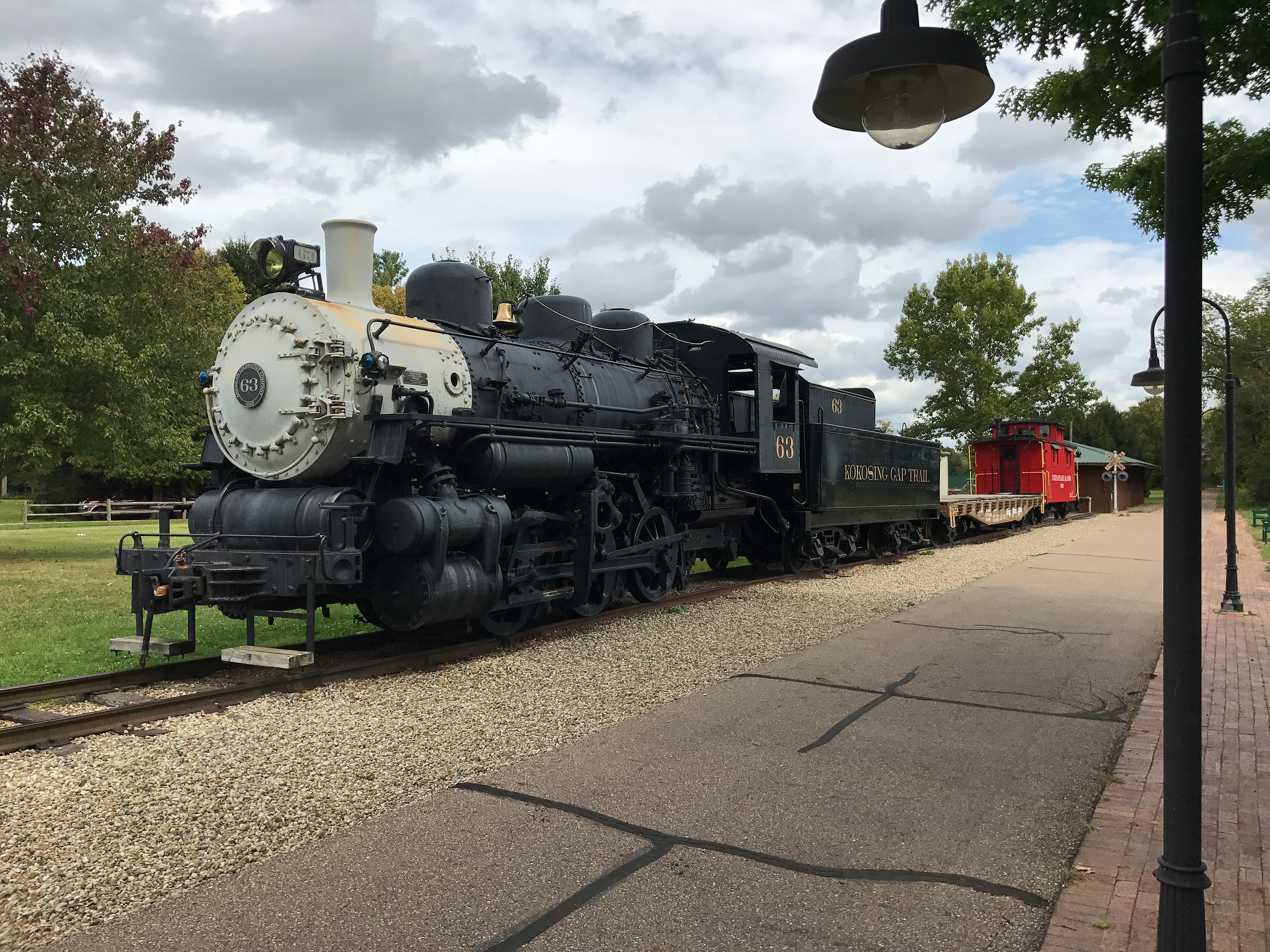 The weather in Ohio is typically warm enough to ride the length of the trail from April through early November. September and October temperatures are often in the sweet spot (50-70) for biking. It took me six days to ride the entire distance. Getting six days in a row without rain would be tough. Bring rain gear. 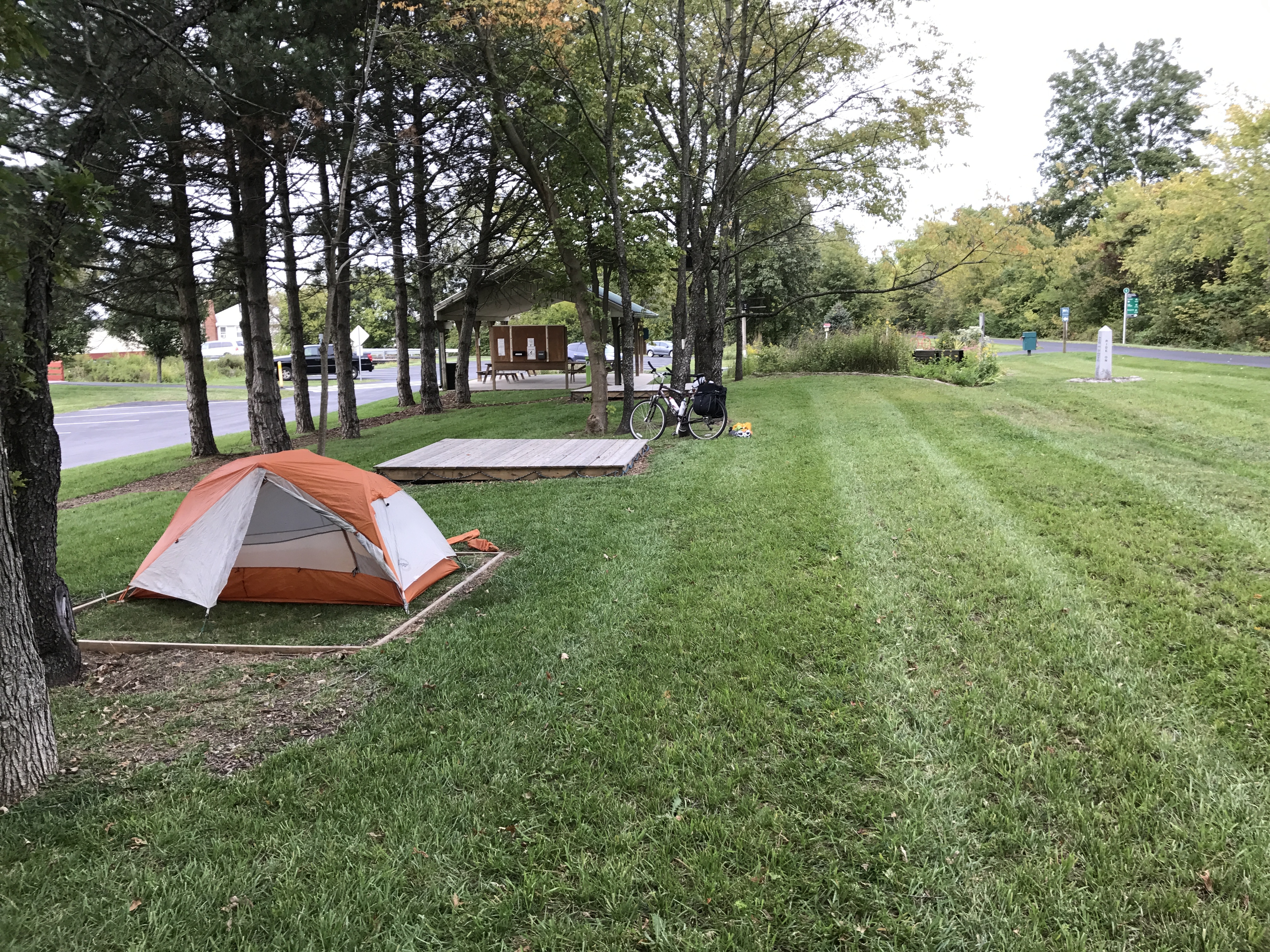 This is not a wilderness trip. Most camping is at actual campgrounds along or near the trail. However, there are a few spots along the trail where it is allowed to pitch a tent for the night; no services, no charge.

From Cincinnati, between 40-48 miles in, there are three campgrounds operated by canoe liveries. At the city of London (mile 100) you’ll find a beautifully maintained camping area/restrooms right on the trail. There’s no charge, but feel free to use the donation box

Near the halfway point of Columbus, camping gets tough.  There are however, hotels near the route in Westerville, just north of Columbus. Farther north there are private campgrounds near the trail at miles 180 and 190 as well as a free primitive spot provided by Knox County Parks near the Bridge of Dreams and mile 200. There is also camping (and multiple hotels) near the trail at Millersburg (mile 220). From Massillon north, there are several options, including a couple of primitive sites right on the trail in the Akron area. Most camping options are listed at the OTET website.

There are streams along much of the route, but I was able to find plenty of water and other fluids along the trail at drinking fountains, fast food joints, and gas stations. No filtering required.

Since the ride rarely takes more than ten miles between towns, I never carried more than a few snacks with me. Nearly every town I passed through contained a restaurant, bar, or grocery. Be prepared for funny looks if you take your bike through a drive-through, however. 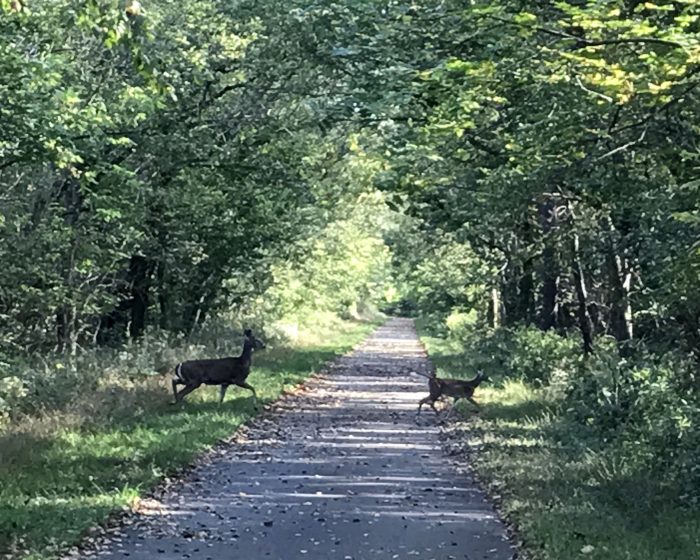 If you’re looking to expand your backpacking experience, and still like the idea of a longer linear journey, a bikepacking trip may be for you. The Ohio to Erie Trail is a great option to start with. The route is well marked with plenty of support along the way. The relatively flat 326-mile length is doable in a week or less, even for a 60-year-old without a ton of biking experience.

The trip has a little something for nearly everyone. Besides three major cities, there are numerous small towns, considerable miles in parks, and countless farms that create a surprisingly scenic and interesting ride.

Ohiotoerie.org is a great place to start the planning process. If you decide to try it, they sell a complete set of maps for $15. 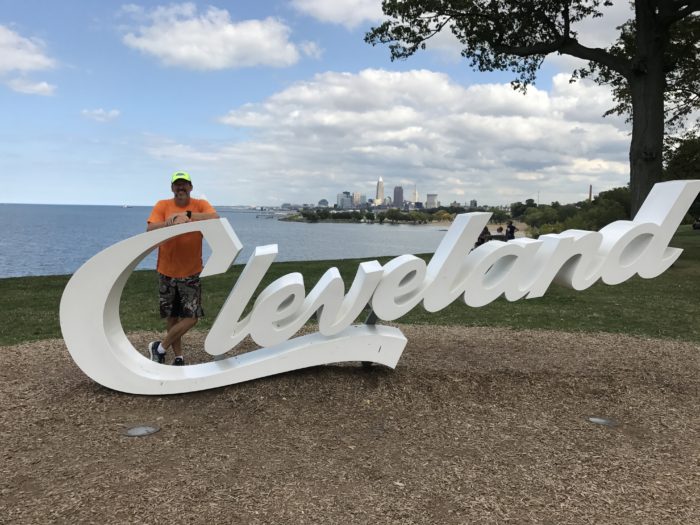