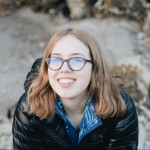 My Evolving Gear List: How my Pack Lost 10 Pounds

When I began backpacking, about a year and a half ago, my base weight was around 23-25 pounds. I’m saying around because I never actually weighed my pack. I spent plenty of time looking through gear list after gear list, and on weekends I perused REI stores. Apparently, I didn’t listen to people who said that the lighter my pack is the happier I’ll be. On my first trip I realized how unnecessary, at least for me, it was to carry half the things in my pack. 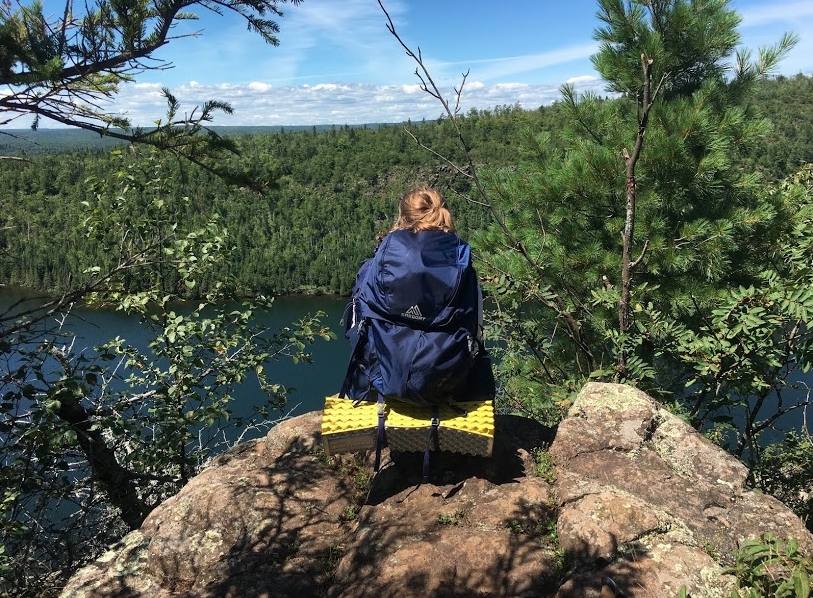 Let’s Start with My Big Three

I was packing everything away in a Gregory Deva 70 liter pack. I found it at an REI garage sale and my parents bought it for me for my 17th birthday. It had won the Backpacker’s Choice award in 2016, so I trusted it when I took it home. I wish I had looked into different packs, especially ones made by cottage companies. It weighs a whopping five pounds, so I decided it had to go after my first few trips. I sold it for $235 in April and upgraded to a ULA Circuit for the same price. I am thinking of selling the Circuit before my thru-hike and going lighter with a Zpacks Arc Blast, but we’ll see if I get around to that.

I was using my dad’s old two-pound something sleeping bag with a -15 degree rating made by some lightweight Swedish backpacking company from the 1990s. I returned that bag to him when I purchased an Enlightened Equipment Revelation 0 degree (xshort, regular) from their warehouse last summer. I’m super happy with it. I use it almost every day around the house. Right now I’m cuddled up in it on the couch. Plus, Enlightened Equipment is based in my home state of Minnesota. Nothing like buying local. 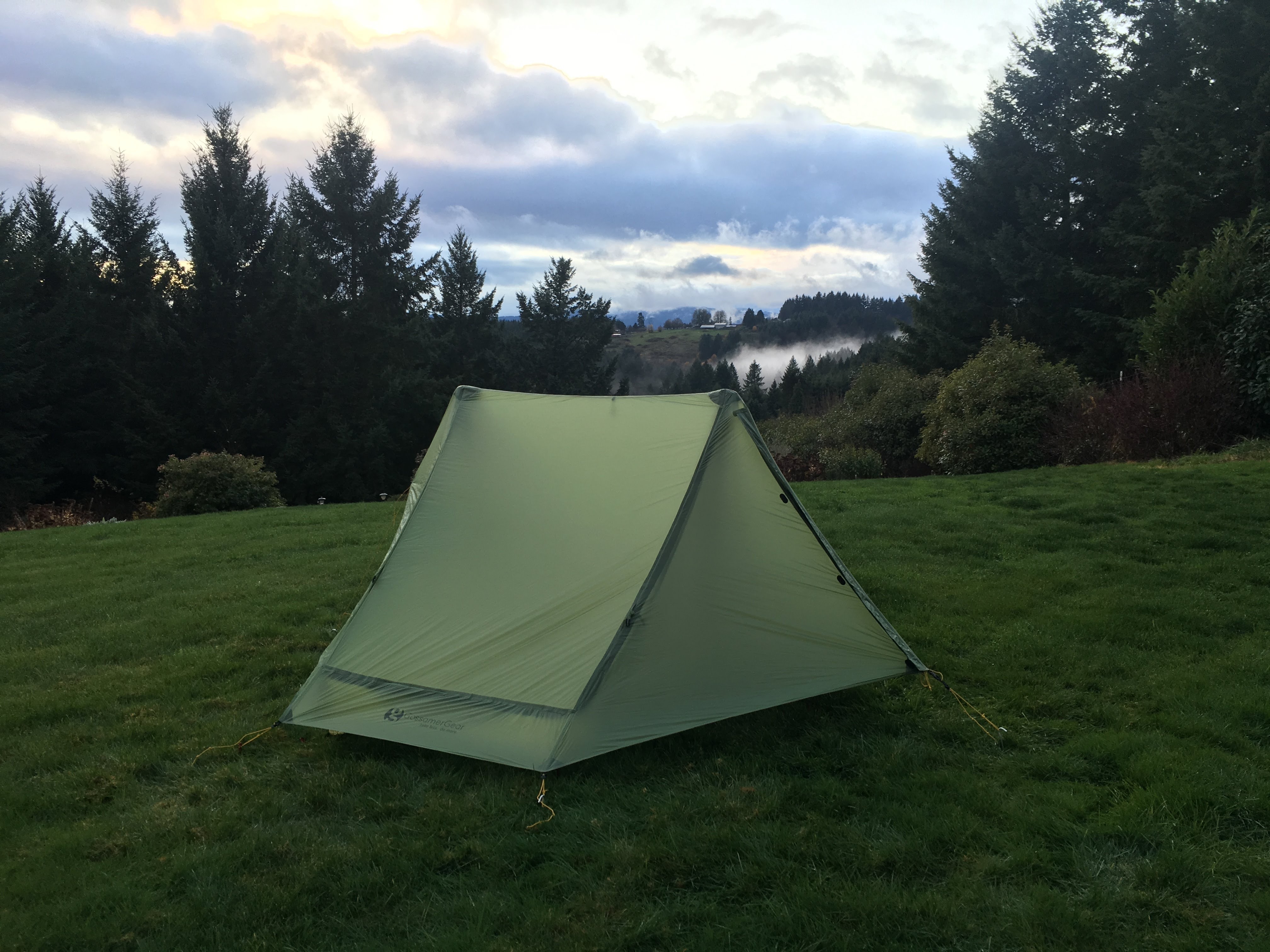 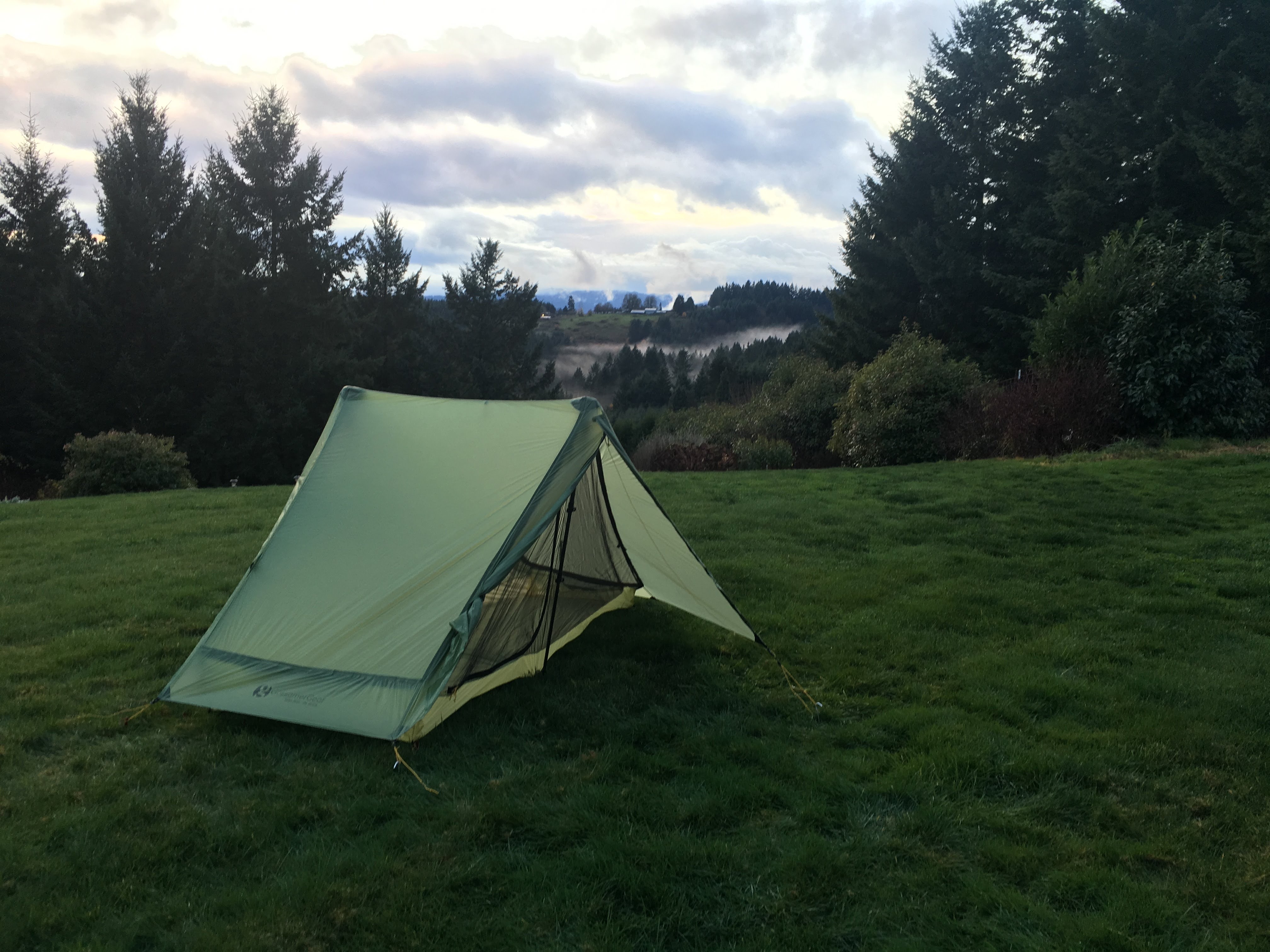 I bought a Big Agnes UL 2 Copper Spur just a week before my first trip. I got it for under $300 on eBay, which was a price that was hard to find for that tent at that time. It works well, but weighing 44 ounces makes it a little heavy in terms of backpacking tents in my opinion.

I bought a Gossamer Gear The One during their Black Friday sale for $269. I’ve since tried it out during a couple of wet November nights in Oregon, and it held out fine. The condensation in the tent was very annoying. I’m hoping that if it is not raining and I keep the doors open that it won’t get so bad. It doesn’t take long to set up and it is pretty spacious for a one-person trekking pole tent. I’m going to bring it on the PCT, and keep the Big Agnes for shorter trips.

I bought a Sawyer Mini Squeeze. After ten days of using that, I quickly decided to switch to a larger version that I could drink directly out of and avoid the whole squeezing part of it. For some reason, I also brought along Aquamira as a backup. I will only bring a Sawyer Squeeze on the PCT.

I decided I needed an entire wardrobe of clothes: three activewear shirts, a heavy fleece, a puffy, a vest, a raincoat and rain pants, three pairs of hiking shorts, one pair of hiking pants, pajamas, four or five pairs of underwear, two sports bras, along with three or four pairs of socks. It’s safe to say that was too much. I now only bring one hiking shirt and shorts, pajamas, two pairs of socks, two pairs of underwear, one sports bra, rain gear, and a nice puffy. I’ve changed my rain gear to consist of a Frogg Togg rain jacket and Marmot Precip Rain Pants.

I bought a pair of Saucony Peregrine 5 for hiking and a pair of Crocs to use in camp on my first backpacking trip. As for the PCT, I am not sure yet. I’m leaning toward no camp shoes and my trusty pair of Chacos Z1 for the desert, Northern California, and Oregon. I’ll wear my Altra Lone Peak 3.0 for the snowy bits of the Sierras and Washington. Two Trek articles have led me to this decision (found here and here). After several hikes in the sandals, I believe they are a more sustainable and cheaper alternative to popular trail runners that rip and die after 500 miles.

I had a large, “quick-drying” REI backpacking towel that I used on the first day and that didn’t dry out until I got home. Felt pretty useless.

I brought not one, but two Anker 20000mAh portable chargers. Each one lasted about seven charges for my iPhone, so this was crazy. I only carry one now. I also brought an Anker PowerPort Solar Charger, which didn’t really help much because it was very rainy and cloudy on my trip. The days I did have sun I was usually under the canopy.

I brought my ENO Sub 7 hammock on my trip as well. It ripped on one of the last days, so I returned it and haven’t gotten a new lightweight hammock since. It was nice to just hang out in though.

So many stuff sacks. I had a Sea to Summit Trash Dry Sack that I stored my food and trash and other smelly things like toothpaste in. I used two eight-liter Sea to Summit Dry Sacks for my sleeping bag and my clothes. I’ve swapped those out. My sleeping bag will likely be loose in the bottom of my bag. I’ll be using my mosquito bug net for my extra clothes. I’m grabbing a food bag from Zpacks to use for the things I’ll be nibbling on.

I brought the trail guide to the Superior Hiking Trail with me on my first trip. I wanted to be able to see what I had going on for the next day in terms of water, elevation, etc. On that specific trail, it isn’t really necessary because there is a water source at least every few miles and the elevation isn’t that extreme since it’s in Minnesota. It is kind of just constant up and down. A lot of trails now have maps available on apps, so that’s what I’ll be relying on this spring.

All over I have taken roughly 170.63 oz off my pack weight. That is equivalent to 10 pounds, 10 ounces! I don’t feel like I need to bring all of this stuff anymore. I am more comfortable with my ability to support myself in the woods, so Mom please stop trying to give me more layers.

Hey, I'm Liliana. After 18 years of exploring the north shore of Lake Superior I decided to move cross country to Portland, Oregon. I left Minneapolis with my 2003 Honda Civic and spent the summer visiting national parks along the way. That trip reminded me how spectacular America's wilderness areas are. I'm so glad I get to continue exploring them in 2018 on the Pacific Crest Trail.