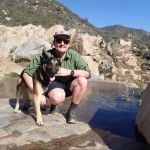 My name is Will. I live in sunny and heavily developed Orange County, California. I’ll be hiking Pacific Crest Crest Trail this year. I’ll start in the middle of March with my dog Duke or George Hayduke (Edward Abbey reference, not a Hayduke trail reference) if he’s snagged food from the table again.

Most of my hike will be by myself. Duke will section hike roughly 1,000 miles of PCT with me. I don’t feel it’s responsible to have Duke in the Mojave Desert sections or the Sierra. The Sierra Nevada is an incredibly sensitive ecosystem that sees thousands of pairs of feet a year. Duke has been into the Sierra many times (20 Lakes Basin is dog-friendly and an awesome multiday hike) so he’s not missing anything. The Mojave Desert is hard on humans and impossibly hard on dogs. When I adopted Duke three years ago I promised him that I would always keep him safe and make good decisions for him. Pushing him across the Mojave isn’t a good decision and isn’t safe for him.

Some background on myself. I am 32. I went to college late after kind of floating for sometime and finally embraced the outdoors after an ecology class at Orange Coast College. This isn’t to say that my life before this was indoors by nature. I grew up going to the Sierra, where I’d fly fish and hang out with my family. I would very rarely visit the outdoor world unless I was on a mountain bike or fishing. Now it’s all I want to talk about. After Orange Coast College, I moved to Humboldt County (yes, that Humboldt county) and got my degree in environmental  science with a focus in policy. I currently work as an environmental compliance manager for a large property management company. I will be leaving this job and not returning post PCT. Most of my outdoor knowledge comes from exploring the first 600 miles of PCT. The Cleveland National Forest is my second home. I love the scrub oaks, the live oak groves, and hoping that noise in the bush was not a mountain lion. It’s my favorite to take people from Orange and LA counties and put them deep in the Cleveland and then remind them that this in fact is an hour from 20 million people. I’ll post photos for you before I leave for PCT. Locations, though? You’ll have to put feet on the ground and seek them out. Its the best way to visit the Cleveland, get lost and hope nothing eats you.

Now about the true star of the show. Duke.

Duke is a purebred German Shepherd. He’s roughly 4 years old. I adopted him October 22, 2017, from Westside of Los Angeles German Shepherd Rescue. Duke was picked up as a stray in Bakersfield, California. Eventually he was pulled by the rescue from the Kern County shelter. He was actually never officially taken into the rescue as I adopted him the day he was dropped off. Duke was obviously not an outdoor kind of dog. I think he had been bought as a puppy and then grew into a fairly active and intelligent dog that overmatched his first family.  The first time we went to the forest in Humboldt County, he lay on the ground and had to be dragged along. Needless to say I was a bit concerned. Duke has since come out of his shell but it was a lot of work and a lot of patience on my end. We picked hidden places to backpack in Humboldt County, probably a terrible decision if you’ve ever seen the Netflix documentary series Murder Mountain. Duke has fished with me on hundreds of rivers, I think in 2018 we fly fished together something like 200 days.

Duke’s first thru-hike was the Lost Coast Trail, which is famous for tearing apart dogs paws due to the grit of the sand and rocks you walk across. Duke never once had issues with his feet. That trip put the PCT with a dog thought in my mind and our following trips have done nothing but push that thought to front of my brain.

I’ve certainly received a significant amount of pushback for posting in online forums that I backpack with my dog. It’s a staunch reminder that Duke and I are ambassadors for people who backpack and day hike with their dogs. Being this kind of self-imposed ambassador has made me very aware of his behavior. Duke is a quiet, well-mannered dog. His only downfall? Fetch and his love for sticks. If you come across Duke on trail he will be carrying a stick, which will be dropped, and he will demand that you play fetch with him. Otherwise you don’t exist to him and he just wants to keep on walking. He’s very friendly with other dogs but doesn’t have time for them on trail; i’ts almost as if he knows his mission is to get from one camp to another on trail. His favorite trail snacks? Dead spawner salmon, and Del Taco french fries.

In my following updates I’ll give a better breakdown of what it means to backpack with a dog.

Thanks again for reading.

My name is Will. I am a 2020 Thru Hiker on the Pacific Crest Trail. My dog George Hayduke aka Duke, will be hiking about 1000 miles of PCT with me this year. When I'm not hiking I enjoy fly fishing, mountain biking, walks on the beach and my sign is scorpio...