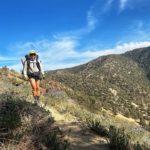 I’ve written 3 posts since hitting Kennedy Meadows South in late April 2022 and never truly introduced myself or my wife. We’ve simply been caught up in surviving the High Sierras. But… now that we are in Northern California with a little bit of breathing room, it’s time to tell you who we are and the story of our journey out here. Each new installment will be a chapter, so look out for those as we head northward up the trail.

So, without further hesitation, my name is Wesley and my wife is Marie Black. Of the two of us, I do the blogging for The Trek, but she is forever woven into my life and stories. Many of my posts will involve, if not revolve, around the two of us and our dynamic/interactions on trail. 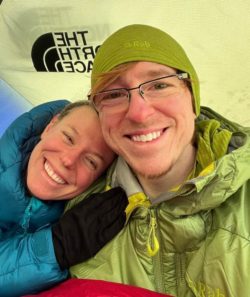 I’m a red-headed nerdy guy that wants to be a Viking, and she’s a beautiful, strong brunette with hair down to her lower back (I love it). My background is in science. Her background is in musical theatre. We both love coffee (that felt important to mention). We want 2 dogs and 2 kids someday, but not just yet. Do we want a white picket fence? No. Do we want the American dream? Nah. We want OUR dream, which looks like travel, food, beer, wine, books, laughter, love, nature, a tiny home, a sustainable garden, pushing our bodies to their physical limits, yelling obscenities into the air during the middle of a hard race, taking our kids on a thru-hike, perfecting our mountaineering skills, and sitting on the couch together at night to watch Netflix while eating Shake-N-Bake chicken with Caesar dressing on the side.

To explain a bit about us- we met during the heat of the COVID-19 pandemic in May 2020 at a McDonald’s parking lot in Atlanta, GA. Our first date was a hike up to a waterfall followed by a salvo of pizza, beer, and laughs. After not “being able” to put a bandage on her own hand over a small cut following the hike, I did my civic duty and helped her. It was a ploy to hold my hand. It worked. I was all about her.

Both in our 30s, we’d been around the block in the dating game, so we were playing for keeps. Three months later, we were engaged on Mt. Rainier during a summit attempt (which we had to call after reaching Camp Sherman for safety reasons). I strapped a GoPro to my head in a snowy privy, pulled the ring from my wool Darn Tough sock, got on one knee atop a glacier, and asked her to marry me while she was mid-chew working on her oatmeal. Her first response was, “are you doing this right now!?!?!” followed by a loud, “YES”! 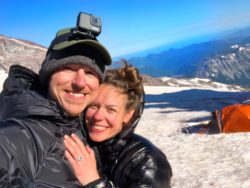 At the time, we both lived in GA, branching out to Alabama, North and South Carolina, and north Georgia for hikes and ultra runs. Of the some mind, we both wanted a small wedding in the mountains of NC, so we found a venue overlooking the mountains we know, love, and sometimes curse at. We were married on November 14, 2020 with Lord of the Rings quotes in our vows and a custom cake fashioned after Mt. Rainier for dessert. 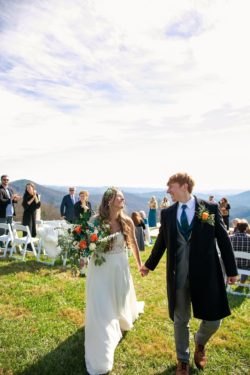 The honeymoon was in Colorado. We went and fell in love with the jagged mountainous landscapes, the pink flaming sunsets, and white blankets of snow. 3 months later (there seems to be some odd trend with the number 3) we’d sold what we could and loaded our cars for the move to CO. We’d moved to the largest outdoor playground (in our opinion) on Earth.

Marie had me hooked on ultra running shortly after we met in 2020, but we both shared a natural love for hiking. Her hope had been to do a long-distance hike since childhood- prompted by a television program on the Appalachian Trail while visiting her Nana and Papa in Florida. Ironically and sadly, her Nana had a cousin murdered on the very same trail, so she made Marie promise not to do it or any other long hikes unless it was with her husband. She kept her promise.

Queue…the husband who comes in also with a love of hiking and dream of doing a long-distance hike. Blessed with a phenomenal job opportunity in CO that could support the two of us, everything Marie made went into our savings account. As the savings slowly accumulated we were able to start having conversations of “what if” and “how about” regarding a big thru-hike. On one random night over dinner and a bottle of wine, we made the call- we would hike the PCT. Our choice was an easy one. We’d lived by and traveled many of the AT routes of the southeast since it was in our backyard, and we simply wanted something different. The CDT seemed to be a harsh environment best suited for an experienced thru-hiker. The PCT was the perfect blend of terrain diversity, active hiker/trail angel community, and just downright gorgeousness we wanted for our first. With that being settled, the planning began.

Marie works in the film industry as an AD- an assistant director whose primary responsibility is to plan, organize, time, and execute the flow of each day on set. Thus, she chose to work on our scheduled itinerary for the trail. She concocted a massive iPhone note with each day, town, resupply, and appropriate info. It’s drool-worthy and still saving us out here on trail as we speak. We are almost exactly where she predicted we would be in CA.

I work in Public Health, where the primary mission statement is to “prevent.” I first worked as a health inspector, and then as a manager in the communicable disease world. Setting people up with the tools and education to prevent injury/illness is what I do for a career. So, I took on the task of gear guru, ensuring we had all that we needed to survive, remain healthy, and even be a bit comfortable.

We both worked on gathering massive amounts of ramen, candy, junk food, dehydrated meals, and “healthy” snacks to cram into our 10 mail drops. We became best friends with our local post office clerks as well…but only after we’d gone through the stresses of the PCT permit lottery system. 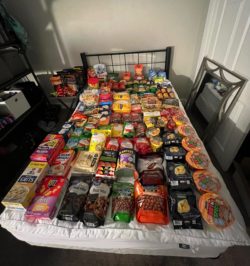 We were devastated when we didn’t snag our permits in Nov 2021 so had to face the reality we may not get one. In only 1 hr. of going live, the lottery ended… not a single permit for any day March 1-May 31…out of 35 issued permits a day…3,220 permits went to other hikers. The hope that we’d both get one come the second lottery round in Jan 2022 seemed like a far-away dream so we began exploring individual permits for the journey. As fate would have it, however, January blessed us both not only with permits but with permits for the same day (even married couples need separate permits) and the exact date we wanted…March 6, 2022. Months of stressing about alternatives and possibilities of no hike suddenly melted away alongside the snow just outside our window.

We celebrated having our new shiny permits and began selling everything we’d amassed in the last year of living in CO. Literally, we sold everything- furniture, unnecessary gear, and our cars. We rented an apartment and were able to swap the lease over to Marie’s friend who had fortuitously just moved to CO and needed a roof. After giving notice to our employers, the bulk of the adulting was done.

As the weeks closed in and March 6 approached, our apartment emptied and became a staging area for what looked like a soup kitchen. Food, zippy bags, and boxes lined the floors and all flat surfaces, buffering the echoes of an empty apartment and the memories we’d made there. 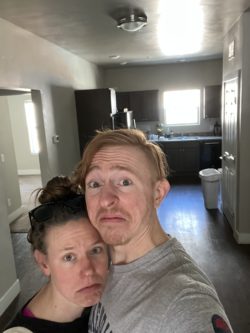 It was bittersweet as her friend moved in and we transitioned out. Closing the door to our cozy apartment for the last time, we headed down the mountain towards Denver, making sure to stop by our favorite breakfast spot in Empire to snag a breakfast burrito and lattes.

Marie’s second parents, Bob and Brenda Duncan, live in Centennial and are true gems. They offered to let us store anything we hadn’t sold in their basement and to stay with them as we prepared one last time for our March 6 start. Did I mention they also wanted to bless our innocent hiker hearts with an all-expenses-paid trip to San Diego and Campo? We chose our start date based on the hopes that the desert would be cool, and that we’d be hitting the “secret season” of the Sierra, avoiding the thaw. Given this, our backpacks were positively crammed to the brim with cold-weather gear and would have broken any hook scale. We were truly concerned about them fitting in the overhead cargo bins of the flight. Into the late hours of the night on March 3, we were trimming tags, repacking, and triple-checking everything we had. Going forward, everything we needed to survive and thrive would be in that pack on our backs. As they say, “you pack your fears.”

On the morning of March 4, 2022, we lugged our packs upstairs, hopped in the back seat of the Duncans’ van, and headed for Denver International Airport. San Diego awaited as our hopes and excitement preceded us to California towards the PCT Southern Terminus.