The 4 Major Differences Between the AT and the PCT

Check out our brand new resource for thru-hiking the PCT, Pacific Crest Trials.

As a 2013 AT thru hiker, just over a year has passed since my last day on trail and already I feel the pull. Many of us leave the AT with dreams of another trail but instead return to jobs, school and  normal life again. Still, the restlessness is always there and becomes stronger and stronger.. I feel it now and it has lead me to do some extensive researching for the Pacific Crest Trail, the west coast brother of the Appalachian Trail. The PCT, which was completed in 1993, runs from the Mexican border in California through Oregon and Washington, ending in Canada. It is an entirely different beast than the AT, with the most stark contrasts covered in this article. For those of you interested in another bout with trail life, read on!

The 4 Major Differences Between the AT and the PCT

The most obvious difference between the AT and the PCT is the terrain. The AT more or less travels through deciduous forests for the majority of the trail. At times you pass through cattle fields and cropland. The White Mountains introduce you to the coniferous forests of the alpine regions and Maine takes on its own special identity. Still, for the most part you do not see an extreme change in the terrain types. Trees, trees, and more green, luscious trees.

The PCT, however, begins in the Mojave desert; limited water, cacti, sage brush, the occasional sightings of Roadrunner and Wiley Coyote (Okay, that last part is not true). The desert then fades into the Sierra Mountain Range. The High Sierra, being an alpine region, nearly always means snow for hikers (aka, post-holing up a pass and glissading down); a vast change from the heat of the desert not far behind. Oregon and Washington then usher in the Cascade Mountains, which are considered a temperate rainforest. Desert to glaciers to rainforest. That is radically different than the green tunnel syndrome on the AT.

Having so many different types of terrain on the PCT also means having to adapt to more extreme changes in climate while hiking. The desert is blistering hot during the day and but temperatures drop significantly as the sun goes down. Snow pack in the Sierra Mountains is erratic and varies greatly between each year. Due to elevation changes, one can easily sleep in the valley every night, making contact with the dirt, and yet spend all day hiking through snow. The weather in the Cascades can be unpredictable at times. All of these elements leave you on your toes.

On the other hand, the AT usually does not have drastic enough changes in elevation as to have such a strong change in climate throughout a single day. Still, the changes in weather can bring about a wide range of possible situations on must be prepared for. The AT is notoriously more rainy than the PCT and in the mountains, a simple thunderstorm can easily come equipped with loads of lightening and large hail. Not a fun place to be taking in the views from a high ridgeline.

Because of the changes in both climate and terrain, a change in gear is needed as a result. Items that are usually considered unnecessary on the AT become essential safety items on the PCT. An ice axe and crampons for the High Sierra are many times crucial to have. A GPS can mean the difference between guessing where the snow covered trail leads and knowing you are headed in the correct direction even if you see no trail below you. A bear canister is required while walking through most of the Sierras.

On the AT, the trail is very evident unless an uncharacteristically heavy snow has fallen and while crampons are a very helpful at times, carrying a tool such as an ice axe for self-arrest is over doing it. Generally speaking, thru hikers on the PCT go to extreme lengths to cut down on their pack weight. While counting ounces is important on the AT, most typical AT packs weights are more than that of what you would see on the PCT. Even the most popular packs on the PCT are themselves from ultralight brands such as Gossamer Gear and ULA instead of Osprey or Gregory, as seen on the AT. Still, gear choices always vary heavily from one hiker to another.

Not only does the extended length of the PCT (500 miles longer than the AT!) change the way you approach the trail technically, but the way the trail is graded does as well. On the PCT, you essentially have the same amount of time (six months) to put down more miles (just under 2,700 as opposed to just under 2,200) than on the AT. This calls for higher mileage days on the PCT than most consistently keep up on the AT. But the PCT is graded for pack mules, whereas the AT was built with no such intentions. This means many of the climbs on the PCT are not as brutally steep as on the AT. Though, keep in mind those miles in the High Sierra, you are crossing those mountain passes at a time when pack mules would be steering clear. “Graded for pack animals” is to be taken as seriously as “Virginia is flat”. It in no way translates into “cake walk”. The PCT also requires a fair amount more mandatory planning, mostly in regards to mail drops. On the AT, there are several places along the trail at which it would be advantageous to send yourself a mail drop, but not totally necessary. On the PCT, hitches into town are longer and less populated, making mail drops a more vital part of resupply than on the AT.

You will experience beautiful places with wonderful humans and share the joy of the hiker trash lifestyle with all you meet!!

Other Hikers, Weighing In:

In gathering all this information, I mainly spoke with thru hikers of the PCT whom I have met or were referred to from AT hiker pals. Personal experience of others helped me the most in preparing for the AT so I applied that technique here. Of the hikers I spoke with, those who have thru hiked both trails seem to agree that the PCT is physically easier despite the higher mileage days. They also agreed that the PCT is more mentally taxing than the AT. The AT is more draining on the body but the social aspect and more consistent trips into town keep the mind and spirit healthy. The PCT has a way of wearing down the mind before the body, but all the hikers said that the beauty of the PCT was much greater and more inspiring than the AT. 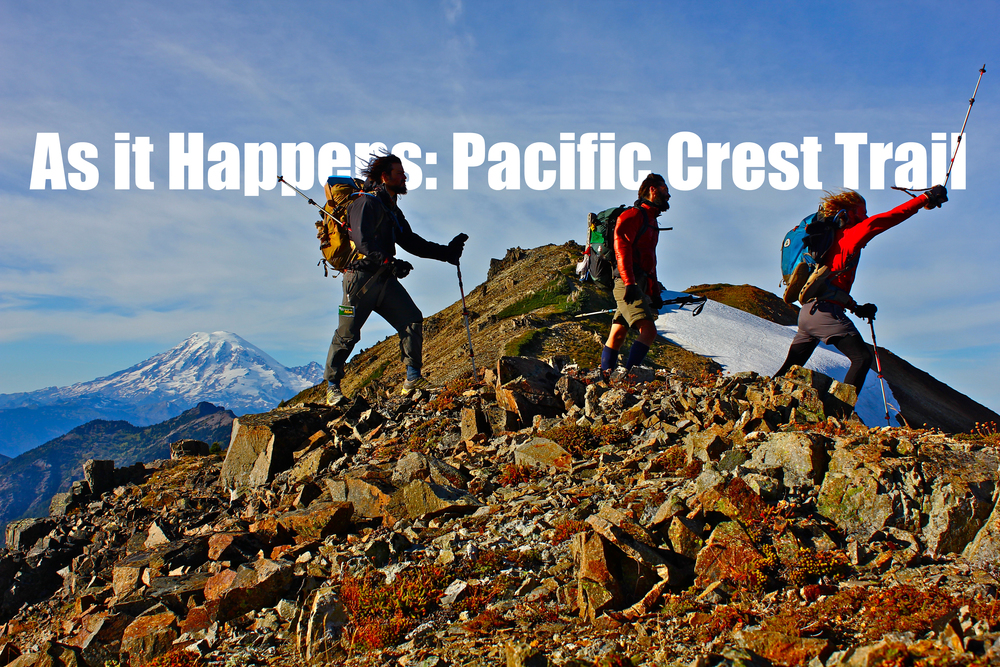 Real life AT thru hikers turned real life PCT thru hikers, Andy Laub and Ian Mangiardi, made a stellar documentary following their thru hike of the PCT in 2011. As It Happens is visually beautiful, tells the honest story of a thru hike and also inspires all who watch it.  Ian and I spoke at length during my information gathering period and he helped shed light on much of the above content despite a busy life full of things that are much more interesting than talk to me. He is the Expedition Manager for his own company  (Modern Explorer, Inc.) and has been recently working with the royal family of Bhutan on a fascinating project that combines wilderness expeditions with an incredible personal look into the culture of Bhutan. He’s a gentleman and a scholar and a pretty interesting dude, too! Thanks for the help, Ian!

Hiking the PCT in 2017?  Have your journey featured right here on Appalachian Trials.  Find out how here.