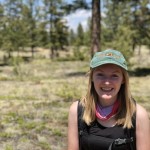 A 16-Question Interview with a 2021 NOBO PCT Hiker

Remember a long time ago when I described how, until recently, I “let” my friends do basic backpacking chores for me, like filter water, use a Jet Boil, and carry our bear bin? Worry not – I have reduced my mooching ways, both out of necessity for solo section hikes of the Colorado Trail and simply to be a better person.

The point is, my friend Kara is one of those friends. She has many a time painfully injured her neck and back after (generously) carrying a bear bin stuffed with four people’s food. One of the coolest things about Kara is that she is going to thru-hike the Pacific Crest Trail this year.

I, along with our friend Taylor, sat down for a virtual interview with Kara the Nearly Thru-Hiker for a brief 16-ish question interview about all things PCT anticipation. 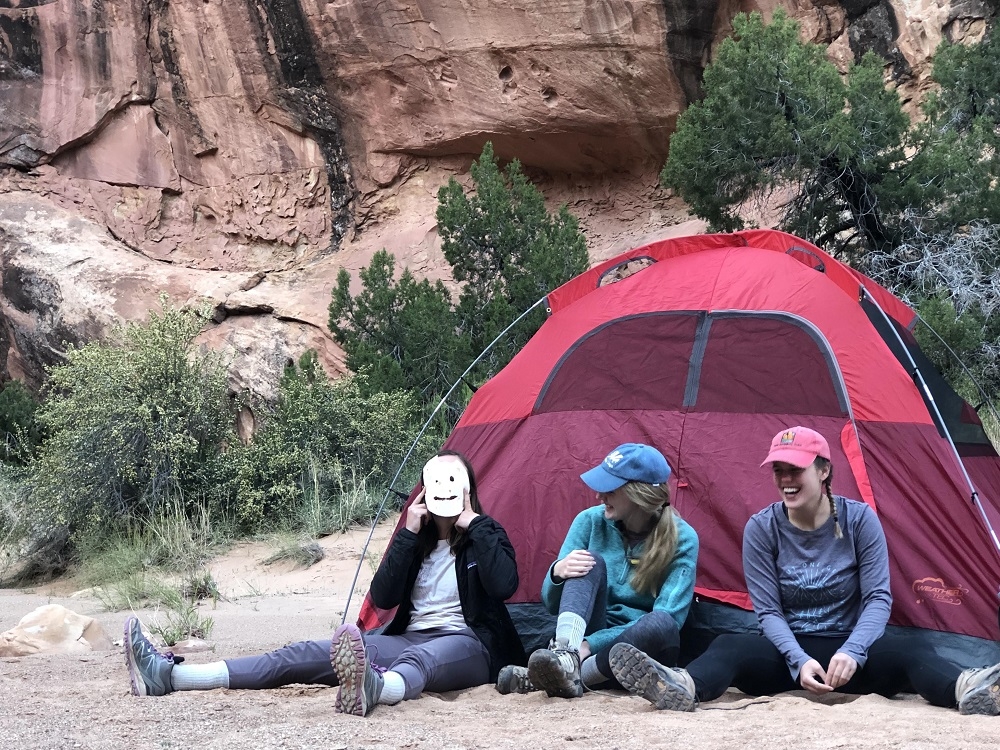 Taylor, Rachel, and Kara with their 48 pound tent in the backcountry. Taylor wished to remain face anonymous.

Rachel (me): What’s your timeline and direction?

Kara: I’m walkin’ north, starting the first week of May. My only hope is to finish before October when the likelihood of bad weather increases. Oh my god! There’s hair in my queso! :stares into bowl of queso:

Rachel: What are your big three?

Kara: My tent is a Copper Spur UL 1. I got it at an REI Garage Sale a few years ago. It’s not the lightest around for thru-hiking, but I’ve car camped with it for years and love its features and how easy it is to set up.  For my sleeping bag, I just got an Enlightened Equipment Revelation 10-degree quilt. The first night I tested it was a bit drafty, but since then I’ve tested it camping in 30-degree weather and was plenty warm. What’s the other one? My pack! I ordered a waterproof version of the ULA Circuit but ended up having to switch my order to the regular version. I’m honestly happier this way because it’s cheaper. I have not tested it out yet…do you want to see the hair in the queso? :shoves bowl of queso towards the camera: 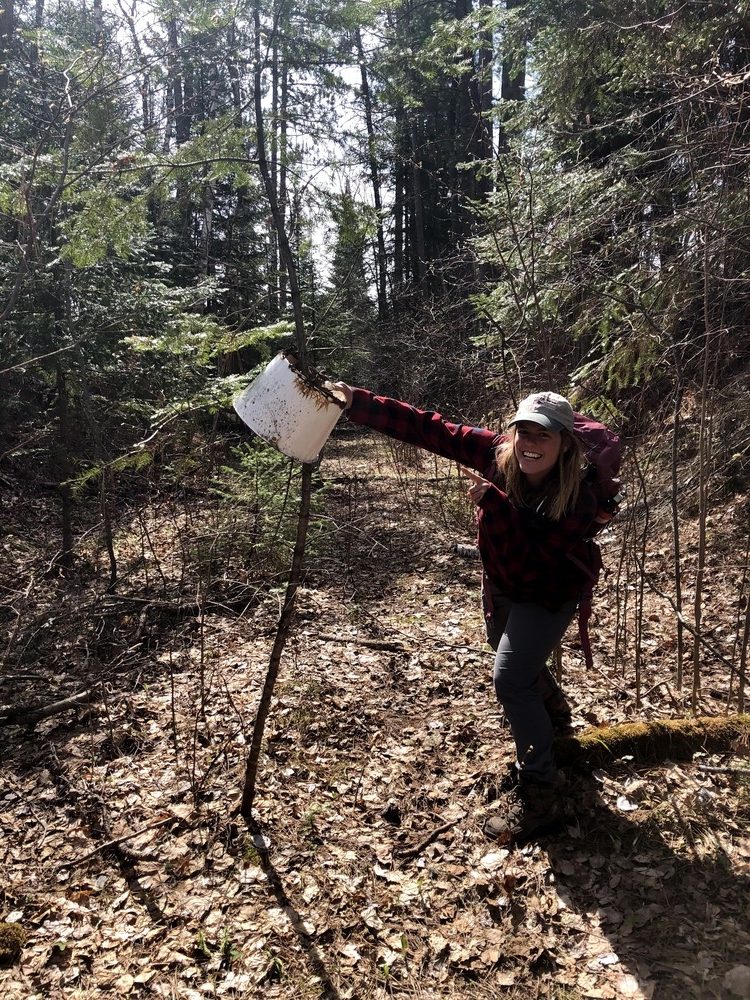 Historic trash on the trail. The bucket, not Kara. Kara is still a few years away from becoming historic trash.

Rachel: Tell the good readers how you’ve set up your life and schedule to fit in the PCT.

Kara: The biggest factor is that I’ve worked seasonal outdoor jobs for the past year – so it’s much easier for me than someone with a full-time job. My previous job ended in November and for the winter I specifically picked a 6-month position that ends late April, which is the reason for my somewhat late start date.

Rachel: What does your family think about your hike?

Kara: Both of my parents are very supportive. My mom is a lot more relaxed than my dad; she’s mostly worried about the river crossings, but he’s the one who insisted on buying my Garmin InReach, if that explains anything. He’s also very adamantly against me hitchhiking alone, which I don’t plan to do or want to do, but…if it’s gunna happen, it’s gunna happen.

My grandparents are also very excited for me. The gear item I’m most excited about is my grandma’s old Girl Scout knife from when she was a kid. She gave it to me for Christmas and I’m really honored to carry it on the trail with me. Even if the knife itself is a bit heavy by backpacking standards.

In general, my family seems more chill compared to others. I’ve made a lot of unconventional decisions in the past year or two and my parents have been very supportive. I’m very appreciative. They’re good eggs.

Rachel: I heard you’ve been having ankle problems. What’s that about? How are you preparing physically for the trail?

Kara: Last summer I walked a bunch of miles every day for my job – after about two months, I got this bad pain in my ankle. I then ignored it for another month and a half, until people told me it was actually pretty serious. But when I went to see the doctor, they said it wouldn’t get worse. Once I got a new job with less walking, I wasn’t as worried about it because the swelling and pain had mostly gone away. But, my injured ankle never really felt the same as the other one.

In preparation for the PCT, I figured I’d get it checked out “one last time” and maybe get some physical therapy exercises to work on. But then the foot doctor said I needed surgery. I said “no, no I do not, I’m fine.” I went to see a second doctor, who said “yes, you need surgery.” So a week later I got surgery!

This was the beginning of February. I had a boot for two weeks, Rachel was my amazing wonderful nurse and I lived at her house for a little bit. Since then, I’ve been doing PT ever since, got cleared to start hiking again, and have been slowly adding mileage and pack weight.

I’m not where I’d hoped to be in my training at this point, but I told my doctors I want to hike 20-mile days, multiple days in a row, by May. They are more confident than me right now. But even if I need to start slower and take more zeros, I want to start, and I’ll adjust my distances as needed.

Rachel: On that low note, what are you most nervous about? 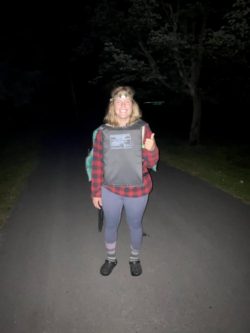 Taylor: Do you think you’ll have to skip sections for fires?

Kara: It definitely could happen. That would be a bummer, but I’m not exactly nervous about that since it’s out of my control.

Taylor: I haven’t done much research on the PCT.

Rachel: What are you most excited about?

Kara: It’s hard to pick just one thing. I’m definitely excited to eat a bunch of junk food. VERY excited for that. Food with no regrets. I’ve also always wanted to see the national parks in California, so I’m excited for that new scenery. I’m excited to make a bunch of interesting friends.  :Rachel and Taylor cough: I already have interesting friends, but I’d like to hopefully make some new ones too.

Lastly, I’m excited to have a daily routine that is only walking. When you talk about thru-hiking, it’s usually about abandoning an old, unhappy routine. But I see it as a new routine, and one I’m excited for. Doing the same thing every day, and it’s the thing that brings me the most happiness in this world. 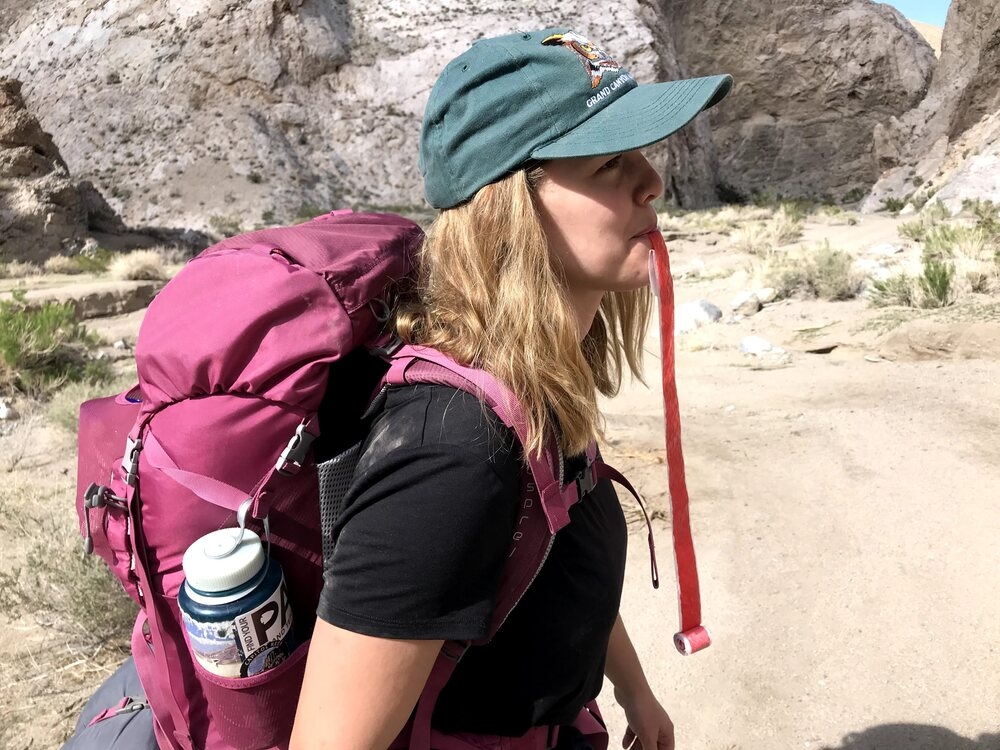 Taylor: Do you plan on eating even one thing that’s healthy?

Kara: Uhhhhhhh. Does bagged chicken count? I plan on putting chicken in my dinners.

Taylor: How often are you going to shower?

Kara: As little as possible. I already shower very infrequently so I want to go for my record number of days between showers. Actually, that might be one of the things I’m most excited for.

Rachel: Why are you hiking?

I hate this question. I don’t have a good, insightful answer. My reasons are simple. Hiking is the activity that brings me the most happiness, so doing it for six months sounds great. It’s been on my bucket list and it works with my schedule, so why not? I’ve started to put more emphasis on collecting new experiences, rather than collecting jobs or money, and this fits. I’m excited for a super hard, challenging, outdoor experience.

Taylor: If you had to pick a trail name or estimate what yours might relate to, what would it be? 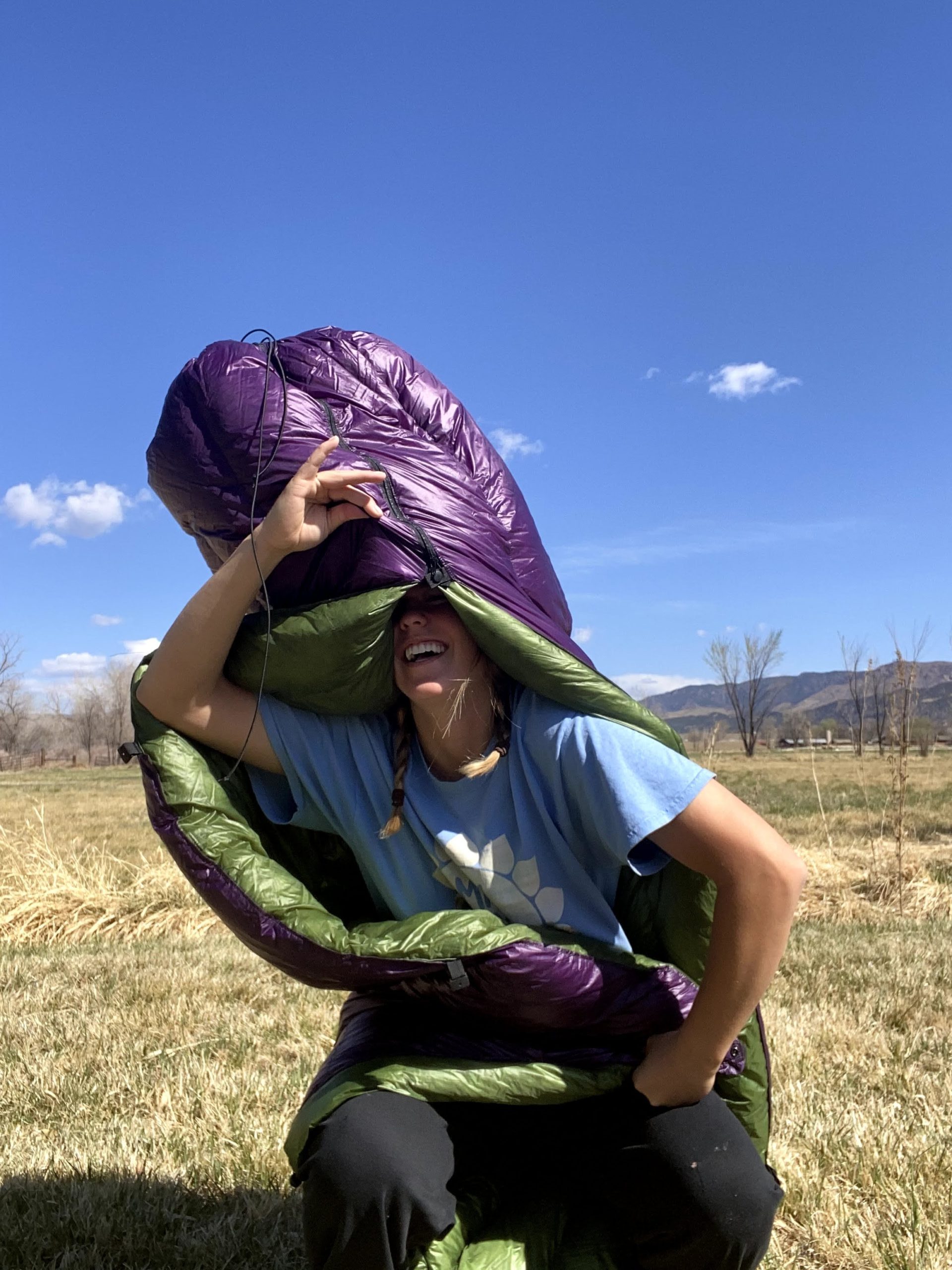 Taylor: Do you plan to top the PCT with a different, more extreme or more beautiful trail? Will you let the PCT be the best trail of your life?

Kara: I mean, I want to do another long trail, maybe several more. But I don’t want to get ahead of myself. Everyone says your first thru-hike is the best one. So I’ve got to finish this one before making future plans.

Taylor: Are you planning to hike the trail sober?

Kara: What? No. Not at all. Taylor, what are these questions? No.

Rachel: Are you bringing any luxury items?

Kara: My grandma’s knife is my main luxury item since it’s heavy for a knife. I don’t feel like I have any other luxury items, but then there are people with a 7-pound baseweight, so I obviously do. Is my hair brush a luxury item? My hair just snarles really easily.

Taylor: What about a good luck charm or anything you love from regular life?

Kara: No, I’m not very attached to the things I own. Definitely not attached enough to want to carry them on my back for 2,650 miles. 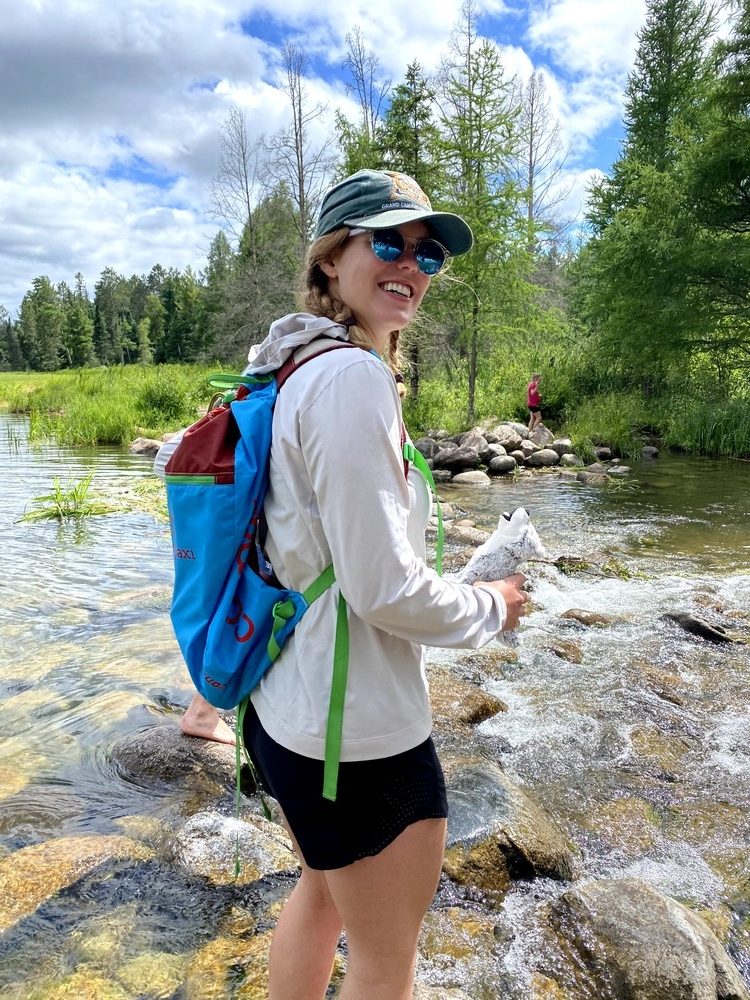 There you have it! A 16-question interview with a bonafide 2021 NOBO PCT hiker. I’m so excited to live vicariously through Kara as she treks across the country this summer, and if you see a lady with an owl hat out on the trail, make sure to say hello. If you have any friendly advice for Kara before she sets off, leave it in the comments!

I'm a Minnesota native currently living in Denver. I've been gradually leveling up my hiking game from short day hikes to backcountry overnighters. I began section hiking the Colorado Trail in 2020 and hope to complete it over a few years. In 2021, I hiked the Tahoe Rim Trail. I love figuring out how to balance my full-time work life with a lot of hiking, camping, and backpacking.